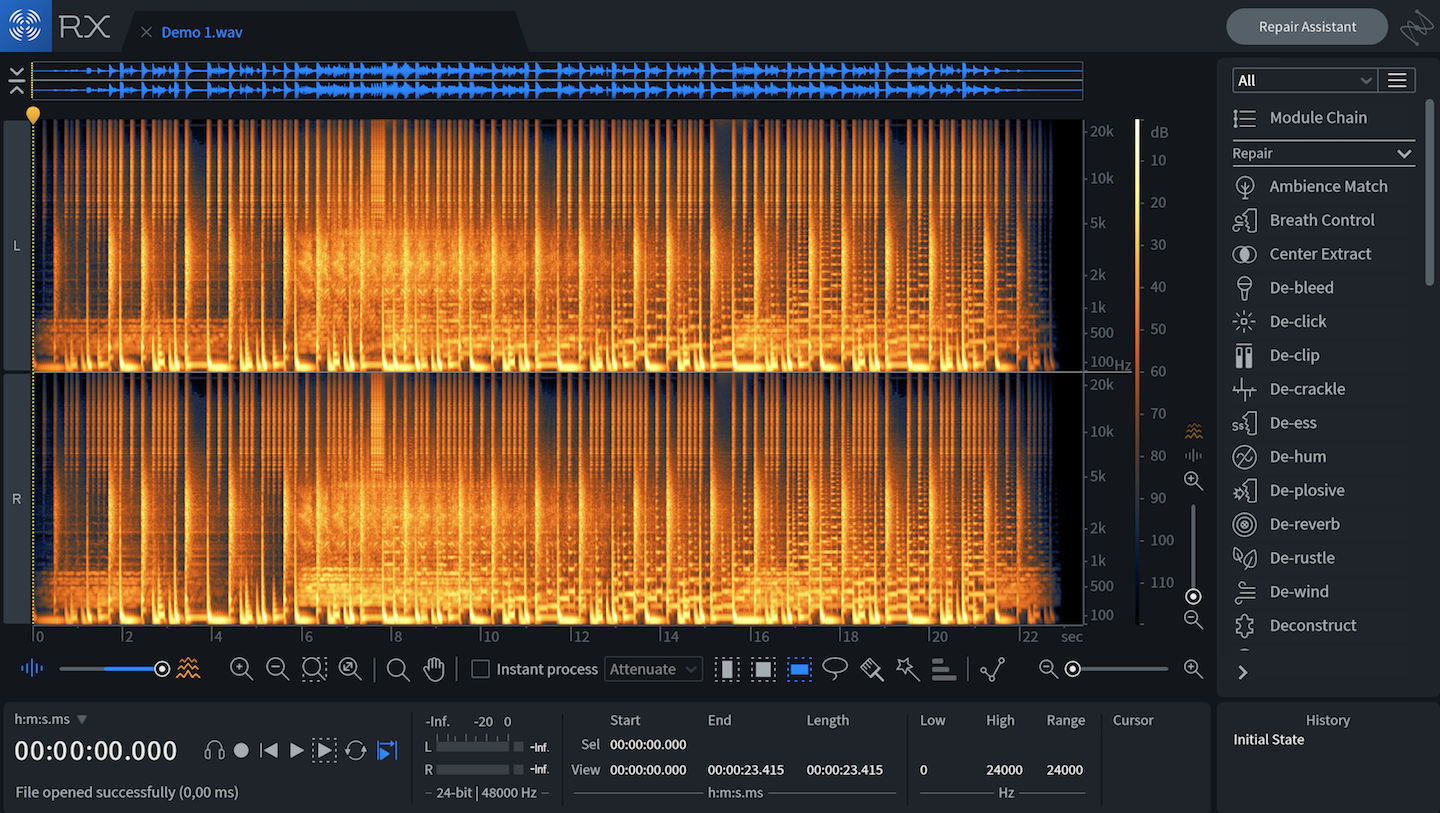 Since it was first released, RX has been at the forefront of audio repair, offering post-production and broadcast professionals a suite of tools to solve some of the most seemingly impossible restoration and enhancement challenges.

It has also found growing use in a music production context to fix and manipulate audio beyond what is feasible with a traditional EQ. While sometimes all you need to shape a sound is a quick high-pass, there are many situations where more surgical adjustments are required and RX 7 is a better choice. So without further delay, let’s look at seven times RX 7 beats using an EQ.

Despite your best EQ efforts, hum often refuses to exit a recording without taking other important parts along with it. For low-end tones from refrigerators and other home appliances, attenuating between 30–70 Hz is a good starting point, but this kind of cut also deadens impact, especially in more beat-based material. If you need to clean up the mid-range hum of an amp, a cut between 500–800 Hz will handle the interference but smudge important details at the same time.

Enter the RX 7 De-hum module, which identifies the base frequency and harmonics of hum and buzz and removes them without affecting the desired parts of the signal. De-hum, as well as other modules like De-clip and De-click, are built into Repair Assistant, RX’s intelligent repair tool, which can help you identify and solve common audio issues on your tracks.

If you record dialogue outdoors, you know that wind can be a major barrier to capturing a clean recording. Whenever wind comes into contact with a microphone it leaves a low-frequency blotch that obscures voices and damages quality.

Like hum, wind can get lodged in a recording at more than one frequency band, making it a frustrating noise to remove with EQ. And since dialogue is usually front and center in a mix, even the smallest interferences can be a distraction to audiences. That’s why we developed RX 7’s De-wind, which makes it easy to remove wind from multiple problem areas of a recording while retaining vocal intelligibility. Here’s how:

Sibilance refers to the high-frequency noises that come from vocals and dialogue including the letters S, F, X, and SH. Some performers are more prone to introducing sibilance than others. Microphone choice, as well as effects like compression and distortion, can also contribute to the problem.

For those who are new to vocal production, the first response is to dampen these nasty little sounds with EQ. After all, that’s what EQ is mostly used for—taming unpleasant frequencies. But because of the natural variance of the voice, sibilance changes in intensity and frequency throughout a recording, meaning a “set-it-and-forget-it” EQ won’t do the trick. Yes, you can split each word with sibilance to a new track, but this creates a ton of editing work and sometimes artifacts as a result of the switching between regions.

For these reasons, we recommend using the De-ess module in RX 7, which isolates the sibilant frequencies in a vocal and removes them in a single click. Based on how often the issue occurs, you can grab and process single words and phrases individually for more natural-sounding results, or take care of an entire recording at once. Read more about de-essing tips and watch this De-ess tutorial video below:

Unfortunately, vocal editing doesn’t stop at sibilance—clicks, pops, loud breaths, and other weird sounds almost always crop up in dialogue and vocal performances. A quick scan through other blogs and forums for solutions to these common problems will suggest a combination of volume automation, fades, and EQ. These suggestions can work, but are very “manual” approaches that require lots of focus over long periods of time to complete thoroughly. By the time you make it to processing and mixing, your energy is already spent.

We’ve developed a range of tools to fix common vocal recording gaffes, including:

Like the other modules mentioned so far, these three also operate on a search-and-find basis, quickly (and automatically) identifying specific issues in your vocal recording and giving you the option to reduce or fully remove them.

Isolating stems from existing music without artifacts has long been a problem for sample-based musicians, remixers, and labels looking to put out re-masters. Until recently, the only real option was to use EQ with a heavy hand, but this rarely produces desired results. The bass doesn’t separate from the kick, the synths don’t split from the percussion, and the vocal always ends up carrying some additional phasey artifacts.

With the Music Rebalance module (new to RX 7), you can identify vocals, bass, percussion, and other instruments in a mix and individually enhance, isolate, or remove them—giving you previously unheard of control over pre-existing music.

Maybe you’re thinking of giving away the stems to one of your tracks for a remix context but have lost the original file. Or you want to put together a bootleg for a club set but can’t find the isolated parts online. Perhaps you’ve been tasked with restoring old recordings where instruments are buried in the mix and need brightening. Learn how all this and more can easily be done with Music Rebalance:

Crackle is present in everyone’s favorite sample material: vinyl records, especially the really old ones. Unless you are going for a distinctly lo-fi sound, you generally want to remove crackle in a music production context. This proves a challenge with only EQ, as crackle has a bad habit of getting tangled up with the parts of audio you want to keep.

The aptly titled De-crackle module steps in as a solution. This is ideal for producers who want to brush off a little dust from their vinyl samples, or for record junkies looking to make pristine digital versions of their collection. Some recordings also contain consistent background noise that isn’t exactly a hum or click but rather a more sandy texture, and this is where De-crackle saves you time.

“Unuseable” will mean something slightly different to every producer. For this section, it has to do with sounds and noises that interrupt a live recording or audio file. For example, squeaky guitar strings that sound whenever a player moves from chord to chord, a cough in a dialogue take, wrong notes, animals calls from outdoors, etc.

EQ and basic editing can resolve these issues if they occur during silent sections, but we are not always this lucky. Unwanted sounds can occur during important musical moments and ruin an otherwise perfect take. Instead of having to scrap a recording and start over, the Spectral Repair module allows you to select the undesired parts and replace them with information from outside the selection, ensuring the sound is removed without a gap left behind. Learn more about Spectral Repair below.

There’s no denying that EQ has an important place in music production. But the next time you find yourself scratching your head with a recording that is overly noisy or marred by inconsistencies, try RX 7 instead and see how it works. It might just be the secret ingredient you need to shape your tone.