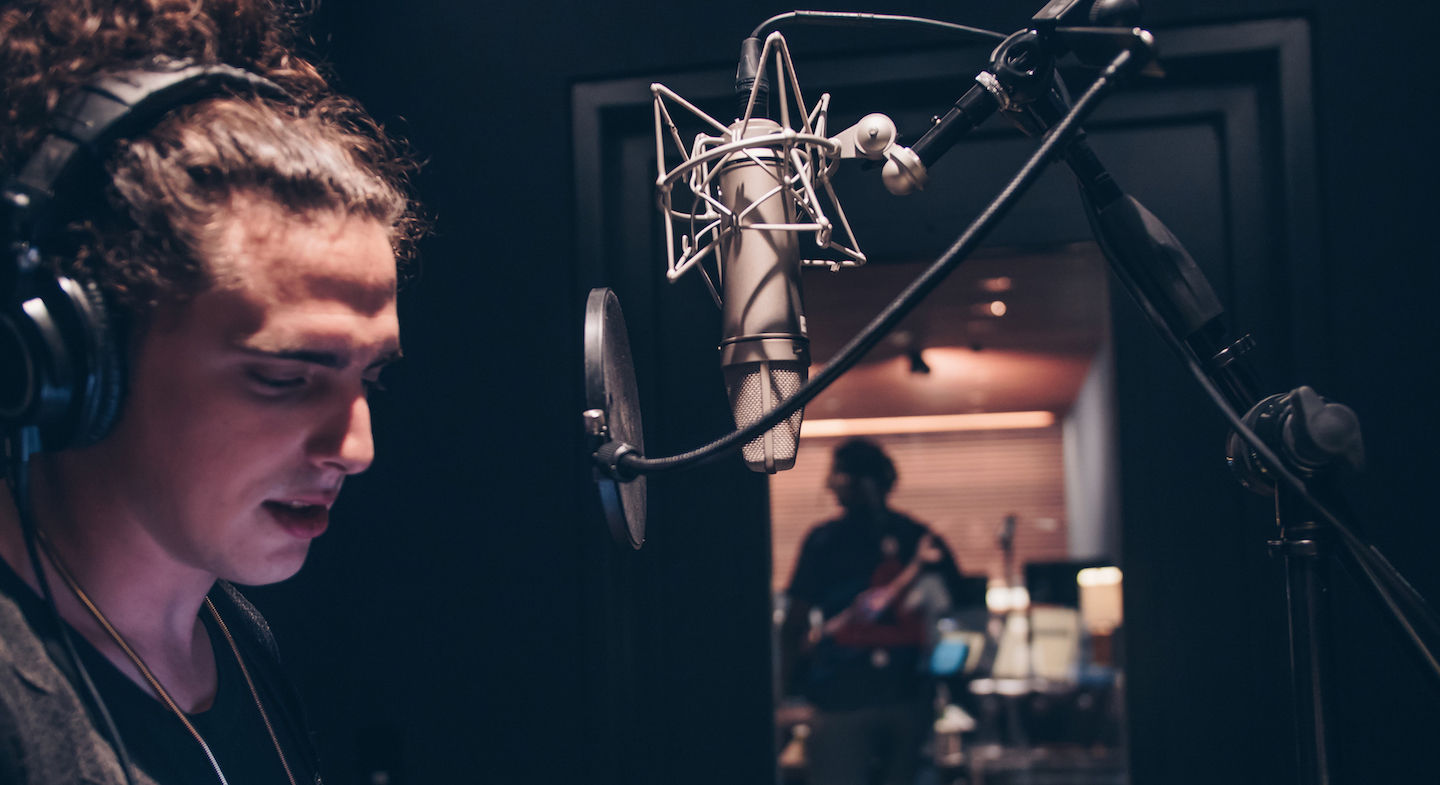 This article references previous versions of Ozone and Neutron. Learn about the latest Ozone and its powerful new features like Master Rebalance, Low End Focus, and improved Tonal Balance Control by clicking here.

For mixing engineers and producers alike, it pays to become intimately acquainted with the virtues of automation. Swooping sounds from left to right, enhancing emotion with level boosts, or fixing complicated problems with real-time adjustments—all of these moves separate the quotidian from the marvelous when mixing music.

But riddle me this: how often do you think about automating EQ? Perhaps not as often as you should, for automating EQ can create both dramatic and transparent effects. Whether creating something truly bespoke for your mix, or cheating an element forward/backward for the master, a bit of active, automated EQ sculpting can be a serious boon, if done well.

Here are some instances where you can employ the practice.

1. To bring out an element that needs momentary emphasis

In mixing, we often automate levels for instruments that need to be emphasized for short periods of time. But sometimes an automated boost of EQ can serve your purposes with more transparency than mere volume automation.

Let’s imagine a guitar part, one that handles the rhythm most of the time, but transitions to a solo during a lead break. Left to its own devices, the track isn’t popping enough for the solo. However, no straight decibel boost is doing the trick: a decibel is too little, and 1.5 dB is too obvious—too much like a cheat, an obvious hand on the fader.

What about a small, wide boost in the high midrange, clicked in just for the duration of the solo? This could be the ticket, especially if done with a neutral sounding EQ. Suddenly the guitar is more forward, though without calling attention to itself.

This technique can also come in handy during the mastering process. Let’s again the same scenario with one important difference: you’ve only been given a stereo track to master, and a remix is not possible.

What’s the play here? It could be a slight level boost of 0.5 dB or so, but if that isn’t working for you, try a wide, small boost in the frequency range of the guitar, instantiated only for the duration of the solo. If that affects the supporting harmonic elements on the edges of the stereo field, try clicking in this band in M/S, leaving the sides be and putting a small boost into the mid-channel. Click it out again when the solo is over, and you can subtly, momentarily emphasize an important moment of the mix. Luckily, all of this is possible with Ozone 8’s EQ, which boasts M/S functionality.

2. To take out a momentarily troublesome resonance

Think of the previous example and imagine the opposite: you’re given an element or mix that has momentary problems in certain frequency ranges.

Let’s examine a mixing context first. For some reason, the electric bass always comes to mind when I talk about this problem, probably because of the instrument’s architecture; if it’s not set up correctly, with the pickups calibrated just so, and the action-height exactly right, sometimes a particular note can leap out. Don’t discount the player’s technique either: digging into the strings creates a markedly different timbre from a soft pluck.

Imagine that a couple of bass notes “bloom” unnaturally over the course of the song. Sure, you can stick a dynamic EQ centered around the notes giving you trouble, but mayhaps this creates a new problem: the all-too-resonant bass notes only bloomed a couple of times. The dynamic EQ, however, takes too much of the resonance out of the signal all the time. What do you do?

Automate a parametric cut! It works wonders. Wait for the moment, click in the band, and then click it out. The same technique works in mastering scenarios, though as a rule, you should keep these affectations as subtle as possible, so as not to introduce obvious changes in overall timbre, or weird phase-shifts.

Now’s a good time to mention that sometimes, I’ll have a second EQ in my chain for the express purpose of EQ automations. In a suite like Ozone 8 or Nectar 3, you’re given the opportunity to insert multiple EQs, so you can do this straight from the same plug-in.

3. For front to back panning

In conjunction with automating a reverb, you can automate EQ to create front-to-back panning effects. You see, the level of room reflections isn’t the only factor in creating spatial distance. Depending on the ambiance you’re trying to create, EQ also makes a difference: a sound loses its high end as it moves farther away. If the sound is traveling in doors, it tends to lose some bass content too, though not necessarily all of its subharmonic content (you’ll note that what you hear in your house with a neighbor’s party music is too loud is usually the bass information).

Imagine a swirling synth moves from right to left in the stereo spectrum; once it’s on the left, imagine it moving farther and farther away from you. You can achieve the change in depth with an automated high-shelf: take it down in level and frequency over time. Couple this with a wide parametric cut in the lows/low-midrange. As the sound moves farther away in depth, gradually you perceive more midrange than anything else, with a bit of subharmonics in the signal too.

This EQ automation, paired with subtle shaping of ambient parameters (early and late room reflections, for example), creates the effect. It is made possible in no small part with EQ automation. The reverse of the process can also be dramatic—bringing a sound closer to you over time. Start with more of a midrange sound, and gradually bring in its high end and low/low-mids with automation. Increase level, decrease room reflections, and you have a sound that pushes its way towards you dynamically.

If you’ve got the time and the ear for it, you don’t need a dedicated filtering plug-in to create dramatic resonant filters or wah-wahs. You can create your own effects by automating an EQ.

Try this: Instantiate a parametric boost, and then put your DAW into latching mode. As the track plays, move it around dramatically from lower to higher frequency centers, then back again. Note the timbre you’ve created—it should change dynamically, as an auto-filter might. Pair this with a complementary moving low- and high-cut filters for more of a wah-wah effect, if you’d like.

Doing this process with EQ, rather than with a dedicated plug-in, may also have advantages for fastidious engineers: you can control exactly how, when, and by what degree each change in frequency occurs, aligning everything to your exact predilections.

This technique is also worth exploring in a sort of dual-mono way: if you’ve got a synth or guitar that could use something like a phasing, you can instantiate boosts/cuts in the left channel, and slightly different ones in the right. Then, move them around independently as you see fit.

5. To create a dramatic stereo effect

Recently I mixed a track where the vocalist sang a line about losing touch with reality. The line occurred midway through the second verse. The producer suggested we try something to enhance the subject matter in the mix, and we came up with a dramatic stereo effect that hinged on automation:

The lyric was about losing touch with reality, so we made the vocal lose touch with it used to be over the course of the phrase—and we did this through automation: I automated the level of each boost/cut ever higher over the lyric, until, in a dramatic moment, I pulled it all back to unity gain. I saved that moment for an appropriate line, one about getting her bearings back.

Automating the EQ was paramount to achieving this effect, and the effect really sold the moment. An EQ like the one found in Ozone can work for this scenario, as it has independent left/right options.

6. To cheat the listener into thinking a track has more bass or treble than it does

The principle behind this trick is quite simple: You may want to give the illusion of deeper bass or brighter trebles, but that way lay problems. Too much low end over time can eat up your dynamic range, while too much high-end can lead to ear fatigue.

Let automated EQ come to the rescue! Introduce the frequency you want to be emphasized, and take it away over time. If done properly, the brain can supply the missing information.

Take a bass synth for example. We can keep it very bass-heavy at the beginning of a tune, and then ever-so-gradually bring down its low-end when the kick really gets going; if mixed well, the tune will still retain a bassier feeling, even if the signature bass element has abated somewhat.

The same principle can apply in a mastering context. Say you really want an intimate, breathy feeling in the intro and verse, but if you add a dB of high-shelving, it becomes too much by the time that heavy chorus rolls around. One way around this is too sneak off this high-shelf as you approach the chorus, bringing it subtly back to unity. It can also work to have the shelf simply bypass on the downbeat of the chorus, to avoid any transition period. The specific implementation really does depend on the material.

This can be a powerful approach if done well. Let the natural change in the mix from soft to loud, from spare to busy, hide the subtle automations you’ve made, and you’ll aid in the mix’s apparent brightness without causing overt ear fatigue.

Now comes the general disclaimer: be careful when automating EQ. While the effects can be palpably beneficial, you must always remember that nothing happens in a vacuum, and every miracle has its price. Any EQ choice you make affects further downstream processing, so if you tweak the EQ on a guitar, you may change how it may hit its corresponding compressor—which could change how it hits any processing on the submix, which could, in turn, affect any stereo-mix processing. Stereo automations could likewise get out of hand, messing up mono compatibility if taken overboard. And everything you do in mastering process involves a little bit of compromise: boosting high-mids to make the guitar solo cut more? You may be bringing out anything from snare crack to kick click with it!

Proceed, but with caution. Be bold, but be reasonable. Make compromises for an uncompromising mix. In other words, automate EQ as you’d enact any other process: with an eye on the fine details, the big picture, and the maximum sonic reward.