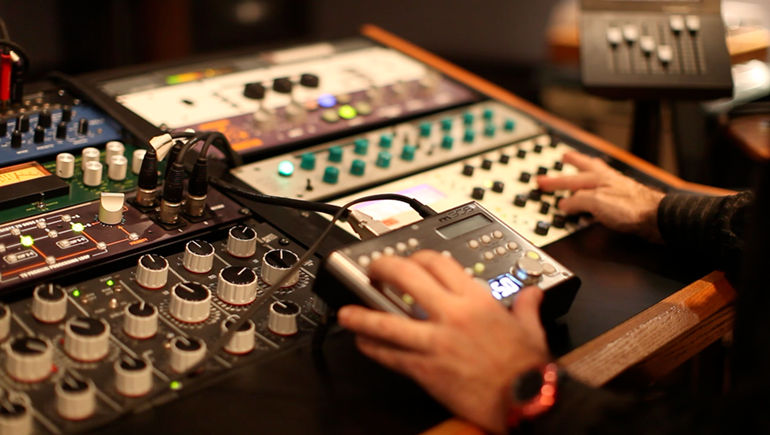 You’ve just finished mixing what you think is an inspired killer track. Maybe your best yet! The high hat sparkles, that synth melody that came to you in the shower fits perfectly, the bass is really pushing, and the overall mix sounds great.

You export your file and add it to a playlist, yet when you hear it played next to a track from your favorite artist, something feels flat, shallow. You find yourself reaching for the volume knob when your track comes up, then turning it down again when it hits something from another artist, and overall it just sounds...off.

It’s lacking something those tracks have, even though it had sounded great pumping through the studio speakers, and you can’t help but wonder, “What’s wrong with my recording?” More often than not, the answer to that question is that you need to unravel the mysteries of a dark and mysterious art: mastering.

Audio mastering has what could ultimately be considered a simple goal: to prepare an audio recording to head out into the world and to make sure it sounds great.

Like anything, though, it can get a bit complicated, especially when you consider all the common problems you might be feeling when you compare your tracks to others in your music library:

Turning it up or mixing down at a higher level doesn’t solve the problem. Yes, that makes it sound louder, but doesn’t add the required impact or clarity.

It sounds dull or muffled.

Other recordings are warm and deep yet bright and open — all at the same time. You try boosting the EQ at high frequencies, but now your song just sounds harsh and noisy.

The instruments and vocals sound thin and lack the same sense of fullness that your favorite recordings have.

You patch in a compressor and adjust some controls, and now the whole mix sounds squashed. The vocal might sound louder, but the cymbals have no dynamics. It’s fuller… and lifeless.

The bass doesn’t have punch.

You boost it with some low-end EQ, but now it just sounds louder and muddier, not punchier.

The overall song seems narrow, even though you can hear all the instruments in your mix and they all seem to have their own “place.”

Other recordings that you compare to have width and image that you just can’t seem to get from panning your individual instruments around.

It sounds like several instruments in several spaces, despite having reverb on the individual tracks.

Your other reference material has a sense of cohesive space that brings all the parts together, a “spaciousness” that works across the entire mix, but your track is lacking.

“How do I fix my recording?”

Mastering is a process that can take recordings to the next level — with a bit of practice, educated listening, and hard work. It might be the process that can address the problems you hear when you compare your output to the albums and tracks that inspired you to begin with.

But mastering is not a substitute for good mixing or good arranging. It can’t fix the issues that arise from a sloppy mix or a lack of attention to detail, and it can’t fix a half-arranged tune. Powerful and full-sounding records are the result of a combination of good writing, arranging, mixing, and mastering — and the sometimes subtle ways that those stages influence each other. Great tracks are carefully made to sound great from the get-go, not just at the end as a way of making up for earlier flaws or rushed stages in the creative process.

Once you’ve reached the final step of mixing music that represents your best efforts all along the way, that you are proud of, only then is it time to dig in and see how much further mastering can get you toward the sound you hear in your mind’s ear.

You won’t become a pro mastering engineer overnight, but you can make dramatic improvements to the quality of your mastered recordings with a little work—and there are a lot of great learning resources available.

In the end there are no right answers, no wrong answers, and no hard and fast rules. However, there are some well-known principles of audio production and mastering that are worth thinking through as you experiment.