Ever since the 1950s, double tracking vocals, whether manually or artificially, has been common practice in music production, and for good reason.

Double tracking adds richness and character to a vocal, and panning those doubles creates width and depth in a production. Double tracking can give us an emotional lift from one part of a song to another when used at certain sections, and when used on individual words or phrases, the technique can add variety and emphasis.

In this article we will touch on what double tracking is, how we can record or create it, and I’ll share a few tips on how it can be implemented effectively to enhance our mix.

Follow along with the free Vocal Doubler plug-in as well as a free demo of iZotope Nectar, an intuitive vocal mixing suite.

What is double tracking?

Double tracking vocals is the act of recording a vocal part two times (sometimes more), attempting to match each performance as closely as possible to the original, both in phrasing and in pitch. This is done with the intention of combining these performances together later in the mix. Doubles can be panned together adding depth and unique character, or they can be panned apart to add width.

Here are a few different ways that vocal doubling has been used effectively in popular music.

In “Lover” by Taylor Swift, the verses consist of a single voice, however, when the chorus kicks in (0:42), the vocal is doubled and panned center adding new character and excitement as well as an emotional lift.

Seal takes the opposite approach from the previous example. In this case the voice is doubled and panned apart for the first two verses and choruses, until the third verse (1:36) at which point it switches to a single voice panned center. This sudden shift in sonics, along with Seal leaning into his performance at this moment, really packs a punch emphasizing the emotion of the lyric.

Yet another approach entirely is this example by Tegan and Sara. Here they mix up using single vocals, vocal doubles, and vocal harmonies, however, what makes this example unique is that the doubles are performed by a different singer, creating more contrast between the voices, resulting in an even richer and unique sonic quality. It doesn’t hurt that they are sisters and their voices blend well together naturally.

The object of vocal doubling or double tracking is to mimic the original take as closely as possible in both pitch and phrasing. For this reason it is important that the performance you are doubling has been finalized. This means that all vocal comping, vocal edits, and vocal tuning has been completed first.

Due to time and money constraints, it is not uncommon to record doubles, harmonies, and background vocals in the same session if there is time, saving the editing and tuning for later. Although this is possible with today’s modern tools, it does not always make for the best results. This is especially true with vocal harmonies as it is important to sing against a vocal that is in tune.

Pro tip: Print your lyrics and keep track of takes

Have printed copies of the lyrics and keep track of the best “keeper” takes as you go. This will save you time by avoiding the need to sort through a pile of takes later. If you are proficient with your DAW, comp the vocal as you go. You will still need to make some edits and tune later, but this will speed up your process and can save you a lot of headaches down the line.

Let’s take a listen to our original vocal, isolated and with no doubling.

Now let’s listen to the same piece of music, only this time with recorded doubles.

Notice that the vocal has two doubles in the verse panned wide L and R, but in the choruses they’re panned much closer to center.

It’s clear, even with no reverb, that doubling is extremely effective in creating depth, space and is just more interesting overall.

Finally, let’s listen to our full track including instruments and a touch of reverb.

Pro tip: Watch out for sibilance when editing vocals

When editing manually recorded vocals, be aware of breaths and sibilance (s’s and t’s). When out of time they can be extremely distracting, and when in time they can build upon each other and become overpowering. From the doubles, remove the breaths completely with a tool like iZotope RX, allowing them to live only in the main vocal. Also, reduce the s’s and t’s in the doubles with de-essing so as not to clash with the main vocal.

Option 2: Double tracking vocals with processing in your DAW

When attempting to add depth or create space to a vocal that has not been double tracked, iZotope offers some great tools to help us out.

Let’s listen to our example again, only this time let’s create a doubling effect using the free iZotope Vocal Doubler with the following settings. 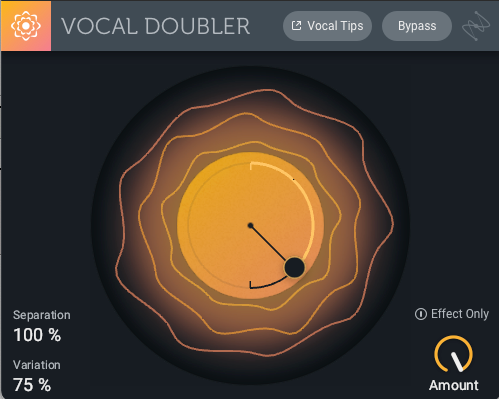 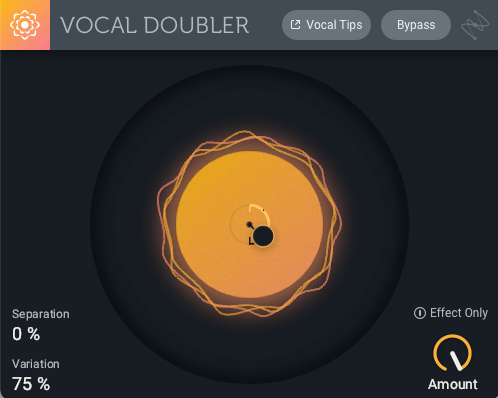 In this example I have attempted to create the same effect as our manually tracked vocal from the previous example. I have created a stereo spread during the verse and a single double panned center during the chorus.

You will notice that it is not too dissimilar from the manually double tracked vocals. However, iZotope Vocal Doubler offers us discrete control over the difference in the timing of the double (with the “separation” control), as well as discrete control over the difference in pitch modulation of the double (with the “variation” control). This means we can cut to the chase and start creating our doubles in the way that we choose without the need to edit them first!

With Nectar we have even more options and more control over our vocal doubles. Nectar allows us to add up to 8 additional voices to a single voice, as well as the ability to adjust pitch as high as an octave above or as low as an octave below.

Just like free iZotope Visual Mixer, we also have the ability to adjust our panning and level graphically. 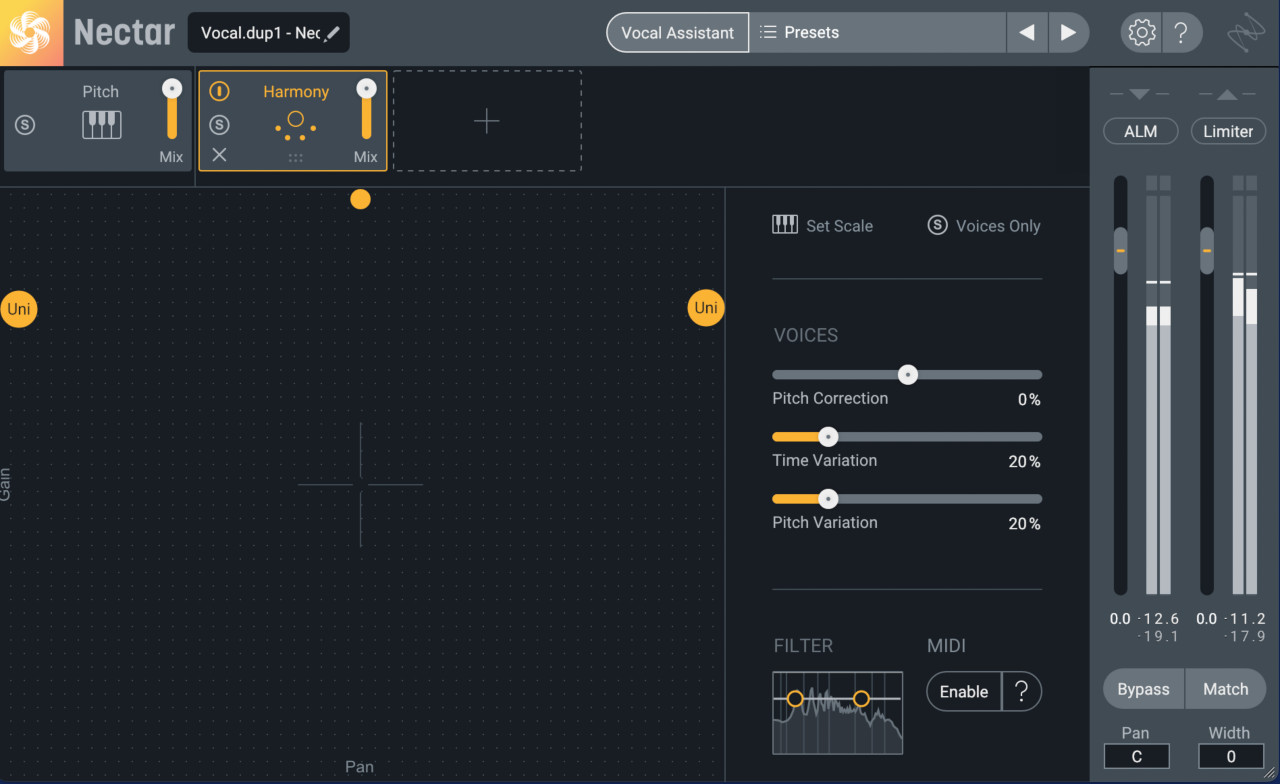 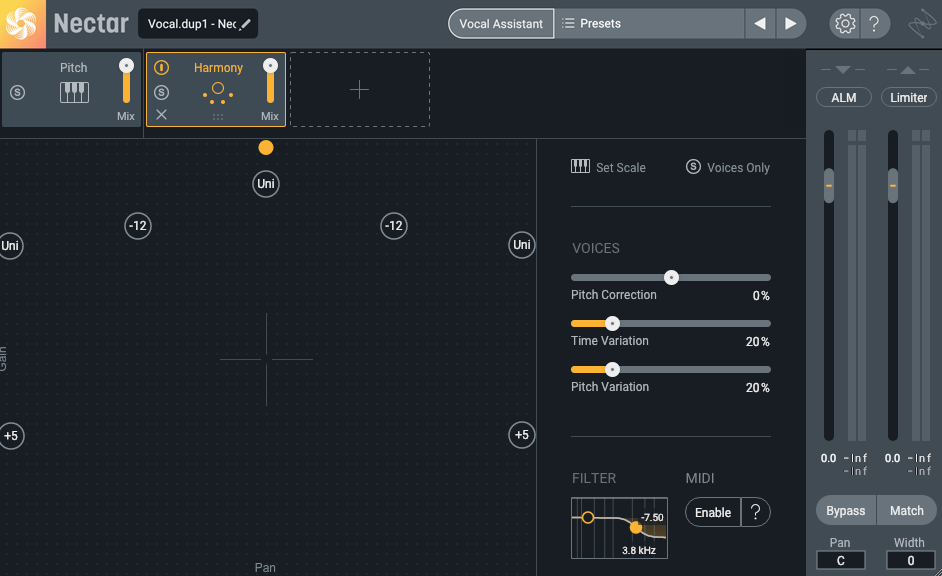 Chorus settings: Doubles in unison, pitched up a perfect 5th, and pitched down an octave in Nectar

Let’s listen again, only this time we will use Nectar to create our stereo doubles for the verse, and do something different for the chorus by adding doubles in unison panned apart, doubles—or harmonies—shifted up in pitch a perfect 5th panned apart, and doubles shifted down in pitch an octave slightly panned apart.

Now let’s listen, only this time, with the full track.

This example is just one of an infinite number of variations that can be created with the Harmony module in Nectar, only one of the 9 modules in total that are available in this powerful plug-in.

While double tracking vocals sounds easy enough, there are some things to be aware of in your mix when you’re mixing vocal doubles:

As always, much of what we do in audio production is subjective. There is no one size fits all and there are always exceptions to the rules. However, one thing is certain, doubled vocals are here to stay, and again with good reason, they sound great! Whether or not they are the right choice for every song is a decision that must always be made, but regardless, it is important to understand them, know how to create them, be effective in using them, and to have the right tools to help you accomplish your goals!

Feel free to experiment with tools like Vocal Doubler and iZotope Nectar to get creative with your double tracking as well.