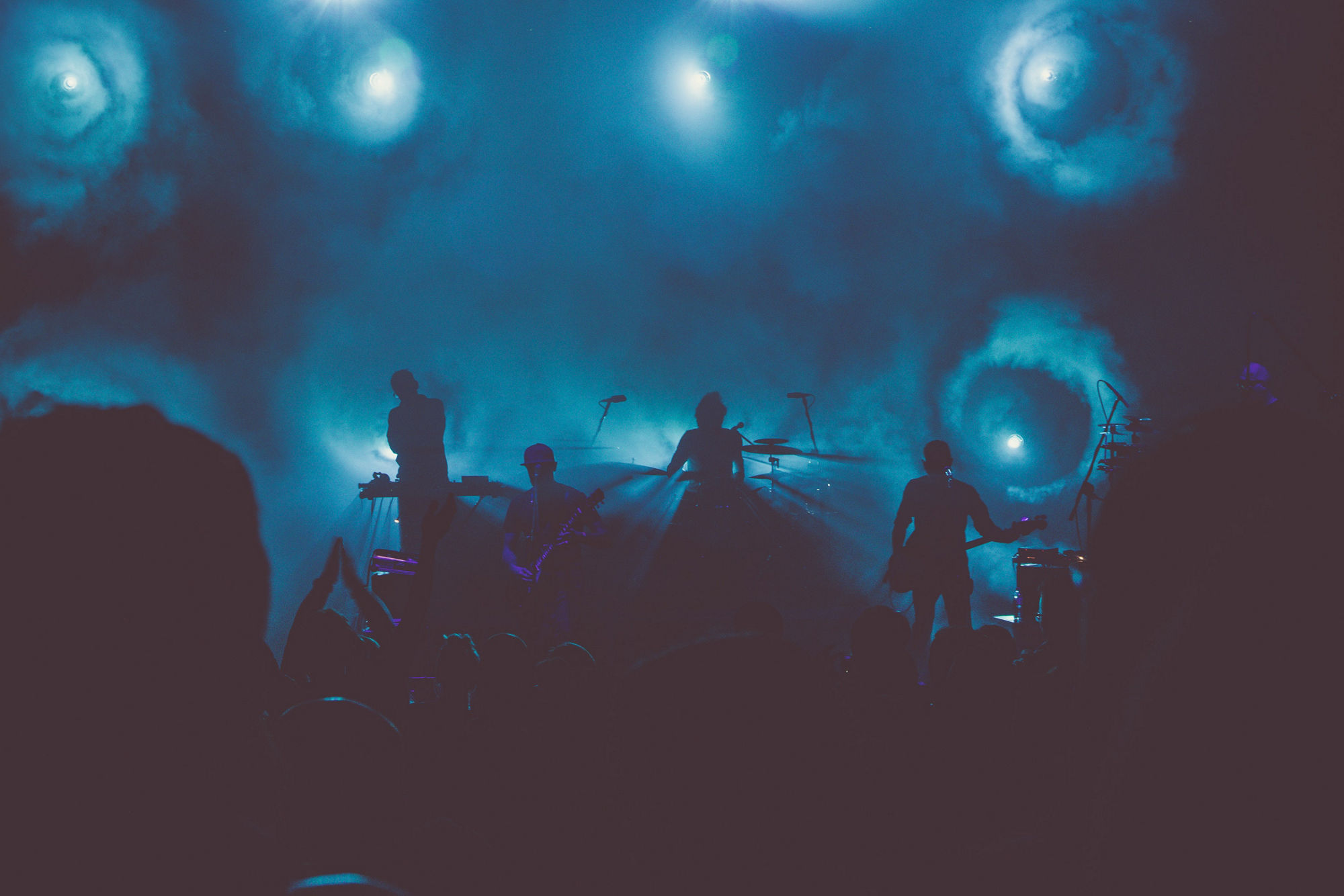 In music, atmosphere can mean many things. Maybe you’re sitting at your laptop and thinking, “I want an atmospheric sound.” Well, that could mean something ambient like Brian Eno to one person, or a type of stratospheric post-rock like Mogwai or Godspeed You! Black Emperor to another. Or perhaps you want your music to transport listeners into another place, whether that place be real or imagined.

Creating an atmosphere can also be about dealing with positive and negative spaces. That is, how you fill out the sound, or leave open spaces within it. Radiohead is particularly good at this. They know when to pack a song segment with melody and noise, and when to let it breathe. Much of it has to do with the instruments used, the melodies, beats, and other sonic and songwriting elements.

As you can see, there are any number of approaches for creating or even just thinking about atmosphere in music. Below are a few approaches to doing it, whether it’s layering sounds, creating alien soundscapes, collaging and sequencing different elements, or just being inspired by something like an abandoned factory building.

With the 2013 album Immunity, UK-based producer and musician Jon Hopkins created an album rich in various atmosphere. Across eight tracks, Hopkins created sounds both rhythmic and tonal. A great album from start to finish, the song “Abandon Window” is one of the record’s most moving tracks, transporting the listeners to vistas that are both melancholic and hopeful.

Hopkins’ genius on this track, much like ambient forefather Brian Eno—with whom he has worked—is the blending of piano and synthesized textures. The piano’s notes, spare though they are, create a sort of rhythm, drenched in reverb. Around this framework Hopkins weaves gorgeous electronic sounds that sound at times like a jet airplane, weather systems, low-level static, and even waves and underwater sounds. Hopkins has said that the song was written in response to the 2011 earthquake and tsunami in Japan.

If you want to do something with these washes of sounds, that are both distinctive but build toward a monumental whole, you’ll need a few different types of instruments, whether that’s hardware, software, analogue and digital, or some combination. And you’ll probably need to do some sampling of, say, underwater environments, and then heavily affect all of these sounds.

For this clip, we used DDLY to add some more atmosphere to the track. The dry version already features some reverb and a little delay on one of the tracks. But we used DDLY’s two delays to add even more space and tonalities to the sound. The analogue delay—80% wet, 41% trash, and set to 1/2 delay time—adds some more delay flourishes to the breathy hi hats, while the Grain Delay pitches some of the synth notes down to -10.3 st., giving the ambient pad a darker hue.

As part of Micachu and the Shapes, Mica Levi records and performs experimental pop with a post-punk edge. But while her pop sensibilities are strong, Levi also studied composition at Guildhall School of Music & Drama in London, and wrote the score for Jonathan Glazer’s dark, psychedelic science fiction film Under the Skin. The movie follows an extraterrestrial being who lures men to their deaths in a black liquid substance, before the being adopts human emotions herself.

Levi’s score, with its collection of atonal drones and ambient synthesizers, has an alien quality that matches the film. The music, especially the song titled “Lipstick to Void,” is a great way to think about atmosphere. There is nothing particularly alluring about the song—it abrasive, unsettling, and relentless. But Levi’s atmospherics are also hypnotizing.

Now, with a white noise layer.

To create this sort of sound, it’s perhaps helpful to throw percussion right out the window. What rhythm remains is sparse and minimal, and set to an incredibly low tempo. This can free you up to work with guitars, other stringed instruments like violins, synthesizers, samples, and even found audio as sound generators. From there, work with different tunings and play with different combinations of notes, and then run it all through Trash 2’s distortions and filters, and even DDLY, to give the sounds and drones abrasive, yet hypnotic qualities.

In the clip below, we used four-note sequence (a different note on each first note of the measure or 16-step sequence) on an Elektron Digitakt. Onboard it’s got a big dose of bit reduction, as well as an LFO modulating the filter resonance at 512 bpm. While already dissonant, it needed some more atmosphere, so we used Trash 2 and Vinyl to add some more depth to the drone.

On Trash 2, we engaged Convolve, which is set to Devices - Snare.

And on Vinyl, we set the Warp depth at 85% with the Warp model set to the topmost button.

These two together give it a really dark, warped and alien quality.

As a member of pioneering Krautrock and electronic group Tangerine Dream, Edgar Froese created some of the most groundbreaking music to appear on records and in movies (Thief, Near Dark). Tangerine Dream’s music was always a great blend of ambient soundscapes and looping, arpeggiated or sequenced rhythms, most notably on the highly celebrated 1974 album Phaedra.

With his two-track solo album Epsilon in Malaysian Pale, Froese used the Malaysian jungle and Australia (which he had visited while on tour) as primary sources of inspiration. For instruments, Froese used the Mellotron (particularly the flute samples), a modular rig, the EMS VSC3 synthesizer, and modified organs. The first track, inspired by the Malaysian jungle, features Mellotron flute samples and synthesized ambient soundscapes; it seems both primitive and advanced at the same time.

An artist like Burial does something similar with sounds inspired by places or spaces, most notably when he imagines walking rainy UK streets in a post-rave contemplative reverie.

To partially recreate a space with music, or simply create tunes inspired by places, there are several strategies. Think about recording found sounds from these places, or locating some online. Maybe you’re from Detroit, and you want to capture the post-industrial sounds of abandoned factories and buildings with your music. Well, you could record those sounds on sight, or you could produce music that makes ample use of negative space. And what sounds there are might well be coated in echoes and reverb.

In the clip below, we work with negative space in a tune that features percussion and synthesizer pads. It sounds cool on its own, but what we did with DDLY is use the Grain Delay and pitch it up to +11.0 st., while turning up the mix to 80% and setting the delay time to 1/64T. This works to give the overall mix some interesting, grainy driven delay artifacts—the kind of sounds you might hear as you drift through abandoned places.

A modern electronic producer who makes really dynamic sound collages, both chaotic and beautiful, is Oneohtrix Point Never (aka, Daniel Lopatin). On his 2013 album Replica, as well as on on other releases, Lopatin samples voices and sounds from YouTube and other sources, then cuts, pastes, and otherwise warps them into distorted sonic kaleidoscopes.

Like Schaeffer and Stockhausen before him, Lopatin creates dense atmospheres of collaged sound, turbocharged with the manic energy made possible by digital music software.

To approach atmosphere in this way, consider various sound sources: your own tunes, found sound, samples, anything really. Get them sampled into software like Ableton Live or another DAW, or into a piece of kit like an Elektron Octatrack or Akai MPC sampler and sequencer, and begin arranging them in chromatic mode or as one-shot samples. For something like Oneohtrix Point Never’s tonalities, Trash 2 would be incredibly useful. The various elements of the track could be run through Trash 2 either before or after sampling, or during both processes.

In the clip below, created using synth and beat samples on an Elektron Octatrack, we kept things simple. Several of the Octatrack’s onboard LFOs are modulating the sequenced samples, but the overall sound is pretty abrasive, not unlike Oneohtrix Point Never’s work on Garden of Delete. To dampen that abrasion, we used Trash 2’s Convolve function, set to Body - Old School. This works as a sort of EQ, bringing out some of the negative space between beats and notes, while making the overall sound seem more full.

Fantasia on a Theme

Fantasia on a Theme with Trash 2