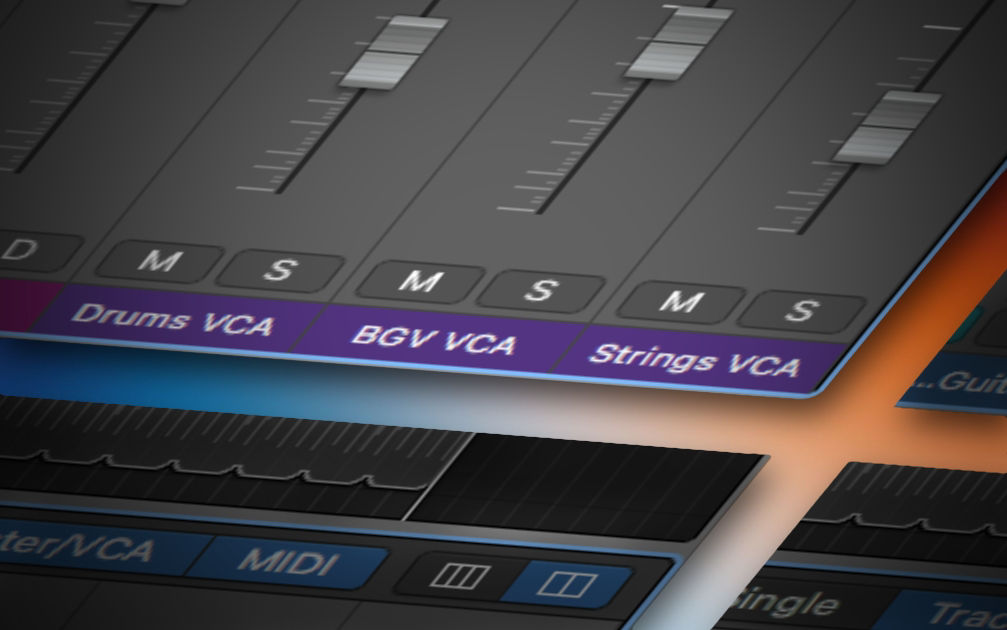 VCAs and sub-group busses can be easily confused. Here’s your primer on the difference and

when it makes sense to use one vs. the other.

As you probably know from the way audio signal flows through a sound console (analog or digital), every single channel strip on a mixing board has an output that can be assigned somewhere. By default, all channels output to the stereo output—meaning all the individual channels are mixed down to a single stereo channel pair, which sends the music to your left and right speakers or headphones. Let's take a look at how sub-groups and VCAs alter the audio flow and how you can use that to your advantage.

What is a VCA in audio mixing?

In technical terms, a VCA, or Voltage Controlled Amplifier, is an amplifier that modifies its gain depending on a control voltage. If your eyes widened and none of that made sense, don't worry. It's a bit confusing, so let me try to explain that in a more human format.

A VCA group allows you to control the volume of multiple channels using one fader, without changing their routing. Imagine this scenario⁠—you have a great mix for a song, but you realize that as much as all your drum tracks sound perfect together when you solo them, collectively the drums in context are too loud. You could manually drag down all the faders for each drum channel by the same amount, but that's a lot of work. What's worse, you risk accidentally slightly altering the balance ratio between the different drum elements. This is where a VCA can come in to help.

Creating a “Drums” VCA in Logic

The way a VCA achieves this is by varying the amount of power that is given to a particular channel. More power = more sound. Less power = less sound. It effectively means it behaves like a master controller altering how much amplitude is being sent out of the individual channel strips. The VCA group channel's level affects not only the output level of the individual channels but also all the levels of any post-fader sends on those channels.

The easiest and most logical explanation of VCAs that I ever heard was this:

What is a VCA?

This gives you easy control over multiple channels at once. You could create separate VCAs for your drums, your background vocals, all your guitars, all the strings, etc. Physical consoles will probably have limits on the amount of VCAs you can create. DAWs are much more limitless and allow you to create just the amount of VCAs you need.

What is a sub-group in audio mixing?

Like VCAs, sub-groups allow you to control multiple channels at once. Where they differ is in their routing. To create a sub-group, you would route the output of various channels to a new auxiliary bus (aux), let's say "Bus One". Then on a new aux channel strip, you'd set Bus One as your input. All those individual channels would be summed—mixed down—to a stereo signal, which would end up on this new channel strip.

Aside from controlling the volume, a sub-group bus has three giant benefits: inserts, sends, and panning. Yep. Unlike a VCA ,which can only affect volume, a sub-group acts like a regular audio channel. Meaning you can add any insert effects of your choosing (iZotope has plenty of brilliant ones like Neutron to help unmuddy your mix), send copies of the signal to effect busses using sends, and control the overall panning for the group as a whole.

Going back to our drum tracks, how would things work if we were to create a drums sub-group rather than a VCA? Well, we'd route all the drum channels to the same aux bus which we'd call "Drums". This aux bus would feature all the signals from the individual drum channels mixed down and combined. What's great about this is that at this point we could apply EQ and compression to the whole group's summed signal—and so much more if we wanted to.

Creating a sub-group bus in Logic

When do you use sub-groups vs. VCAs?

This will really depend on the circumstances and the type of control you need. If all you need to do is control the volume, then a VCA will be the perfect fit. On the other hand, if you need to do further signal processing on the summed signal, then use a sub-group bus.

You can also use both at the same time! Let's say you recorded four individually mic'd background vocalists on your song (two male, two female). You had all four sing the first vocal part, then all four record the second part and so on. To keep things organized, you would route all the background vocal tracks into four sub-groups based on the part (part one, part two, part three...). Now, what if you needed to easily adjust the volume on all the female tracks at once? By assigning a VCA to the appropriate channels, you could control all the female channels without messing up your routing.

Sub-groups and VCAs can be super helpful in organizing your audio flow. They're a great way to untangle and simplify complex routing situations. I use them extensively in the work that I do. Whether you're a novice just starting out on your audio journey or a seasoned audio pro who is looking to simplify how they work, I hope you start experimenting with sub-groups and VCAs. Each has many applications and can be used in various scenarios. And the best part, you can use them hand in hand to achieve different things. Give them a try and let me know how they help you in your work!