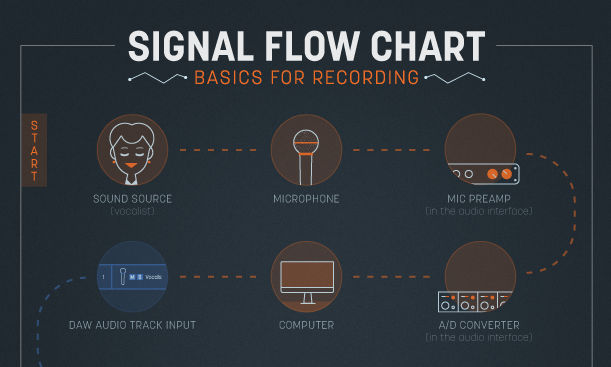 Understanding signal flow in DAW-based recording and mixing is vital for efficient music production. Unfortunately, it's not hard to get lost or misinterpret where your signals are going and when they hit different software and hardware elements of your setup. Confusion about these things can quickly lead to counterproductive actions, incomplete routing configurations, or even dangerous feedback loops.

Signal flow between components tends to be easier to comprehend when you can see cables connecting them. However, in a DAW, you are typically not provided that luxury as you're usually dealing with virtual connections that cannot be seen. So, it's not as easy as following a cable trail from device to device.

Although there are oodles of signal flow variations, none of them will make sense if you don't grasp the basics.

I've seen a lot of slip-ups in recording sessions where people think a certain process or piece of gear is being recorded when it is really only being heard. Such mistakes can be avoided with a few facts planted firmly in your memory. Let's analyze a straightforward vocal recording setup with just the basics—a mic, audio interface, computer, and headphones. 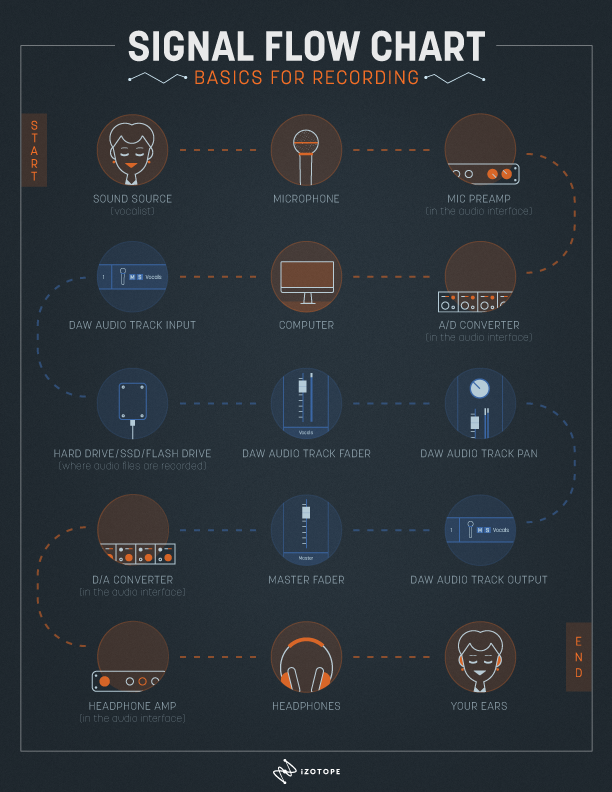 Two facts of supreme importance to keep in mind:

2. The fader is after the hard drive (where the audio file is recorded). As a result, the track fader does not affect your recording level.

People use plug-ins in recording sessions. So, let's add two plug-ins—a compressor and an EQ—to the vocal track in the previously outlined signal flow.

Everything else about the basic signal flow remains the same.

Two crucially important facts to note about this order:

1. The plug-in processing on the vocal track is not recorded to the vocal audio file, it is only being monitored.

Some plug-ins, such as Ozone 9, have multiple modules, which can be rearranged. In the before and after images below, notice that the order and number of modules can be changed. There isn't a universally right or wrong order when it comes to plug-ins and processors, so experiment!

Auxiliary sends (a.k.a sends) are used during recording sessions for purposes such as headphone mixes and reverb configurations because they can easily route a duplicate signal to a different destination than the track output. Remember that sends are duplicating (splitting) the signal and therefore do not affect the signal that is on the normal signal flow path in the track.

As for sends, in they go to the signal flow!

Sends can generally be set to one of two positions, pre-fader or post-fader.

Pre-Fader: the send will be before the track fader. No matter what you do with the track fader, the send level remains the same. This is normally preferred when routing sends to headphone mixes because the send levels feeding to the artists won't be affected by level changes to the track faders. This allows separate mixes to be made for the engineer and one or more artists.

Post-Fader: the send will be after the track fader. Any level change to the track fader will affect the level of signal to the send. This is normally preferred when routing sends to time-based processors such as reverbs and delays because it allows the ratio of original to affected signal to remain fixed even as the main track fader is adjusted.

With the sends in place, the resulting signal flow order is:

Everything else about the basic signal flow remains the same.

Two important facts about this order:

2. Sends do not affect the recording or the level going through the track fader. This means that you can adjust the send levels without impacting the main signal level in the track. If you take away the first six steps from the recording signal flow (because they don't apply to mixing), it is identical to the mixing signal flow!

A wildly common self-induced mixing problem is clipping. Fortunately, it can usually be avoided through a clear understanding of signal flow. For example, imagine the following scenario: an audio file that was recorded at a peak level of -2 dBFS is played through a compressor plug-in with 2 dB of gain reduction and a 9 dB boost on the output level. That is passed along to a pre-fader send at 0 dB, the track fader at -1 dB, a post-fader send at 0 dB, and eventually the Master fader at 0 dB.

Where would clipping occur? If you thought, "From the plug-in though the Master fader," you're correct! Every stage after the plug-in would be above 0 dBFS (see image below). How would you fix the issue? If you thought, "Turn the faders down," you're wrong! Since the clipping was caused by the gain boost in the compressor plug-in, the signal needs to be attenuated either in the plug-in or before it, which would require a region-based level adjustment.

If your DAW offers both methods, choose carefully. Lowering the signal level before the compressor plug-in would change the amount of compression, whereas lowering the compressor plug-in’s output gain would not. With any threshold-based plug-in such as a compressor, gate, or dynamic EQ, changing the level before the plug-in will definitely affect the functionality of its processing. You can use that to your advantage, but it can become a problem if you forget about it.

Lastly, it should be noted that in the floating-point processing universe we have the ability to increase levels above 0 dBFS without clipping, but the signal must be reduced before being rendered to a fixed point (24 bit) data chunk or before playback through a convertor to avoid clipping.

Of course, there are a myriad of signal flow variations, especially if you start using analog outboard gear or plug-ins in DSP-powered mixers. The good news is that if you feel solid and confident about signal flow in the preceding scenarios, you can run sessions more effectively and successfully create more complex configurations to suit the creative needs of you and your clients. Be comfortable with the basics first, then get fancy later on!

Learn more about working in the world of digital audio