In July of 2019, game composer and sound designer Antonio Teoli and a few assistants headed deep into the Amazon to record the instruments and music of tribes native to the region. The result was a beautiful collection of sounds—never before heard by much of the world—all compiled into a one-of-a-kind playable sample instrument. This is the story of that journey.

Born and raised in São Paulo, Brazil, Antonio grew up studying classical music from a young age, and by his early teens, he had become hooked on video game music. He knew that creating an interactive soundtrack and conveying a director’s vision to gamers through sound and emotion was for him. In Brazil though, making this a career felt like an unattainable dream.

In 2003, at the age of 17, he began looking into universities to attend. In what could easily be seen as a portent of things to come, he found that one of the universities—which he had initially considered for their music program—was launching a video game design major. Taking this as an indication that there must be some level of video game industry in Brazil, he enrolled with the thought that if he could learn about video game design, he could use his existing knowledge of music to merge the two.

After only a few months in school, he became the first student from the program to be hired by an outside company and began working as a trainee with the largest game developer in Brazil at the time. Before long he was working on games like “Second Life” and with major brands such as Barbie and Disney. For the next 15 years he would continue this work in Brazil, before eventually moving to L.A. in 2018. Antonio Teoli and his team en route to the Amazon

The path to “The Amazonic”

In January 2014, Antonio received a call from Samsung, asking if he’s interested in the role of Audio Director and Lead composer for their virtual reality and mobile platform games.

Having grown up in São Paulo—a city larger than New York—Antonio was understandably hesitant to move to the rainforest. After some negotiation though, Samsung convinced him to fly out and at least have a look at the location and the studio. With the worst-case scenario being a free trip, he eventually agreed.

Upon arrival, his contact from Samsung showed him around, leading him to a huge, empty room. As Antonio recalls, his host said, “Do you like this room?” Antonio answered, “Oh yeah, it’s a big room.” His host replied, “OK, this is where your studio is going to be, so you can ask for whatever you want.” At that moment, Antonio knew he was sold on the idea.

During the nearly four-and-a-half years he lived there, and despite his passion for Brazilian culture and music, Antonio realized the Amazon was host to a myriad of sounds, cultures, and music he had no experience with. Immersed in this diverse sonic landscape, he was inspired to approach Samsung about doing projects with the natives and their music. Samsung didn’t take the bait.

It wasn’t until a few months after moving to the U.S that the thought reared its head in Antonio’s mind: “Damn, I should have created a virtual instrument with those [indigenous tribes]!”

With the help of two friends from the Amazon, a six-month research period followed and culminated in a trip back to the Amazon for what would be a grueling recording session.

The recording session in the Amazon

Over the next two weeks, Antonio and his team consistently worked 18-hour days, rising with the sun and often working until midnight. They recorded an astounding 109 instruments, with even more catalogued via photo and video. Most instruments were recorded with four to six mics, and some sessions utilized many more to capture the performances of up to 25 musicians—many of whom had never seen a microphone in their life.

This cultural juxtaposition played an interesting role in the recording sessions. Many of the recorded musicians were indigenous people born in the local tribes. Some cultural adjustment was required for them to be comfortable around the microphones and understand their role.

On top of that, many of the instruments were difficult to mic, without strong precedents from the recording of traditional western instruments. One of Antonio’s favorites was a larger water drum, made of a seed pod the size of a human torso—like something out of Jurassic Park. The seed pod was split in half, filled with water, and then used two smaller seed pods the size of coconuts floating on top. These were played with brushes as tonal percussion, while water splashes were used as accents. Figuring out how to mic this and capture the full range of the instrument, while also keeping everything dry, was one of the most difficult challenges of the project.

In the end, they got what they were after with this and 108 other instruments, and boy was it worth it. In addition to the multi-sampled instrument they produced, the ethnomusicological and archival significance of this project cannot be understated. Given that many indigenous peoples around the world are losing their homelands to deforestation and industrialized agriculture, and that with those losses go their musical culture and heritage, projects like Antonio’s provide an invaluable historical record.

Preservation was at the forefront of Antonio’s mind from the outset and was a motivating factor in all the video footage he and his team captured. Recently, they’ve been sharing short videos of the tribal musicians talking about the instruments and their context on social media every couple of days, as a way to spread awareness of what’s at stake in regions like the Amazon.

Explaining the fundamental concept behind his project, Antonio says, “The idea of ‘The Amazonic’ is to record tribes, starting in Brazil, and eventually all over the world, and really go deep on the historical and cultural context while providing people with these sounds—all while spreading awareness that there is way more than we’re used to hearing in music on a daily basis.”

In keeping with Antonio’s mission of bringing visibility to at-risk populations, 30% of all purchases of “The Amazonic” go directly back to the Amazon community. Not only that, but one of Antonio's contacts in Brazil will work with the locals to determine and deliver resources they need most. They’ll even go out of their way to send you a personalized thank you video. 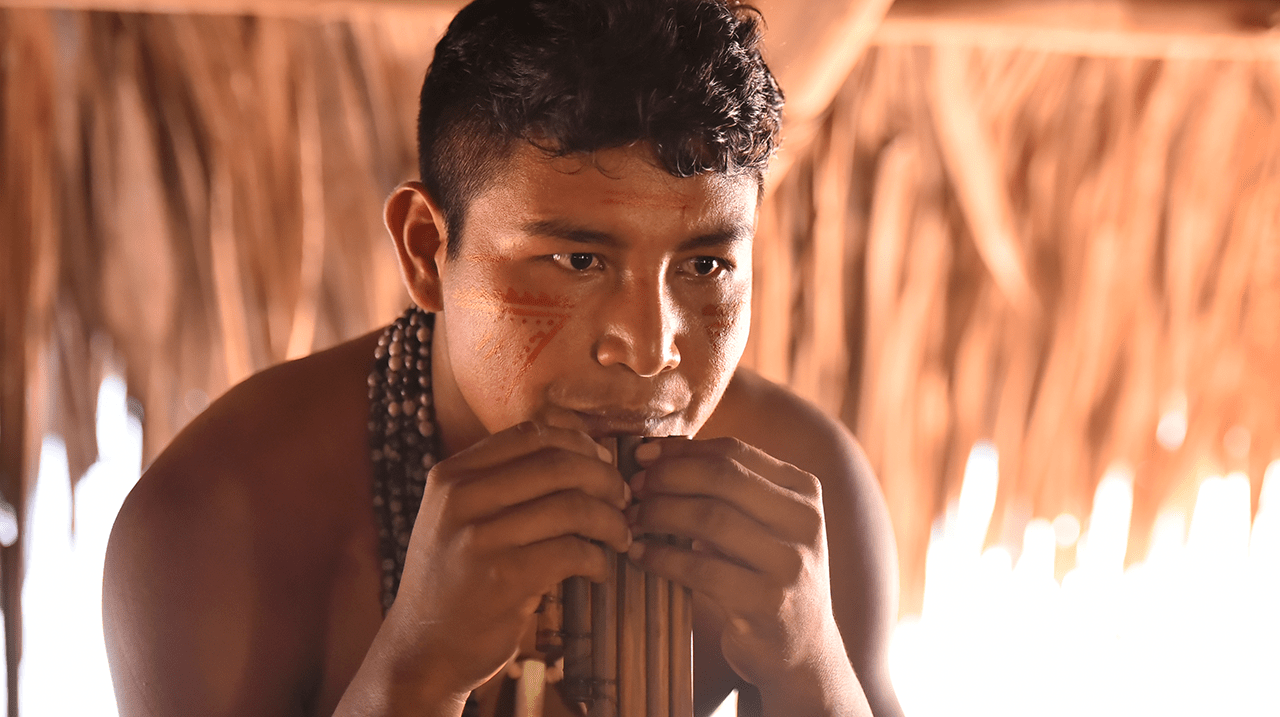 One of the native musicians performing

Upon his return to L.A., Antonio found himself with a staggering number of files to work on, and RX, Neutron, and Ozone played key roles in preparing the raw field recordings for use in the sample library.

Due to the imperfect recording environments, RX was crucial to remove extraneous noises from the tribal group recordings created outside of a studio. Once everything was cleaned up, Antonio decided it was important to find a balance between offering a very organic sound and one that could still be surgically production-ready, easily slotting into a modern composition and arrangement.

This was where Neutron became Antonio’s best friend, particularly Mix Assistant and the Sculptor module. In particular, he found that Sculptor changed the sound in a way he loved and made it easy to impart a modern quality to the recordings very quickly. As the instruments were all non-traditional, Antonio tried different instrument profiles in Sculptor. Other times he would try Mix Assistant to see what suggestion it would come up with. One of these two methods would often push him to experiment in directions he otherwise might not have thought to try.

Explaining his typical Neutron signal flow, Antonio reflected that he usually loaded modules in the following order: Sculptor, EQ, Transient Shaper (typically single-band), Compressor 1, Compressor 2, and finally Exciter (most often in Tape mode, although Retro and Tube made appearances too). The all-in-one nature of Neutron, coupled with its incredibly flexible signal flow, made it easy for him to experiment with the module chain and find what was best for each sound.

Once he balanced and processed all the individual mics, Ozone provided the final bit of extra glue needed to get everything production-ready. Here are a few examples of sounds before and after processing.

Reflecting on the primary challenges RX, Neutron, and Ozone helped him overcome, Antonio recalled that many instruments had a very “boxy” characteristic. While he wanted to keep some degree of this for authenticity, it was also important to prevent it from being problematic or annoying. This required a degree of balance between his memory of what the instruments sounded like when he recorded them in the field and his desire to achieve a modern, production-ready sound.

Explaining how he accomplished this he says, ”When I start mixing an instrument I’ll re-watch some of the video recordings that we have so that I can visually remember what the instrument is. All of the instruments are also cataloged with pictures in a huge Trello [board], but these recordings were made almost a year ago, so it’s been a while. Then I’ll listen to a modern production, like something from Hans Zimmer, and try to find a balance between those two worlds.”

Antonio has managed to create something truly beneficial to everyone it touches. Producers and composers get great new content to work with, the world gets a precious ethnomusicological record of these unique musical traditions, and perhaps most importantly, the communities of the musicians who helped create this get some much-needed relief with each sale.

Of course, Antonio doesn’t plan to stop there. When asked if there were other places he’d like to travel to record similar projects, he had this to say:

“Right now I’m researching some places in South America. Peru has a lot of interesting areas and remote tribes, and even in Brazil, there are a lot of things we still don’t know about. But my dream would be to go to even more remote places, like Tibet, where you could really explore and get deep, and record not just the instruments that are known in Western culture, but some of the really weird ones!”

You can find more information about The Amazonic at www.theamazonic.com and on Instagram as @theamazonicaudio, and for more on Antonio, you can visit www.antonioteoli.com.