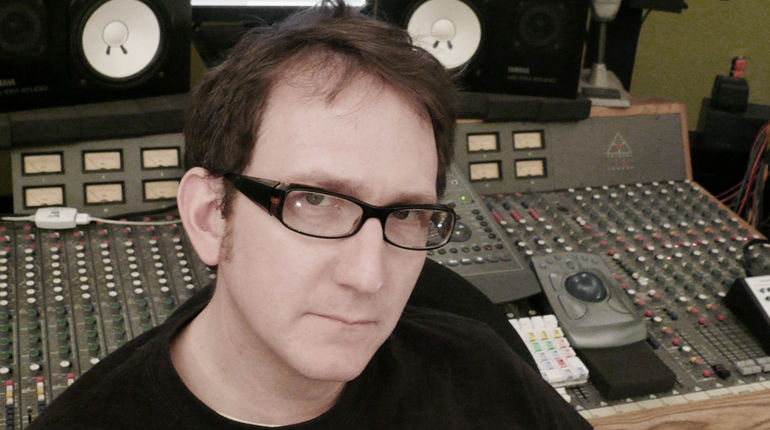 Many fields of real-world audio work require specialized tools to professionally approach the tasks at hand. Case in point: forensics.

"Unlike music, where you are trying to bring out the beautiful, here you have a very specific job and that job is to make the target audio heard clearly in a courtroom and provide documentation of your methods." Boudreau explains, "I’m taking raw undercover audio recordings and using RX to uncover and identify the voices layer by layer, working solely to increase intelligibility. When there’s a recording made outside during a conversation, there is an amazing amount of ambient noise coming from everywhere: traffic, wind, coughing, sneezing."

"The complications don’t stop there, either, Boudreau adds, "You put a concealed microphone in a hostile environment and it’s going to be very hard to capture the voice clearly."

RX has become Boudreau’s tool of choice, in part because of the simplicity of the user interface. 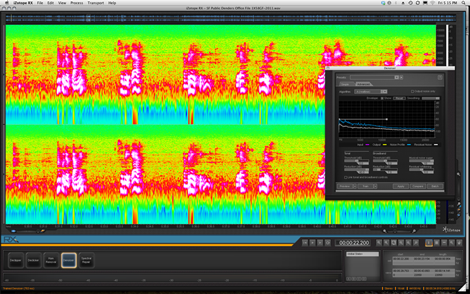 "It’s very intuitive as to how you use it and how to quickly get the results you need. Of course it takes some work to really hone in, which comes with experience, but the RX package quickly gets you through a lot of the painstaking work, allowing more time to get to the nitty-gritty."

Boudreau starts with a quick clean up using Hum Removal, and then moves on to RX’s Denoiser. "The training feature in the Denoiser is amazing. You feed it a file. It analyzes the audio and then allows you to selectively remove just the noise, leaving everything else amazingly intact."

"The hardest part of these particular recordings was a car radio, parked near the conversation. Booming Hip Hop, blasting from a nearby car, was really obscuring everything. Rolling off the low end helped of course, but it also revealed how distorted the voices of the conversation had become with the overload. Adding to that, the conversation was competing in the same frequency range as the spoken vocals from the music." 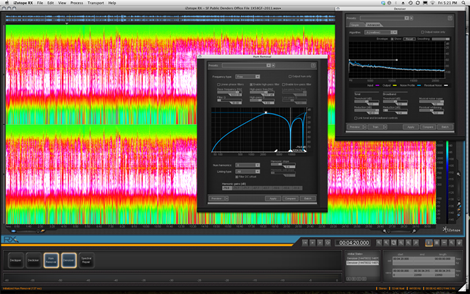 RX’s De-noise module, shown above, is used by Boudreau at the beginning of his process to remove noise in small batches.

Boudreau continues, "I had to go in with Spectral Repair to do the meticulous micro work. First up was identifying the individual target sources and developing their unique spectral profiles. This was where multi-resolution mode really helped in the separation, as there was a lot of obscuring low end. I then used these profiles to isolate the vital source." 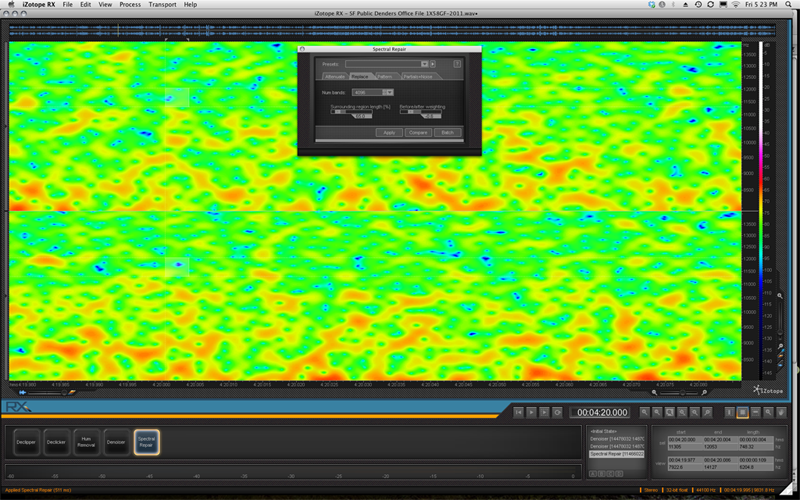 RX’s Spectral Repair Module, shown above, allows Boudreau to go in on a microscopic level and remove small sonic events that are getting in the way of conversation intelligibility.

"Luckily, the music content had solid enough signal to use the new magic wand tool on most of the elements. It not only selected the sound, but captured its harmonics as well. It did a great job removing almost all evidence of the unwanted sound."

Once the exposed conversation was nearly isolated, distortion from the clipped audio required cleanup for unmistakable intelligibility—a distinction that is key in court. "I found the Declip module worked amazingly well, but these heavily distorted tracks needed some Decrackle to really finish them off. Then it just needed a bit of leveling and EQ to massage and polish it up."

"I could literally do the entire project within RX Advanced—including saving off my time-stamped task histories as XML files with screenshots, which are important when doing legal work" he grins.

The modern courtroom requires this type of audit trail to confirm the validity of the evidence in question. As audio technology advances, the same tools that improve the clarity of audio evidence can also be used to obscure the truth, either through counterfeiting or concealing source file manipulation. The documentation provided by RX proves that no audio files have been wrongfully tampered with once the recordings have been released for cleanup.

"Sometimes I’m asked to authenticate files, which require hard proof of discontinuity, location analysis, voice and equipment identification..." adds Boudreau "RX can handle all these tasks, allowing me to save off spectral profiles for future comparison."

Boudreau enjoys the contrast of his forensic audio work when compared to making records. "It’s very different work, requiring total focus, and lets you really utilize your knowledge and experience to solve puzzles. Painstaking work for sure, but RX takes a lot of the monotony out of it and provides the surgical precision that allows me to follow my intuition."