Are you looking for tips on how to mix a song? In this video, GRAMMY-winning and multi-platinum mix engineer David Yungin Kim shares how he uses iZotope plug-ins to take a mix to the next level using the song “Gon’ Shine” by STL GLD.

Watch as David shares how he organizes his tracks, submixes, and routing in his DAW. Continue with the mixing process starting with the bass, then moving to drums, musical elements, effects, and vocals. Lastly, learn about the mastering chain David uses to get the final levels and polish in his mix.

Who are you and what do you do? Can you flex for a minute and say who you've worked with?

“My name is David Kim, I’m a mix engineer from Los Angeles, California. We are at Chalice right now, this is where I came up from intern to engineer. I’ve worked on the past two Nas albums, King’s Disease and Kings Disease II, which just got nominated for a GRAMMY. I’ve worked with the late, great Nipsey Hussle, Kendrick Lamar, DJ Khaled, Hit-Boy, just to name a few.”

You grew up listening to Nas, what was it like to meet your hero and work with him?

“If I had to put it in one sentence: If there was no Nas, there would be no David.

The first time I worked with him was at Chalice recording studio in LA and it was one of my first engineering gigs. This was the first time I was actually nervous to record somebody. Until then, I understood that everybody is a person when they come into the studio, right? Your favorite artist, no matter how big they are, when they step into the studio, they are just people. But for some reason that day my hands were shaking a little bit, my voice was shaking a little bit. I told him though, ‘Hey you’re the reason I started listening to music, working on music.’ and he said, ‘Man, that’s crazy, full circle. We are where we’re supposed to be.’ And that really resonated with me, and that made me feel like I was supposed to be here.

Working in music is really fickle because it plays with your emotions. You know, one month you have all of these projects lined up and then the next month you’re dry. We’re human beings so we go through that whole process of, ‘Is it me? Is it something I did wrong?’ You start listening to your mixes and picking out things that you could’ve done better, and that’s what would’ve called them back. This was the first time I felt that I was supposed to be here, and I worked my ass off to get to this point, and it’s led me to meeting my heroes and working with the person that started it all.”

Could you talk a bit about working with Nipsey Hussle?

“I had the pleasure of mixing ‘Racks in the Middle,’ which Hit-Boy produced. It was incredible because I recorded the last end of that song and while I was in the studio, I did something that I’ve never done before, which was reach out to him and ask if I could personally mix the song. I felt like I had to mix it because I felt some kind of energy, you know?

Nip had this energy that consumed the room. Every time he walked in, every word that he spoke, people listened. There’s something about his demeanor and his respectfulness for everybody in the room that caught your attention.

That recording session, I was like, ‘Man, if I don’t reach out to him, and if I don’t ask him if I can get the first pass at this mix, then I’m going to regret it for the rest of my life.’ We mixed it in Studio B of Chalice. The first pass he came in and he was like, ‘Oh this is perfect.’ He had one note which was turning a dB up on his vocals. He requested to lay it on the board so we had a hybrid mix, and the rest is history.

This interaction started a positive habit for me: not being scared to reach out to A&Rs, to producers, to artists, and see if they're willing to take a chance with me. Because more times than not, they are, and they’re waiting for someone to reach out for them. Over the years I used to spend a lot of time in the corner of this room while I was an assistant. I’ve seen some dope engineers in here, Josh Goodwin, Fabian, Lesley, and any chance I get I’ll reach out and ask, ‘Hey, how did you do that?’ or ‘What hotkey did you use?’

Even if I’m having a discussion with an artist that’s brand new, or a producer, I’m taking down mix notes. I’m seeing what they’re doing, and even if it’s technically wrong by the book, if I have an opportunity to use that, I’m going to try it.” 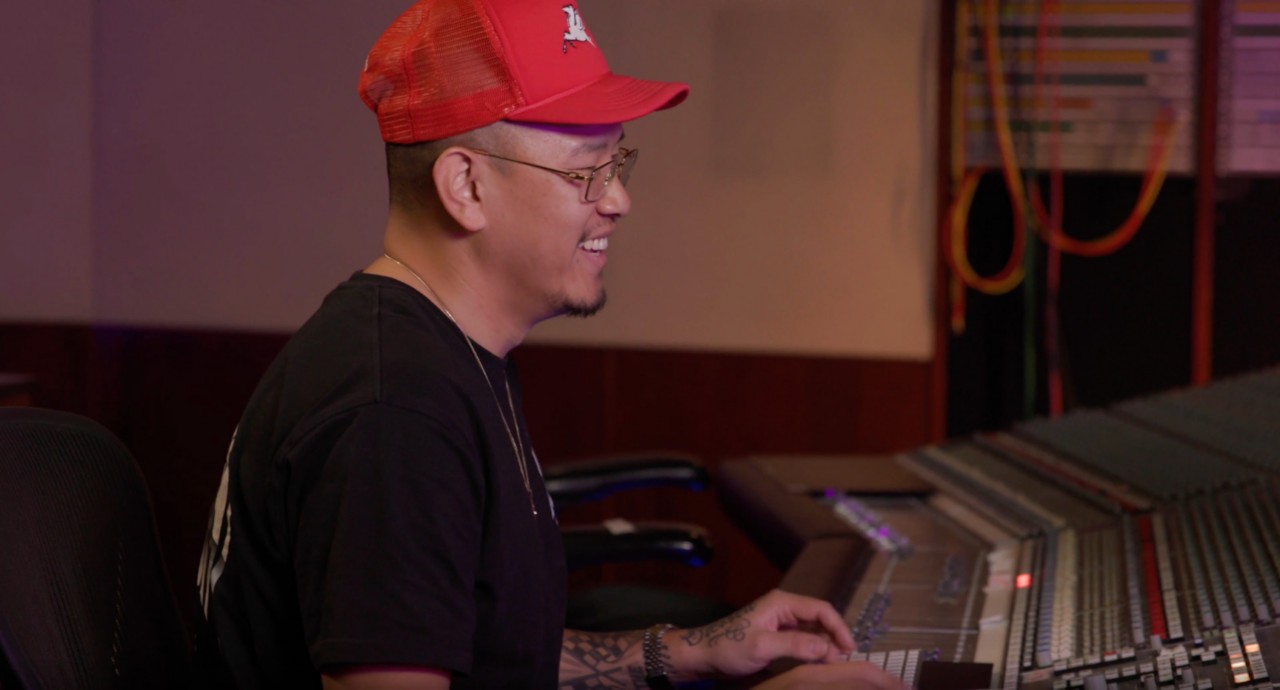 “I think it really helps to have peers in the industry. If you have this huge problem that you think you’re going through by yourself, and somebody can relate to you, there’s a crazy way in which that calms you down, and brings everything down to earth so you can problem solve and get past it.

The most important thing for me [in mixing] is organization, because once something is organized to my eyes, it gives me ample room to be creative. Once I know my hotkeys and once I don’t have to think about how to route this or what plug-in I should use on this, it makes your workflow just ‘flow’ easier.

My advice would be learning hotkeys, learning routing, learning signal flow, and once all of that foundation is there, then that will give you room to experiment and more time to try things and fail and learn. There’s nothing specific that I learned from these guys other than that they're not scared to try things and they are extremely organized. It’s always a battle between balance. Life is like mixing, man. You’re never done, and it’s never going to be perfect. But you get it to where you get it, and move on.”

“Life is like mixing, man. You’re never done, and it’s never going to be perfect. But you get it to where you get it, and move on.”

How do iZotope plug-ins help you in your mixing process?

“I love how easy Nectar is to use. It has a pitch corrector built in if you choose to use it. EQ sounds great. The De-esser I love—especially because it has a mix knob. A lot of times, with de-essers, it’s either not working enough, or working too much and there’s no medium, happy ground. When there’s a mix knob on there, you can blend how much dry signal you want with the processed signal.

For those without a super treated room, Tonal Balance Control is a lifesaver. If I ever need to go to a different studio that I’m not familiar with, I’ll throw this guy on. Even if I’m in my room, sometimes you get ear fatigue and you’re not hearing certain frequencies like you should. On fresh ears, this will give you a good indication of where you’re at.