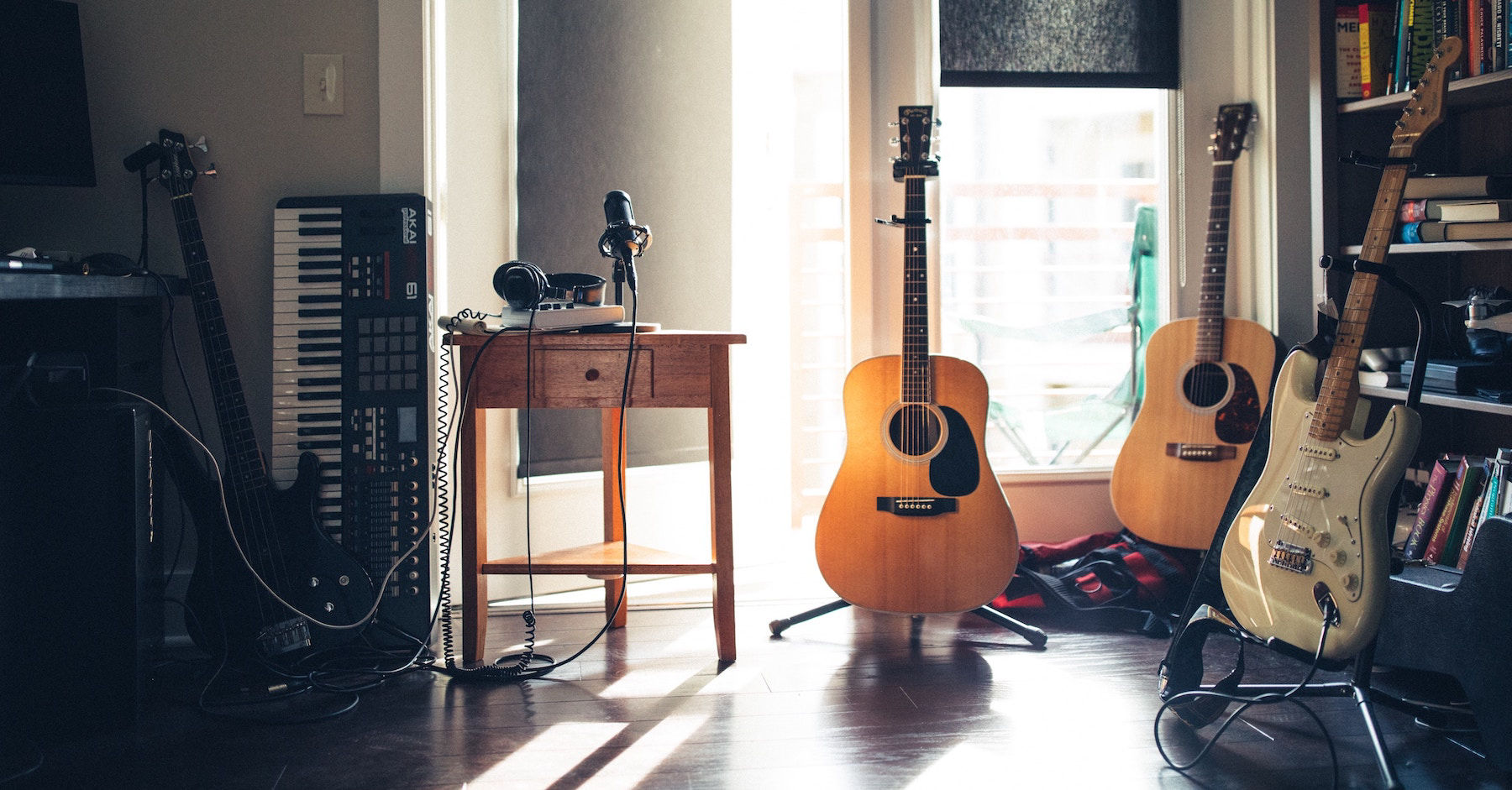 Creating recordings on your own usually means recording in the spaces that you have available—and these spaces were likely designed for living, not recording. Despite this, the space you record in can leave much more than a subtle sonic imprint on your creation. Luckily, with a little bit of thoughtfulness, and by following these home recording tips, it’s not that hard to work with what you have.

First, let’s quickly talk about “room sound” and exactly what it is. When you record something with a microphone, the instrument or voice that you’re capturing isn’t the only thing that’s picked up. In addition to the sound that makes it directly from your source to the mic, it takes a trip around your room, bouncing around your walls and anything else in the vicinity before it’s captured. This is how the “sound” of your room makes it into your recordings—and no two rooms sound the same!

Typically, there are two trains of thought when it comes to room sound: try your best to minimize it, or embrace it and let it make its imprint on your recording. More often than not, we focus on the former. After all, our apartments or houses typically don’t sound excellent, and you can always add a synthetic room sound after the fact, but you cant remove one that’s locked into your recording. The great thing about these two trains of thought is that neither is exactly right; it’s all about what sounds good to you and what compliments your song and recording.

In the spirit of embracing your room sounds, let’s take a look at how a few rooms in your apartment or house may sound different. Remember that no two rooms sound exactly the same; yours could sound quite different!

The bedroom is probably the first and most common place to make recordings in a house. Many bedroom recordists follow home recording tips to make their songs sound as good as possible. In addition to having a space to yourself (no roomates or siblings to ruin a perfect take!), it’s also where many of us spend most of our alone time where we might conjure up new musical ideas.

Bedrooms tend to be smaller rooms, which usually results in a shorter room reverberance, and mattresses and pillows help absorb and dampen some of the sound. Additionally, small rooms tend to enhance the sound of bass (although not always for the better!).

Here’s a recording of an electric guitar amp with Spire Studio’s built-in microphone positioned 20 inches away from the front of the amp. All subsequent examples were recorded exactly the same way, just in different rooms. Note the relatively dry (free of significant room reverb) sound, and robust bass sound.

Guitar Recorded in a Bedroom with Spire Studio

And here’s a tambourine recorded the same way. Similar to the guitar, the sound is relatively dry.

Tambourine Recorded in a Bedroom with Spire Studio

If there’s one room in the house that has a distinct sonic personality, it’s the bathroom. The combination of reflective tile, hard countertops, and mirrors create a distinctly reverberant timbre, and a fun one at that—after all, who doesn't love singing in the shower! And while the bathroom may not be the most comfortable place to record, it can be worth it to bring some of its character to your recording.

Here’s a clip of the same guitar amp in the bathroom. Hear how this time there is a distinct reverberance, but also a robust low end due to the small size of the room.

Guitar Recorded in a Bathroom with Spire Studio

Tambourine Recorded in a Bathroom with Spire Studio

Kitchens, with all their hard surfaces like countertops and tile floors can have a nice and bright sound, while usually less intensely reverberant than a bathroom. This can be great to bring a little bit of liveliness to your sound without overdoing the reverb.

Here’s a clip of the guitar amp placed on the kitchen counter. Note the brightness to the sound, tighter bass, as well as the slight reverberation; more than the bedroom but less than the bathroom.

Guitar Recorded in a Kitchen with Spire Studio

Tambourine Recorded in a Kitchen with Spire Studio

Living rooms may have some sonic similarities to bedrooms, but with a subtly different character. And as a plus, living rooms can be quite comfortable to record in, especially with multiple musicians present.

Here’s a clip of the guitar amp in the living room. This living room has a similar sound to the bedroom, but with a little more reverberance and energy.

Guitar Recorded in a Living Room with Spire Studio

Tambourine Recorded in a Living Room with Spire Studio

While recording at home has many limitations, it can be fun to try to flip some of those around and use them to your benefit. So try experimenting for yourself to see how the different rooms in your home sound—you can even try different places within the same room! Once you get a feel for the different timbres you have available to you, think about how they could compliment your recordings.

Lastly, don’t forget that the sound examples here are just the way the rooms in one house sound; yours could sound completely different, so experimentation is key.

BONUS: Whether you’re recording in your bedroom, bathroom,  or kitchen, recording with the Spire iOS app with a subscription to Spire Pro can help you get pro sound without the expensive recording studio. Sign up for a free three-day trial to get access to automatic noise removal, creative effects, royalty-free beats, and upgraded intelligent audio processing to make your creative ideas come to life.