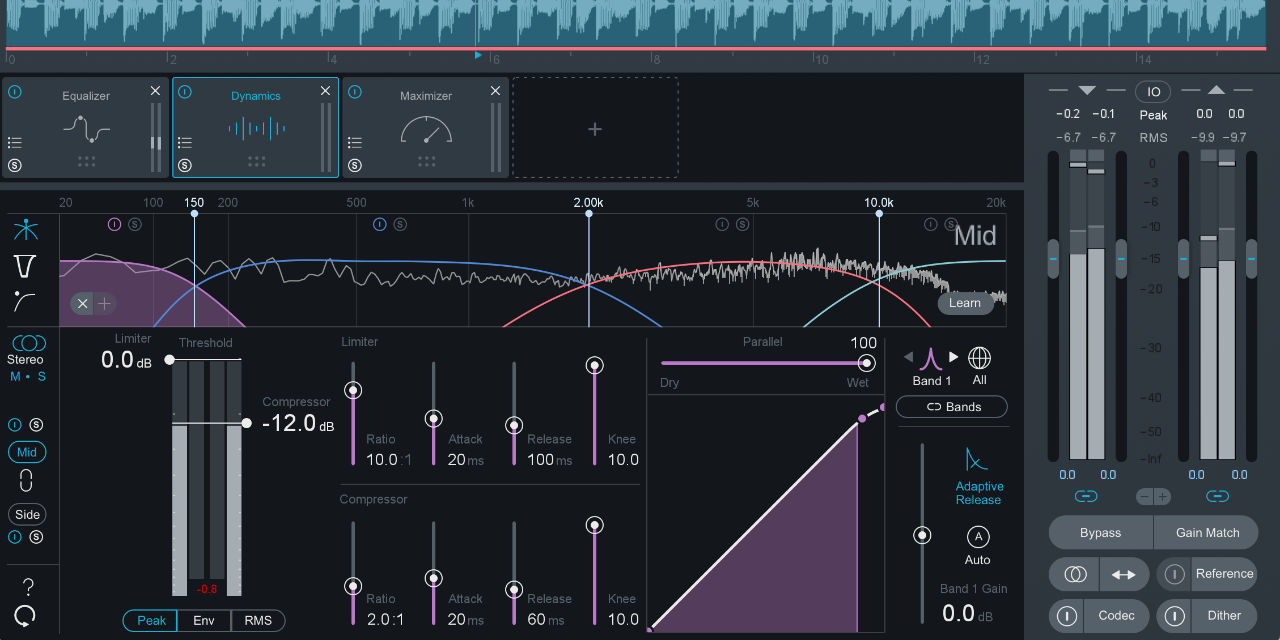 Today, we bring you another “mistakes” article, one centered on mid/side processing. Digital technology has made M/S techniques eminently easier to achieve, so it’s understandably attractive to recordists, producers, mixing engineers, and mastering engineers alike.

But take heed, good reader—M/S techniques can absolutely ruin your mixing if applied indiscriminately. So let’s dive into some common M/S mistakes, and what we can do to avoid them.

1. Not understanding what M/S actually is

We think of M/S meaning “mid/sides”—a way to separate what’s going on in the apparent center of the audio signal from the apparent sides (the extreme stereophonic elements). But this is not exactly correct. The better term for “mid/side” is arguably “sum/difference,” and here’s why:

Of course there’s more to it than that. There’s a whole bunch of routing and science to consider that allows us to create an M/S matrix. But we’re not covering that in this article (you can read more about it here).

So why did we spend time on this just now? To highlight an essential mistake we sometimes make: M/S is not a perfect separation between your stereo elements and your center elements. There will be overlap, and failing to understanding the overlap can have deleterious effects.

For instance, as both parts of an M/S signal begin with the left channel in their maths (left plus right, or left minus right), you’re faced with the following problem: whatever exists in hard left will exist in both the resulting M and S. So, a shaker panned hard left will be affected by a high frequency boost/cut either way.

Say you’re mastering this shaker-to-the-left tune. Let’s go one further and say you’re using a dynamic EQ to tamp down the shrillness of a vocalist. Well, you’re also going to affect that far left shaker, which could be problematic—it could mess with the very reality of that shaker, and cause a weird, spatially-distorted effect.

So, if you’re using M/S techniques on any sort of global scale, take heed to understand exactly what you’re doing.

In these days of easy M/S manipulation, M/S compression is available on many plug-ins. Free M/S matrixes abound to turn any two instance of a compressor into an M/S processor. However, in most situations, I would advise against using M/S compression, unless you’re trying to get a specific effect. For naturalistic widening, the technique should not be your front line, and it relates to the last tip:

So if you have a rock mix, with guitars in the left and right channel, and you want to apply M/S compression to compress the center channel more than the sides, you could very well wind up with a left-panned guitar both raising and lowering in level at odd intervals; this could destroy the balance of the mix as a whole.

A better use of M/S compression, I believe, centers around trying to get desired effects that don’t occur in the natural world. Take an EDM mix with a bunch of stereophonic synths. You could slap a multiband compressor on them, put it in M/S mode, and sidechain the S channel to the kick drum. Then, when you get that pumping which is a hallmark of the genre, the instruments won’t just crescendo in level—they’ll also increase in stereo spread in relief to the kick. That’s a cool effect for M/S compression.

3. Not making use of a simple EQ in M/S mode

Too many times in M/S we reach for tools that are stereo enhancers, which are fun to use at first, but after a while, can render your whole mix imprecise and feeling washed out.

I wouldn’t put something like an imager—something that plays with M/S signals in broad strokes—on a master as a first option for corrective purposes. They’re great sound design tools, but for subtle work, I would turn to an M/S EQ. M/S EQ can be a wonderful tool for surgically enhancing the stereophonic quality of instruments, precisely because you can be surgical.

Many times in a master, for instance, I’ve come across a section of a tune where I wish the background vocals—layered on the sides of the mix during a chorus—could be just a bit more present. Luckily it the easiest thing in the world to make that happen relatively inconspicuously with M/S equalization.

Simply identify the frequency ranges of the vocals (say they’re between 600–900 Hz), and automate a slight, wide boost of that frequency when they come in on the side channel (say 0.8 dB). With little intrusion, you can raise awareness towards those vocals using that technique.

M/S EQ can also be used in a mix context for carving space, or creating effects, and we’ll get into how in our next sections.

4. Overdoing increases to the S channel

Sometimes we fall so in love with M/S that we can overdo it, especially when it comes to raising the sides. This seems great at first, but you must maintain a subtle hand, otherwise you distort the image of the stereo field in a way that does more harm than good. In a mastering context this can be especially brutal: if you raise the side channel by a large amount, it can destroy the balance between the elements of the mix—a balance the mixing engineer has fought hard to achieve.

It’s tantamount to taking a photograph, putting it in photoshop, and doing everything you can to make the background elements as sharp as those in the foreground. The effect might be cool at first, but look at it for a while, and everything feels a bit off; we’ve lost our sense of perspective, or it feels too unnatural. Everything is pushed way up front and seems overly emphasized. In the sonic world, this can happen when we place too much emphasis on the S channel.

Within individual mix elements you can also accrue this spatially-distorted effect. It might be tempting to increase the width of the drum buss with an M/S technique, but then the kit might feel less real. It’s far better, in my view, to achieve the right blend and balance of drums, to make sure the phase relationships between elements are exactly what you want them to be, and to make sure the space is cleanly delineated.

If you’re going for M/S techniques in your mix before making use of good old fashioned panning, you’ve lost the war before you’ve fought any battle. This is bass ackwards, as the kids would say. Width in a mix comes not from stereo trickery of any kind, but from good, careful, and intentional use of panning—especially with mono elements.

Say you’ve got a stereo piano, a stereo Hammond organ, a stereo drum kit, a stereo bit of background vocals, four guitars, stereo synthesizers, and a horn section. You could put all these stereo tracks up the middle and use M/S techniques to make them all fit, but where would the focus be?

Where would the feeling of impact come from? In a dense mix like this, think you’re far better off eschewing one side of the stereo piano, organ, and synth tracks (or collapsing them into mono). You could, with such a dense mix, collapse the drum kit in mono as well. As the guitars and horns are mono tracks, you can pan them into interesting corners of the mix, along with your newly mono pianos, organs, synths, etc.

Making an intentionally plotted chart of all these elements throughout the corners would, nine times out of time, give you a mix that ultimately feels wider than a whole bunch of stereo trickery across stereo stems.

One of the biggest issues with M/S techniques, especially when deployed across a stereo stem, is that they could very well destroy phase relationships between instruments—or the character of an instrument itself.

Take a piano stem: if were we to engage M/S EQ trickery on a piano, boosting the lows 8 dB on the sides and cutting by a similar margin in the mids, we could result in a track that, when played back in mono, wouldn’t be very audible, because of the mangling we had done to the stereo waveform.

Be careful when engaging in such feats during the mix. When I’m wiling out on a stereo synth, I tend to have a correlator up to look at every once in a while, and if things go too far into the negative, I check everything in mono and make sure I can still hear the instrument. This can help you avoid the mistake.

7. Not addressing muddy issues in a sound source with M/S techniques

If the mix is acoustic and is coming to you with mono tracked elements all easily manipulated, this tip might not matter so much. But if you’re working on synthetic, sampled material—with lots of loops coming to you in stereo from the client or from your own sample library—pay heed:

Say a killer sample is really making the tune come alive, but there’s a problem: it’s heavy in a frequency range that fights with the lead vocal. Now, say that when you cut the frequency range of the sample, you don’t feel it as much in the mix.

Do you give up? No! Here you can use M/S techniques across a stereo source to help carve space. Flip an EQ in Ozone into M/S mode and bring down the mid-channel frequency that rubs you the wrong way. You’ll still hear it in the sides, but the vocal will shine through better. Heck, you could even do this with a dynamic EQ and find your way clear to using M/S compression in an effective way! Indeed, it would be a mistake not to try this out before giving up.

As with many things in mixing, sometimes we like to engage in a technique just because it’s there—that is, we have no intention behind the trick. We all at one point or another have craved a wider mix. But have you ever stopped to ask yourself the question of “why”? If you did, maybe you’d realize that one particular tune might benefit from a narrower approach—or better still, a narrower approach in one section and a wider one in another.

We might increase the width of an element or a mix for a variety of reasons. It might be genre-appropriate to do so. It might be emotionally satisfying to give the listener an enveloped sound stage. Within the context of mastering an album mixed by multiple people, it might be appropriate to widen one song to make it stand up to the rest. Maybe the record was mixed badly and needs widening to aid in avoiding a cold and sterile feeling (so that it surrounds you, rather than sits limply in front of you like badly cooked pasta). Whatever the reason, it always helps to ask yourself the question of why widen something in the first place, rather than just going about the process willy nilly.

This certainly doesn’t comprise all of the M/S mistakes you might encounter, but I believe it’s enough to get your mind going. With these eight common scenarios addressed, you’ll be more aware of the strange terrain that encompasses the M/S technique. Keep in mind the first two tips above all, for I have seen many a mix ruined in those first couple of quandaries. Arm yourself with the knowledge of what M/S technique really does, and you’ll proceed winningly—with caution to be sure, but you’ll proceed nonetheless.