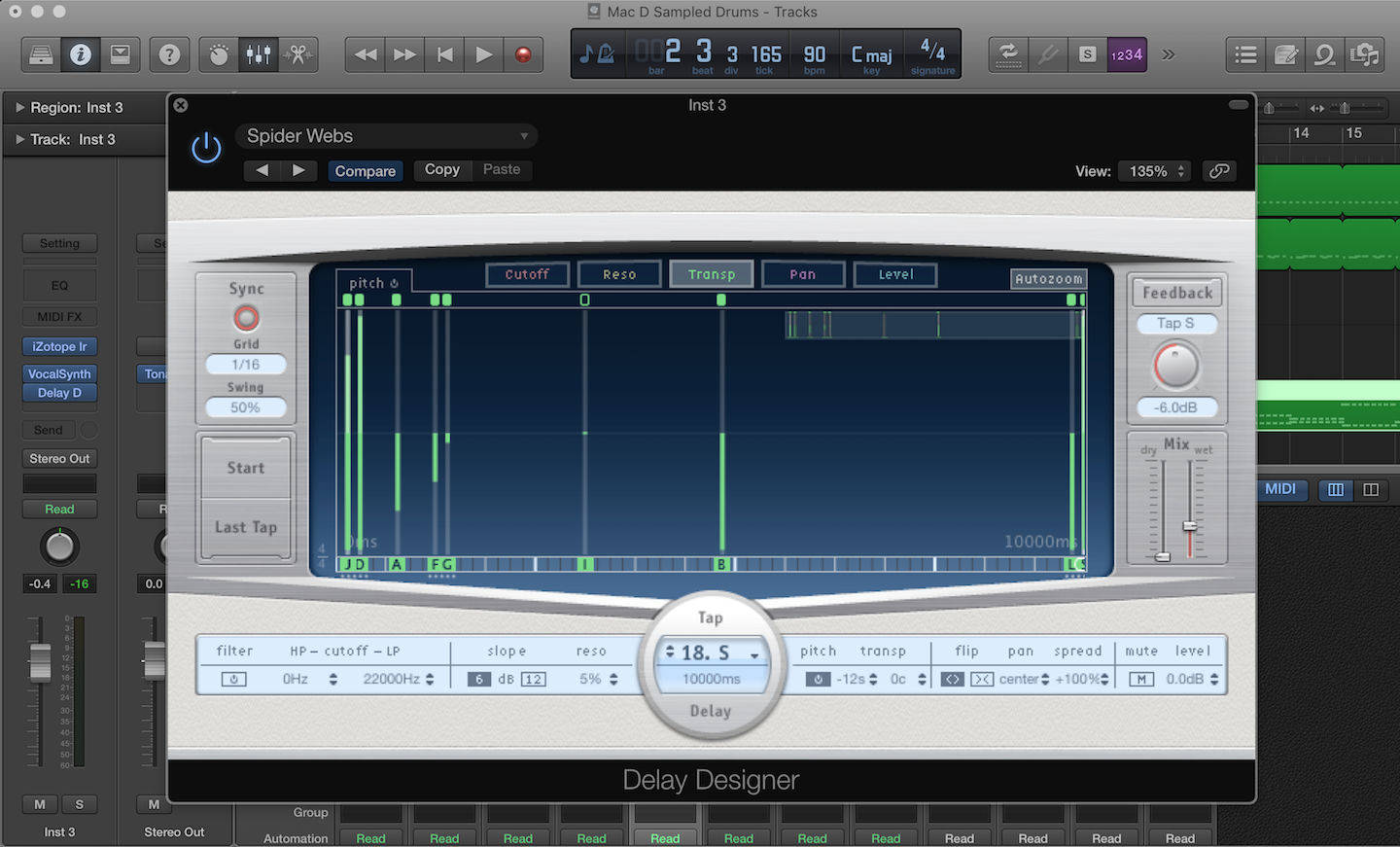 A little more than a year ago, we began a series on common mistakes in mixing, covering compression, EQ, and reverb. Today, delay has its turn. This is a list of mistakes meant to educate, not reprimand. So if you find yourself guilty of some of the following, don’t worry—we all have. Let’s have at it!

1. Not knowing why you’re using delay in the first place

Delays can provide ambiance. Delays can provide emphasis. Delays can change the perceived location of the signal, either in front-to-back perception or in panning (the haas effect). Echoes like slapbacks can indicate genre. Timed stereo delays can reinforce the groove or help to create a new feel for the song.

These are all different use-cases for delay, and not knowing which one you’re trying to elicit is perpetuating a great disservice to your mix, because that way, sloppy accidents lie. Know why to delay, before knowing when and how.

2. Putting delay on every track

Similar to putting reverb on every track, overuse of delay is a big offender in the early career of a mixing engineer—especially when combined with overuse of reverb. Sometimes a track needs to be dry. That’s fine! It comes back to understanding the basic uses of delay: the simulation of an acoustic space, the ability to add a sense of direction to a signal, the evocation of a specific genre, or the fortification/emphasis of a particular rhythm.

This isn’t to say you need to limit your use of delay all that much; Dave Pensado has repeatedly mentioned how Jaycen Joshua piles on delays that, when the mix playback stops, last for days. Same goes for STL GLD’s rapper, Moe Pope, who requested that the producer, The Arcitype, add six bars of delay to his vocals. It’s part of his sound.

The secret to mixing is not unlike the secret to comedic (timing) success (forgive the joke). Delays, which are discrete repeats of the initial signal, are by nature rhythmical, and thus, influential in regards to timing.

Timing can be used in several ways here. To reinforce the spaciousness of a drum bus, you can use a stereo delay perfectly aligned to a subdivision of the drum’s tempo, edged ever so slightly into the mix. Conversely, to stand out more, an element can make use of a delay intentionally unaligned—a millisecond value of a prime number like 23, 29, 31 or 37 can be particularly helpful in this endeavor.

But discretion is called for. If using unconventional timing, you must take great care with the exact value of the delay—you must time it by ear, lest it feel utterly wrong. Likewise, the subdivision of a timed delay is equally important: a triplet subdivision might, for example, add too much swing to an otherwise straight tune.

For example, take a listen to this drum loop:

Drum Beat with No Delay

This is a processed drum loop, taken out of a mix. As you can hear, it has a straight feel. The straight feel is accentuated in the following example by some stereo delay:

I’ve put the delay higher than I usually would in a mix so you can hear what’s happening. Notice, if I change the feel of the delay to dotted and triplet repeats in either side, how the whole feel of the drum loop changes.

This is why you have to be quite careful when timing your delays.

Particularly common in acoustic, live arrangements, this mistake involves not only delaying a sound source, but also delaying its accompanying ambiance—ambiance that holds the sound of other instruments. Imagine the drums bleeding into a vocal mic; when it comes time to add delay to that vocal, the snare is going to echo as well. One must be careful not to induce this kind of effect without intention or else all sorts of weird timing issues can compound, resulting in a muddy image, or other negative impacts that divert attention from the song.

However, if a less filtered sound is called for, a bit of RX trickery can go a long way. All you need is the original track, the offending track that’s causing the bleed, and RX 6; simply use the De-bleed module to create a mult relatively free of offense, and base your delay off the mult, not as a send, but as a separately effected track, with delay all the way wet.

Preset diving is the way many of us learn in the digital epoch, and sometimes speed precludes experimentation with individual delay parameters. But still, too many engineers forget that they have the option to effect the delay further, to process it with external EQ, modulation, or dynamics processing.

Using EQ on the delay will help it sit in the mix, rather than reinforce bloat. If the delay gets in the primary source’s physical space, subtle stereo chorusing on the delay can help the two decoagulate.

The dynamics of a delay are equally important: I’ve gotten lots of mileage when sidechaining delays to a snare or kick for a sort of staccato bounce (you can also blend this in with the original delay to create an even richer tapestry, if the mix calls for it). Sometimes you want the delay to change depending on the dynamics of a given part, and for that, tools like iZotope’s DDLY are quite adept.

Sophistication comes from a musical approach to all elements, and for sophistication, nothing beats the bespoke, hands-on touch of automation. It always surprises me when automating an echo doesn’t occur to a friend or colleague. Why not speed it up as it fades out, if you want to give it some scene-stealing character? Why not control its fadeaway to your exact specifications with level automation? Why not freeze the delay, if that parameter is offered, to create sudden blasts of interest? Why not manipulate a pre-delay EQ to change the overall timbre of the effect?

Of course, none of this matters if you don’t know why you’re using delay in the first place, but you don’t want to miss an opportunity if one presents itself.

7. Not making use of manual delay

Automating a delay is great—until it’s too much work for the simple task at hand; who here has automated a delay for a nice “throw” or single-played repeat? If that’s you, ask yourself the following:

Why didn’t you just mult the throw to a new track, and then place/pan/EQ/render the phrase to your exact predilections?

It might seem like too much work at the outlay, but in the long run, manual delays can be a much faster way to your end goal, and can even save on CPU. Check out how I processed a throw manually in its own dedicated track with some Neutron EQ, followed by a little stock plug-in delay: 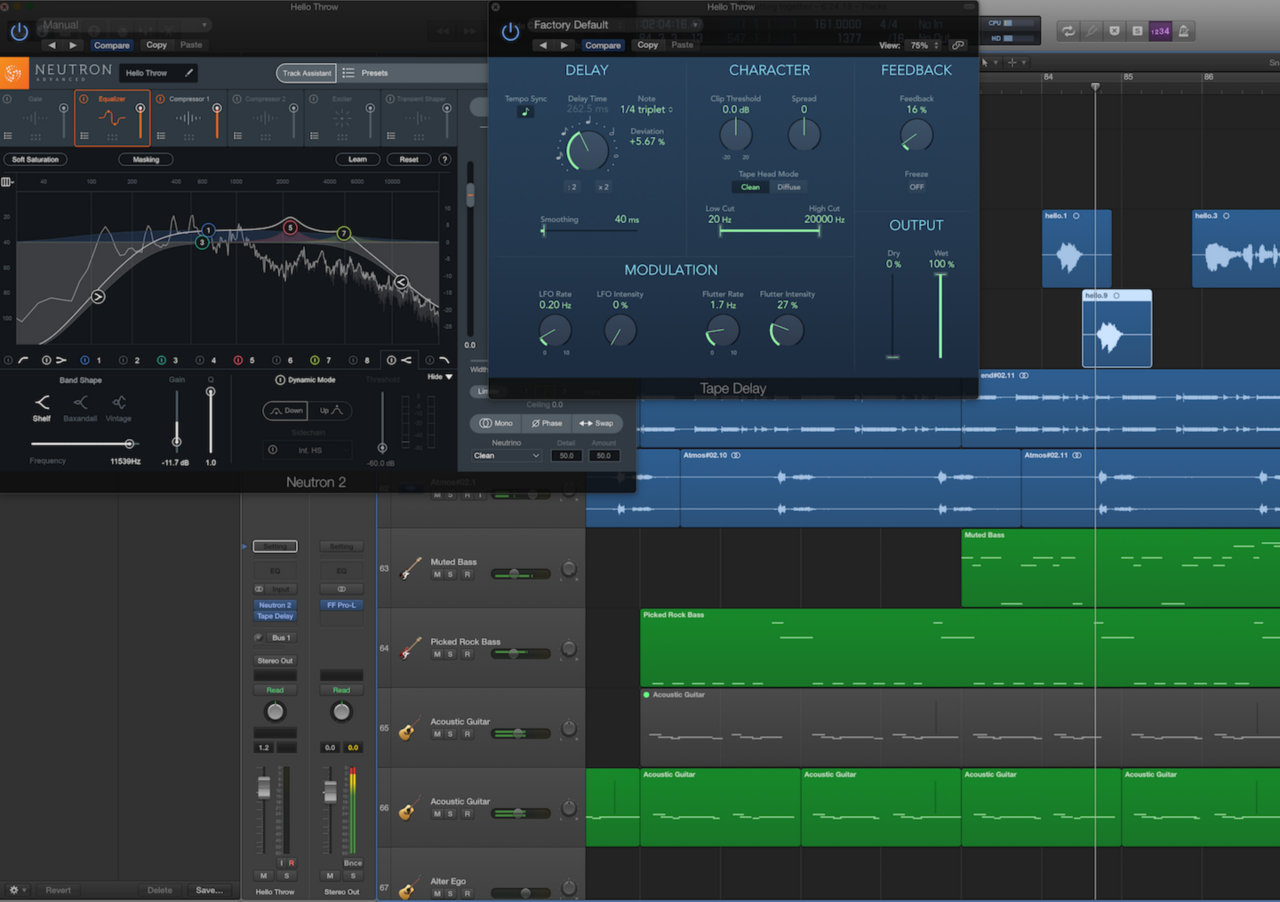 8. Stereo delays that flam in mono

Raise your hand if you’ve ever put on your DAW’s digital delay to create a sense of width—in effect, to create a stereo track out of one element.

Until you monitor in mono, that is; then you hear the unnatural delay slap, like bad flutter echo, or comb filtering. What was suddenly full and lush now sounds like bad acoustics.

What’s the fix here? Not using a stereo delay for panning? No! A bit of manipulation on one of the sides can do the trick. If it’s a melody, I may try a subtle pitch shifter that modulates just enough; done right, it won’t cause attention in the mix, and it won’t have that horrid flam effect in mono.

If I’m delaying a mono percussive element such as a drum loop, there’s no better tool in my box than Neutron 2’s Transient Shaper, which allows me to manipulate the dynamic response of percussion on a multiband basis; maybe a bit more sustain on the snare, or a bit more attack on the kick, will avert the dreaded doubling. 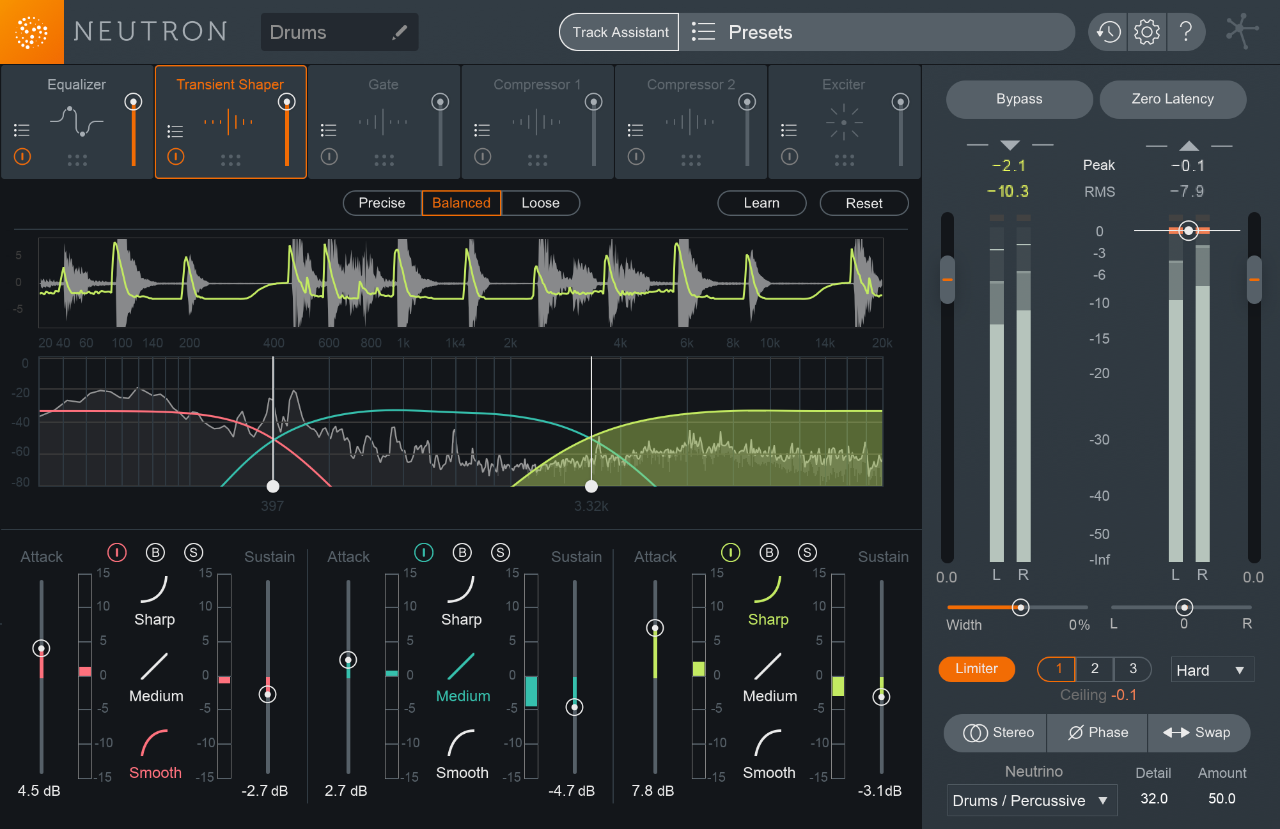 9. Not putting delay on a reverb (or other effect)

Sometimes the biggest mistake lies not in how delay is used, but how it is not used. A good example might be a ballad with a spacious lead vocal. Often, reverb is not enough, because the signal clings to the center vocal in spatial temperament. Here a little stereo delay can go a long way to clearing out the middle, so the vocal can comfortably sit in all that space.

10. Not using delays to create ambiance

This error can often befall people working in sound design, but it also extends to music mixers looking to evoke real-sounding spaces. The most concrete indicator of a space is the quality—and location—of its reflections. To rob an important source of this indicator is to deprive it of the vitality it could otherwise display. You could think of it in these metaphorical terms: The delay provides the fundamental to the reverb’s harmonics.

To make sure you’re always attuned to the way sound delays in certain spaces, there’s no better practice than investigating these places with your own ears. Go into churches of various sizes and listen to the choirs. Hear the vocals as they balance and take note of how they bounce around. Repeat this with exercise with living rooms, bathrooms, barrooms, the great outdoors, and anywhere else you can think of. Pen and paper, as I’m quick to say, goes a long way here to remembering your determinations. You’ll find that when you have a specific sonic image of these spaces engraved in your mind, setting delays will be much more gratifying—and take much less time.

Doubtless, there are more mistakes I could enumerate here, but this covers the basic gamut. It is our hope that thus educated, you can level up without delay.

...by which I mean, without taking too long. Forgive the pun.