Stutter Edit 2 is the latest version of a powerful and playful plug-in that allows you to chop, twist, stutter, toss your audio up into the air, and drop it like it’s hot. Here we learn about what’s possible and a few quick ways to leverage the power of Stutter Edit 2 to take us from boom to BANG!

Stutter Edit 2 gives you immediate and creative access to gestures and sounds that would typically require a slew of devices and a whole lot of thinking to accomplish. The result is massive movement, all with the touch of a button. Let’s take a look at three key techniques we can use to create dramatic and effective transitions in our tracks.

Right there in the name of the plug-in, stuttering is one of the things Stutter Edit 2 does best. A well-executed stutter creates a sense of anticipation and acceleration or deceleration, which cues your listener into the fact that something epic this way comes. You can create really interesting patterns and effects by varying the rate of the stutter, jitter parameters, movement of the sampled audio, and the direction/contour of all of the above gestures over time.

The example below was made with the BT Fractal Frank preset without effects processors engaged and only the Stutter module in play. Variation in the stutter rate, the order in which the audio gets played back or ‘stepped’, the jitter, and panning all come together to create a controlled sort of chaos. These types of stutters and jumps work really well in many different types of electronic music, at any point in a track. 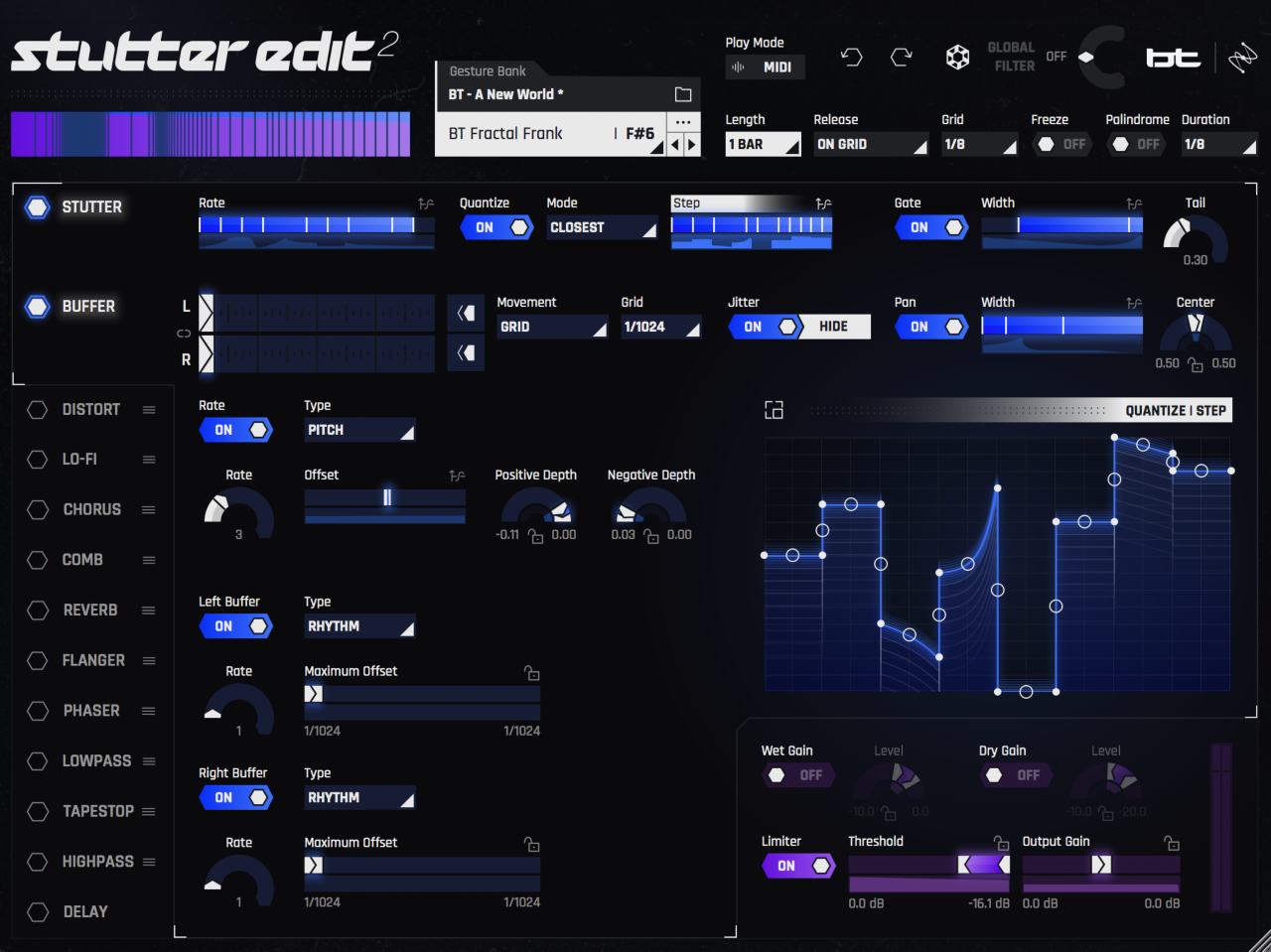 This sweep is sweet

Create transitions with sweeps and delays

A well-placed filter sweep will get the blood pumping, but Stutter Edit 2 gives you several more ways to cut across the frequency spectrum and create interesting textures that will help you crash into your drops and hooks.

For filters, the modules you’ll want to mess with are Comb, Phaser, Lowpass, and Highpass, and for delayed signals, you can incorporate Chorus, Flanger, and Delay. Layering several modules, all with different envelope contours or evolution over time, can let this plug-in truly shine.

In the example below, we’ve incorporated a chorus, a comb filter, flanging, a low-pass filter sweep, and a delay device that kicks in towards the end of the two-bar gesture. What makes this more dramatic is that the gesture’s global release is set to “Stick” which isn’t disengaged until the third measure of the gesture. This was performed into the arrangement with MIDI, triggering the effect with one note, and then ending it by triggering an empty slot assigned to another MIDI note.

Create transitions with a bit of destruction

...but in a good way! The Distort, Lo-fi, and Tapestop devices will crush, stretch, warp, and mangle your audio in a way that adds texture and grit. A little bit goes a long way and they work really well as additions to other combinations of effects.

In this example we have a downsample gesture with some panning which is in palindrome mode, moving its way along the graph and then reversing itself back towards the start.

Then we added in a Stutter effect to the same gesture, which makes the panning much more obvious.

Then we added a low-pass filter to roll off some of the harsh elements as well as create that classic sweep sound. All these together result in something that would otherwise require three different devices, a track parameter, and lots and lots of automation lanes. 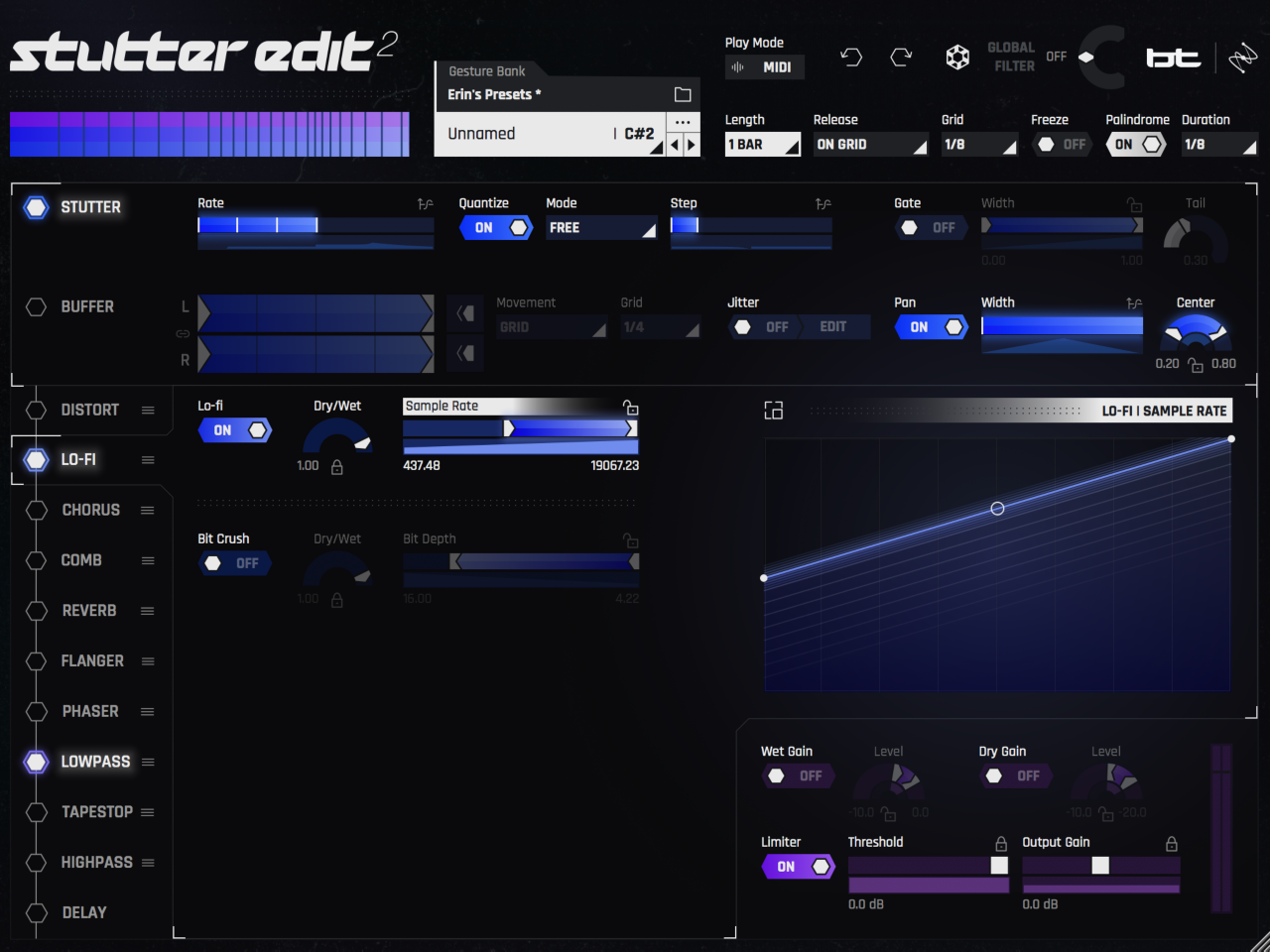 A few classic moves combined to create and clean transition

Put it all together and what do you get?

Where Stutter Edit 2 truly shines is in the combination and stacking of effects and their respective modulations, combined with the ability to trigger those gestures in real-time via MIDI. It’s fun, it’s dramatic, and it saves you a lot of time trying to string all these concepts together and map them to your controllers, all to create a single epic transition from one section to the next. Start by playing with the preset bank and then stutter, sweep, delay, and destroy to taste.