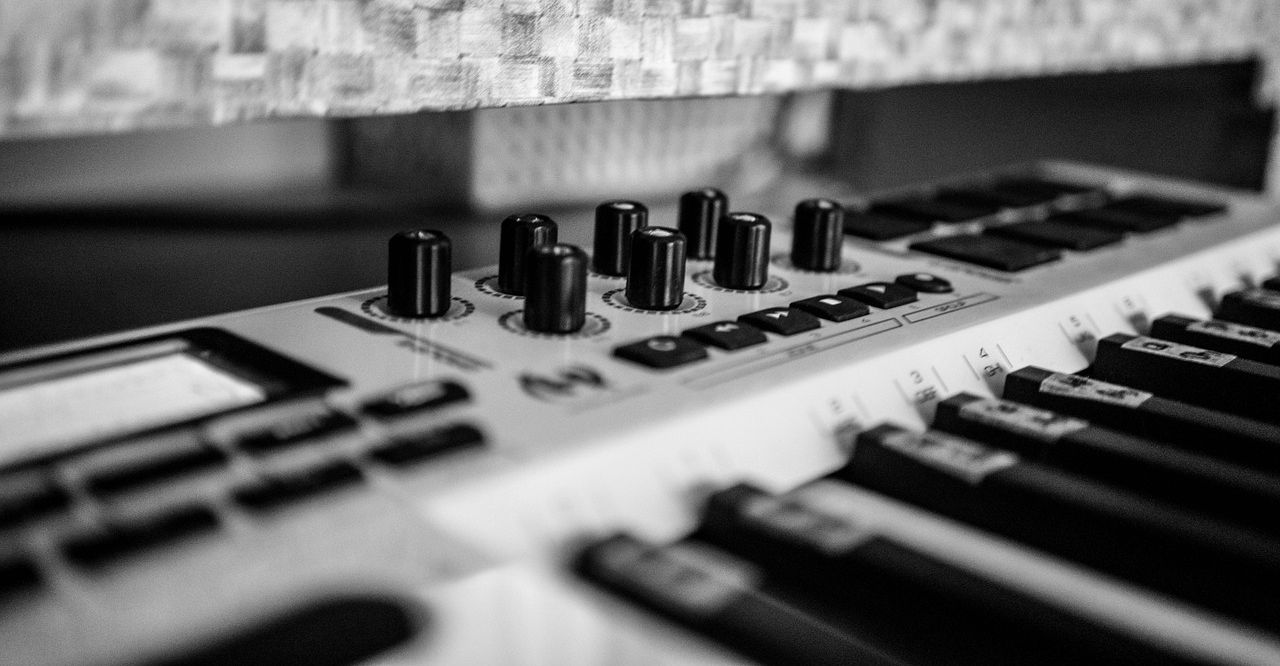 MIDI (pronounced mid-e) stands for Music Instrument Digital Interface. It’s a mouthful when called by its full name, and 99% of the time you’ll hear the acronym being used instead. In a nutshell, MIDI is a specific language that your software and hardware instruments understand. We speak to our instruments by sending them MIDI data and they respond by doing our musical bidding.

Like your refrigerator or your cell phone, the way MIDI data functions is a mystery to most people. Basically, it just works. That is, until it doesn’t or you want to do something specific with it. In this piece, we’ll take a look at what MIDI data is and how the data flows through device chains on your tracks before you start the mixing and mastering process.

The early years of MIDI

Back in the late 1970s and early 1980s, synthesizers were a thing. When I say "thing" I mean, the thing as far as music technology was concerned. This was pre DAWs, pre software instruments, pre MIDI controllers. There were lots of different developers and manufacturers creating new and exciting hardware synthesizers, all of which had similar functionality but worked in their own way. This made it really complex for users, since there was no standard. It also made it difficult to get different pieces of gear to interface with each other.

MIDI data gets sent to an instrument via some sort of device or sequencer. These can come in several forms—it could be a controller with any assortment of keys, faders, knobs, buttons, etc., or it could be a clip or region inside a DAW like Logic, Pro Tools or Ableton. When you play or click in a note, it sends instructions to your instruments, such as turn on, play it this loud, modulate something, play for this long, turn off (or, in MIDI speak: note on, velocity, modulation, note duration, note off) etc. Each message has a very specific order that it gets sent in, which is done using binary code (the 1s and 0s your computer understands), and that is what we call the MIDI protocol.

There’s even a group of people who make up the MIDI Manufacturers Association, or the MMA. They manage the growth and development of the MIDI specification and protocol in all its forms and iterations, of which there have been several. 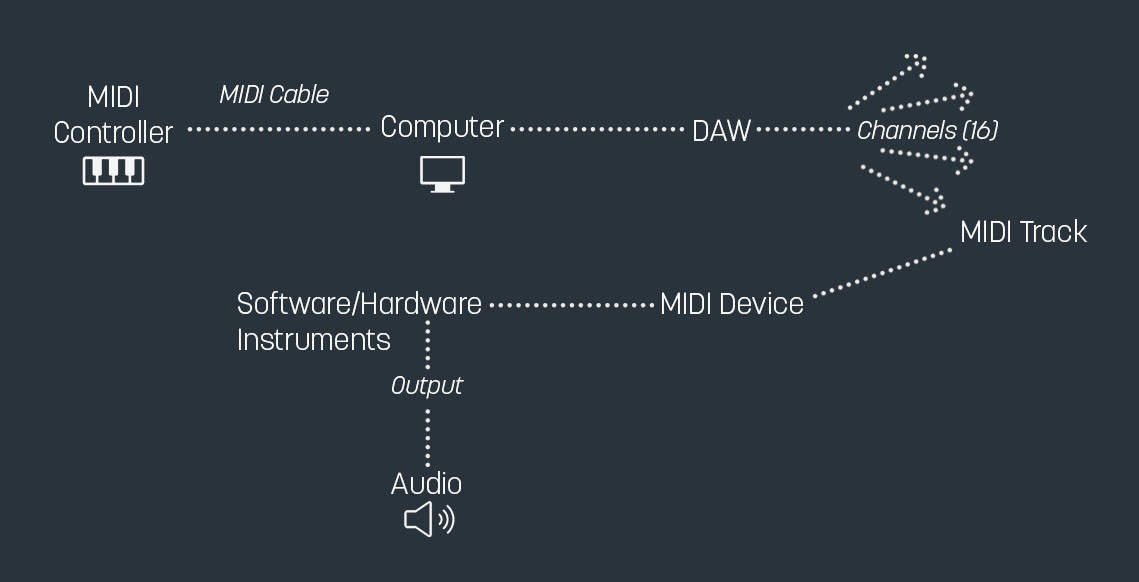 Just like an audio signal, MIDI data follows a very specific pathway as it moves from source to instrument. Let’s look at this two ways; one, which incorporates a MIDI controller, and another, which doesn’t.

1. MIDI messages get played on a MIDI controller, which then gets sent to your computer via some sort of USB MIDI or five-pin DIN cable.

2. Your computer receives these messages and routes them to your DAW. Your DAW then takes the data and sends it to any MIDI tracks set to receive it.

3. Once it’s coming into a track, the MIDI data will first encounter any MIDI devices which are inserted, then the data gets parsed out according to what the device’s purpose is. An example of this in action would be an arpeggiator. An arpeggiator receives a number of notes/messages, such as a chord, then sends those messages out, one at a time, on to the next device. There can be a number of MIDI devices on each track and the data would flow through them in the order they’re inserted onto the track, just like any inserted audio devices.

4. The data then gets sent to the instrument, whether it’s a software sampler or synth, or an external piece of hardware that is capable of receiving MIDI data. The instrument takes the MIDI data and does its musical bidding.

5. The output from the instrument is audio, and that’s where the MIDI journey concludes.

This is much like the first, but removes the controller.

1. A MIDI sequence from inside of your DAW is being played on a MIDI track and sent to the track’s device chain.

2. It will first encounter any MIDI devices which are inserted, then the data gets parsed out according to what the device’s purpose is. (See above.)

3. The data then gets sent to the instrument. (See above.)

4. The output from the instrument is audio, and that’s where the MIDI journey concludes.

There are many more intricate pathways for MIDI data to take, but the journeys outlined above are the most common and  are a great place to start for visualizing MIDI data’s signal flow.

If you’re not hearing sound out of a device you're attempting to send a sequence to, check each point along the signal pathway, just like you would an audio signal. 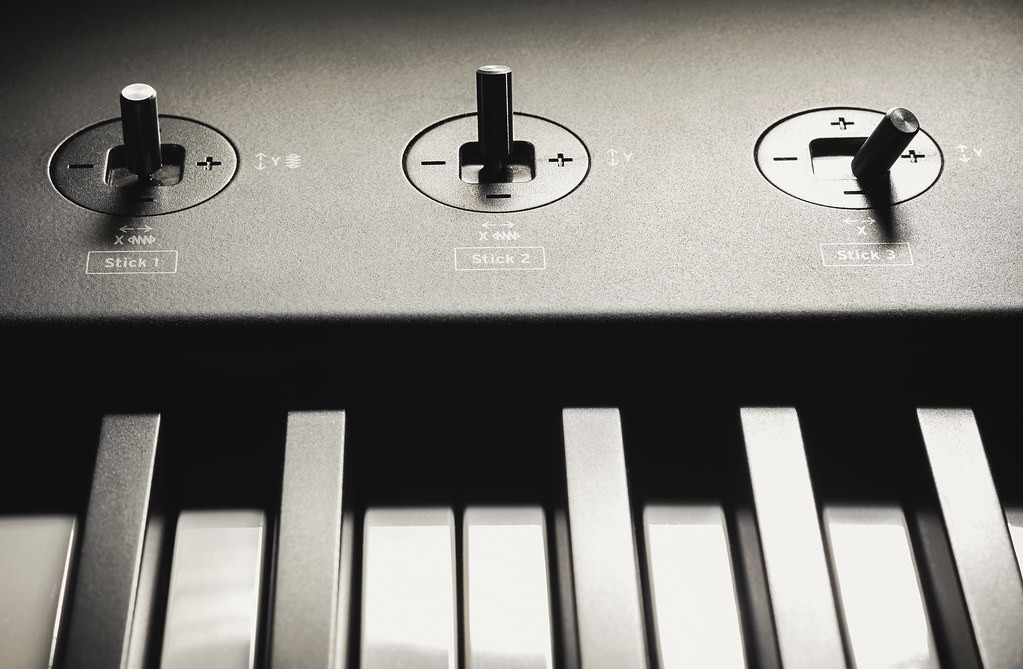 People don’t typically need to know much about MIDI channels until they want to do something more complex than the most common use case outlined in the previous section.

Imagine this: you’re doing a live score of an 1980s period film a la Stranger Things, and you’ve got fifteen different hardware synths in a glorious and tall semi-circle around you. Some have keyboard interfaces that will allow you to play in sequences, but others are only modules that need to externally receive sequences for playback. How will you possibly make it all happen without needing a bunch of extra controllers and cables? Enter the MIDI channel.

Each MIDI cable has sixteen different channels it can send messages on, meaning that it has the power to parse messages out to sixteen different destinations. Think of them like TV channels—we can tune into any number of channels that are being broadcast to us by selecting a number on the remote. In this analogy, the remote assigns the channel and we’re the instruments receiving the messages. The user assigns which channel the messages get sent on and which device will receive messages on that channel. Synth utopia problem solved!

With the advent of MPE data (MIDI Polyphonic Expression) and MPE instruments like the Roli Seaboard, MIDI channels play an additional role, allowing for further expression and complexities, which is a topic for another piece altogether.

The functionality and intricacies of MIDI data aren’t the most straightforward and easy to grasp, but thanks to a generation of extremely smart and technical people, most of us never need to grasp it beyond knowing how to plug in our MIDI controller and arm a track. Luckily, even knowing a little bit about what MIDI is and how it works will take you a very long way. And for those of us who want to pull back the curtain and start operating the controls ourselves, there’s a huge pool of creative and technical possibilities. Next time you see a MIDI cable, take a moment to appreciate what all those 1s and 0s are doing for you.