We’ve received a number of requests for Nectar Elements content directly from you, our readers. In this article, we’ll be looking at how the plug-in works, and what it can do for your vocal productions.

Vocal Assistant for the masses

The power behind Nectar Elements is the assistive audio tech at the heart of the plug-in. While the full version of Nectar 3 will give you a chance to dive into the equalizers, compressors, de-esser, and reverb, Nectar Elements offers a more automatic, streamlined workflow via Vocal Assistant: it will analyze your vocal track and generate a preset tailored to the unique qualities of voice and performance.

When you instantiate the plug-in, you’re presented with the Vocal Assistant window: 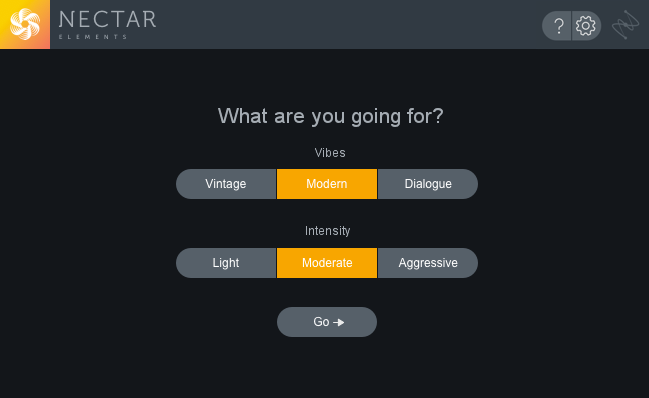 As you can see, you’re provided options for the Vibes and Intensity of the vocal processing. This menu is like telling a trusted production assistant the aesthetic that you want for your music so they can set up an initial patch for you.

For example, you may want a vocal tone with a classic, old-school timbre and a natural feel. Choosing Vintage Vibe and Moderate Intensity is the same as making this request of your production assistant: “I want a vintage vocal that isn’t over-processed.”

Listen to the difference Vocal Assistant makes on a vocal:

When you click Go, you’ll be prompted to play your audio for Nectar Elements to analyze: Once the vocal has been analyzed, a new window appears: 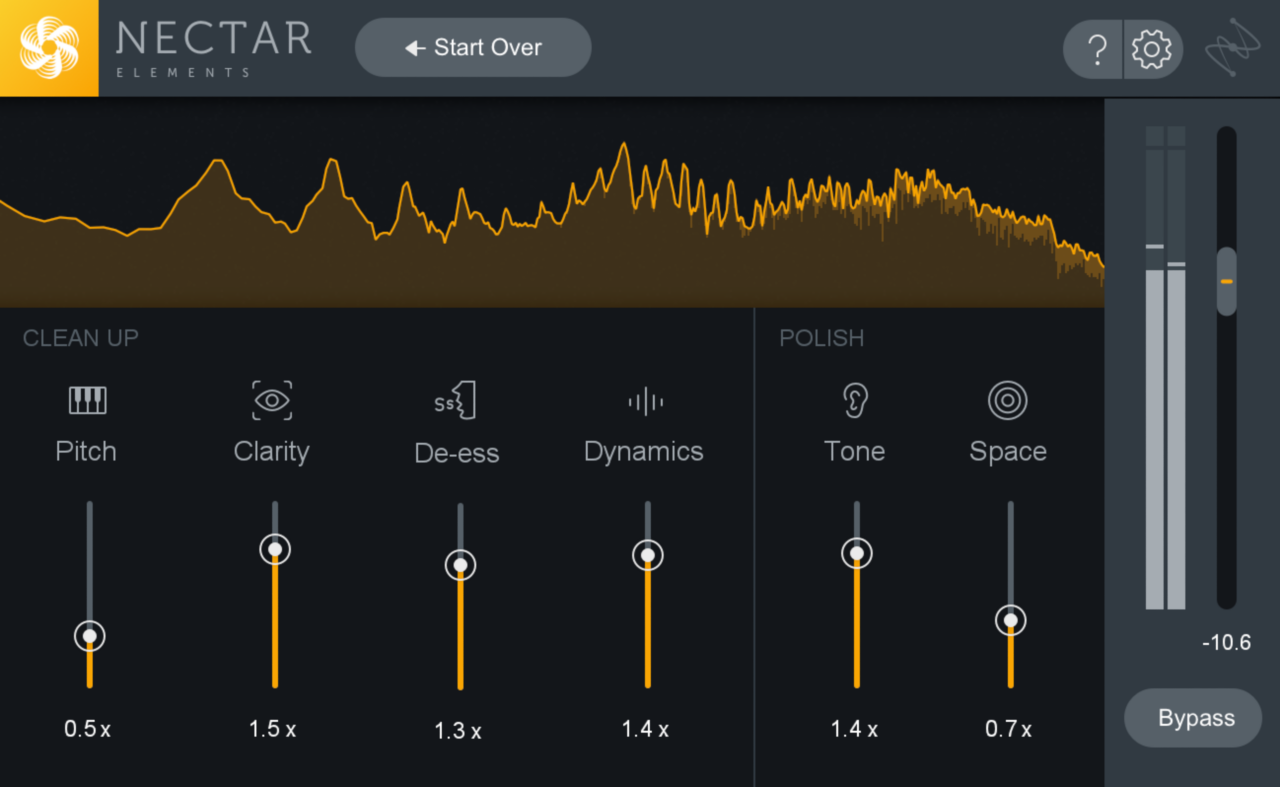 The effect sliders in Nectar Elements

All your parameter controls are now visible as easy-to-use sliders: Pitch, Clarity, De-ess, and Dynamics are your “Clean Up” tools, and Tone and Space are offered as “Polish” tools. You can start the process over again, raise the output level, bypass everything, and observe the frequency response thanks to a real-time frequency analyzer.

So what do each of these sliders do? Before getting into that, it’s worth repeating that all of this is based on iZotope’s assistive audio tech: the way each slider affects your audio changes depending on the input signal that Vocal Assistant analyzes.

For example, the function of the Clarity slider will always be the same, but the way it operates will not: if you analyzed a female R&B vocal, Vocal Assistant would tell the Clarity slider to curtail different frequencies than if you had analyzed a male screamo singer. The slider position would then affect how much attenuation is applied. With this principle in mind, let’s take a closer look at the function and operation of each slider:

The Pitch Slider goes from 0.0 to 2x, and to my ears, it sounds a lot like the Pitch module in Nectar 3. While the Pitch module features adjustable parameters, Nectar Elements is able to determine the vocalist’s range and suggest processing accordingly.

Push the slider to 2.0x, and you’re in robotic Auto-Tune territory—think T-Pain—while a setting of zero disables the Pitch effect. Even at 0.5x, it’s going to go after pitch issues aggressively and “synthify” your voice a bit, as evinced by this example:

You might like this woozy, chorusing effect—it can be just what the doctor ordered for certain styles of R&B, or for stacked background vocals.

In fact, for background vocals, this slider can make each voice sound thicker and larger. Even if the backing vocals are recorded in tune, you may opt to use the Pitch slider on a background stack for that chorusy, thickening effect.

If you’re trying to tune yourself, you’ll most likely get a heavy-handed approach from this slider. For voiceover work, it’s usually best to leave this slider at zero.

The Clarity slider is one of the more interesting controls: it applies subtractive EQ that responds to the specific input signal in order to increase the intelligibility of that specific performance. Vocal Assistant employs subtractive EQ, which can then be tuned using the Clarity slider.

Nectar Elements detects the peskiest resonances in the vocal and works to tamp them down. The intensity of this effect depends on the settings you select before you analyze the audio, as well as where you set the slider after analysis is complete.

If you want to see what Clarity is doing to your signal, you can set up a null test:

Mult—duplicate with the same settings—the vocal track and flip its polarity. On the original vocal track, set all the sliders to 0.0x, except the Clarity slider, which you can move as you see fit.

Set up a frequency analyzer, such as the one in Insight 2, and observe which frequencies predominate. These are the resonances Clarity is taking away.

Note: In some DAWs, like Logic Pro X, you’ll need to instantiate Nectar Elements on the original vocal track, then hit bypass within the plug-in itself to ensure proper delay compensation between tracks for the null test.

The De-ess slider does what it says on the tin: it analyzes where pesky sibilance occurs on the frequency spectrum, and gives you control over how much to reduce the sibilance.

The inevitable caveat: Nectar Elements needs to analyze audio with sibilants to identify what sibilance sounds like in the vocal performance. Sometimes this is impracticable, as a sibilated passage might throw off analysis for the Dynamic or Tone slider.

Here, I recommend looping a severely sibilated passage first for analysis. When you’re done analyzing the passage, keep all the sliders save de-ess at 0.0x. Modulate the De-ess slider to taste.

The Dynamics slider is equally self-explanatory: it analyzes dynamics in the signal and compresses to limit the passage’s dynamic range, providing consistency in the vocal performance.

I can’t go to my trusty plug-in doctor to show you the curves, but I do have my null test from earlier. I can literally take a vocal—any vocal—and show you exactly what’s being compressed with what’s called a delta signal: what the Dynamics slider “takes away” from the signal.

Here’s a dry vocal, accompanied by its waveform:

Here is a vocal that has been compressed after selecting the “Modern” and “Moderate” Vibe and Intensity settings before running Vocal Assistant. The Dynamics slider has been placed at 1.0x, and the vocal has been nulled against an unprocessed track, giving you the delta signal, also visible below. 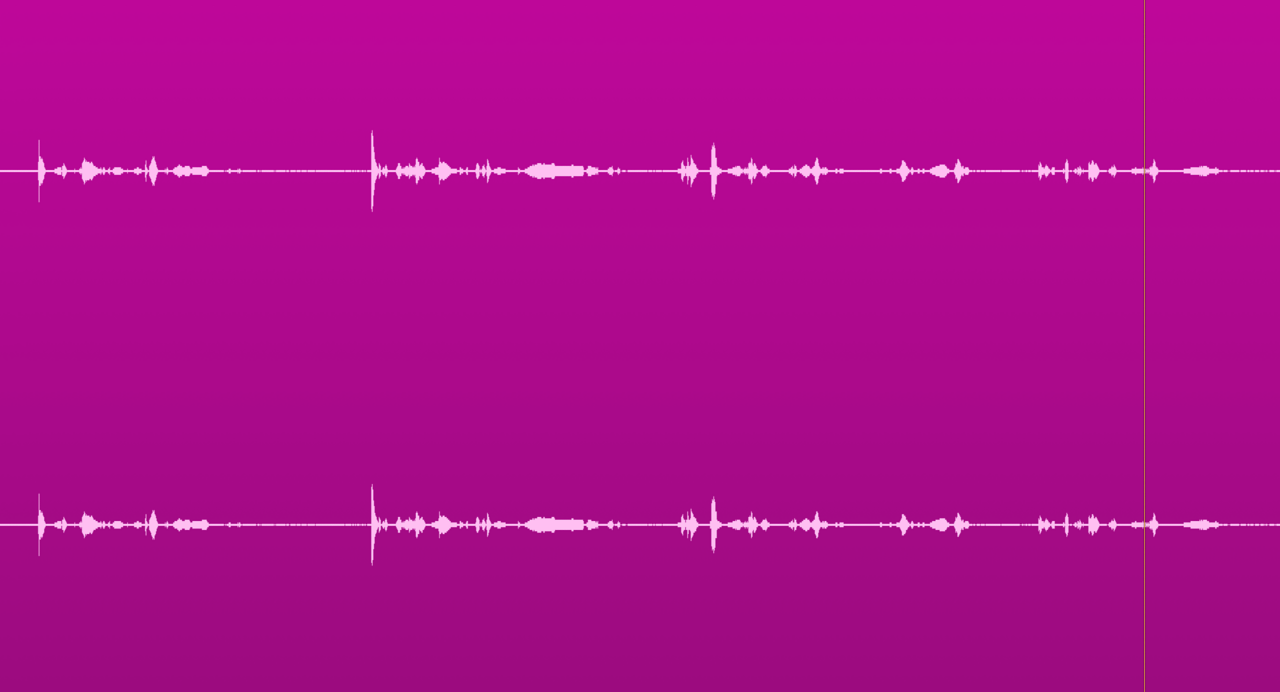 Here it is again with Vintage, Moderate settings. 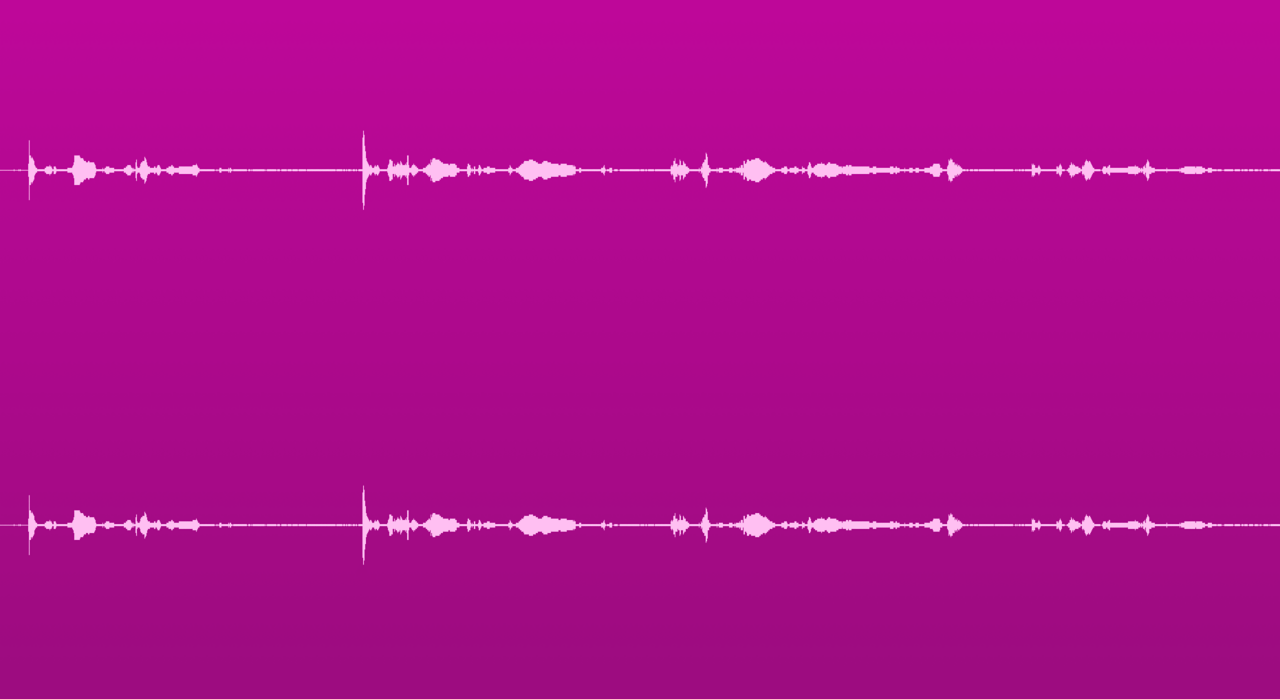 And finally, here’s an example of Moderate processing for Dialogue applied to the same vocal example. From this analysis, we can see that the Dialogue setting is doing the most processing, yet its parameters are also the smoothest and most consistent, with slower time constants and a deeper threshold than the rest. The “Modern” Vibe clamps down a bit harder and faster than Vintage.

Think of the Tone slider as the amount of the vibe you’re going to bring to the vocal. It’s not fair to say it’s a treble boost, because it’s not. Listen to the following example, treated with Vintage processing with a tone setting of 2.0x:

As you can hear, it’s quite dark. However, Modern processing will make things extra crispy and bright.

Think of the Tone parameter as adding vibe rather than treble. Tone controls the amount of color added according to the selected processing type—Vintage or Modern. For Dialogue, the Tone slider does control the relative brightness of the signal.

One of the simpler parameters in Nectar Elements, the Space slider adds plate reverb to your vocal. If you’re using it mono, it will give you a mono reverb. If you’re implementing it on a stereo source, the reverb will be in stereo. It will never be 100% wet.

Many who use Nectar Elements are voiceover artists, podcasters, book narrators, and others who work with the spoken word. It’s often best to be conservative when setting Nectar Elements’ sliders for dialogue. Stay below 1.0x and you’ll be better served than pushing for heavier settings.

That was a peak behind the curtain of Nectar Elements to show you how to use it on your tracks. Hopefully we have gotten to the quintessence of what makes this plug-in so powerful, and how its sound might provide sweet, sweet nectar to the elements of your vocal sound!