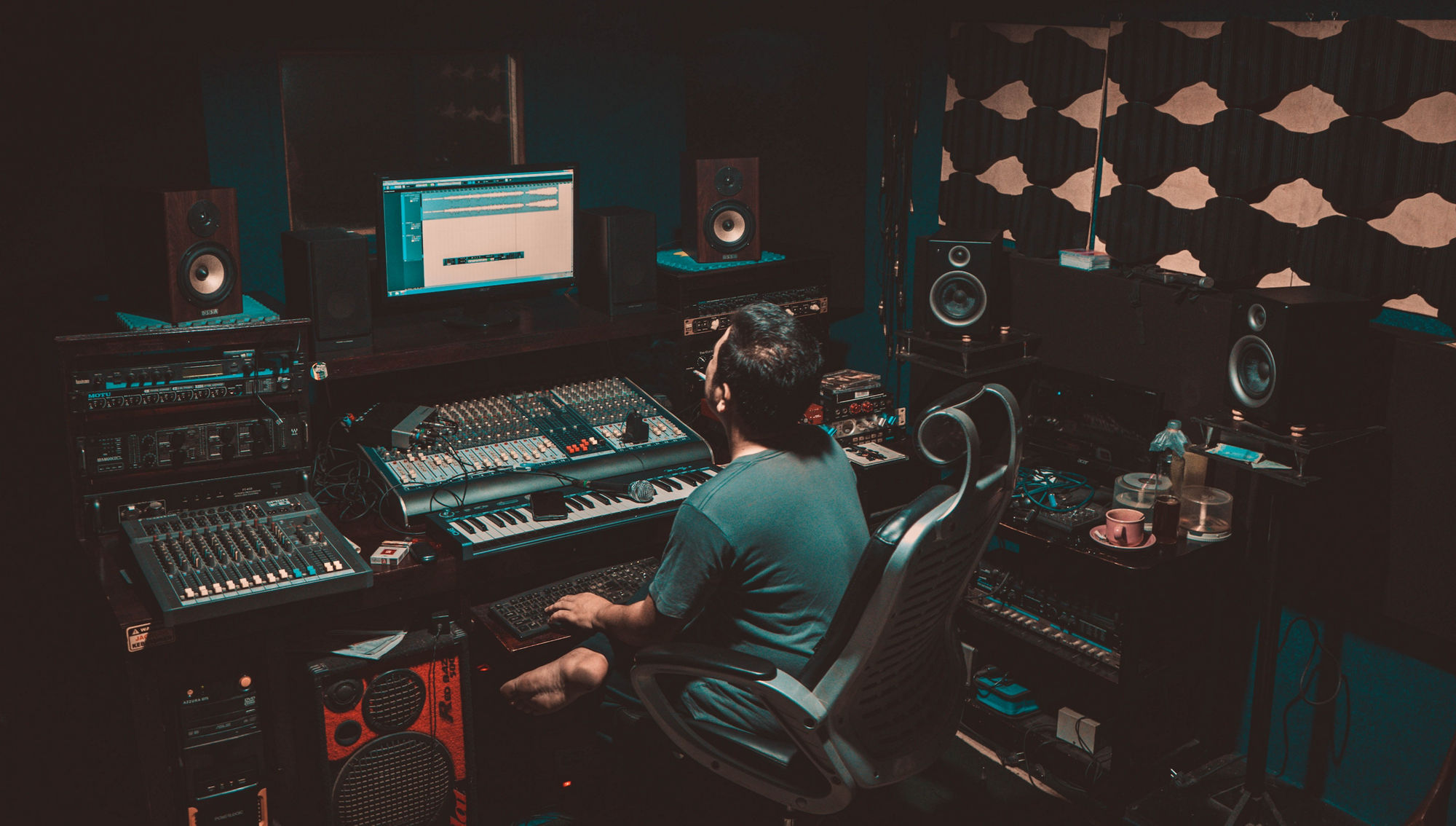 So you have an interest in the technical side of music, and you’re giving mixing a shot. Maybe, you’re mixing out of necessity. This is a common path for many bedroom musicians and producers who don’t want to shell out for professional services but are looking for a polished sound.

For the DIYers out there, this blog is for you—I’ll take you through the tips and tricks I’ve picked up over the years while adding mixing to my resume.

Here are nine tips for mixing if you’re not a mix engineer.

Want to try these tips yourself? Start a free trial of a Music Production Suite Pro membership to access mixing plug-ins including Neutron Pro and Nectar Pro.

Given the fluid workflow of modern DAWs, it’s common to do some mixing tasks as you arrange and produce a song. But the opposite shouldn't be true; mixing is for mixing decisions, and your song (assuming you also are the producer) should be complete before you get into the finer details.

Imagine you hired a mix engineer instead. You wouldn’t send them stems if you were eventually going to reprogram the drums or add some harmony parts, would you?

Once you’re happy with the production, export the tracks to audio and import them into a new session. This will allow you to transition into engineer mode more smoothly.

People expect certain qualities from the genres they listen to. A hip hop mix will have more heft than a folk mix, and a jazz mix will be warmer than an EDM mix. Blending into the crowd, at least in terms of level, frequency content, and structure isn’t such a bad thing when it comes to mixing. For this reason, keep a few genre-appropriate reference tracks nearby to listen to before and during the mixing process. Tempo, mood, and the instruments used in the references should be considered too.

If you can find a single song that has all the qualities you’re looking for, great, though it's not uncommon to choose reference tracks based on specific tonal qualities, like an airy, delayed vocal or booming kick drum.

Your own music collection is a good place to start, but you may need to download a few tunes as well. Be sure to secure a lossless file (.Wav or .AIFF) and avoid low-quality YouTube or SoundCloud streams that lack the details you’ll need for accurate comparison.

3. Get some plug-in assistance

While experienced engineers are able to pinpoint problematic frequencies with freakish accuracy, a new engineer can’t always trust what their ears are telling them. That’s why iZotope designed Tonal Balance Control, which offers a unique way to visualize reference tracks.

In short, the plug-in displays the frequency content of your mix against a target. You can choose one of its three presets (Bass Heavy, Modern, Orchestral), or make up your own.

TBC creates custom targets based on a single track—a good option if you have a hyper-specific reference in mind—or batches of songs, which can be the right choice if you want to capture the general flavor of a genre or era.

From here, all you have to do is place the plug-in at the end of your master channel so audio from the entire mix is analyzed in real-time. The blue-green overlays represent the frequency bounds of the reference, and the white lines represent where your music falls within them. Ideally, the white lines should land somewhere within the middle of the bounds, like the screenshot above.

Tonal Balance Control is useful in judging what your mix needs more or less of, at least, in terms of frequency content. It's an objective check when your ears are still in-training or when you’re working in less-than-ideal acoustic environments (which, let's face it, many of us are).

Keep in mind that during sparse sections, like intros and solos, even well-balanced song will move outside of the normal ranges. For this reason, denser parts of references are better for target comparison.

4. Ask yourself: does everything sound good together?

At the core of mixing is getting the disparate sounds in a session to feel balanced together. In the best scenario, nothing sticks out and nothing slips out of focus. And you don’t feel the need to turn things up or down because of an unruly instrument.

In most cases, you can get to an initial balanced state with just two controls: level and panning. That’s it! So for 10–30 minutes at the start of your mix, forget about analog-modeled compressors, dynamic EQs, and all of the other fun tools in your arsenal and return to the basics. Keep in mind that it doesn’t matter so much what each individual track sounds like, but rather how everything fits together in context. This is why we often dissuade people from mixing in solo over long periods of time.

Imagine your mix has a drum kit that is getting lost amidst the other instruments. An inexperienced engineer might respond by slapping a dynamics processor on the kit. But simply turning the drums up, turning everything else down, or panning competing instruments away produces more natural-sounding results.

Which leads us to the next point…

5. Find the focal point of the song

To properly set levels and panning locations, you need to determine what the focus of the song is—something needs to be the center of attention, if only marginally. In R&B, pop, and hip-hop, vocals tend to get the star treatment, whereas instrumental tracks typically emphasize the drums. Other mix elements follow closely behind.

Getting to this initial balanced state is now much easier with Neutron's Mix Assistant. Mix Assistant listens to each track in the mix, places them in instrument-based submixes, then sets a level balance between them, based on a focus track chosen by you. After the analysis, you can switch the focus, re-classify instruments, and fine-tune levels to your liking. Just be sure the tracks you want to control have a Relay instantiated.

Once levels are taken care of, hop over to Visual Mixer to adjust the pan position of each track and make additional gain adjustments, all with a visual reference to boot. Visual Mixer also offers three “Snapshots,” which allow you to quickly audition different mixes.

6. Re-think your relationship with EQ

Over time, I have found that I use subtractive EQ far more than additive moves when mixing. It's not that I don’t boost—or that you shouldn’t, either—it’s just that cutting away at one sound to make room for another often provides cleaner results than forcing both to compete. Simple as it may be, this is a concept I struggled with for a long time as a producer, so I imagine you are in the same boat.

When you want to hear more liveliness in, say, the low-mids, think about where you can remove those frequencies somewhere else. This can have the inverse effect of enhancing the low-mids. While not always the case, subtractive EQ leads to a better sense of balance (there’s that word again!), less frequency masking, and more headroom.

7. Abide by the law of contrast

Though by no means a recognized mixing law, following the rule of contrast will serve you well. What this refers to is the tendency for producers to overdo it when mixing. Using too much reverb, compressing just ‘cuz, and maxing out the master are a few examples.

Mixing benefits from a sense of contrast. If you want a reverberant feel, some sounds need to be dry to show the difference. If you want depth, make one or two instruments bright and leave the rest darker in tone. If you want the chorus to really hit hard, you have to pare back the verse. It’s difficult to distinguish space or brightness or any other characteristic if there isn’t something else to compare it to.

8. Wait before you turn things up

Really, this tip applies to all stages of the music creation process, but it’s particularly important in mixing. It can take a while to mix a song—sometimes it takes a few hours, but it can easily stretch out to a day or more, particularly for those new to the sport.

If you crank things up at an early stage, subs woofing and all, you will quickly tire your ears and lose perspective on the mix. I imagine you’ve heard and read many cautionary tales about this topic before, so I won’t go into detail except to provide you with our article on listening fatigue and how to prevent it.

That being said, it can be useful to bring up playback now and then—this will reveal the harsh frequencies, particularly in the mids and highs. But do this sparingly. I’d even go as far as taking a break after to reset your ears.

9. Try this trick to quickly reveal and solve problems

So how do you actually get a sense of perspective on the mix? As we’ve seen so far, there are a number of factors that can influence judgment, like room acoustics and playback levels. If you’re mixing your own music, another one crops up: it's hard to separate yourself from the songs you’ve produced or played instruments on.

One trick is to alternate between the various monitoring environments in your home studio. Switch your main playback output to your laptop speakers. Then play the mix out of your phone’s earbuds. If you have a set of headphones, give it a test run there too.

As you try out these different playback systems, you’ll notice certain recurring issues crop up. If hi-hats crowd the vocal on your laptop, you probably have to tame the sharp highs. If the lows are lacking, then you need to pay more attention there.

This is a bit of a hack when you’re not exactly sure what to do, but you know something needs to be done. Simply changing your listening environment will shed new light on your mix.

You’ll notice that I didn’t get into too many technical tips here, instead choosing to focus on the mixing process. The reason for this is that many of the tools you’ve become familiar with as producers are still useful in a mixing context, so you already know how to use them. And without hearing your mixes, I couldn’t possibly give a blanket statement on how much compression to use or what reverb sounds better.

Making the leap to engineer is, in my opinion, a matter of changing your mindset, as opposed to the plug-ins you use. Over time, you’ll invent your own system based on the equipment you have and your chosen genre.