“Crest factor” may be one of those terms that you’ve heard thrown around by mastering engineers that has always left you scratching your head. What exactly is it, why is it important, and how can you use it to inform your own decisions while mastering?

Simply stated, crest factor—sometimes called peak-to-average ratio—is the difference in decibels between the peak and average levels of a signal. In the strictest technical sense, it only applies to steady-state signals like sine, square, saw, or triangle waves. In that context, a crest factor measurement might look like this: 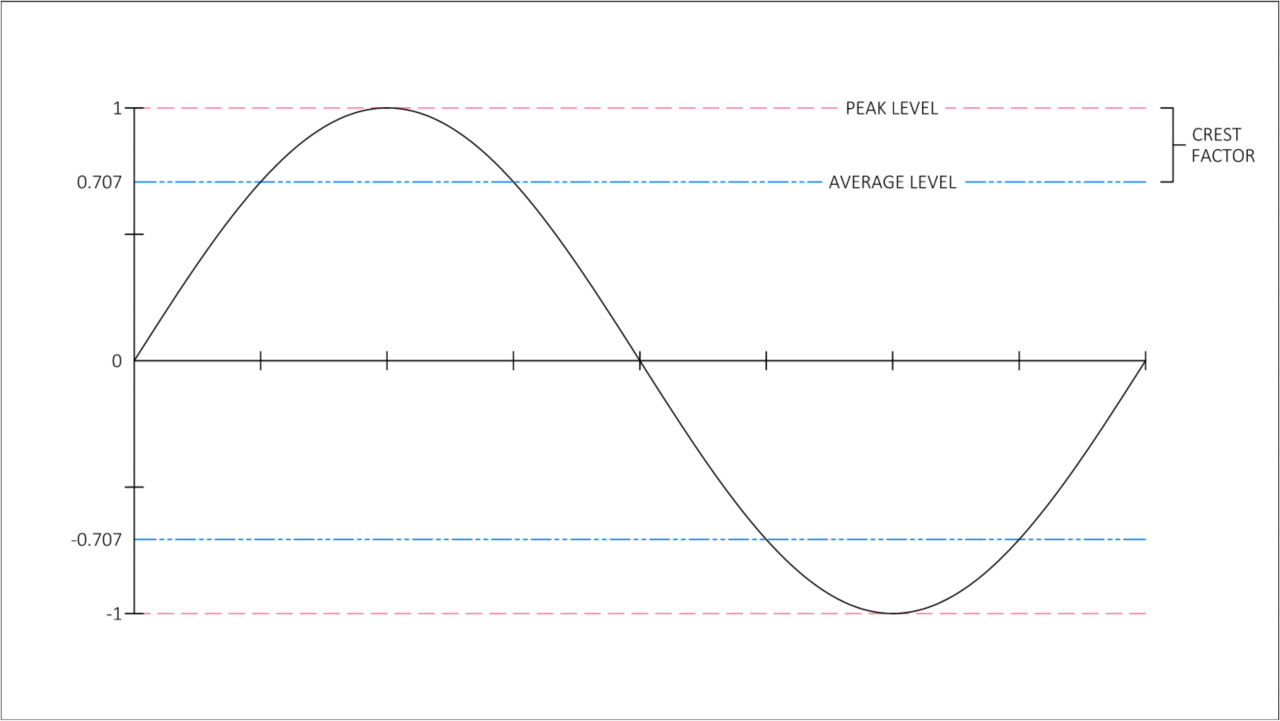 Crest factor of a sine wave

If we do the decibel math, we see that the crest factor of a steady sine wave is 20*log(1/0.707) = 3dB. So far though, we’re thinking like electrical engineers. Two things happen when we make the transition to audio engineering:

First, most audio level meters show the R.M.S.—or average—level of a sine wave to be equal to its peak level. This is based on the AES17-2015 standard and has the consequence of giving sine waves a crest factor of 0 dB. Second, we deal with musical signals which, at least in most cases, don’t consist of steady-state tones. However, with a little appropriation and creativity, we can turn the concept into one that’s very useful from an audio mastering perspective.

Broadly speaking, when a mastering engineer references crest factor, they are comparing some form of average level with the maximum peak level over the same time window. The average measurements used could be R.M.S. (weighted or unweighted), integrated, short-term, or momentary LUFS, or something else, while the peak measurements could be sample- or true-peak.

So, now that we know what crest factor measurements are describing, how do we interpret them, and better yet, use them to guide our decisions in mastering?

By comparing the difference between peak and average levels, crest factor measurements give us a very good way to judge the balance between transient and sustained elements in a mix, and provide an indication of how to approach compression and limiting treatment. However, as with any type of metering, the numbers must always be taken in the context of the program material.

In order to understand what a crest factor measurement is telling you, it is very useful to have some knowledge of how different types of unprocessed signals read. By eliminating processing that may artificially manipulate the crest factor of a recording, and metering the result, you can gain a general understanding of the nature of these signals and establish a good baseline to compare against.

For example, something like a legato string quartet with no dynamics processing could have a rather low crest factor of 6–8 dB. An unprocessed drum recording however, which has a much lower average level due to the transient nature of drums, could easily have a crest factor of 16–18 dB. Thus, the number alone cannot be used to make a qualitative judgment without knowledge of the material it represents, and in fact, a number is never truly good or bad—it’s just a number!

To put a finer point on it, crest factor is simply a symptom of different types of signals and a consequence of their natural characteristics. Just because two sounds have very different crest factor readings doesn't mean you can infer any qualitative evaluations without actually hearing them. It’s only when you listen to two versions of the same signal with different crest factors that you can begin to weigh the qualitative merits of one or the other. More on that below.

With that in mind, let’s think about the crest factor of something a little more middle-of-the-road: a punchy, well-balanced mix, without much limiting. At the risk of sounding cliche, I’m going to suggest something (really, almost anything) from Steely Dan’s catalog. What we’ll see is that during sparser sections, like verses or solos, the crest factor typically hovers between 12–15 dB, while during denser sections like verses with stacked vocals, the values will come down to the 9–12 dB range.

These ranges provide a great baseline for comparing other mixes and masters, but before we move on, let’s think one more time about context. If you have a short section of a song where the drums drop out and a sustained vocal and guitar chord rings out, the crest factor may drop as low as 6 dB (or less). That’s not necessarily a problem, but rather a symptom of that particular arrangement element.

Now that we understand what crest factor is, and what a normal range of readings can look like, let’s think about how we can use this knowledge to guide our decisions about compression and limiting during mastering.

If we’re listening to a finished mix and notice that the crest factor is on the higher side—perhaps higher than 14 or 15 dB—this is a good indication that the transient elements in the mix may be a bit hot compared to the sustained elements. If the mix is yours, this is a good opportunity to go back and address things at an individual track level. Perhaps the snare is a bit hot, or maybe the drum bus could use a little saturation or limiting.

If you’ve received a mix from someone else to master, then this is a good opportunity to have a conversation with them about their objectives for mastering. It could be that a combination of targeted, fast-attack compression and limiting will get you to a place where everyone is happy. On the other hand, it may be necessary to discuss mix revisions that will reduce the load on the mastering processors.

Conversely, if a finished mix has a crest factor much below 9 or 10 dB, there are a few things to consider. First, it could mean that your job as a mastering engineer will be fairly easy. Get the tonal balance right, apply some gain to make use of any available headroom, and have a nice day. Alternatively, it could be an indication of a missed opportunity for some punchier drums (assuming that’s desired), or of overprocessing at the mix stage.

In the end you’ll likely find that masters with a crest factor between 8–12 dB work well across a wide range of playback systems, all while still sounding full and punchy.

It’s worth pointing out that for contemporary pop and EDM releases, it’s not uncommon to see crest factors of 5 or even as low as 3 dB. The music world is full of opinions on whether this is part of the sound of those genres, or an unnecessary casualty of the loudness wars. Suffice it to say, achieving these kinds of levels without egregious distortion takes great skill and care on the part of the producers, mixers, and mastering engineers who work on these records.

There are also a few special ways to measure and think about crest factor that can be very useful in mastering. If you’ve ever noticed the low-frequency crest factor indicator in Tonal Balance Control 2, this is a hint. Just as crest factor measurements can tell us something about the overall balance of transient and sustained sounds, restricting the measurement range to certain frequencies helps us learn about the balance of instruments within those frequency boundaries.

Let’s think specifically about low-end crest factor for a moment. Low end can eat up a ton of headroom in a mix. This is generally because our hearing is less sensitive to low frequencies, so more level is required to make low frequencies sound as loud as mid-range and high frequencies. As such, finding the right balance between transient and sustained elements in the low-end is crucial to achieving a full, yet punchy sound.

Higher low-end crest factor readings (skewing to the left side of the indicator in Tonal Balance Control 2) can suggest that the balance between low-end percussion, such as a kick drum, and sustained elements like basses or synths may be biased toward the percussive transient content. Conversely, a low crest factor reading (skewed right on the indicator) points to sustained elements that are dominating the percussion.

Note: Can’t remember which end of that indicator is which? Look closely: the symbols to the sides of the indicator represent a transient and sustained waveform, or a higher and lower crest factor, respectively.

It’s worth noting that in Tonal Balance Control 2, the low-end crest indicator is intelligent in that it is genre-dependent and compares your song against a look-up table based on the results of a neural net. The end result is an indication of how the low-end crest of your song compares to other songs in the same style. If the indicator is outside of the middle third, you can address this by adjusting balances in the mix, but there are also a few ways to address it in a master:

By using these techniques to manage your low-end crest factor, you create a more balanced sounding master, and potentially buy yourself some additional headroom to increase the overall level a bit.

Hopefully this has helped you unravel what’s behind those two little words, “crest factor.” As with just about any audio meter, a crest factor measurement doesn’t tell you much in a vacuum. With the added context of the program material behind it though, it can be an invaluable tool for assessing and optimizing the dynamics of your music.

While there are plugins designed specifically to measure crest factor in different ways, any good combination peak and average meter—like the one in Insight 2—will allow you to infer the values we’re talking about. So pop open your favorite meter and start experimenting to hear the effect that manipulating crest factor can have on your music. Good luck, and happy mastering!

Learn about other helpful measurements for mastering: