Neoverb is designed to take the guesswork and approximation out of using reverb. Reverb Assistant quickly creates a reverb signal tailor-made to your track, and tools like the Blend Pad, EQs, and Unmask help your reverb sit in the mix without much fuss.

But what if you’re a mild-to-severe control freak (like I am) when it comes to your audio? You might want to dive a bit deeper than the visible tools allow. Thankfully, Neoverb not only lets you do so, but even offers some reverb-warping options you won’t find in many other reverb plug-ins.

In this article, we’ll dive into the Neoverb Advanced Panel and cover some scenarios where it can be helpful to tweak your reverb sound further. Let’s go!

You’ve probably already stumbled across the Advanced Panel if you’ve spent any time in Neoverb. But if you haven’t, you can access it by clicking the right-arrow next to the Reverb Engine Quick Edits section, as shown below: 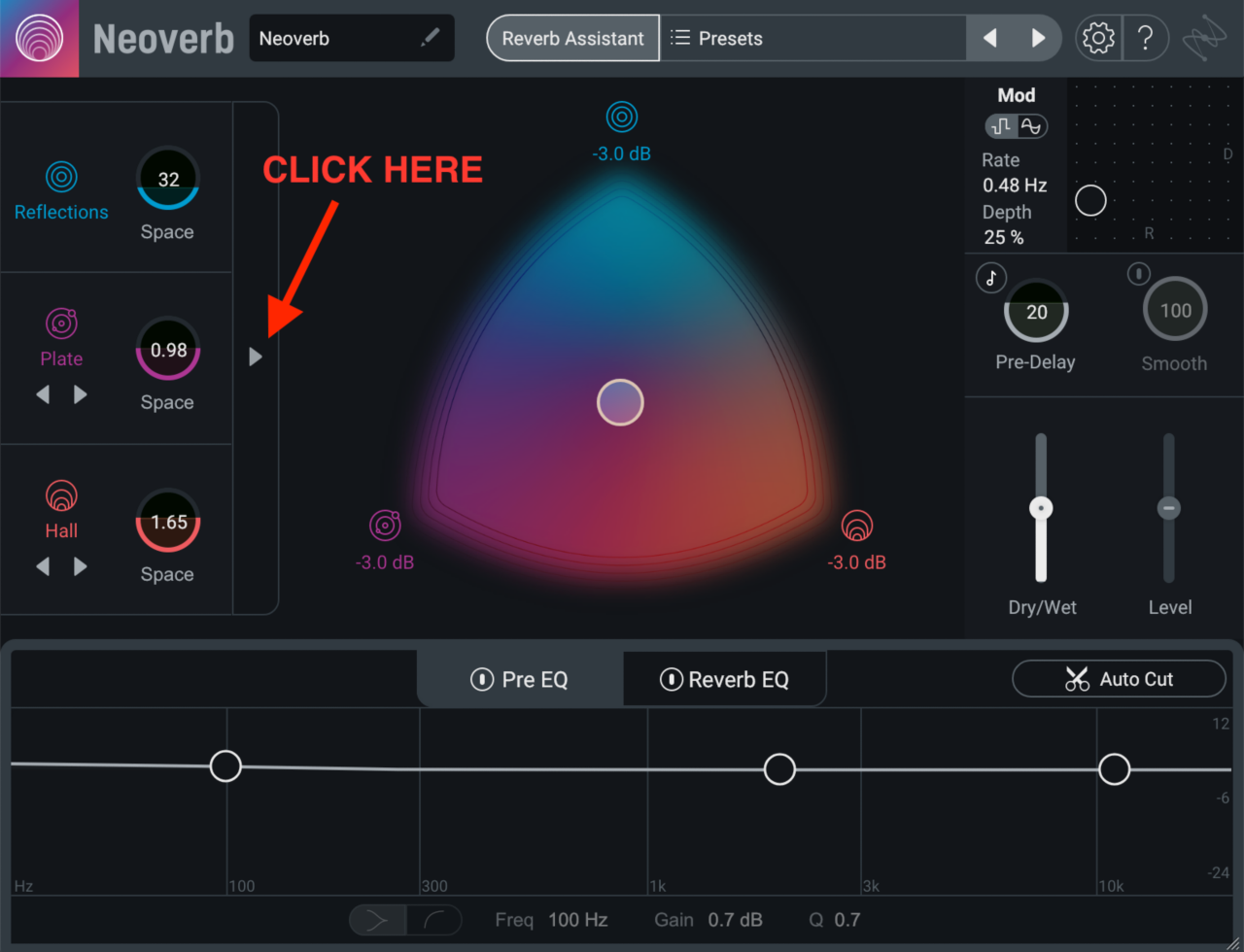 How to use Neoverb’s Advanced Panel

The Advanced Panel is like an extension of the Reverb Engine Quick Edits section, offering additional controls for each of the three reverb engines. Here, we can fine-tune each of the reverb sounds to mesh as we’d like. 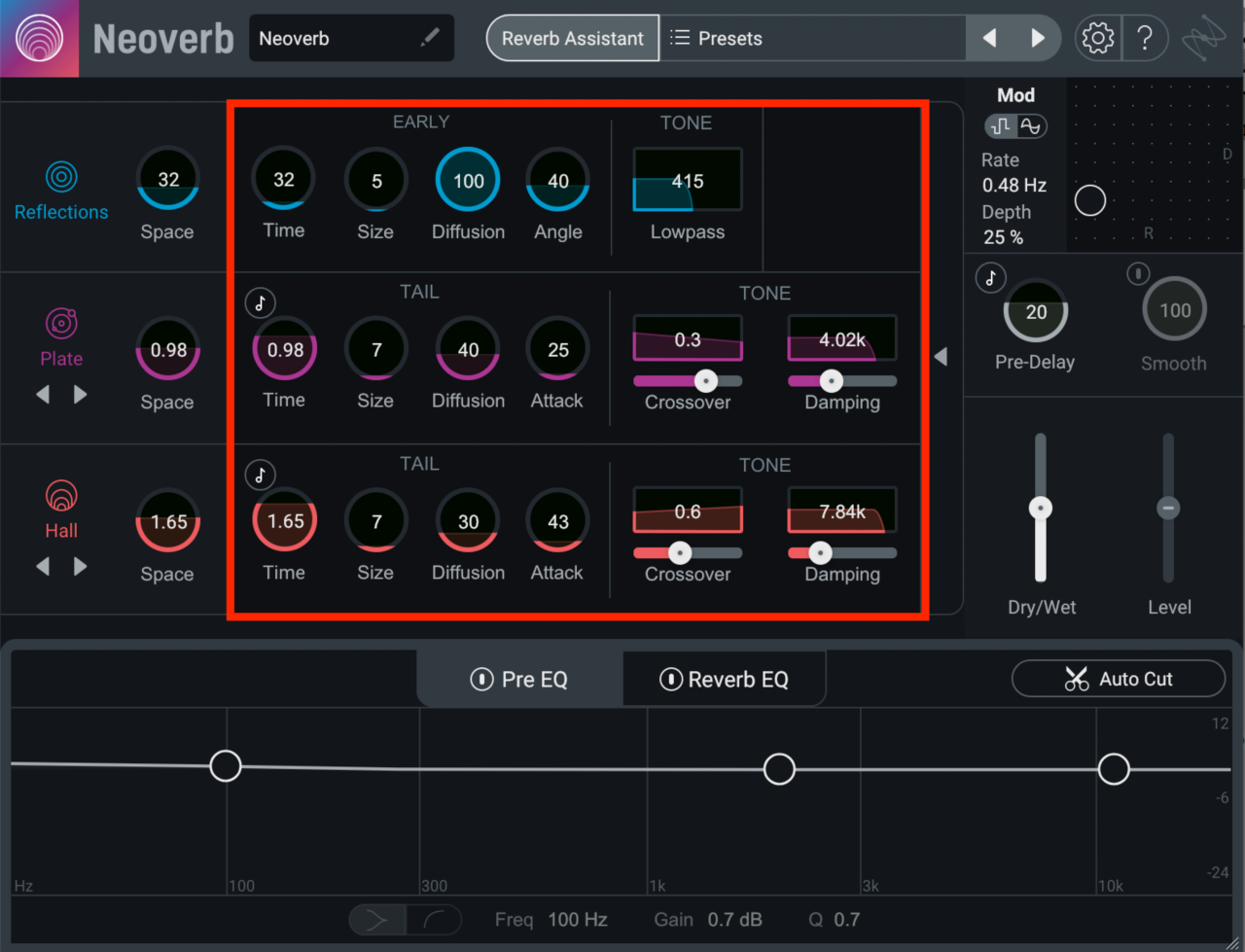 Some of these parameters act differently from engine to engine. But before we jump into that, let’s quickly cover how the Space, Time, and Size parameters work across all three reverb engines. To use Neoverb most effectively, it’s important to understand the interaction between these three and how they affect the reverb sound.

The size of a space determines the time it takes for reflections to travel through the space. The Time and Size controls set the duration of reflections and the size of the room, respectively.

Because these two factors of a reverberant space are linked, the Time and Size controls should be adjusted together to maintain a realistic reverb sound. Space is a macro control that does just that.

Once you’re happy with the ratio of Time to Size, you can simply use the Space control to adjust the overall behavior of the room.

The following screenshots of measurements in Insight 2 compares how these three parameters can affect audio. (Not used to reading spectrograms? Click here). With minimum parameter settings for Space, Time, and Size, you’ll get early reflections that sound like those on the left. With maximum settings, you’ll get the result on the right. The bottom axis shows time in seconds, so you can see that the early reflections are very short, even at the highest settings. 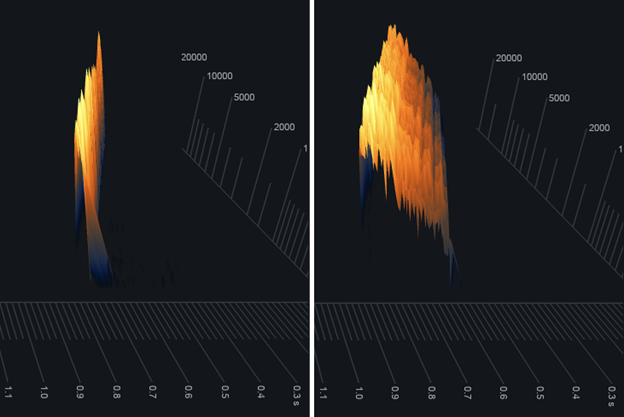 Now that we understand how these three parameters behave across the three engines, let’s dive into the details of each engine and when you may want to adjust each of their parameters.

Not to be confused with Pre-Delay, found on the right side of Neoverb, the Time parameter on Engine 1 controls the duration of early reflections. Because early reflections last only a short amount of time, Engine 1 does this in milliseconds.

As we mentioned before, the Size parameter sets the size of the reverberant space, and does so in meters. Increasing or decreasing this control changes the underlying algorithm to reflect a larger or smaller space.

A relatively common parameter in reverb plug-ins, Diffusion changes the dispersion and density of reflections, in this case early reflections. Lower settings create fewer early reflections with more time between them. As a result, each early reflection is more pronounced, making the reverb almost chatter.

Higher settings of the Diffusion control will create more reflections that are more closely spaced in time. This smears the reflections into each other, creating a smoother wash of reverb.

You may want to stick with higher Diffusion settings for percussive instruments. Lower settings can create more distinct reflections that, unless timed to tempo, might conflict with the groove.

The following image shows a signal with low Diffusion on the left, and high Diffusion on the right. You can see that the right image looks smoother. Note how the divisions between the colored bands aren’t as pronounced. 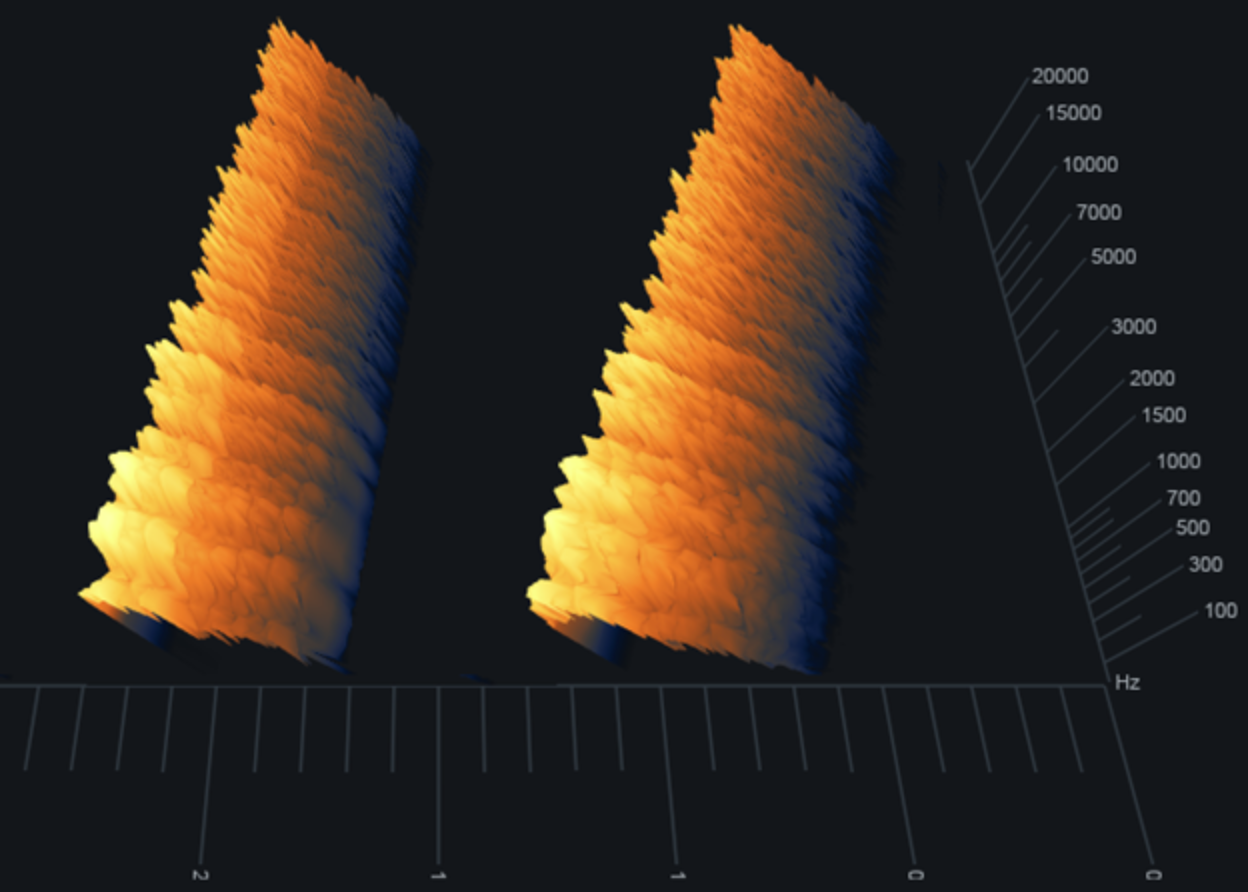 It’s a bit easier to understand what the Angle parameter does once you see the spectrogram view. Here are three settings: at 0, 50, and 100. 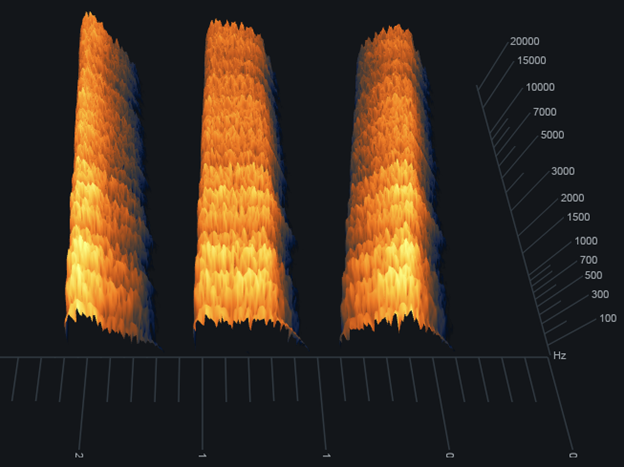 Notice that at lower settings the earliest reflections are the loudest, which gives us the standard, tapered reverb tail we’d expect.

At medium settings, the reverb signal stays around the amplitude of the initial transient for longer. This has the effect of smearing the reverb tail, making it sustain in an unnatural but interesting way.

This is a low-pass filter specifically for the early reflections, and is generally used for tone-shaping. It mostly acts how you’d expect, but it only filters later reflections and leaves the first few unscathed. You can accentuate this effect by increasing the Angle, shifting more amplitude to these later reflections.

In addition to the Reflections engine, which generates the early reflections, Neoverb has two additional engines for the reverb tail.

The parameters in Engine 2 work the same as those in Engine 3, and all follow the reverb type you’ve selected. You can always turn engines off to focus on the sound of one or two, but a benefit of Neoverb is the option to easily find the right combination with the Blend Pad.

The Space, Time, and Size controls in Engines 2 and 3 work exactly the same as in Engine 1, but there are some differences in the remaining controls that are worth calling out.

Diffusion largely works the same in these engines as in Engine 1, but remember: a reverb tail is longer than its early reflections. Because of this, the settings you select for your reverb tail will likely have a larger impact on the overall ‘sound’ of your reverb.

Below is a screenshot of a sound with low and high Diffusion settings, on the left and right respectively. Notice the additional peaks introduced in the screenshot on the right, as more reflections were introduced and packed together with higher diffusion.

The Attack control therefore shifts the peak amplitude of the reverb tail forward in time, by up to 250 ms. This creates a reverb tail that develops a bit longer after the dry audio, preventing the reverb from muddying the sound it’s affecting. It can also produce an audible reverb “swell,” which can be used to dramatic effect in many musical genres.

Below are some screenshots of the reverb response with minimum and maximum Attack settings. Note how the reverb peaks immediately with low Attack, and then decays. With high Attack, the reverb takes a short while to build to its peak before decaying. With the crossover controls in Engines 2 and 3, we can make the reverb effect more prominent in lower or higher frequencies. This isn’t just a static filter: reflections are organically attenuated at different rates, maintaining a natural sound.

The reverb effect is equally prominent across the frequency spectrum with a Balance setting of 0.5, with all prominence given to the low or high band at 0 or 1.0, respectively. 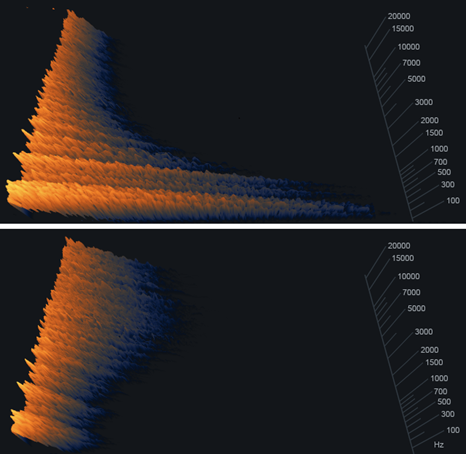 Spectrogram results for 0 (top) and 1.0 (bottom) Balance settings with a Crossover frequency of 2 kHz

Like Crossover, Damping does this with two controls. The Damping Frequency control (the top one) sets the frequencies that will actually be damped; those above this setting will decay faster.

In the illustrations below, all three images have a 2 kHz Crossover, 0.5 (equal) Balance between high and low frequencies, and a Damping Amount of 1 (shortest high-frequency decay). 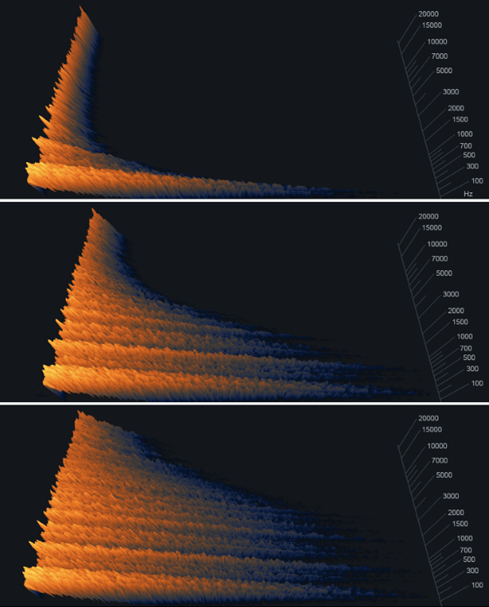 This final image has the same parameter settings as the third one above, but Damping Amount is set to 11 (longest high-frequency decay).

You’ll likely use Damping in general tone-shaping for your reverb signal, as it’s a more realistic way of adjusting the reverb character than a simple EQ. The Damping control effectively lets you “change the material” of this space, as more absorbent surfaces would have this effect on higher frequencies in a real reverberant space.

As you can see, you can find a whole lot under-the-hood in Neoverb. Tools like Reverb Assistant and the Blend Pad are great for finding your starting point, and can often set the right reverb for your track alone. But if you need a bit more control, simply click that right-arrow, expand the Advanced Panel, and get to tweaking!