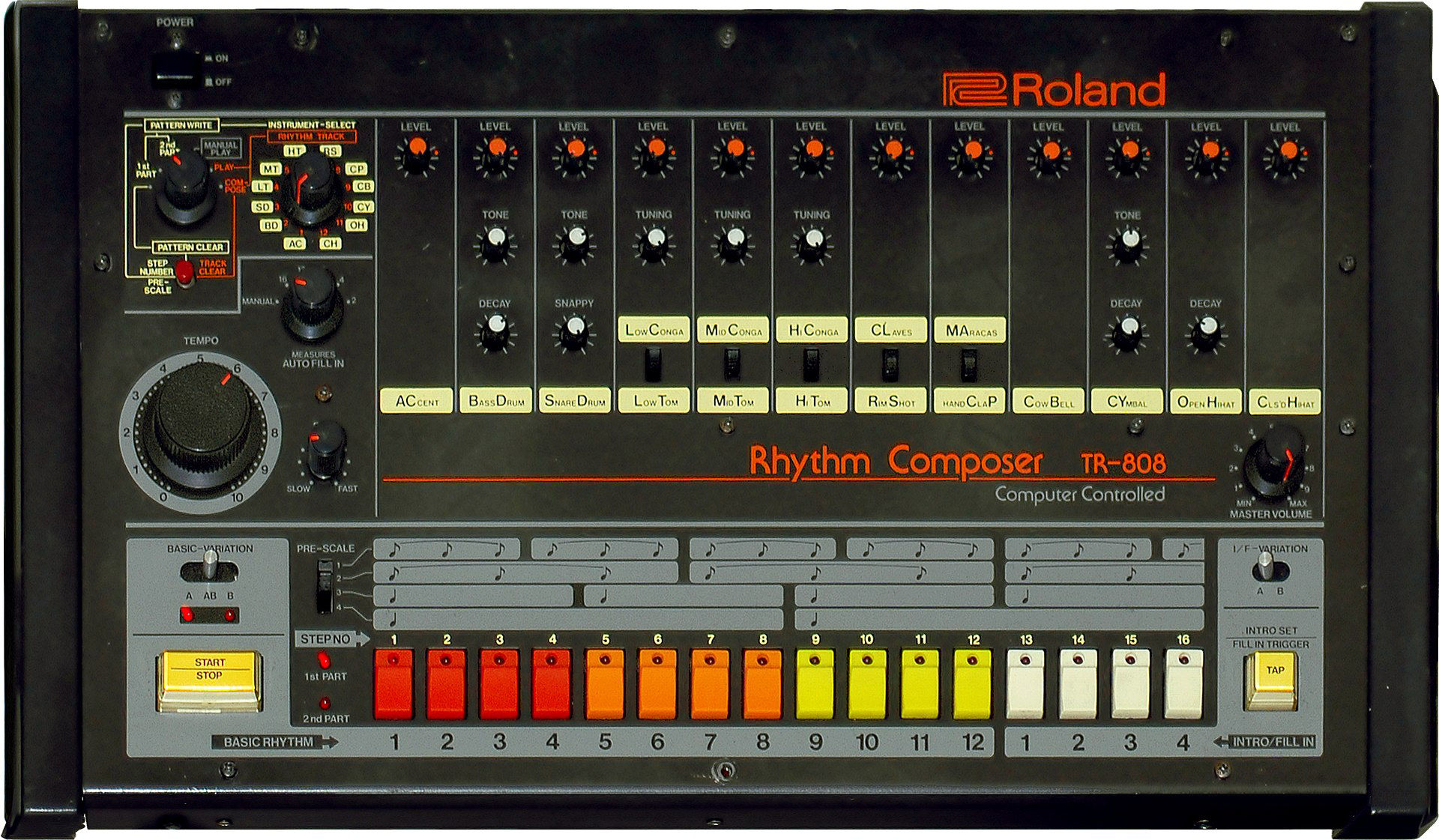 The story of the handclap in popular and underground musical formats of the late 20th century is a long and interesting one. That mechanical sound, first created with analogue circuitry, then replicated with digital signal processing and sampling, is easily identifiable, perhaps because it sounds unlike the human handclap as we know it.

Before the advent of modern pop music, gospel and various types of folk music used the handclap was a common rhythmical element. But the handclap’s uses, of course, are far more ancient and varied.

Historically speaking, the handclap is one aspect of body percussion, a type of rhythmic expression that uses the body as an instrument (sometimes polyphonically) that can be seen in various folk music traditions around the globe, as in the Indonesian Saman dance or as one of several rhythmic media (like stomping) in traditional African music. Developing alongside body percussion was the clapping element in a political spectacle, long before it became standard applause in a theater. In the 7th century Rome, for instance, Emperor Heraclius used a chorus of applause as an attempt to intimidate a barbarian king. Sometime after it had become standard applause in Western civilization, the handclap was used to keep time.

Whatever the culture, the handclap was popular precisely because it is an instrument that everyone has literally in their hands. Beyond the handclap’s role as a natural rhythm generator, it was a means of bringing the audience into the performance. But drum machines changed all of that in a radical way.

The history of the handclap in hip hop, electro, house, and techno really can’t be told without also telling the story of Roland’s TR-808 drum machine. The 808, as it is colloquially known, basically turned the handclap on its head. It was not an intentional act, but one that grew out of the limitations of analogue music technology, and Roland’s own assumptions about how the 808 would be used by musicians.

Before founding Roland, Ikutaro Kakehashi, a Japanese inventor and engineer established Ace Tone, a maker of organs, effects pedals, amplifiers, and drum machines. Kakehashi’s Ace Tone Rhythm Ace series of drum machines featured music technology that would be incorporated into Hammond organs in 1967, and later in Roland’s various rhythm synthesizers. The drum machine that appeared in the Hammond was the FR-1 Rhythm Ace, which was equipped with 16 presets, with players being able to play four parts manually—bass drum, cymbals, cowbell, and claves. This rhythm generator, primitive by today’s standards but cutting edge at the time, would prove to be a major influence on Roland’s later drum machines.

In 1980, eight years after founding Roland, Kakehashi’s TR-808 drum machine hit the market. Because the 808 was designed with analogue circuitry, the drum machine couldn’t come close to replicating the sounds of actual drums; something that would become relatively easier with digital and sampling technologies (first, the sampled drum sounds of the Linn LM-1 drum computer and the LinnDrum digital drum machine). While the Roland CR-78 was the company’s first programmable drum machine that could, thanks to new microprocessors, fade sounds in and out, the TR-808’s sound quality was much improved; though, again, not to the point that it made realistic the percussive elements that now included kick, snare, hi-hats (open and closed), cowbell, toms (low, mid, high), claves, rim shot, maracas, cymbals fill, and yes, a handclap.

Under the hood, the 808 was revolutionary. What was designed as a rhythm section for demos was about to be used for futuristic sounds precisely because it didn’t sound like actual acoustic drums. And visually speaking, the color-coded graphic design layout made the 808 easy to program for musicians, which proved pivotal in its eventual use by electronic and hip-hop music producers.

Advanced as it was, though not as sonically powerful as the sample-based LinnDrum (predecessor to the Akai MPC series), the 808 was a commercial failure. It retailed for what would be over $3,000 in 2018 dollars, and only sold 12,000 units. A price drop to $100 eventually put it in the hands of people who would pioneer Hip-Hop, Electro, House, and Techno. The 808 might have endured had the fault transistors—which gave the 808 it's distinct sound—were still in production at the time. At any rate, Roland went on to make other entries in the TR line of drum machines (TR-707 and TR-909), while musicians began to realize the 808’s potential, particularly with the handclap that really didn’t sound like a handclap.

The handclap in pop, hip hop, and electronic

Shortly after the release of the 808, its artificial drum machine sounds began making their way into hip hop and pop music. The handclap can be heard on Marvin Gaye’s “Sexual Healing,” with a healthy dose of reverb and a little delay. Most people have heard this song dozens of times in their lives, but very few realize that Gaye wrote the beat on an 808. It’s an interesting fusion of the natural, organic sound of Gaye’s voice with the artificial, inorganic sounds of the 808, including the iconic handclap.

As it makes its way into early hip hop and electro, the handclap starts to augment the snare hit, adding some depth and a sort of futuristic crispness to recordings. You can hear it on Afrika Bambaataa & Soul Sonic Force’s incredibly influential track “Planet Rock,” which made hip hop electronic with a combination of Bambaataa’s 808 programming and a clever sample of Kraftwerk’s “Trans Europe Express.” A year later, Cybotron, the electro group of Detroit Techno pioneer Juan Atkins, used the handclap to great effect on the equally influential track “Clear” with some great reverb and delay on it.

Around this time, house music starts surfacing in Chicago and New York. On Jamie Principle’s “Your Love,” arguably one of the greatest early house tracks, producer Frankie Knuckles programmed a repetitive disco beat that included a handclap. Listen to Run D.M.C.’s fantastic first single, “Sucker MC’s”—the handclap is, apart from the kick and snare, the dominant element of the song. It is minimalist hip hop with no melody or chord progression, and this hard, aggressive, and spare style is the perfect counterpoint to Run D.M.C.’s aggressive emceeing.

But it wasn’t just Marvin Gaye, emerging hip-hop artists, and underground electronic artists that were exploring the new textures of drum machine percussion. Listen to Whitney Houston’s effervescent pop anthem “I Wanna Dance with Somebody.” In certain moments of the song, the handclaps shine through as a sort of percussive counterpoint to the other 808 elements. Beyond the young urban artists and producers in hip hop, electro, and early house and techno, it can be heard in the art pop of the 1980s. Look no further than the Talking Heads’ electroacoustic rendition of “Psycho Killer” from the 1984 Stop Making Sense concert film. The unmistakable 808 is all over it, including the handclap, which the Talking Heads programmed to include some great beat repeats.

Rick Rubin, now recognized as one of the best producers of the last 40 years, got his start producing hip hop, and he used the 808 like many other musicians and producers of the day. The first track he produced, T La Rock and Jazzy J’s “It’s Yours,” features the drum machine’s unmistakable beat, including the handclaps, sometimes synchronized with the snare, other times as percussive counterpoint.

Such was the influence of the 808 and the handclap that other drum machines, including Roland’s TR-707 and TR-909, offered their own versions of the percussive elements. Digital drum machines and samplers like the Akai MPCs and the Emu SP-1200s allowed people to sample handclaps, whether from 808s or other machines, and fine-tune them to the artists’ specifications.

By the mid-1980s, the 808, its entirely unique handclap, and the other percussive elements of drum machines were all over underground genres that were about emerge into the mainstream. Music was, in a sense, becoming more robotic, but not really in the way that Kraftwerk had imagined. No, this was about using machines to do things with percussion that had never been done before. Hip hop, house, techno, and a more electronic strain of R&B were more and more using these easily identifiable mechanical beats as the 1980s gave way to the 1990s.

The 1990s brought about a popular de-emphasis on programmable drum machine beats, what with grunge’s emergence and the overall reassertion of rock music and heavy metal on the pop charts. While drum machines, particularly the 808 and its powerful bass and singular handclap, stuck around in mainstream music through hip hop during the 1990s, the sound otherwise retreated into the underground. Artists and producers working in house, techno, acid house, and related subgenres continued using these drum machine sounds, especially within the underground rave subculture, most notably across the UK and Europe.

While artists like Aphex Twin (especially his early work alongside many other notable IDM and ambient techno artists), Daft Punk (on their first big single “Da Funk”), The Chemical Brothers, and Fatboy Slim were able to bring dance music beats into the mainstream throughout the 1990s, it really wasn’t until the early to mid-2000s that the sound would begin to dominate the way it had in the 1980s. It was during this decade that electronic dance music found its way into indie music through acts like LCD Soundsystem, The Knife, Ladytron, and others. This was also a time when DAWS, VSTs, and plugins introduced an entirely new generation to programmable electronic beats. Once again, deep kicks, snappy snares, and that strangely wonderful handclap sound, all of which could be endlessly mutated, were desirable once again.

As if on cue with indie rock’s dance obsession, Daft Punk returned in 2005 with the minimalist and repetitive Human After All, an album full of drum machine sounds that typified the 1980s and 1990s electro, hip hop, house and techno sounds, while hinting at what was to come with EDM. In their lead single, “Technologic,” the handclap is there as a subtle percussive element, relatively buried in the mix alongside the more upfront kick and tom hits. As with many electronic dance and hip hop tracks before it, “Technologic” proved that the handclap could be an element that was as much about overall percussive texture as the characteristic of the sound itself.

On his 2007 album 808s & Heartbreak, Kanye West fused mainstream hip hop’s longtime interest in the 808 with dance music’s more underground efforts with robotic beats. Just a few years early, West had collaborated with Daft Punk on “Stronger,” a hybrid hip hop/dance rework of the French duo’s “Harder, Better, Faster, Stronger,” which hinted at the 1980s fascination with programmable beats, and the harder edge of dance music that was about to develop in America with EDM acts like Skrillex and The Glitch Mob. Of course, Lil Jon had practically made a career out of using handclaps on his tracks, perhaps most notably on Usher’s “Yeah!”, and he was only one of many hip hop artists using such elements.

Over ten years later, the handclap remains a central component of electronic music and music technology, and it’s not just DAWs and VSTs carrying the torch. A new generation of analogue and digital hardware, from the Elektron Digitakt and Pioneer Toraiz to the Korg Volca Beats and Dave Smith Instruments Tempest, all have variations on handclaps and other classic drum machine sounds.

And if one might assume that there is very little that can be done to evolve the handclap, just have a listen to Aphex Twin’s single “T69,” the title cut off 2018 EP Collapse. The handclap is there, folded and warped into the song’s hyper-evolving textures.