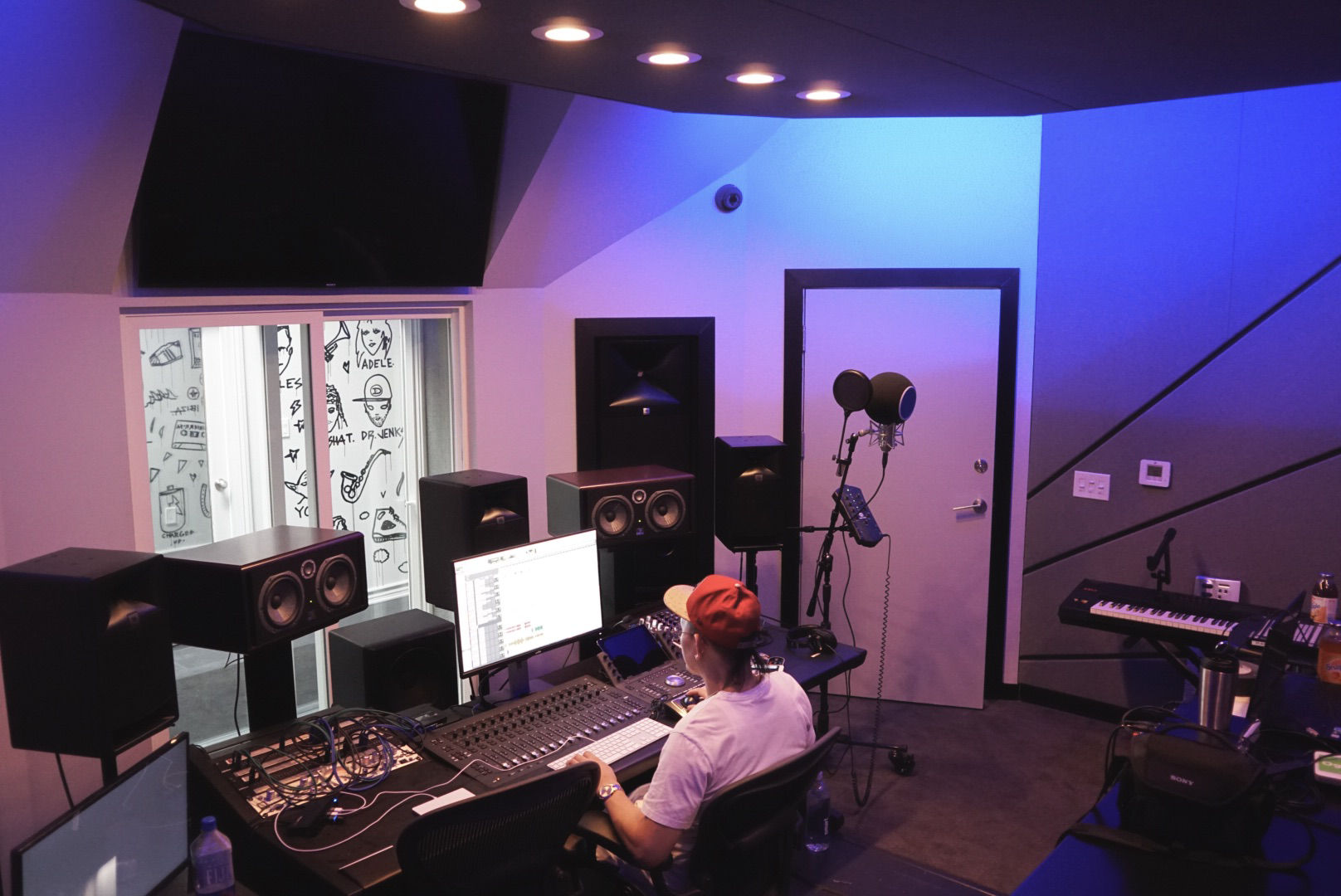 Whether you’re a mix engineer, producer, musician, or anyone else in the music industry, chance favors the prepared—and humble—mind.

David Kim is the mixing engineer for multi-platinum, GRAMMY-winning producer Hit-Boy (Kendrick Lamar, Kanye West, Beyoncé). Kim won a GRAMMY for recording strings on Kendrick Lamar’s 2015 album To Pimp a Butterfly at world-famous Chalice Recording Studio, an experience for which he was prepared when he got the opportunity. In this interview, Kim talks about those recording sessions, working with Hit-Boy, and lays down some invaluable career advice.

“Never think you’re better than anybody else. In the future, you might need the person you once scoffed at.” —David Kim

Check out how David Yungin Kim mixes a song from start to finish, with even more industry tips.

How do you work with Hit-Boy?

Hit-Boy has the artist's eye—he does the production. With the production comes recording demos, recording songs, and working directly with labels. I oversee everything that goes on, along with the editing and mixing.

I work for him directly. We kind of wing it—everything is done independently. He has people popping in every week, and from there we just vibe out and create music the old-fashioned way.

If he's in production mode that day, he works out of FL Studio, or we use analog synths and keyboards. Everything ends up in a Pro Tools rig, which I'm manning. He'll either fly stuff over or record it through Apogee's Symphony [audio interface] or Avid's HDX into Pro Tools. From there, we work on arrangement and mixing before we ship out.

Everything is pretty collaborative—we have at least three or four ears on whatever song we're working on.

How did you guys meet?

I worked at Chalice Recording Studio in Hollywood for six years. I started as an unpaid intern, worked my way up to runner, and then assistant engineer, then engineer. But when I was a runner, Hit-Boy would frequent the studio. I was always a fan of his work, but the first time I met him I was getting his food. I told him, 'We're going to work together someday.'

What was he eating?

I think it was Chick-Fil-A. But that's how we met. From there, we kept in touch. He had engineers, but whenever he needed a fill-in, I would go over and we instantly vibed.

I started working for him part time, a couple days a week, and then it turned into a full-time gig, and I left Chalice five months ago.

Did you get your internship at Chalice through connections from the school you went to, The Musicians Institute?

They tried to get me an internship there, but it didn't work. After school, I was kind of in limbo for about a year. I applied multiple times because that was the only studio I wanted to work at.

I interviewed there previously, and I didn't get an internship, but I saw the facility and all the people that work there. I made it my goal work there, and I just kept applying. And then finally they hit me back, and I got an interview.

Since you're no longer at Chalice, which studio do you use now?

Hit-Boy has a compound. We have two working rooms, and we're trying to get a third. It's two engineers, me, and Nicholas “Sunny” Race, and we work collaboratively. We have a really great workflow, and we also have rigs on our laptops.

What advice do you have for engineers who are mixing at home who don’t have the luxury of a recording studio the size of Hit-Boy’s?

My advice would be listen to a lot of references, and do A/B testing when you're mixing, especially when it comes to EQing.

Now with EQs, you can solo-band frequencies, so you can try to carve your mix the way you hear your references. You just solo 100-500 Hz and try to match it with your mix. It doesn't work all the time, but that's a technique I've been exploring.

I used to be into the loudness wars, but now I'm fading away from it. It helps that you're getting songs mastered by professional mastering engineers.

As a mix engineer, you never really understand how good your mixes are until you get them professionally mastered, and then you're like, 'I guess I can kind of keep up these guys.' Because a lot of times, mastering adds a little 3D spacing and volume.

Where do you and Hit-Boy get your songs mastered?

I read that you also recorded strings for To Pimp a Butterfly?

Yeah, that experience was special. Terrace Martin, Sounwave, and a couple of other producers were really involved in the album at Chalice.

It was kind of a lucky thing that fell into my lap. I had a relationship with Terrace Martin before and was assigned to do that session. We had session players over the span of two weeks, and for two days, we were micing up the whole twenty-piece string section. We would just do takes and takes of every song. A lot of the songs already had synth or VST strings on them, and we were replacing them.

Kamasi Washington was doing all the arranging. After the strings were done, we brought in horn players. After they were done, we brought in a jazz band. Kamasi and Terrace played horns, and Robert Glasper was on grand piano. It was the most special experience that I've been a part of—I had never been a part of such a musical session. There was so much talent in there. Working out of LA, you don't really experience that as much as, say, Memphis. LA is really poppy, and everything is really cookie-cutter. I learned a lot from those sessions.

The last song, "Mortal Man," when Tupac is Kendrick is interviewing Tupac—all the jazz elements under that were recorded in a big jam session where everyone just jammed out for two hours straight. Then we cut it up and sent it over to Derek Ali for mixing.

I forget what the file size was, but it was straining on the computer for damn sure. Luckily, we were only using six or seven mics. We didn't have everything mic'd up, whereas when we were recording the strings we were using twenty-something mics at a time: four room mics, two overheads—every string had its own mic.

We ran into a few crashes, but as far as the jazz jam session, everyone just sat back and vibed out. That track in particular started with a few ideas and then went where jazz jam sessions go.

What are your thoughts on using live instrumentation vs. synths or VSTs?

If your workflow and budget allow for live instrumentation, do it every time. The little swings and nuances and velocity changes make music sound more real. You can get lost in live instrumentation. You can close your eyes and just escape. When you program everything, it sounds like sound more than music. It’s still aesthetically pleasing, but you can’t imagine the drummer in the corner or the bassist in the iso-booth.

What advice do you have for people who want to make a career out of mixing?

Today it’s a little easier to get by without going to school for mixing or music production. The main purpose of going to school used to be to land an internship at a big studio. A lot of big studios didn’t even look at your resume unless you went to school. They wanted to know that you’re educated in the basics, workflow, and studio etiquette. Those are things you can’t learn unless you have that knowledge passed down to you. Everything else, though…I obtained ninety percent of my skills outside of school through practice.

You have to work like someone’s chasing you, because there are a million other people trying to make it. That one weekend you take off, that one day you take off…get working! Practice is everything when it comes to music because there’s no perfect. There’s nobody in the world that believes their music perfect. It’s subjective, so you always have to work toward a goal and change your sound with the times and adjust, recreate, and reinvent, or you’ll miss a step. That one step is all it takes to miss out on an opportunity; it’s the difference between someone else getting a gig or you getting it.

There could be three engineers that mix the same song, and that song could win a GRAMMY. Or that album could win Best Album of the Year. Your one mishap or lack of practice or whatever could have just cost you a chance of a lifetime. You can’t be scared. Be prepared, hustle, and give it everything.

The resources today are unlimited, so there’s no excuse.

Anything else you’d like to add about mixing or making a career in music?

Just that I’m still figuring it out. You never really fully understand this beast. You have to be hungry for knowledge, know what you want to be, and know the goals you want to reach.

It’s also helpful to have a mentor to go to for advice in your field. I have a couple. I’ve met a lot of engineers along the way and learned most of what I know from them—sitting in the back of the room, watching what hotkeys their pressing, and occasionally asking what they’re doing. Then practicing their techniques on my own time. Fabian Marasciullo is someone I go to for advice here and there, asking him stuff like how he got a kick so thumping on one track, or how he got his stereo image so wide on another.

Even if he or she isn’t the best mix engineer, as long as you can learn something, it’s worth it.

Sometimes it’s hard to stay motivated. Looking back, there were a lot of times I was gung-ho about something, and then suddenly not so sure. I had invested everything in my life into music, dedicated everything to it, and it started looking grim. I had thoughts of giving up in my mid-twenties.

But here’s the thing. If you have a passion in anything, and you work hard trying to make that passion into your career, there’s no way you can fail. You can be forty-five and still chasing that passion and you wouldn’t have failed.