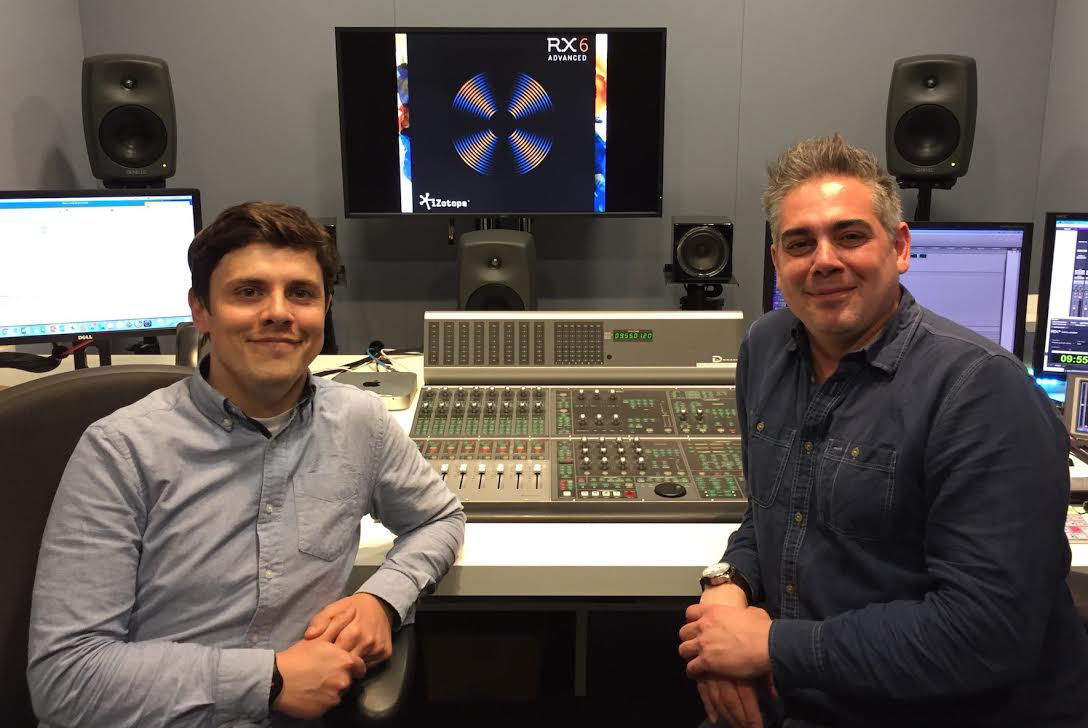 Discovery Networks International, headquartered in London, is a mission-driven company with a goal to satisfy curiosity with programs that inform, entertain and inspire. Its footprint covers more than 220 countries and territories and three billion cumulative viewers worldwide.

It all started with Discovery Channel in the US in 1985. Now, the broadcaster has 14 channels in the UK alone, led by flagship pay TV brands Eurosport, TLC, Investigation Discovery and Animal Planet, and free-to-air channels Quest and Quest Red—that together reach 25 million viewers every month.

Discovery’s UK portfolio of channels offer viewers a rich and broad variety of original television programs produced locally in the UK, as well as programs from the United States, Canada, and mainland Europe that have been repackaged and customized for a UK audience.

In the spotlight for this Innovation Award is the Discovery UK-based Audio Post Production Team, who work tirelessly to provide a superior listening experience for the channel’s viewers.  But first, some background on sound.

In the mind of the average consumer of media, the sound of a television show is believed to be second priority after picture—quite literally, sound is “out of sight, out of mind.” However, this perception couldn’t be further from the truth: high quality sound is critical to the enjoyment of a piece of creative media. In fact, studies show that poor quality audio is much more distracting to a viewer than poor quality visuals. Subconsciously, viewers take their cue from the sound. If the sound is subpar, the immersive effect of the narrative is immediately compromised and the overall quality of the program is perceived to be quite low. Lack of awareness of this impact is the first battle that sound faces.

The second battle is time. In the world of rapid-fire TV production, sound continues to be the “ginger-haired stepchild”—more an afterthought than a priority. Broadcast deadlines are already extremely tight, and the Audio Post Production Team is the end of the line after the bulk of production time is spent on capturing footage, editing scenes, and visual post. After all that work is complete, the audio post team then must work miracles to bring the original “production sound” captured on set to broadcast-ready standards.

Even with the best sound engineers on the job at the time of capture, production sound has inevitable problems due to location sound issues (street noise, equipment hum, gusting wind, and more) and common dialogue flaws (mouth clicks, noisy breaths, boomy reverb, etc.). Sometimes a show can make time for ADR (automated dialogue replacement: dubbing in alternate takes that were recorded in a studio), but this option isn’t feasible for many shows. For example, on a reality show like Deadliest Catch, the crab fishermen are not in a position to re-record lines aboard their ship! And even ADR poses its own challenges: additional time, additional cost, and additional work in post, as these new takes must be inserted seamlessly despite having a different sound quality than the original dialogue. Even worse, sometimes those re-recorded lines don’t have the same emotional delivery as the actor’s original performance, which affects the overall quality of the show.

“We used RX on every bit of voiceover, and modules like De-noise, De-click, and Ambience Match have saved us hours.”

When it’s time for audio post production, all these flawed assets are delivered to an audio team who may only have hours to perfect the sound and enhance the impact of the show. For many years, these precious few hours were filled with painstaking, tedious tasks to fix problems manually. This severely limited the time that could be spent on more creative expressions of sound, including artfully weaving in soundtracks and designing sound effects to intensify the narrative.

“Painful, it was painful!” explains Rik Elliott, Supervising Sound Mixer. “Removing hundreds of clicks, for example: having to zoom into the audio files, find the problem, and manually re-draw the waveform...everything was a time-consuming nightmare.”

“You get ‘X’ amount of time to do a job,” adds Andy Morgan-Davies, Sound Designer and Audio Mixer. “In the past, we used to have to go through all the files and apply noise gates and creatively use equalizers to try to fix problems. Nowadays, we can address those problems quickly and instead use our time to focus on the more compelling aspects of sound—the overall mix, weird and wonderful sound design, and creative experimentation.”

So what has changed to give sound a fighting chance in its battles? Enter iZotope. With 16 years of experience developing intelligent audio software, iZotope constantly collaborates with audio post production professionals to understand the unique challenges they face in their daily work. RX, iZotope’s industry standard audio repair and editing solution, has continuously evolved to solve problems that were previously impossible to solve. Tools within RX address thorny audio problems with just a few clicks, with an accuracy and a quality that causes many users to proclaim it as magic.

A sampling of features include De-noise, which removes those pesky location sounds; De-click, which makes instant work of removing clicks and crackles; De-plosive, which tackles mouth pops in dialogue; De-reverb, which removes unwanted echoes; and Ambience Match, which can quickly make two disparate audio clips sound as if they are from the same time and place. In addition to focused tools like these, RX also introduced a visual way of editing audio using a spectrogram, which makes detective work into audio problems a breeze: you can actually see it with your own eyes, and paint problems away as if you were using an image editor.

For the team at Discovery in the UK, these tools were essential for projects like the series Martin Kemp’s Detective, which aired on the free-to-air channel Quest Red.

“We used RX on every bit of voiceover, and modules like De-noise, De-click, and Ambience Match have saved us hours.” says Elliott. “For one example, for scenes where Martin is speaking to camera, occasionally his breaths would be too loud. We’d bring down his breath level, but those edits would lower the ambience level too, which caused gaps in the ambient background noise. Now that iZotope has provided Ambience Match, it’s not an issue...it’s easy to add ambiences where we need them to keep the entire voiceover smooth and natural.”

The four short video clips below provide a behind-the-scenes glimpse into the audio post production process. Watch them one by one to witness how much care goes into every audio clip of a Discovery UK program. For an optimal listening experience, wear headphones.

In this clip above, you’ll hear the original dialogue recording from Martin Kemp’s Detective. Listen and you’ll hear the inevitable “click” sounds of the mouth and tongue during a spoken voiceover. Also notice the loudness of his intakes of breath, which distract from the flow of his narrative.

In this clip from Martin Kemp’s Detective, you’ll hear how the audio post team at Discovery UK has used iZotope’s RX to reduce the clicky mouth sounds of Martin’s dialogue and smooth out the performance. You’ll also hear significant reduction in his breaths—they’re still natural, but no longer overpowering. Lastly, you’ll notice the resulting gaps in background ambience from where the breath was reduced.

In this clip, the audio post team at Discovery UK has used RX’s Ambience Match tool to seamlessly fill the gaps where the loud breaths once were. A viewer no longer will focus on the extra rasping of air, and the new result sounds so realistic that a viewer would never suspect that this is not the original version of the dialogue recording.

In this clip from Martin Kemp’s Detective, you hear the final result of the Discovery UK audio team’s work. Thanks to the intelligent tools on which they’ve come to depend, they’ve quickly been able to address typical problems that plague even the most straightforward dialogue recordings. This has freed the team to spend more time perfecting the mix of the ominous soundtrack and balancing it carefully with Martin’s narrative. Compare it against the first file to hear how far we’ve come!

“And it’s not just fast, but it works! We can’t afford for our tools to not work, and the team at iZotope helps us get the job done beautifully.”

“RX also helps the entire production team make more creative decisions for the series,” Morgan-Davis continues. “For example, for one scene, the team really wanted to film Martin in an echoey car park, but there was concern over dialogue intelligibility. Rik and I knew this was something RX could tackle, so we had them shoot a proof of concept and fixed it up without a problem. Thanks to RX, everyone could follow their creative vision with confidence, without compromising sound quality.”

“What’s wonderful is that everything about RX makes the process fast...that’s the biggest compliment I can give.” reflects Elliot. “You’re not spending your limited time just trying to get to something that sounds good...you can get to that point very quickly, without the hassles we used to face. What’s invaluable is that you can then carve out time to be creative with the material, rather than be mired down in the dull, legwork tasks.”

“And it’s not just fast, but it works!” emphasizes Morgan-Davies. “We can’t afford for our tools to not work, and the team at iZotope helps us get the job done beautifully.”

Another pervasive problem in audio post has been the rustling caused by lavalier microphones. This noisy distraction can be the bane of any audio post team’s existence for talk shows.

“De-rustle is a game-changer,” says Morgan-Davis. “Lav mic rustle has plagued audio post pros for decades, and there was no hope for it to ever being solved. We’re so pleased iZotope has listened to our needs and dedicated their R&D time to working on a De-rustle algorithm.”

“On average, we’re using iZotope tools over 80 hours a week, which is saving us what would be months of work otherwise” continues Elliott. “There’s no one else making audio solutions of this quality out there, which means our team can quickly deliver the best quality possible for Discovery UK for each and every show.”

Elliott concludes, “There isn’t a single job we haven’t used it on…we simply can’t live without it.”