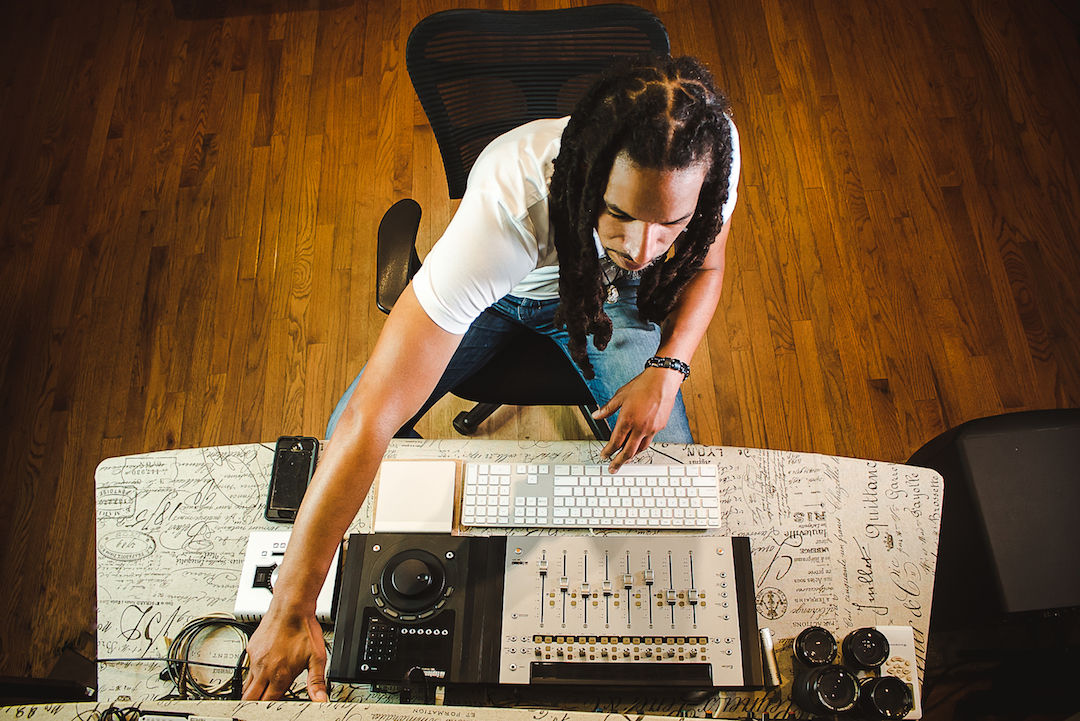 You may be familiar with Amond "AJ" Jackson. Last August we ran a story about how he used RX and Ozone on "Triple Platinum" by Rick Ross. Or you may be more familiar with his impressive and growing catalogue of work. Just within 2017–2018, his credits include working with artists like Future, Young Thug, Rick Ross, Cee Lo, Pierre Bourne, 808 Mafia, Talib Kweli, and many others.

We caught up with the owner of Salem Psalms Studios in Atlanta, Georgia to talk about mixing Tee Grizzley’s track ““Robbin” off his new album Activated, which recently debuted on Billboard at #10. Below is Jackson’s take.

“I had the great pleasure of mixing “Robbin,” a track produced by my brothers; Flaw The God, The Olympiks, and Smitti Boi. The Olympiks and I have been doing quite a lot together lately and as we both have heavy roots in Detroit, it’s great to be collaborating with Detroit’s own Tee Grizzley and Affluent Management Team. Between them, Helluva, and Chop Squad, they’re really putting it down for Michigan right now. It’s also dope that “Robbin” isn’t your average Grizzley record. He really stepped outside of his comfort zone and added something special to his catalog with this joint.

“When I stepped back and noticed just how many instances of iZotope products were in the session, I was like...” yeah, I should call Dave at iZotope.” Dave Godowsky was the one that introduced me to Neutron 2 Advanced, and now my staff and I use it religiously. I wanted to offer some insight as to how I and Rob Thomas used the iZotope suite in the song’s mix. Glad Dave didn’t ream me for using iZotope’s old-school reverb. I just can’t shake it. Lol.

“One of the most challenging things to teach people about mixing is the relationship between sounds and their respective harmonics. Every individual harmonic affects the rest of the harmonics in any composition, be it film or music. After a session is prepped, 70% of my time is spent EQing . That's why I'm super picky about EQs.

“Currently, my favorite is the iZotope Neutron 2 Advanced EQ. It’s extremely powerful because of its flexibility and speed in implementing ideas. In fact, I used 41 instances of the Neutron EQ in this mix. I have a hard time imagining mixing without it. I’ve yet to see another EQ that can communicate with all the other EQs in a session. Neutron 2 Advanced has made more impact on my work as an audio engineer than any software I’ve touched, to date.”

Knowing when enough is enough

“From the offset of the mix, the elephant in the room was clearly the recording of the cell phone, which kicks off the record. That’s not a filter, it’s a real phone call. In the original mix session, Grizzley can be heard ending the conversation by saying ‘I’m gonna call you as soon as I leave here.’”

“I loved it. Some people give the ‘Now’ generation a hard time for their supposed “lack of creativity,” but to me, that's trash. Grizzley using a real phone call feels no different to me than the things we used to hear during the Wu Tang era. We didn’t observe any rules. We just made music we liked. It’s lowkey one of my favorite things about the song.

“The call added an abrasive texture and an authenticity that made the song feel even more personal. My goal wasn’t to clean the recording up, but instead to make the words more clear and discernable for the fans. I used the Neutron 2 EQ to fine-tune his voice and reduce the external noise in the recording. Beforehand, there were things like, music playing in the background from what sounded like a car in the recording. In most songs, I would have simply removed everything other than the actual human voice using iZotope RX, but each song is its own universe and this element of the song needed to remain as close to raw as possible.

“As an engineer, you have to stay mindful that you can clean a record too much. When you’re new to engineering, or at a place in your career where you’re trying to prove yourself, you’ll often do too much “cleaning’ instead of focusing on “clarity.” I’m a giant overly-technical audio nerd so it may seem contradictory, but I don’t place any value on how clean something is. Clean is often boring and impersonal. Clarity, however, is king.

“Once you get to a place where no longer need to, or feel the need to prove yourself, you start to let go of the idea of perfection and truly begin to appreciate the things you used to see as flaws. Those ‘flaws’ in a song are what make them feel truly human. You start to weigh things like noise as a ‘does it add value to the record,’ or ‘does it not’ type of thing. Hendrix and Michael Jackson records, for example, would have been robbed of all their life if there was no “noise.” It is about focusing the noise that's good for the song and reducing or removing what isn’t. The emotional content of a song is literally 100% of its value to people who consume music. The way a song makes people feel is the only reason they’ll listen to it even with no one else around.”

“I do a lot of focussing the low-end elements of a record. Focusing the sounds in a mix is my thing. People think I’m crazy until they hear the difference it makes. There are several bottom end elements in ‘Robbin.’ There's a bass, an 808, a kick, and some deep chords. Not to mention all the dark reverbs throughout the record.

“Keeping them out of one another’s way without disrupting the vibe of the song can be challenging. Fortunately, Flaw the God and The Olympiks are great at selecting the right sounds. When there are this many potentially clashing elements of a song, I typically dial up the masking feature.

“Neutron 2’s Masking Meter is unreal. It behaves like a living organism across your production or mix. All of the instances can see and respond to one another, highlighting potential problem areas and interacting with one another seamlessly. It visually lets me know if there is a build-up of frequencies between elements of a song. A build-up of frequencies doesn't necessarily mean that it's is a bad thing, but it is tremendously helpful in calling my attention to those specific areas and measuring just how much they are doing it very quickly. I find it particularly useful in the low end, where the human ear isn’t quite as effective.

“The synth bass they used was bananas. I focused it by contouring 500 Hz, which concentrated the bassline a lot, making room for some of the punch in the kick and the body of the 808. Once those sounds started playing nice together, I was able to tell how much of the bottom end in the keys to let go of without losing the body of the song. One of the things I find interesting about the way the brain perceives sound, is how when you focus a sound it can feel louder and more present even if it isn’t mathematically louder. So in that one EQ move, the bass, the kick, and the 808 felt louder, and the chords had a new space to live.”

“The Olympiks used keys with the type of panning effect you’d hear on a Rhodes. Being that it’s the dominant sound of the instrumentation, I cut part of the low end and reduced other frequencies. I reduced some of the force in the 1K range and again in the general 2-3K range, so it would allow some room for Grizzley’s vocals to sit in the melody a bit. Then added some high-end harmonics which kept it present in the mix rather than sitting underneath other elements of the song.

“This sort of careful attention to a sound like this is critical. If I just cut the low end, the record would've lost it’s warmth. But if you don’t reduce some of it, the systh bass and 808 wouldn’t breathe. All the panning in the chords grabs the attention of the brain so balancing this sound out with the rest of the song was super critical.

“Lastly, during the moments where there was less instrumentation in the beat, the chords had more room to be full. I took advantage of that by duplicating the chord track and splitting the regions. For the parts when there were a lot of sounds happening simultaneously, I cut the low end about 150 Hz. When there was more room for the chords to breathe, I added more bottom end and cut them at about 90 Hz. You wouldn’t notice by listening to the track but you’d definitely notice if I didn't.”

“The percussive elements like the hats were meant to be very present, so I used Neutron 2’s Dynamic Mode in the 10k area of the primary hat to cause them to feel more alive and add more movement to the song. This plug-in makes it so fast to play with those sorts of ideas that I implement them way more often now. Since you can sidechain any node in the EQ without having to open another plug-in, it prevents you from having to create new busses, or isolate frequencies to key the compressors or expanders.

“After EQing, I added Ozone 8 Imager and used the “Spacious High End” preset. Following that up with another Neutron 2 EQ to fine tune some of the harmonics. It caused the sound to be subtly present and add a great underlying texture to the song.”

“It’s not uncommon for me to mix separate records for artists like Future and Young Thug, Raheem DeVaughn, and Talib Kweli in the same week (which actually happened recently). Tonal Balance Control helped me to make sure those mixes made sense for their respective genres. There are no concrete rules in music, but I like to know how the tonal balances of the song I mixed compare to other charting songs in that genre. It helps me to know how far left my mix is or isn’t. I’m good for challenging the status quo of mixes so at least I know just how much I’m doing so.

“With Tee Grizzley’s ‘Robbin’ I used the Heavy Bass preset and the Modern preset to get a feel for how the rest of the world would perceive it. I wanted to preserve the dynamics of the song to keep it emotional since the subject of the song was something very personal that anyone with ambition can relate to. The whole “where were you when I was sleeping on the floor? How can you come around now and act like I owe you the ability to celebrate my overcoming those hardships all the sudden” type of song.

“What I can tell you is this. There is no one correct tool or approach to making a work of art. It’s art. However, there are major differences in the tools one can leverage to get there, and how convenient they are to use. iZotope’s Neutron 2 Advanced is something which maximizes my speed and accuracy in mixing classic records.”