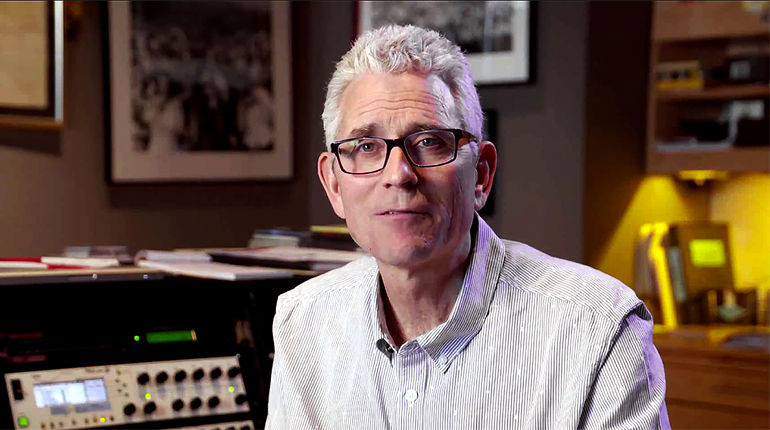 Senior mastering engineer Greg Calbi talks about the music legends he’s worked with and the method he has used to optimize sound quality on more than 7,500 albums since 1973.

When Greg Calbi was growing up in New York City in the 1950s and 1960s, the prolific senior mastering engineer had no previous experience in recording. He loved music (he was a serious jazz guitarist in his teenage years), though, and there was always something musical going on in the City that Never Sleeps.

Greg was fortunate to be in the right place at the right time to see some epic concerts. The Beatles at Forest Hills Music Festival in 1964, for one, and Andrés Segovia at Town Hall. But it wasn’t until he attended a party one night shortly after completing grad school that fate stepped in and determined his career path.

“There was a guy there,” Greg says. “He worked at Record Plant studios. He was dating my friend’s sister, and it just blew my mind that he worked in a recording studio.” This encounter stirred up memories of the great shows Greg had seen. He was selling women’s shoes in Queens at the time, and asked if the studio needed any help. The life-changing call came a month later. Greg was asked to drive a truck to the Yes “Close to the Edge” concert.

“I found myself literally in one week from being not in the recording business to being on stage right next to Rick Wakeman during a Yes concert at Duke University,” he says. “It was like ‘How did this all happen?’ I literally knew nothing about recording—didn’t know what a patch cord was. I really started completely from scratch.”

Driving that truck to the Yes concert was just the beginning of a career that transitioned from stage to studio—one that has thrived for more than four decades. Record Plant asked Greg to help out in the studio. Imagine stepping off the subway and walking into the recording studio for the first time just as John Lennon and Yoko Ono were walking out. “You talk about inspiration,” Greg says. “The whole thing was kind of like ‘Where am I? What am I?’ But I didn’t know anything.”

Saying that the learning atmosphere at Record Plant was informal is a bit of an understatement. Greg had to learn on the fly. “There was no program where they taught the new hires. They threw you in a room. If they liked you, they showed you what they wanted to show you, and what they didn’t want to show you, you had to learn on your own.”

And learn he did, by interacting with legendary engineers like Jack Douglas (John Lennon, Aerosmith), Jay Messina, Shelly Yakus, and Roy Cicala. “It was mind boggling,” he remembers. There was also no shortage of cutting-edge performers like Lou Reed, Aerosmith, and Kiss walking around all of the time.

Greg worked in the cutting room, even though he had very little experience. “I was the guy that did the transfer,” he explains, “and that’s kind of how I learned about how mixers and recording engineers dealt with their work.”

John Lennon was a client of the studio, and with his sizeable budget he could make lots of recordings. “When you worked at Record Plant, John was one of the guys who worked at the studio, so you saw him all the time.”

“When you wanted to do a remix, it wasn’t just going into ProTools and making the vocal louder,” Greg says. “[Lennon] would be in the room for a whole day or two days, but every time he needed to listen to a mix at home, you had to cut an acetate of that mix.”

Lennon wasn’t geared in so much to the mastering differences, but when he went home he would listen to the mix. It had to be just right and the transfer had to be done properly. Mastering was rudimentary in those days, the 1970s, compared to the way it is now, but the engineers were very precise. “The reason that they really liked what I did was that I was able to maintain the integrity of their mix onto the acetate.”

Working with artists such as John Lennon gave Greg firsthand experience at one of the more difficult but essential skills of a mastering engineer: taking an artist’s creative vision and figuring out how to execute it technically in the mastering studio.

Greg Calbi has been mastering records at Sterling Sound in New York’s Chelsea Market since 1973, cutting vinyl for John Lennon’s Walls and Bridges, Bruce Springsteen’s Born to Run, and David Bowie’s Young Americans. He further honed his skills mastering albums for The Ramones, Television, The Talking Heads, Patti Smith, and Paul Simon on his GRAMMY Award-winningGraceland.

In the 1980s, Greg began adding other music genres to his repertoire, including jazz and world music. More recently, he mastered Sara Bareilles’ The Blessed Unrest, The Beatles’ The U.S. Albums [Boxset], and Lady Gaga and Tony Bennett’s Cheek to Cheek.

Along the way, Greg developed a philosophy he still believes in today: taking the sonic vision the recording artist has and enhancing it to the point where they feel it perfectly represents what they initially imagined it would be. He translates that vision into the best sound it can be, whether it’s meant to be plush and pillowy or harsh and bright.

“My philosophy is really one of respect for the creative work, and to try to capture the vision of what the person intended to do.”

“When I got into the business and saw what was happening, I didn’t really want to be an engineer,” he reveals. “I wanted to be a producer.” He believes the building block of every project is the concept of the song, its lyrics and the performance. Everything enhances that, and the mastering is the last enhancement process.

Mastering, then and now

When Greg started in the recording industry, “guys would book a room, do an album, mix the album. The album would be done, and the studio would be on to another project.” The producer would listen to the album and realize that maybe the vocals were too low. In the early days, there was no recall of settings, so when errors or mistakes happened, it was back to the beginning.

The biggest change in the workflow has to do with the transition from analog to digital, and from recording studio with outboard analog equipment to the interim stage of a studio with some digital equipment, and finally to the current state of digital mastering. When recalls became easier to do than having to rebook a studio and reset it up, they saved time, resulting in less technical mastering. It’s the recall ability of mixes that has changed mastering. A new mix can come in electronically and save the day in 15 minutes.

Ozone—more than a dose of fresh air

Something else has saved the day for Greg more than once. “If you find some bit of electronics which enhances your signal, and you know what it sounds like, then you use it,” he says. Ozone has given him the opportunity to get more dynamic competitive mastering, something that has made his life easier in terms of satisfying his clients.

“The beauty of the Ozone plug-ins is that I have the ability to compete in ways where I don’t have to sacrifice the dynamics that I hear,” he says, “or at least have the ability to understand what dynamics are lost and what’s being gained in terms of loudness. That’s essentially what mastering is today.”

"The beauty of the Ozone plug-ins is that I have the ability to compete in ways where I don’t have to sacrifice the dynamics that I hear."

Greg has developed presets and swatches of compression that he uses as a starting point. “They’re like a window into where a mix can go as an intermediate stage to finishing a master.” Presets can pave the way, but the full journey varies depending on the material.

“I know when I’m done when I know that, no matter what I do in terms of mastering, I will not be able to make that mix work any better than it already does , that there’s no other tool that will actually make that a better listen.”

“You find your tools, and I’ve found some good tools recently with the Ozone set.”