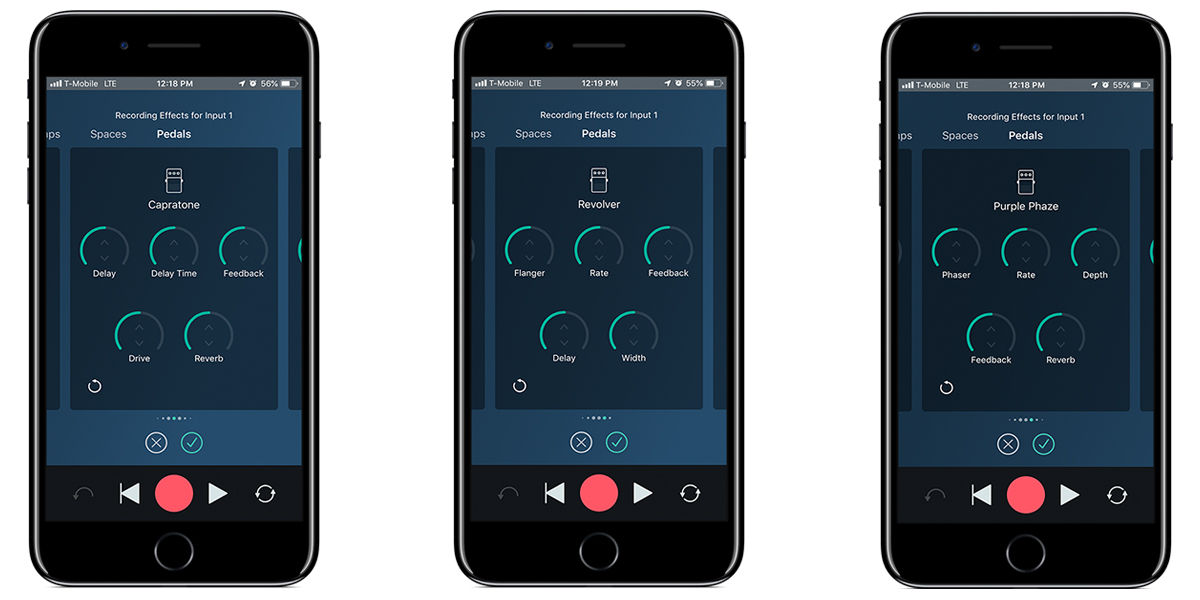 Download the latest version of the Spire app (iOS and Android), which includes all the latest effects.

One of the things I love most about Spire Studio is the free companion Spire app. An eight-track recorder that lets you capture, edit, and layer song ideas, it’s like having your own personal mixing engineer right at your fingertips. The app is free for everyone to enjoy (it's available for download in the Apple App Store, so if you don't have it yet, get your hands on it).

With the app, you can create, save, and access projects from anywhere, including a built-in metronome to help you stay in time while recording. Edit your recordings to remove unwanted audio and create seamless loops. Quickly mute and audition tracks to make the songwriting and rehearsal processes easier.

Mixing on the fly is made really easy with the Visual Mixer, so you can stay in the creative zone wherever you are. And to make things even better, you can instantly share a track or the entire session with a friend to collaborate on a work in progress.

But where the app really begins to shine, is when you pair it with Spire Studio. It's like having your own portable recording studio, ready for your great musical ideas wherever you are. Whether you're doing a "30 songs in 30 days" challenge in your home studio or something completely different, Spire Studio lets your record studio-quality audio with minimal effort. The built-in microphone auto-calibrates to your dynamics so that you're never too soft or too loud. So wherever inspiration strikes, you'll be ready to get those ideas down in no time. And do so at high quality.

One of the amazing things that happen when you pair the Spire app with your Spire Studio is that you suddenly are given access to a bunch of effects that can make your recordings sound spectacular. In this article, I'll go over all the effects that are included in the app and how you can use them.

Once you pair the two together you'll be able to control your Spire Studio from the app, visualize all your recorded audio, and so much more. The things we want to focus on are all the awesome recording effects that suddenly get unlocked for your use.

Adding an effect to a track is (like everything else in the Spire app) very easy:

1. Before you record, tap the Input Meter on your selected track in the Spire app

3. Swipe left or right to preview the various effects

4. Fine-tune your effect by adjusting the sliders and/or knobs

5. Once you're happy with your sound, tap the ✓ button to apply your effect

You’ll notice that the effects get unlocked when you pair your Spire app with Spire Studio. Let’s go over each one of these, and see how you can use them in your song recordings. 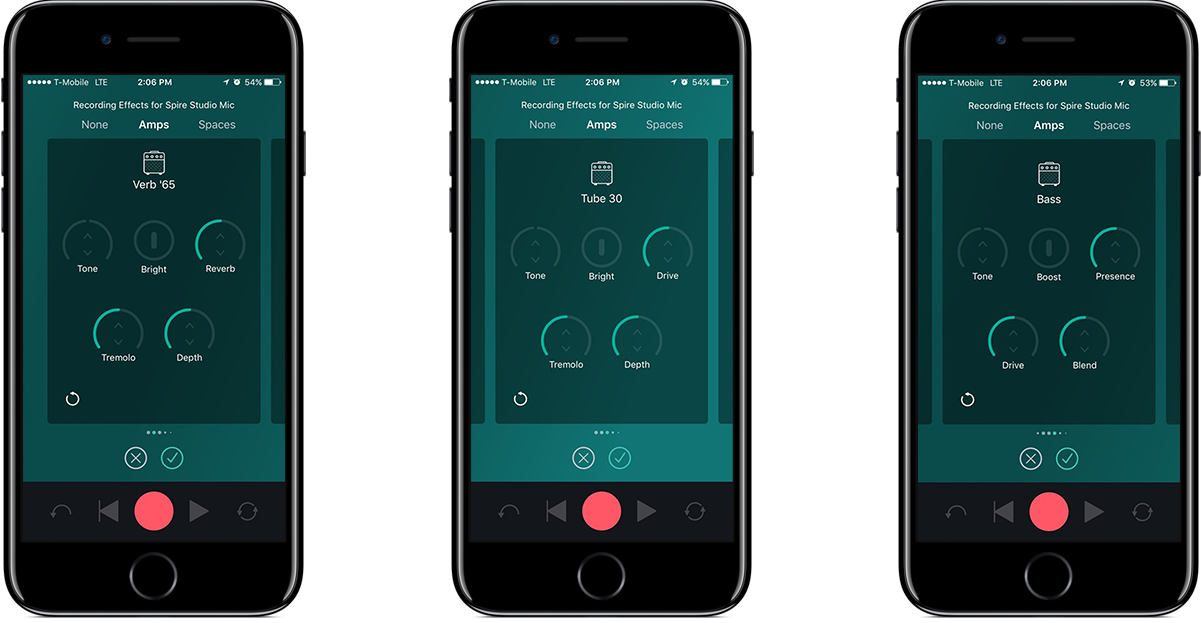 Guitar players will be thrilled to explore two different amp emulations for their electric guitars. The first, titled Verb '65 is emulates legendary 60s tones. It's such an iconic piece of history, all packed into the Spire app.

The second amp, the Tube 30 is a 30-watt tube guitar amp. Rather than adjusting reverb, this one lets you adjust drive. Drive (i.e. Overdrive) in tube amps literally overdrives the tubes to create a saturated distortion.

Both guitar amps allow you to adjust parameters like Tone, add more Brightness, Tremolo rate and it's Depth. There are dozens of ways to create some interesting sounds, so plug in your guitar, chose either of these effects and start playing with the different parameters to make the sound your own.

Bass players will rejoice as they haven't been left out. The app includes a great Bass amp for your use. You'll find similar controls to the previous two amps, including Tone, Boost, and Drive. But this one also has two additional settings: Presence & Blend. Presence is a controller found on so many bass amps, which essentially acts as an EQ boost for the high frequencies while ever-so-slightly cutting the mids. Blend on the other hand is a great way to bring clarity back into the mix by letting you balance your original "dry" signal with the processed "wet" drive signal.

The idea behind Spaces is to help you create the illusion of performing in different environments. From small and intimate ones to crazy large ones that sound borderline psychedelic. 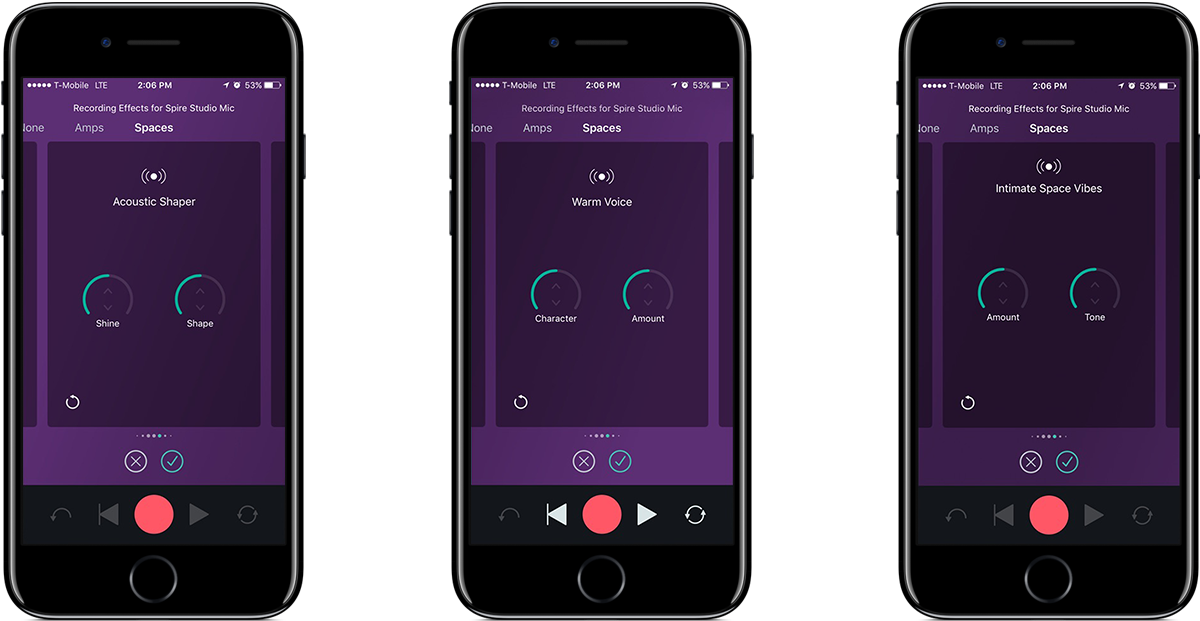 Acoustic Shaper is a great effect which will add a lot of shine and "sparkle" to your sound. It does so by applying a gorgeous bright-sounding reverb to your track. This one will work beautifully on vocals or slow-moving acoustic guitar parts.

The newest addition to the Spaces family is Warm Voice. If the Acoustic Shaper effect was too intense and the length of the reverb was too long for the song you’re working on, you’ll probably love Warm Voice. Think of it like the little brother to Acoustic Shaper. It adds a touch of reverb and basic polishing without ever getting overpowering. It’ll be your new companion to make your voice sound as good in the recording as it does in real life.

Intimate Space Vibes may become your newest best friend. It primarily acts as a delay effect (some people call this an echo) where your signal gets repeated a couple times. The repetitions synchronize to the project tempo that you specified, so it'll match perfectly, creating quarter-note echoes. To keep things simple, there are only two knobs on this effect: Amount (which, as the name suggests, controls the amount of the delayed signal) and Tone (which lets you tweak how the repeated signal sounds).

The final effect is Vintage Dub Echo. It's similar to the Intimate Space Vibes in that it's a delay based effect. But just like with Deep Space Vibes, it's altered to create a more interesting special effect. Rather than straight quarter-note repetitions, this one uses a quarter-note triplet echo pattern. This means it's busier and more active. Depending on the song, this may be exactly what you're looking for. And just like before, you get to control the amount of "wet" signal (Delay) and it's Tone.

The latest addition to the recording effects family is the “Pedals” section, which features brand new pedalboard effects to spice up your guitar tracks. 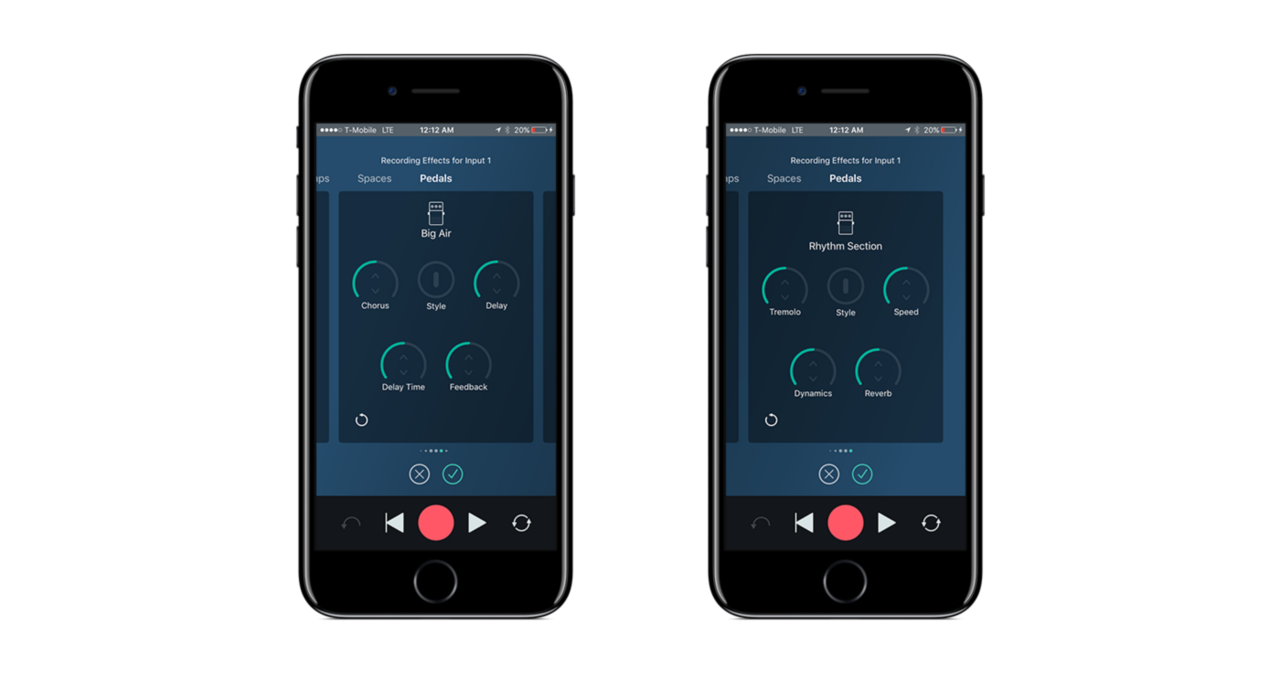 Big Air is a collection of pedal-style effects that will let you fatten up the sound and give it a little more motion. That's because this pedalboard setting uses a Chorus effect coupled with a Delay effect. You get to decide how much chorus is applied to your sound. Additionally, you have full control over each of the important control parameters for the delay, including the amount of delay, delay time (distance between each repetition) and feedback (meaning amount of repetitions).

Feeling adventurous? Enable that Style button and the effect will be taken up a notch to give your guitars that extra meow.

As of Spire 2.8.0, three new pedals have been added for your guitar recording pleasure, giving you ever more variety and sonic goodness.

Capratone is a beauty which features a combination of a subtle Delay, some sweet Overdrive and Reverb to make your guitar tracks sound super sweet without going overboard. As with all other recording effects, you can adjust all the individual parameters, including delay, delay time, feedback, drive amount and reverb amount.

If you’re striving for a more nostalgic trip, check out the Purple Phaze recording effect. It’ll definitely give you that Prince sound, and that’s due to the inclusion of a Phaser and some Reverb. If you want to learn more about what a phaser does, check out our article on understanding chorus, flangers, and phasers. You get to control all the basic setting, including phaser amount, its rate, depth and feedback. You also have a knob for controlling the amount of reverb. So you can shape and alter the sound to your exact liking.

The third addition to the 2.8.0 update has been the inclusion of the pedal effect titled Revolver. This one makes use of a subtle flanger and a ping-pong delay. Ping-pong delays bounce the sound between the left and right speaker, thus creating a neat three-dimensional effect. Like with the other pedal effects, you’ll find all the controls you would expect to let you dial in the sound you’re looking for, including a width setting for the delay.

The final effect is the Rhythm Section, which uses a combination of Tremolo and Reverb to bring your guitars to life. The tremolo effect acts like a gate which allows the sound of your guitar to pulse up and down. The amount, speed and dynamics of these pulses can be individually controlled using the knobs on the settings page. Additionally, you have control over the amount of Reverb applied to your guitars, so play around with the parameters to find your perfect sound.

Enabling the Style button will change the shape of the tremolo, softening the pulses, making them sound less like a Lady Gaga synth and more like something out of a Beatles song. So try it out and see how it works!

I hope that this overview of the effects that are included when you integrate the Spire app with Spire Studio will inspire you to make some truly magnificent sounding recordings. And although it's tempting to go crazy with the effects, as always, less is more, so use them like the spices in your kitchen cabinet. Figure out which ones taste the best together and use just enough of each to make them blend together into a delicious dish, or, in your case, a gorgeous song.

The great news is that the Spire app automatically updates with the latest effects, so with time, as more effects are added to the "Recording Effects" library, you'll be able to experiment with new sounds!