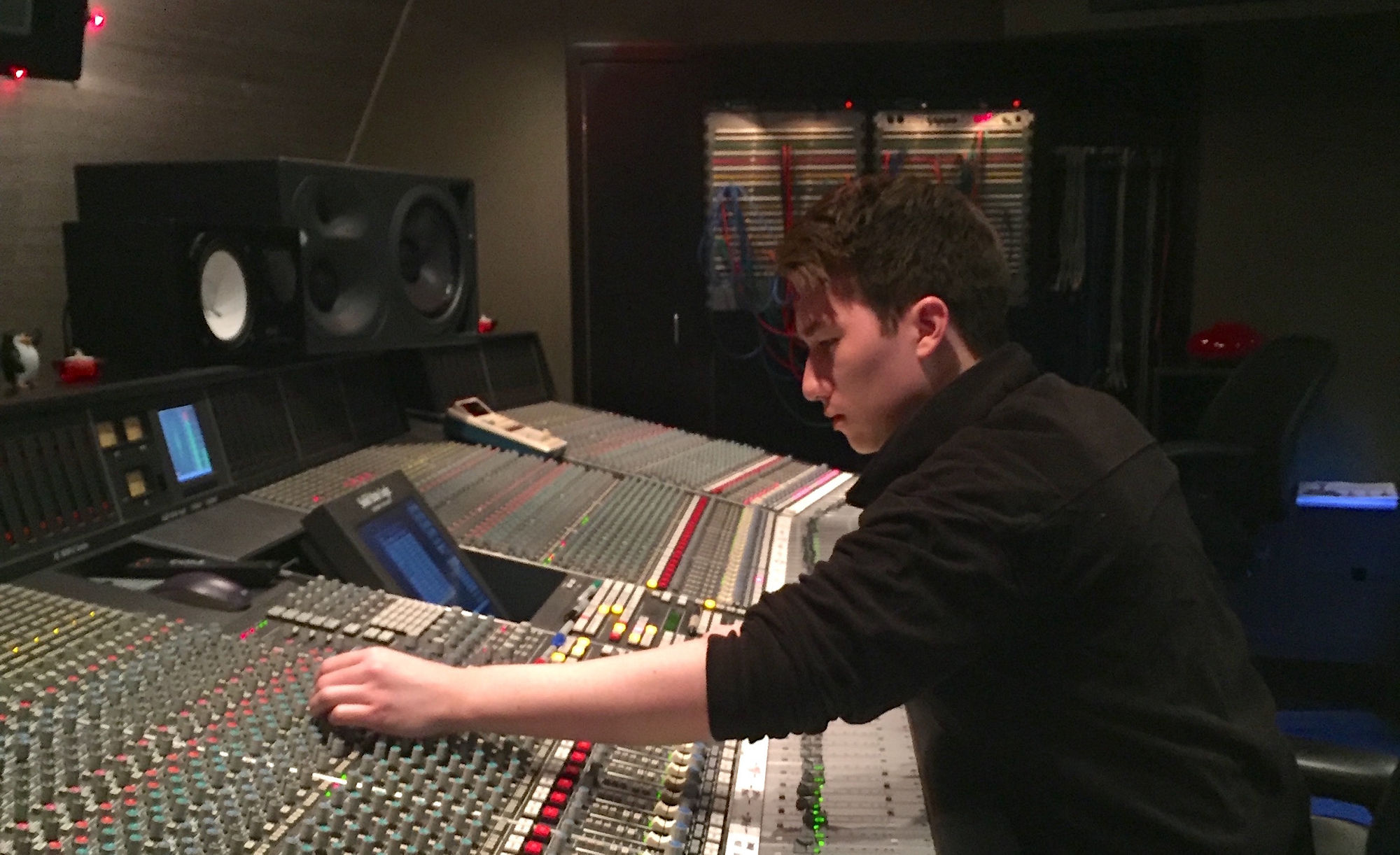 Neutron 3 Advanced has just dropped, and with it comes Mix Assistant—a tool that listens to your entire session and suggests a level balance for your mix. Since balancing tracks is an essential step in mixing music, we turned to a pro for his perspective.

I confess, however, that may have gotten more than I bargained for when I decided to contact Ike Schultz.

If you don’t know who he is, you will soon. He’s mixed singles such as “Phone” for Lizzo, as well as songs like “In My Foreign” (The Americanos, featuring Ty Dolla $ign, Lil Yachty, Nicky Jam & French Montana). He’s worked with super-producer Ricky Reed, and currently, he engineers for Tinashe—a remarkable pop-singer with songwriting chops to match. Before all this, he had a long stint in the assistant chair with Manny Marroquin, working on records for Adele, Kanye, Rihanna, and many others.

So why did I get more than I bargained for?

In addition to being doubly qualified for this article, he’s generous with his time and tips. A quickly-paced conversationalist with a wealth of knowledge, Schultz kept me on the phone for a two-hour conversation that flew right by.

What follows are eight tips for balancing your mix. Watch the video below on how Neutron's Mix Assistant makes it easy, and read on for Schultz’s perspective!

Before we began talking in earnest, Schultz stressed the importance of organization, saying his first moves revolve around “preparing your session in advance.” That way, “by the time you approach the song, the only thing that you're focusing on is the song—and not the idiosyncrasies of your session.”

As we’ll see in subsequent tip, the session prep serves the level balances, for there can be no proper leveling without session prep. It also underscores a core philosophy.

“When I approach a song,” says Schultz, “I'm trying to get the things between the song and your ears to be as little as possible.”

This means preserving workflow at all costs.

“Every single mouse click and every single menu is taking you farther and farther away from the point of mixing—which is the song. And so it is required to take out as many of those steps as possible.”

To that end, Schultz makes judicious use of templates, taking care of all the variables he can. This includes routing auxes and color-coordinating tracks so he can pick them out by sight.

If he takes attends to this left-brain work early on, he can devote his full attention towards the mix itself, so that “no part of my left brain needs to be involved to navigate the session.”

2. Use the initial level balancing process to ensure you have all the assets

Schultz plays in the major label world, where a rough mix has been approved by many people before it reaches the mixer. With this in mind, Schultz puts up the faders with one primary goal:

“One of the first steps that I follow,” Schultz says, “is A/B between the reference and the parts that I have. The reason for this is that there can be discrepancies there, even besides the static mix level.”

By “discrepancies,” he means missing parts—or new parts that didn’t appear in the rough. On projects with multiple producers, this isn’t exactly uncommon, as many versions of the session exist.

If he finds a discrepancy—say, an extra tamborine—that might necessitate some communication, he’ll reach out to clarify that with someone.

Indeed, sometimes this leads to an entirely different rough from the producer, one that “sounds totally different. Maybe it has an Ozone preset on it that I wasn't listening to before, which is very important, because all the people who approved the song were listening to that version.”

It may seem divorced from the process of level balancing, but it’s not—he’s achieving an ancillary, yet important goal through pushing up the faders: if he hadn’t done this essential task, he wouldn’t have all the information necessary to make the best possible mix.

Once Schultz ensures all his assets are exactly right, he can proceed to the next step.

3. Set up the static mix to match the rough

Now the process of balancing the mix serves a whole new purpose—to match the rough mix provided by the producer.

“By the time I get these parts,” Schultz says, “that rough is the thing that made the entire label want to spend enough money to put the song out and have a mixer mix it. So they already like it.”

The way Schultz sees it, it’s his job to improve upon the tune they love, not to foist his ego upon it. “There is a certain initial feeling that [everyone] has collaborated to create. They're taking a photograph of a mood essentially. And it is your job to Photoshop that photograph.”

His aim becomes clear in this regard: By the time all his faders are at zero, it should sound like the rough mix.

“That's the way that my static mix is set up,” says Schultz. “If I were to A/B the rough mix—if I had all of the faders at zero without instantiating any EQ or effects—it should sound almost the same, except that the new mix is running through the desk, which probably makes it sound ever-so-slightly nicer.”

If you read that carefully, you’ll note he’s not just setting up levels to match the rough mix—he’s setting up the faders so that zero, the default position of the fader in many DAWs, matches the rough mix. Not only does this provide the correct starting point, but it also leaves a decent amount of headroom at his disposal, which we’ll cover in just a bit.

4. Think about matching versus mixing

Usually, it’s advisable to leave out EQ, compression, and other processors when setting up a static mix. But sometimes the pros break the rules.

In an ideal world, Schultz wouldn’t have to do much to match the rough—the session he’d get would match the rough from the label. But the world is not ideal. Files get lost in translation, or can be bounced down from different DAWs.

“That's where the idea of what some people call matching comes into play,” says Schultz. “Matching is getting it to the point where a session sounds exactly the same—or very, very, very close to the rough mix.”

He uses his ears for this.

“Eventually you catch things—your ear can hear things like, ‘Oh that's clearly a short D-Verb.’ So if I want to match this, and I have a dry stem right now, I put a D-Verb on, and this is where they started. I'm not necessarily going to use that D-Verb by the time I get to the end of it, but that is the point they were already at.”

It takes time, practice, and a bit of guidance to train your ears to this level. Luckily, iZotope makes tools that can help you match timbres, especially when it comes to EQ. Using EQ Match in Ozone, you can see exactly how one bit of audio might match up with another by studying the corrective curve.

5. Focus on the balance between elements

When the rough is matched, Schultz hones in on the relationships between individual instruments.

However, the preparation laid out in previous steps is key.

“If I put the kick and snare at zero, I know that that kick and snare, relationship-wise, are at the same level to each other as they are to the reference. And then from there I can make a decision like, let me add 50 Hz on the kick drum.”

This helps all subsequent decisions:

“I know that because I boosted that amount, maybe I need to turn the kick drum down a little bit, so that the relative relationship between the low end and the top end of that kick can even up.”

6. Pay attention to the interplay between kick, snare, bass, and vocals.

Indeed, Schultz placed a special emphasis on this instrumental combination.

All of this preproduction and careful matching is still in the service of instinctual mixing choices.

It's not like I'm sitting down and thinking, let me add 400 Hz to this because it’s the harmonic—‘that will make this sound sonically more pleasing!’ said no one ever when they were mixing! You just feel it out.”

At this point in the process, all the left-brain stuff has been accomplished, so “it's very much an intuition thing. I pull up the kick, and as soon as it's in the spot that I know feels good, I just let go of the fader and I move on. And your first decision is almost always your best decision.”

Because this process is so instinctual, “the first hour of the mix is the most important for sure. No question about it. That's when I'm bringing up the majority of the instruments and putting them where I feel is correct.”

Now we circle back to topic of headroom. You’ll recall Schultz talked about the important of faders at zero equaling the rough, which gives you room to move around. But digital headroom is also on Schultz’s mind:

“Something interesting about plug-ins is that they sound better with headroom,” says Schultz. “Take a compressor, and just run a two-track through it a certain setting. Then just take a trim plug-in and just do -6 dB before the compressor, and +6 dB after it. And then dial in your threshold so that it's a similar amount of gain reduction [to what it was before]. You'd be amazed at how different that sounds. It is so much better—plug-ins just sound better with headroom.”

Some of these concepts, such as using the rough mix as the jumping off point for balance, might seem a bit different from what you’d expect. Consider, however, that the times are changing.

“The mixing role has changed a little bit, as technology has moved forward and workflows have changed.” One side effect of this change? “The producer is much more of a finisher of the record than they used to be in some senses, just because of what they have available.”

This is different from the old days, when “mixers were maybe doing things that were a little more drastic or creative,” says Schultz. “But nowadays the production is very locked in, and your role is really to try to bring out the best elements of the production so that it feels better. It's kind of a different art form. The lines that you're working with, and the alterations you're making, are more micro than macro.”

That being said, “the mixer is also the person who has a fresh perspective on it. So you’re bringing in the whole picture of the song.”

Yes folks, as we’ve said so many times before, it’s all about the song. From the organizational aspects to fine-tuning the level balance, you must serve that one master.

“You're really just trying to like enhance the song,” says Schultz. “You're just trying to make the song as best as it can be with your tasteful decisions—and that matters a lot more than your ego, you know?”