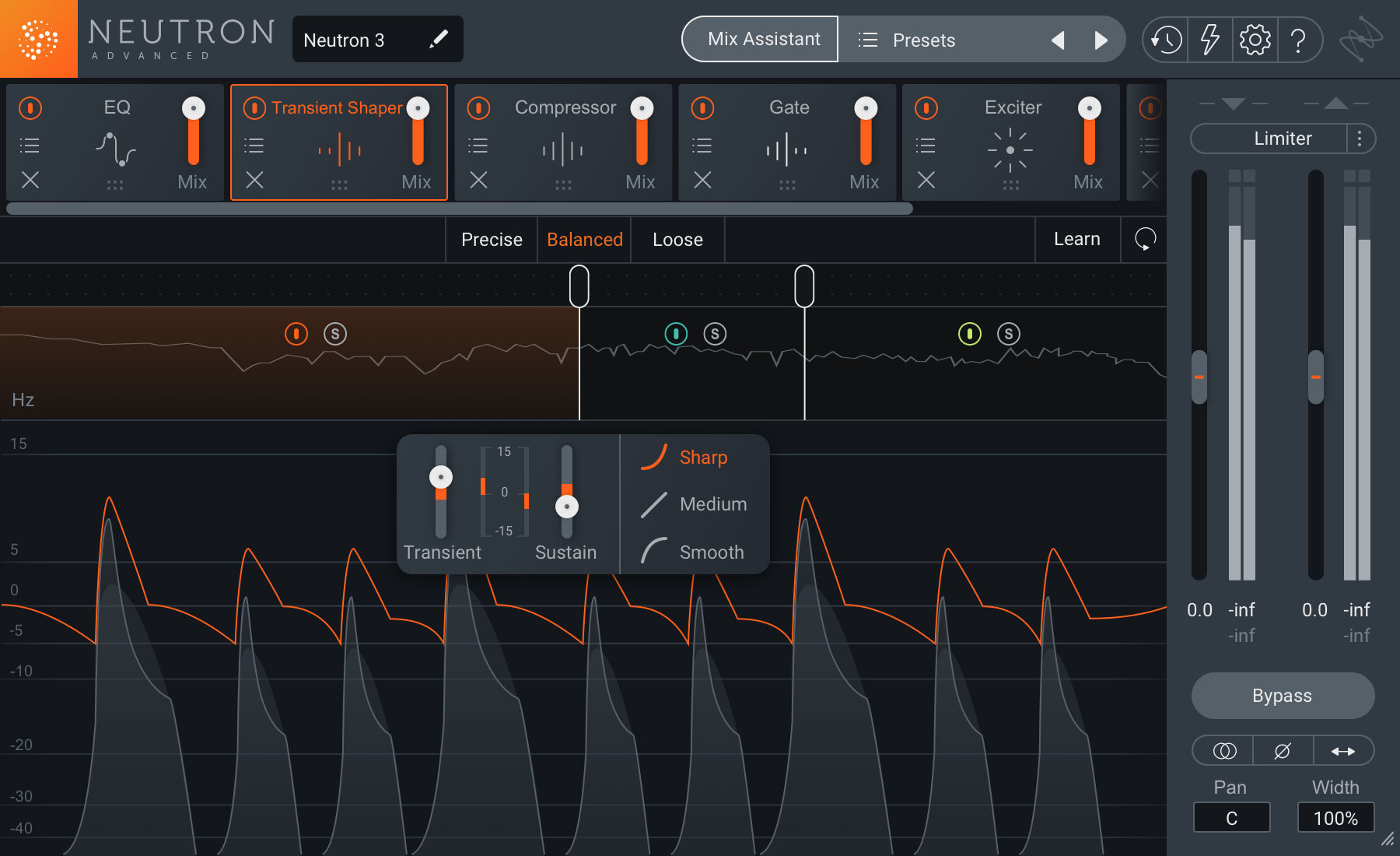 When it comes to handling transients, sometimes there’s a more effective tool than your usual dynamics processors—processes such as compression, gating, expansion, or various combinations thereof. I speak, of course, of transient shaping, and luckily, Neutron offers a great Transient Shaper within the plug-in.

In layman's terms, the transient is the initial part of a sound, its arrival. There is, by definition, an envelope to every sound—a signal must always go from silence to an amplitude for it to be audible—but a transient is more of a sudden burst than a gradual onset. So when we talk of transients, we usually mean sounds with sudden, initial bursts of energy. Think of a drum hit, a guitar strum, a vocal consonant, or anything else with a hard beginning.

Transient shapers involve similar principles you’d see in compression and expansion; in fact, the original hardware transient shapers were composed out of VCA circuits—the same circuits found in many of your favorite hardware compressors. However, transient shapers do not boast the typical controls you’d see on a compressor. You won’t find a threshold or ratio control. Instead you’re often presented two rather simple knobs: attack and release.

Personally, I like to think of transient shapers as sound sharpeners—processors that create a sense of dynamic excitement. “Snap” and “smack” are words often used in conjunction with transient shapers, though the process can also have the opposite effect, dulling the impact of a sound, or enhancing its sustain.

They may have simple controls, but don’t let their ease of operation fool you: it’s just as easy to foul up a sound with a transient shaper as it is to serve the music at hand. Also, don’t let relative easiness lull you into thinking they accomplish simple feats; transient shapers can either engender or serve as the basis of complicated and rewarding sounds.

So without further delay, let’s cover six times a transient shaper just might beat a compressor.

1. For sharper emphasis on drum loops

If you’re given a drum loop and you want to make it sound livelier and more dynamic—something with more attitude, sure, you could compress it in all manner of ways. You could also parallel-process it in the “New York” style.

But for a quick-to-achieve in-your-face face sound, try reaching for a transient shaper first. If you crank that attack knob, each kick, snare, and hi hat will feel like it’s slicing you more. If you crank that release, you’ll feel more roomy presence after that slice. Decreasing the release will have the opposite effect, excising the room.

No matter what unsubtle sound you’re going for, the transient shaper can get you there quickly. When pushed, however, it may not sound natural, so do be tasteful.

For an example, check out this drum loop.

Now, here’s that drum loop with an increased attack and decreased release in Neutron's Transient Shaper. The effects have been emphasized to really show off the sharpness of what a transient shaper can do.

But that’s three plug-ins, and it took a good deal more time to get there, and it’s not quite as exacting as I’d want it—indeed, here we see how a transient shaper can get the job done not just more quickly, but more cleanly to boot.

Now, here’s the loop with the attack turned down and the release cranked a bit. With grooves like the one supplied here, where the ride is more prominently featured, we can see how this kind of processing could be an asset for certain sections.

Drum Loop with Attack Turned Down and Release Up

You can also use a transient shaper on individual percussive elements to great effect, shaping their impact on the sound of the kit as a whole.

Say, for instance, I want to feel the resonance of the snare in a drum kit, but I don’t want to alter the character of the snare all that much. Instead of reaching for a compressor, an EQ, or a parallel compression track, I can nudge the release value of a transient shaper up a bit, without really altering the frequency balance all that much.

Or I can dive in and get surgical: Let’s say we want to emphasize the beater-head sound of a kick drum. Here we can use something like Neutron’s Transient Shaper in multiband, select the upper mids, increase the attack a bit, and bring down the release.

You can also deemphasize a cranky high hat by turning the attack down. Again, it’s like a sharpener—or eraser—for elements with hard transients.

Sometimes an acoustic guitar or a piano comes my way and it’s just too bright for the mix. Now, a static EQ doesn’t work because it takes too much life out of the signal. A compressor won’t work either, because evening everything out after the transient is undesirable—it takes the musicality out of the picture.

You could probably make the whole thing work by spending a few minutes with a dynamic equalizer, a multiband compressor, or a multiband expander—but this isn’t a creative issue; this is a technical thing you’d rather just fix and get on with so you can get to the fun stuff.

Here’s where I’d reach for a transient shaper with a decreased attack and maybe a slight increase of sustain. This move can really deemphasize the harsher, plonkier aspects of an acoustic instrument and bring up the mellowness. Give it a go.

You also see transient shapers in post-production scenarios. One wouldn’t think they’d appear in movies, but they do.

I remember interviewing sound designers for Forbes.com about the work they did in Lost and other television shows; often, they talked about using transient shapers as an intelligent gate in dialogue. With a slightly increased attack and a dramatically decreased release, a transient shaper can really mitigate unwanted ambience.

Since that interview, multiband transient shapers, like the ones found in Neutron, have really come in handy for me. Once, I was hired to mix an hour long live panel discussion for a podcast. There was a resonance that only occured in a band between 600–1500 kHz in a comedian’s microphone microphone. Conventional de-noisers and de-ambience modules didn’t do the trick, even in spectragraphic implementation, because the resonance vacillated at various points between those two frequency bands. Sitting down to analyze (and then highlight) the exact frequency segments for an hour worth of audio would’ve taken ages. Instead, I turned to Neutron’s Transient Shaper in multiband mode, set up the midrange band, and cleared up the problem in a matter of seconds instead of hours.

5. To create dramatic rhythms out of subtle sound sources

Here’s a more creative application of a transient shaper: if you’ve got a melodic or chordal loop with rhythmic flare—a percussive element that could be emphasized within the loop—you can use the transient shaper to bring this rhythm out, so it becomes the standout feature. Simply up the attack drastically and reduce the release musically and watch as the transient shaper latches onto the natural rhythm and emphasizes it. In that way, this stock synth-pop loop:

What do you do with this effect now? The answer is up to you, of course, but it does lead us to our next topic.

Now, that example sounds somewhat silly and slapdash on its own. But this effect works great with other paired processes, like delay or reverb. For instance, we could slap a spring reverb on the transient-manipulated loop, and then blend that back in with the original. That would sound like this:

Or, what if we took that loop, reversed it, added reverb, reversed it back, timed the resulting track creatively, and put the whole thing through delay? That could sound like this:

The point is that transient shapers can serve as the basis for complicated effects processing, provided you use the imagination at your disposal.

These are a few reasons to choose a transient shaper over a compressor—but it must be reiterated that as with all processors, a light hand is usually the way to go, unless you really know what you’re trying to achieve. Because of the way they grab sound, transient shapers can often make elements feel pulled-apart and sound unnatural. It’s an aspect that might not avail itself to you at first—the process is often very seductive—but after awhile, it may mess up the proceedings.

So proceed with care. But, by all means, proceed: life is transient, and we must shape it where we may!