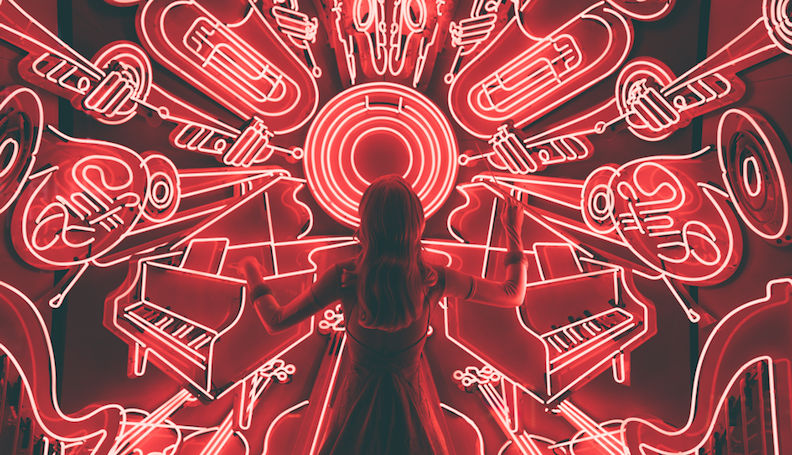 At a 2015 tech conference, song identification app Shazam revealed the data they use to accurately predict within a month whether a song will become a US Billboard number one. Nearly all successful songs follow the same pattern: they convince people to pull out their phones and identify it within the first 10–20 seconds of starting.

Being able to quickly connect with listeners is the basis of Spotify’s business model for artists who share their songs on the platform. A song needs to be played for 30 seconds to count as a single stream and for payment to be issued. The way a song starts has always been important in pop, but now it seems more crucial than ever in music production.

In this article, I’ll show you six creative ways to start your song so it cuts through the noise and gets listeners to pay attention.

Starting a song with a field recording or soundscape can transport listeners to a real or imagined space before the first note even hits. Room tone, mic feedback, and drummer count-ins are a few common examples used in rock and indie music. Electronic music often employs spacey drones and bleeps to conjure up images of the future. Recordings of nature, like water and birds, work well to calm listeners before a downtempo song.

Kavinsky’s “Nightcall” quickly sets a mysterious atmosphere with a phone call and wolf howl. Like the start of a good detective novel, this intro gives listeners something to wonder about, like “who is making the call?” and “who are they calling?” These questions are answered in the lyrics that kick in just over the 30 second mark. Spoiler alert: it's a guy calling a girl to tell her how he feels.

UK producer Floating Points takes a similar, but more playful approach on “King Bromeliad.” It opens with party chatter and a live recording of the song being played in a club before switching to the true, hi-fidelity version. This flings listeners into the song, but it takes about 40 seconds to happen, which is quite long in pop music time. If you want put out a song with commercial potential, keep scene-setting to a maximum of 10 seconds.

Coming up with new material for a song intro can be time consuming. If you feel stuck at this stage, use information already in your song and chop it up. It will save the headache and still sound great.

Pharrell and Chad Hugo do this all the time. Almost all of their biggest hits start with a four count loop of the first beat. Listen below to the example I put together to demonstrate this. It's much more exciting than a clean start and is radio friendly too.

A$AP Rocky regularly re-samples his songs for intros. On “OG Beeper,” he kicks things off with a reversed drum loop that flips into forward motion for the first verse. “Hun43rd” begins with a distorted Thug Life sample that pans wildly between the left and right speaker then winds down like a stopped record. The same sample underlies his verses later on. When listeners make this connection they will feel (whether they recognize it or not) like the have solved something.

3. Have an early chorus

An explosive chorus that comes in early is a sure-fire way to connect with listeners. You can hear this cut-to-the-chase approach on “Thunder” by Imagine Dragons.

The group keeps the first verse, which starts from the first second, sparse. Besides the lead vocal, a drum beat, and a muted bassline, there isn’t much else. This makes the chorus slam. The bass is unleashed and the drums are turned to 11. A catchy chopped vocal and multiple lead vocal layers are brought in to provide an anthemic feel. And this all happens within the first 35 seconds. It risks feeling a bit rushed at the start but the big chorus payoff makes you forget.

Dance music duo ODESZA use a similar approach in their song “Line Of Sight” with WYNNE and Mansionair. The song begins quietly with a low-passed synth and bass, deliberately filtered to make room the vocals in the pre-chorus. Right before the song reaches the chorus there is a short pause. Then, the synths and bass filters are opened up and the vocal hook and drums are brought in, filling up the frequency spectrum. Looking at the spectrogram of “Shine of Sight” below, you will notice the changes in frequency energy from the intro to pre-chorus to chorus. It's a steady build up toward an emotional peak. 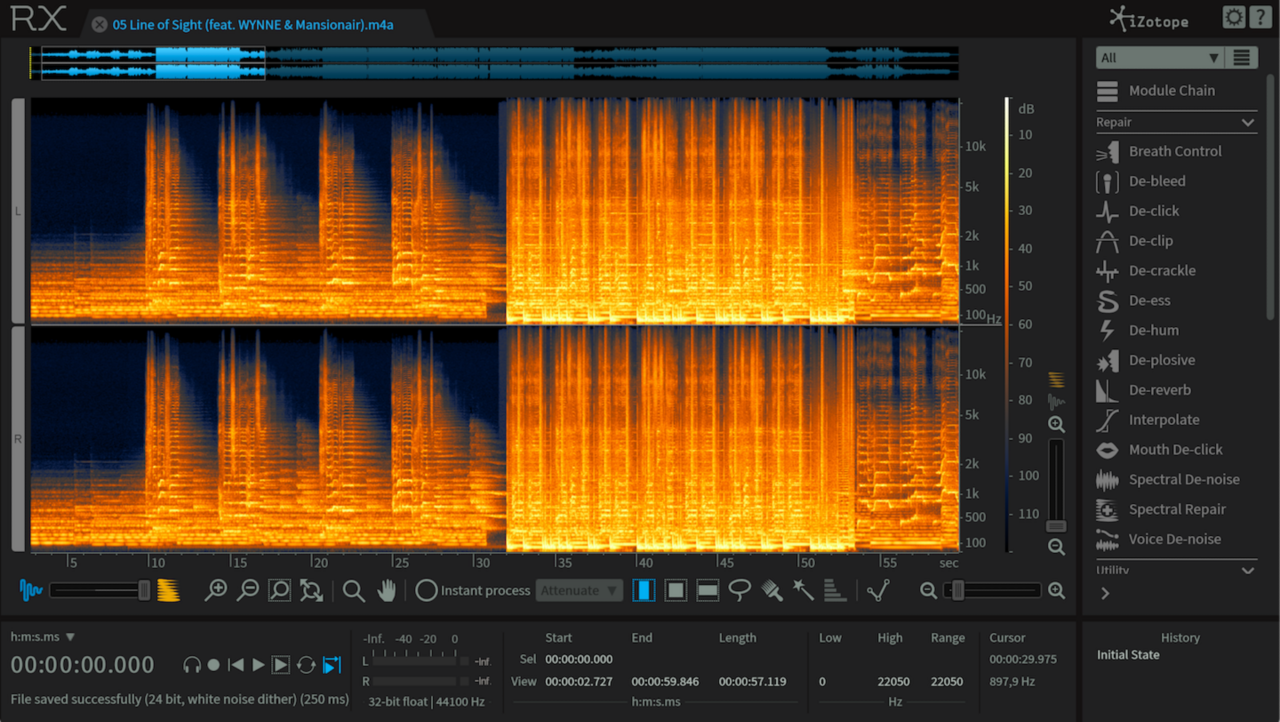 If the instrumental parts were unfiltered during the intro and pre-chorus, the chorus would not have been as memorable.

To play the devil's advocate—not all pop songs need flash and a high signal level to quickly win over listeners. On “Location” singer-songwriter Khalid demonstrates how a sense of space and dynamics can be just as captivating.

The intro features just three elements: hand percussion, synth plucks, and a whole lot of silence, or negative space. Silence is used a musical device to play with listener expectations and intensify the emotional impact of Khalid’s silky smooth vocals once they are introduced after 13 seconds. His vocals also follow a stop-and-start rhythm, keeping you hooked for each new line.

Every musical element on “Location” has its own place in the frequency spectrum making for a mix that is a well balanced and easy on the ears. You can clearly hear all the little details—like bits of crackle and clever vocal doubles—making for a more intimate experience. It doesn’t sound like music for crowds.

Today, a lot of importance is placed on the vocal hook at the chorus. As you heard and saw above, artists like ODESZA treat the vocal hook as big event that sells the song. But listeners can still be won over with memorable instrumentation that inspires them to hum, tap on a table, or pull out an air guitar.

A great riff, synth sequence, or drum beat is enough to drive a song from start to finish, so it should be introduced from the moment listers press play.

Daft Punk have always relied on instrumental hooks to carry their songs, and in recent years they’ve mastered the method with “Get Lucky” and “I Feel It Coming.” Both songs start with, and are defined by ageless disco guitar and bass riffs that just keep going without boredom settling in.

If you want to save a catchy instrumental hook for later in your song, start things off with an altered version then build up to it. For example, an acoustic version for the intro, then a synth or electric version for the verse or chorus.

One thing to remember—the hook shouldn’t upstage the vocal. If there is an instrumental passage with a quick succession of notes or a wild pitch bend, pull the vocal out for that moment out or have the vocalist sing a long note to avoid a cluttered mix.

Many songs catch listeners’ attention right from the get-go with a sound that is surprising or strange. This approach can border on gimmick so choose your sounds carefully. The false start should seem like a part of the song even if it is different in tone or style. And it only needs to be a few seconds in length to get listeners wondering “wait, what was that?” before vanishing and letting the music take over.

You can hear some great examples of this in the following:

You get the idea. In all of the examples, the music that comes after the false start is well done, which is really the most important thing. Unfortunately, simply adding a weird sound to a song that still needs work won’t make it better. If this was true I’d be a famous music producer by now.

As an experiment, bring back the unique sound once or twice during your song to give it a new meaning.

Streaming has introduced many changes to the way we make and consume music, many of which are still yet to come. But, as you noticed from the music production techniques provided in this article, the basis of a good song and the intro that starts it off is not so different than ten or twenty or thirty years ago: listeners still seek out creative musicianship, sampling, and engineering.

One major difference is the degree of competition in the streaming environment. A record store can only fit so much. Spotify has tens of millions of songs. Put your best foot forward and show people why they should listen to you as quickly and sensibly as possible.