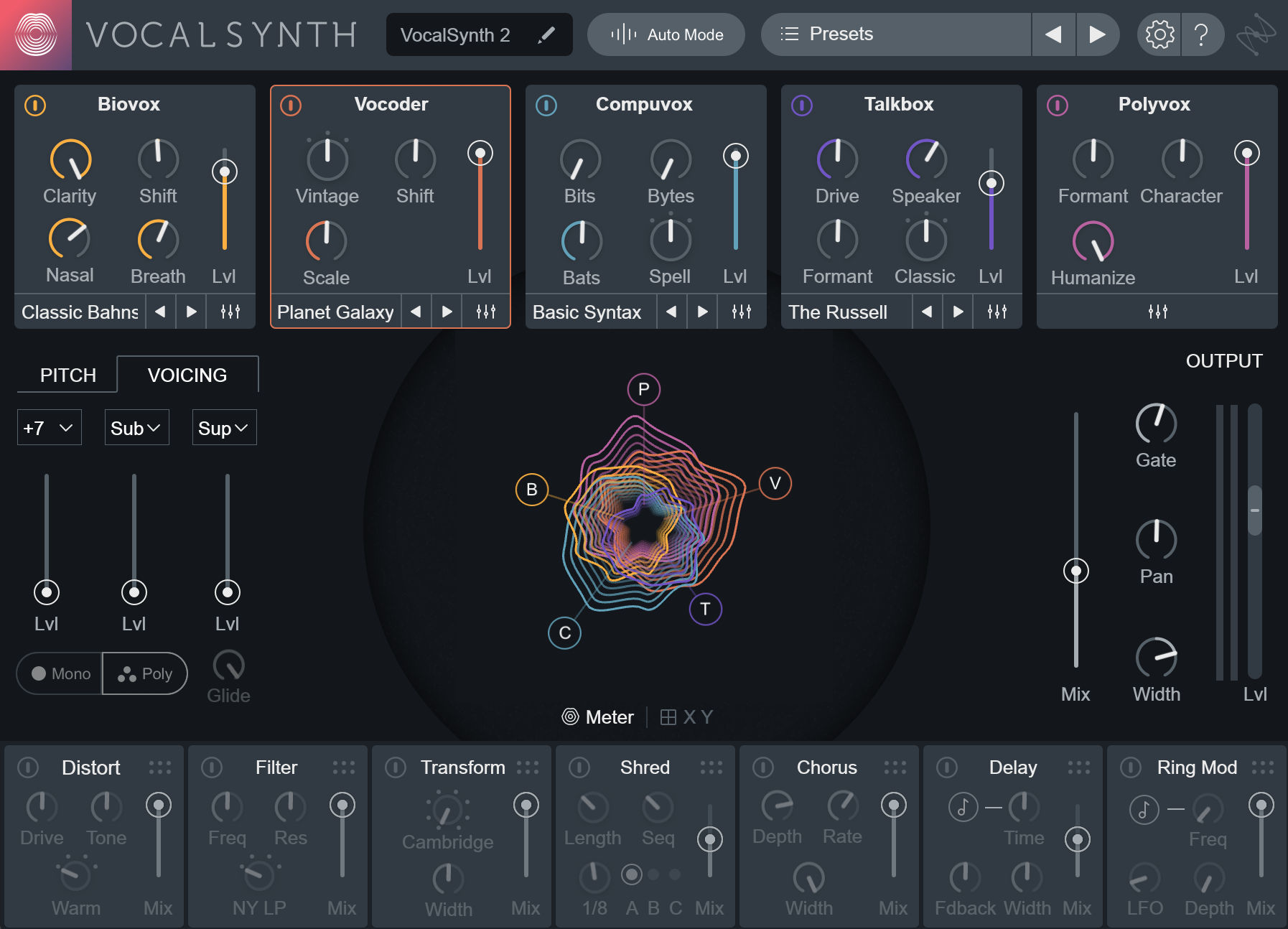 If you use VocalSynth 2 or have watched our tutorials for it, you already know it’s a versatile effects engine capable of everything from subtle voice enhancement to chopped-and-pitched insanity. When you’re short on ideas, it's encouraging to pass a vocal through and just listen to how the plug-in changes it’s characteristics, tweaking parameters to taste.

But what about some more functional applications when mixing vocals? Where can you plug VocalSynth 2 into a song to improve it? And what are the tell-tale signs a recording might need its unique assistance? In this post, I’ll answer these questions and more, giving you tips for productive vocal mixing sessions. Here are five times to use VocalSynth 2 in a mix.

While they certainly exist, I have a hard time recalling a great song that doesn’t have a great chorus. With so much of a song’s success reliant on the strength of the chorus, you should shower it with attention, widening instruments, filling out the frequency spectrum, and dropping pleasant surprises that excite the ears.

You’ll also want to differentiate the color and texture of chorus vocals to clearly distinguish them from the verse. You can dial in bitcrushed sizzle with Compuvox or go for something smooth and shimmery with Polyvox.

If theatrics are what the song calls for, go ahead and mute all the instruments for the first line of the chorus, leaving only the lead vocal and a VocalSynth 2 patch with considerable low-end to fill out the spectrum. To do this, I recommend going into the synthesizer engine in Biovox, which is capable of producing some gnarly square and saw bass notes reaching two octaves down. Both Julia Michaels and Zedd have used this technique recently. Depending on the song, it might be better to leave the first chorus alone and bring in VocalSynth 2 for the second, giving listeners a little something extra at just the right moment to carry them through to the end.

Just be sure you’re not overloading the choruses—if you keep adding vocal and instrument parts, it only makes the mix muddier. Take the opposite approach and remove something from the verse before it. This contrast can have the effect of making the chorus sound larger without actually increasing track count or processing power.

A vocal hook is often found in the chorus, but every song section presents an opportunity to reel in listers with memorable vocal phrases. You might achieve this with a feel-good millennial whoop, a surprisingly catchy reversed lyric, or an eccentric ad-lib (looking at you, Cardi B). It's hard to define exactly what a vocal hook is, but you know it when you hear it.

To give hooks an unusual quality, VocalSynth 2 is quite useful. In aggressive hip-hop or rock songs, for example, the Biovox and Compuvox modules provide a growl that’s more convincing than saturation, but not as overwhelming as full-on distortion. On a scream or phrase before the chorus comes in, this provides some welcome hype. If you need more conventional effects to perfect your vocal, there are several at the bottom of the GUI, offering up a host of tools that would otherwise require a sprawling insert chain.

On a “hey!” or “yeah!” chant, use Talkbox and Polyvox modules to alter formants (the resonant frequencies that contribute to voice timbre) and improve articulation. Turning formants down gives the impression of a deeper voice and turning them up will make a voice sound high-pitch and more nasal—all without changing the note itself.

By blending in only part of the original signal with VocalSynth 2, you can flip a single vocal track sound like it was performed by a small group without an overly synthetic effect, despite the plug-ins name.

Check out the before-and-after in the clip below. 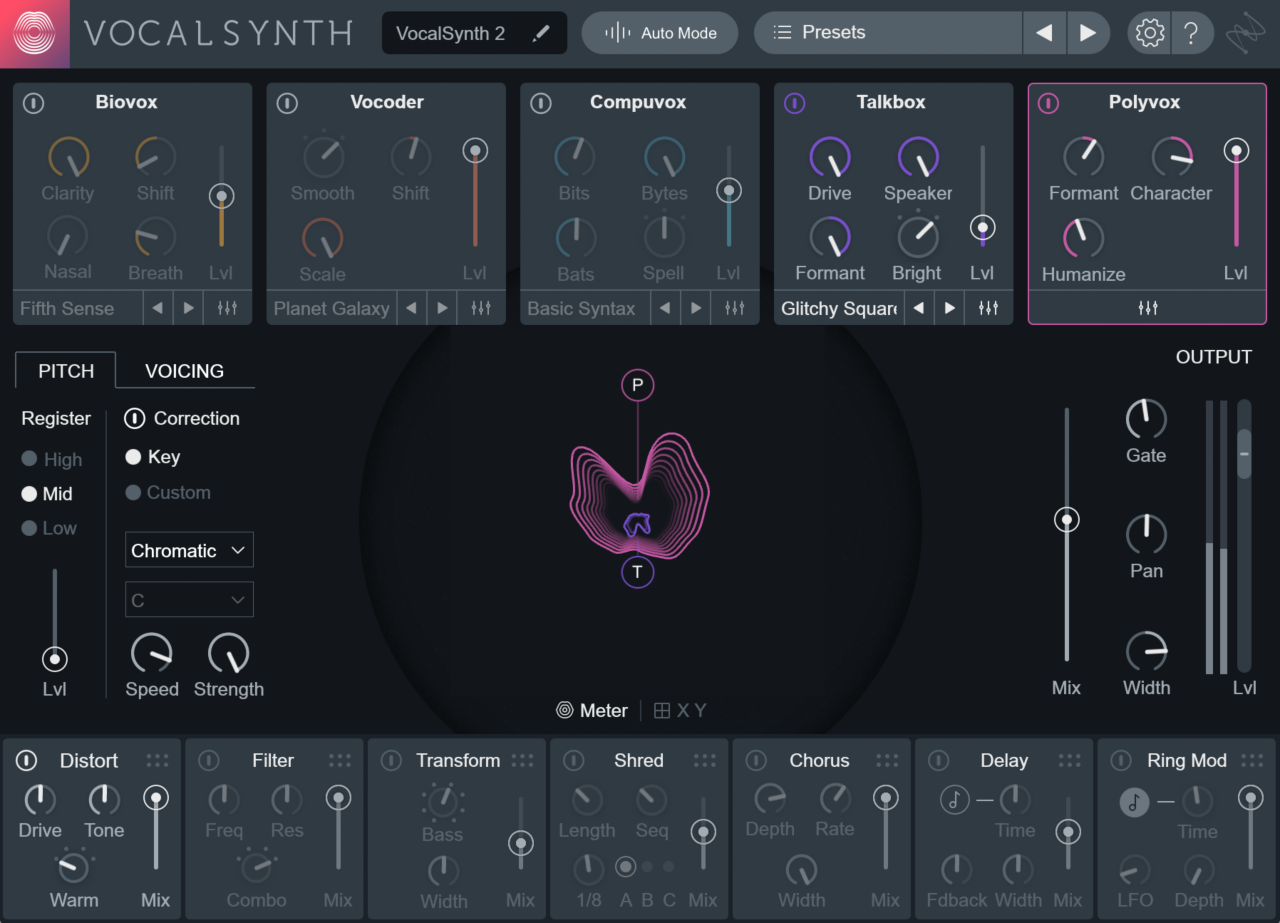 I have the most fun with VocalSynth 2 working with electronic music, since the robotic effect the plug-in excels at doesn’t need to be camouflaged, but for the adventurous, there’s nothing stopping you from applying it to natural-sounding signals.

3. Spice up repetition in the chorus

The lyrics in a chorus usually contain the song title, repeated many times to make the tune more recognizable—Outkast, Foo Fighters, and Daft Punk have all done this to extreme effect. We like hearing repetition in music, but with every repeat of “sorry” or “I miss you” the feeling we got the first time around lessens, and we might just hit the next button if there isn’t enough variation.

Let’s imagine the following scenario: the vocal clip below is from a song called “Yeah.” For the chorus, the singer repeats the first half of the clip (the dry audio) twice. Thing is, once we get to that second round of repeats the whole “yeah” shtick gets a little tedious and we need a something to drive the song forward. People should be pumping their fists the second time around. For a healthy dose of excitement, I slabbed on an instance of VocalSynth 2 with every module enabled, adjusted each one to taste, then let the plug-in do its thing. I also added Vocal Doubler (our free plug-in!) for width.

For the purpose of demonstration, the effect is perhaps more aggressive than what’s necessary, but you should get the gist of it. The width is obvious, that’s for sure. But we also get a vocal that is fiercer and more capable of stirring up emotions.

Does it make sense to release a trap record without a synthetic pitch-corrected vocal? Can a reggae record not include dubbed-out delays on the backgrounds? What about processing a folk singer with distortion?

While artists are certainly mixing up styles more than ever before and consumers seem less concerned about classifying music by genre, we producers and mixers still need to be able to drill down into the details of what defines a particular genre in order to make music that meets client and listener expectations. Rhythm, pacing, tempo, and instrumentation all contribute to the overall sound of a genre, as does vocal processing.

VocalSynth 2 provides you with the tools to achieve an appropriate vocal sound for your chosen genre. As a starting point, we have video tutorials for mixing modern rap, pop, and rock vocals.

This same concept applies to mixing vocals for the aesthetics of an era. If you’re mixing a retro throwback jam, processing some lyrics with a Talkbox effect will surely complement the bouncing bassline and exaggerated drums. To capture the lo-fi charm of cassette culture, you might want to distort vocals or give them an edgy quality.

With curiosity and patience, you will find the right settings in VocalSynth 2.

5. Spice up vocals with unusual harmonies

VocalSynth 2 allows you to easily bring interest to vocals with a synthesized harmony component. To do this, click MIDI Mode on the top of the plugin and follow the steps provided, which vary slightly from DAW to DAW. With this feature enabled, you can control the notes and harmonies generated by VocalSynth 2 from a MIDI device. 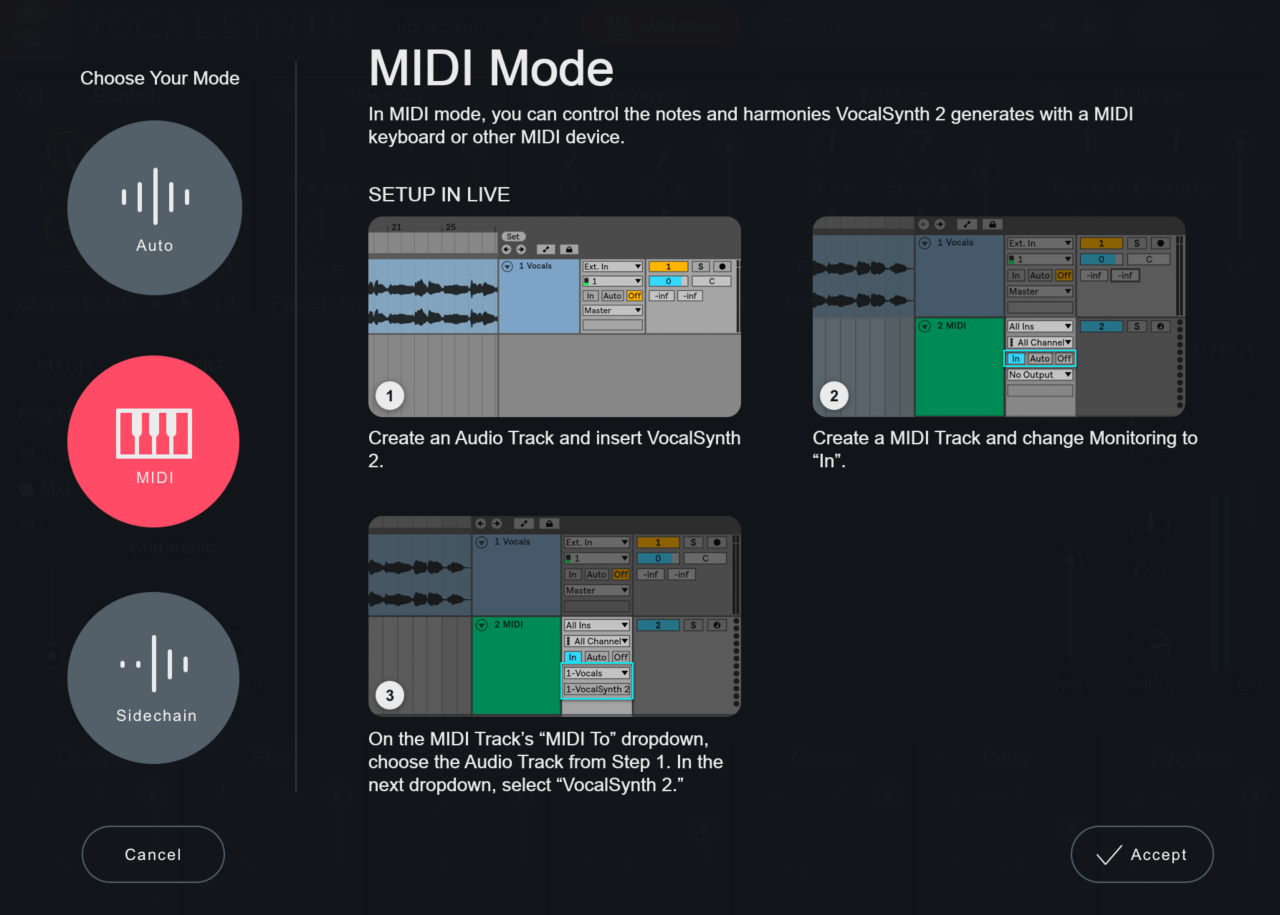 I put together two different examples to illustrate the possibilities. Listen to dry audio first, then stick around for one version using chords as a MIDI input and another with individual notes in unison (which isn’t really a harmony, but sounds neat nonetheless) that follow the vocal.

The strange, digital qualities you get from VocalSynth 2 modules—which are still fully tweakable in MIDI mode—offer a fresh take on traditional harmonies recorded in-studio. If you’re mixing vocals that fall under the wide umbrella that is pop music, this is one way to sound ahead of the curve.

Unless you have a knack for harmony it can be a challenge to come up with arrangements. A safe bet is to borrow lead instrument voicings or convert your audio to MIDI (a simple, but sometimes faulty feature in Ableton and Logic) then play around with note placement. You can also transfer your vocal into Melodyne and go note-by-note referencing the note pitch.

These are but five ways to use VocalSynth 2 in a mix, and if you’ve made it this far I’m sure you’ve already discovered a few tricks not included in this list. The intuitive plug-in design encourages experimentation, which is often how the best sounds are made, but it is also helpful to have a few tried-and-true techniques in your back pocket when you need them.