Listen to Burial, Boards of Canada, Flying Lotus, and even certain Autechre songs, and nostalgic, grainy and otherwise warped timbres and sounds stand out. Message boards are full of people asking how to recreate these sounds with electronic music equipment and recording techniques, and a number of VSTs or hardware gear appear to offer shortcuts to these warped sounds.

The reality is that no single solution exists. A combination of techniques, like sampling of various sounds, strong analogue and/or digital synth melodies, software and hardware signal processing, and various recording strategies can help achieve that sound.

One strategy is to use iZotope’s Trash 2 sound mangling plug-in. Trash 2 works equally well for the budget-minded musician using all software and the professional producer with a collection of hardware who records and arranges in a DAW.

Below are some approaches inspired by the sounds of the artists mentioned above, as well as other musicians in similar genres.

This retro electronic music sound is what put Boards of Canada on the map. If getting their sound is important to you, just know that much of BoC’s brilliance comes from the chords they use and the overall musical composition. So, the first order is to really work on the melody and structure of the song, then get into individual track effects and overall sound recording. And instead of merely duplicating BoC’s sound, try to adopt some of the Scotland duo’s sonic experimentation for your own purposes.

Before running your synths, percussion, or even an entire track through Trash 2, think about detuning your synth, then assigning an LFO to slowly sweep your filter. (You can also use the plug-in’s two filters and assign LFOs to modulate your tracks.) These two moves will go a long way in bringing out different tonal qualities, because the detuned oscillators are drifting in and out of tune, while the filter is sweeping the signal to reveal different parts of the waveforms. 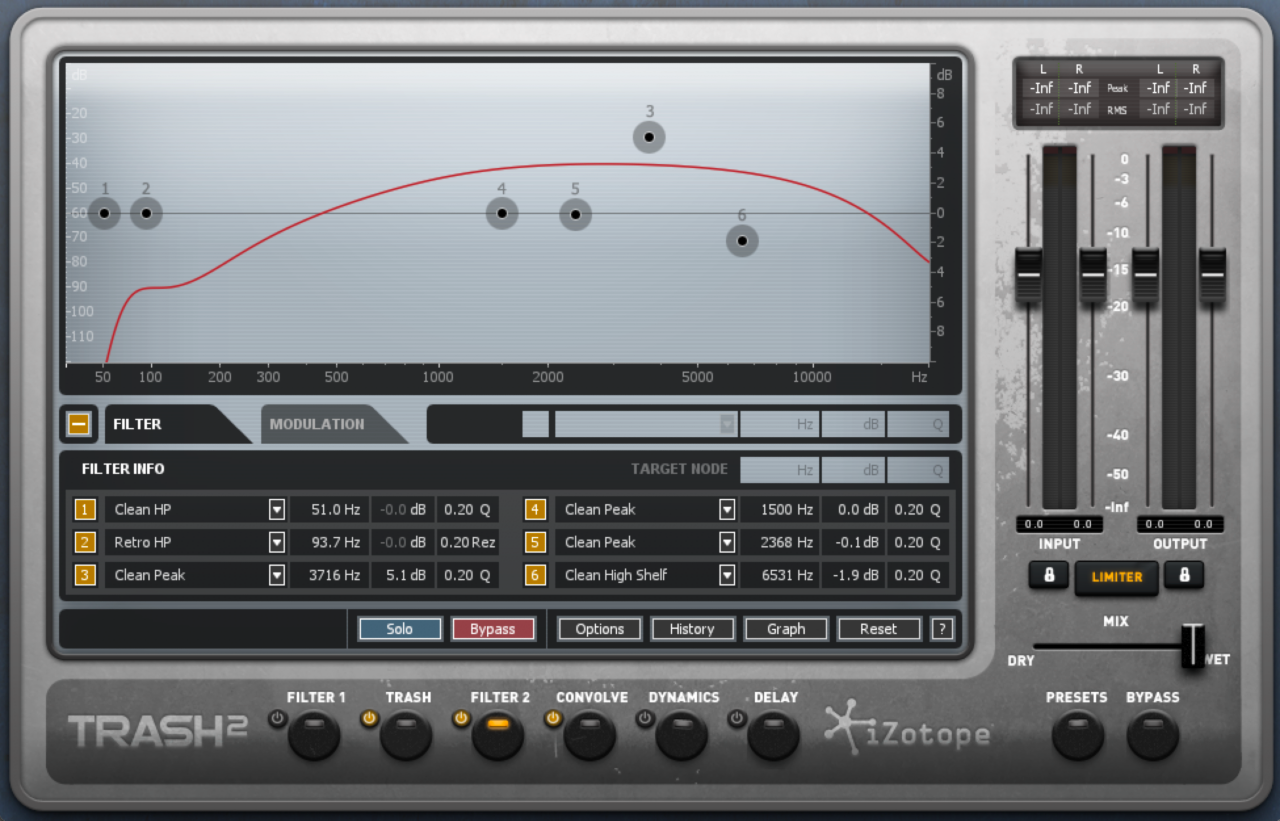 Once this is accomplished, add Trash 2 to your track or bus. Activate the Trash button, then navigate to Saturation. Once there, select Tape Saturation. At this point, feel free to mess with the Tape Saturation settings before moving on to the Filters. Try the Retro HP (high pass filter) and Clean HP, then tweak the filter curve until you find your sweet spot. 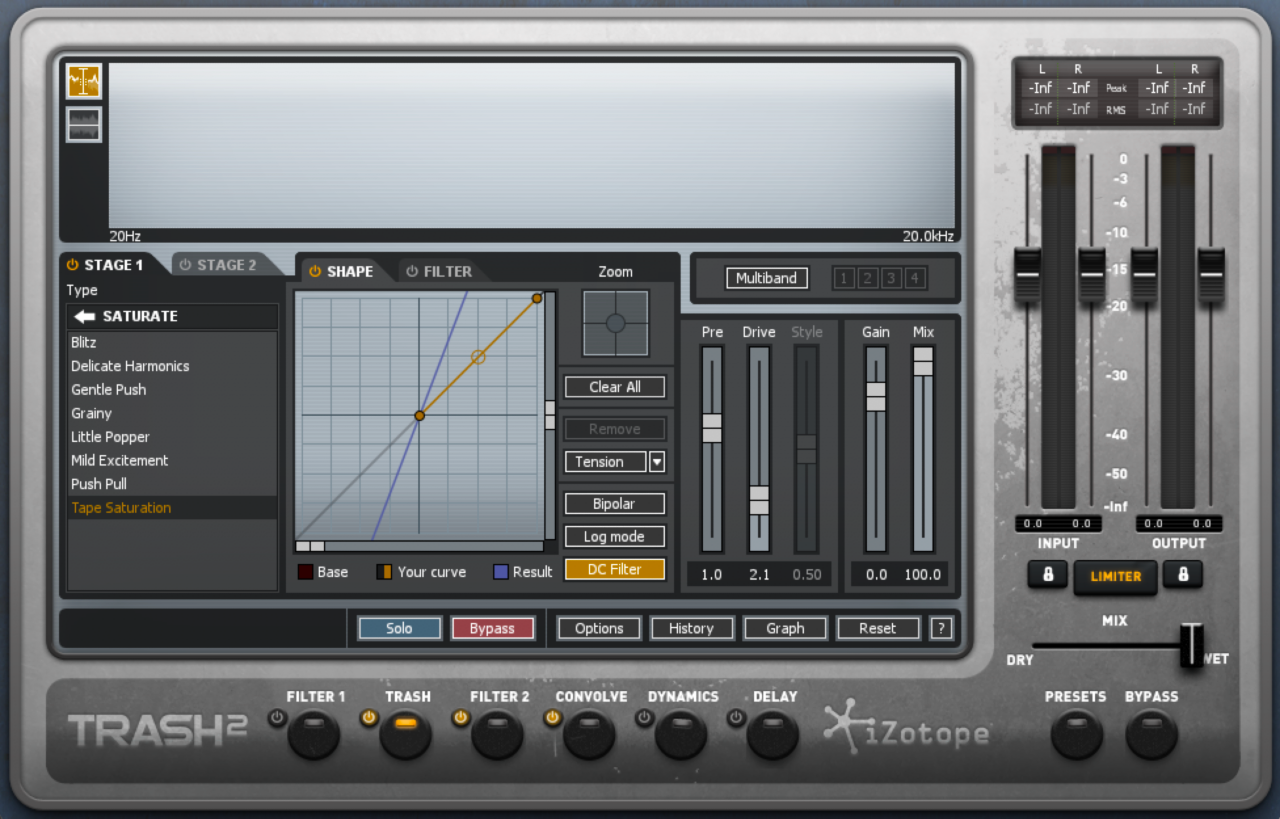 Another tool for this sound is the Convolve setting, an impulse response filter that allows users to make their track sound like objects such as sheet metal, bodies, or even animals. Navigate to Bodies and select Intimate, which will add a certain clear warmth to the sound (Tape Slip, TV Scoop, and Cheap Radio are also great settings for this sound). Taken together, and set to almost fully wet, these Trash 2 settings will help give you that retro, grainy sound of a lost and warped tape reel.

In this loop, we applied the Tape Saturation distortion, Retro HP filter, and Convolve’s Intimate setting. We recorded two drum tracks and two synth tracks (no bus), and applied Trash 2 to all of them to give it a Boards of Canada sound.

Perhaps you want to create ambient sounds heard on Aphex Twin’s Selected Ambient Works Volume II. In that case, Trash 2 features a number of tonal possibilities that let you slightly tweak your synthesizers, or heavily affect your guitar or other ambient sound source.

When it comes to Trash 2’s distortion effects, try using them judiciously. On an ambient track, some distortion effects in the Trash button—particularly in the Heavy menu—can turn the tone into harsh noise. This might be cool if you’re exploring the darker, more industrial side of ambient, but no so if you want gentler, more pastoral soundscapes.

Others, like Iris Aliasing and Harmonic Control, add a little sparkle to the tone without making it blister. Consider adding a filter, such as Rez HP, along with the Flam (in Convolve’s Tails menu) to further augment your ambient sound. 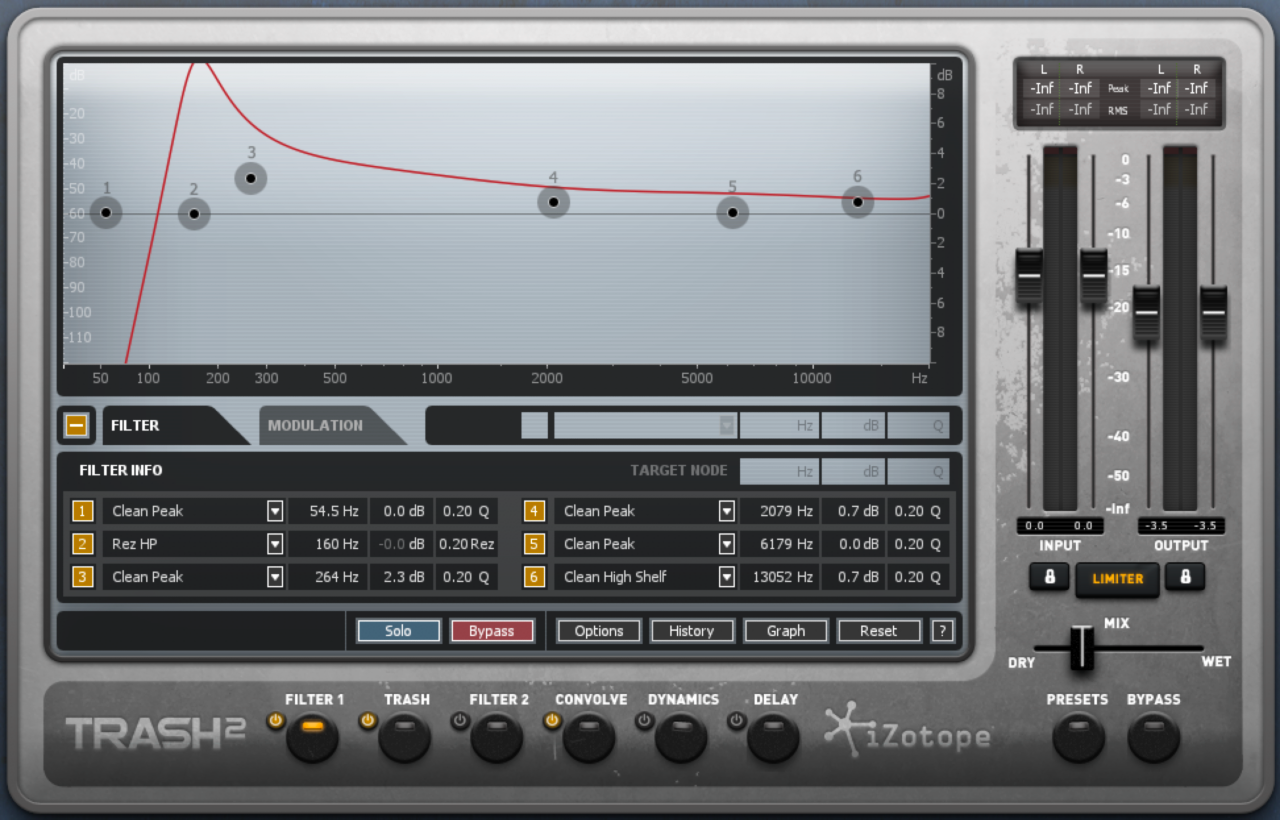 In this ambient loop, we applied the Rez HP filter, Harmonic Control drive, and Convolve Flam to a synth sampled from the Animoog app and sequenced on an Akai MPC Live.

Uncover the dark side of dance

Trash 2 can also be deployed for more experimental dance tracks—the type of sounds you might hear in an Autechre song or a track by Burial, whose music is influenced by UK garage, dubstep, jungle’s spacier sounds, and ambient music.

Keep in mind that Burial’s music is incredibly singular. He uses creative sampling (of YouTube videos), rhythmic idiosyncrasies in the Soundforge DAW (most notably on Untrue), and his own rhythmic and tonal sensibilities, so it’s a bit of a fool’s errand to try to replicate it wholesale. But, if you’ve laid down tracks full of various samples, and want to add some Burial-esque atmosphere to the overall sound, try experimenting with Trash 2.

We mentioned Convolve’s animal sound bank above. This is a good opportunity to experiment with it. Navigate to MechAnimals, then see which of the nine options strikes your fancy. Toad, for instance, has a really interesting reverb with a dark, almost metallic timbre; as does Snake, which also applies a sort of hiss to the mix. Tortoise is another interesting option—it sounds as if one is hearing the music play inside a shell, as it were, or inside a building with unique reverb qualities. Combine this with the Garage setting in the Fuzz menu of Trash, and mess around with the Filter and Delay buttons, and you will quickly be exploring the darker, more experimental side of dance music. 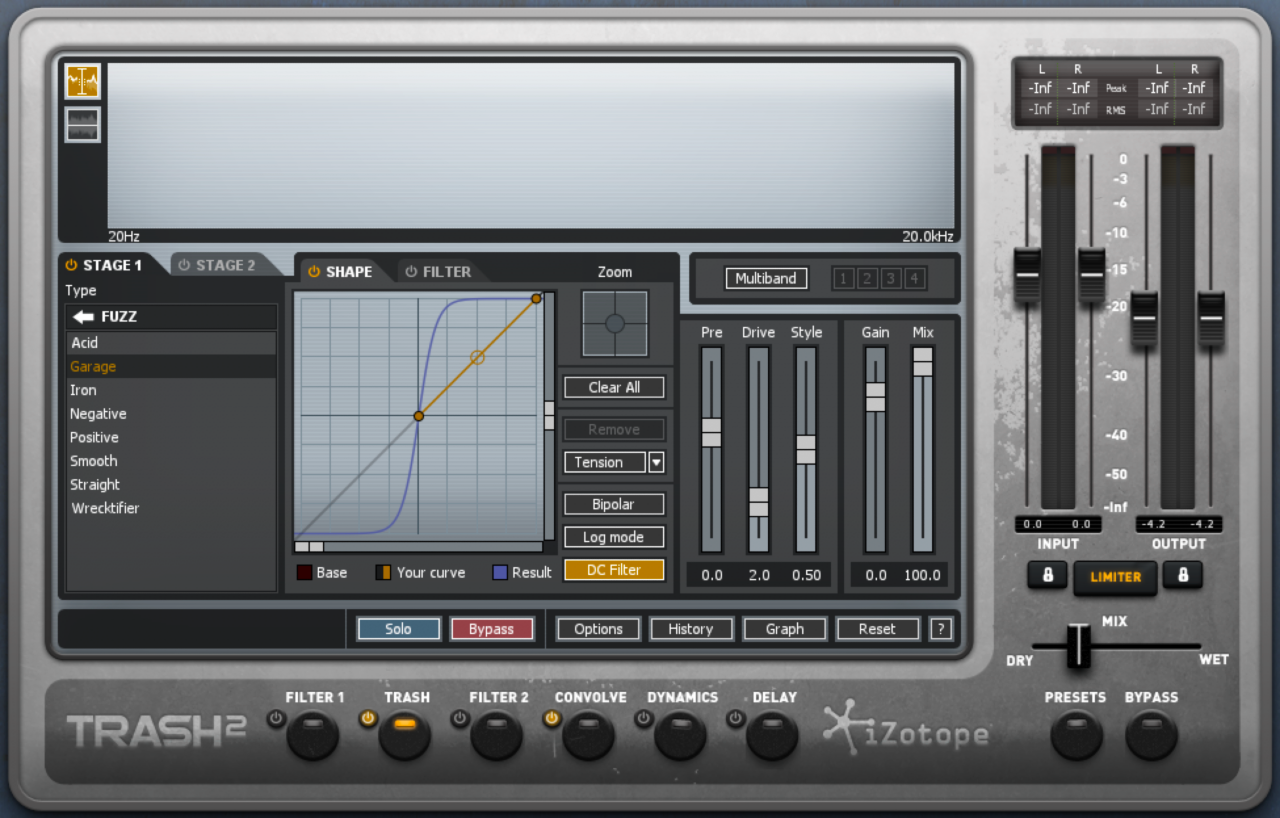 The three MechAnimals selections above would also work well in creating a sound reminiscent of Autechre’s track “Bladelores,” or some of the duo’s other tracks that feature cavernous reverb. Trash 2’s many-splendored features could also help you arrive at a sound a bit like Irish duo Bicep’s track “Orca,” with its metallic, reverb-drenched synthesizers.

The key is to just experiment with Trash 2. See what it does, and you will soon arrive at the darker side of dance music, but on your own terms.

Trash 2 with Garage Fuzz and Toad

In this loop, we applied Garage Fuzz and Toad in the MechAnimals menu of Convolve to a sound collage created on an Elektron Digitakt. Experiment with shorter delay times to mess with the way an arpeggiated or sequenced melody unfolds. You can also degrade each delay algorithm with a dedicated Trash fader, which results in some interesting tones, especially on the Tabe/Tube delay. And though the Delay doesn’t have dedicated modulation algorithms, you can add complexity to your sounds with Trash 2’s two distinct filters, which can run be run in series or parallel, and then modulated with multiple LFOs.

For this synthesizer sequence, we set the Delay to Analog and engaged Host Sync with a little nudge of the Trash fader, then applied Convolve’s Cheap Radio to further augment the sound.