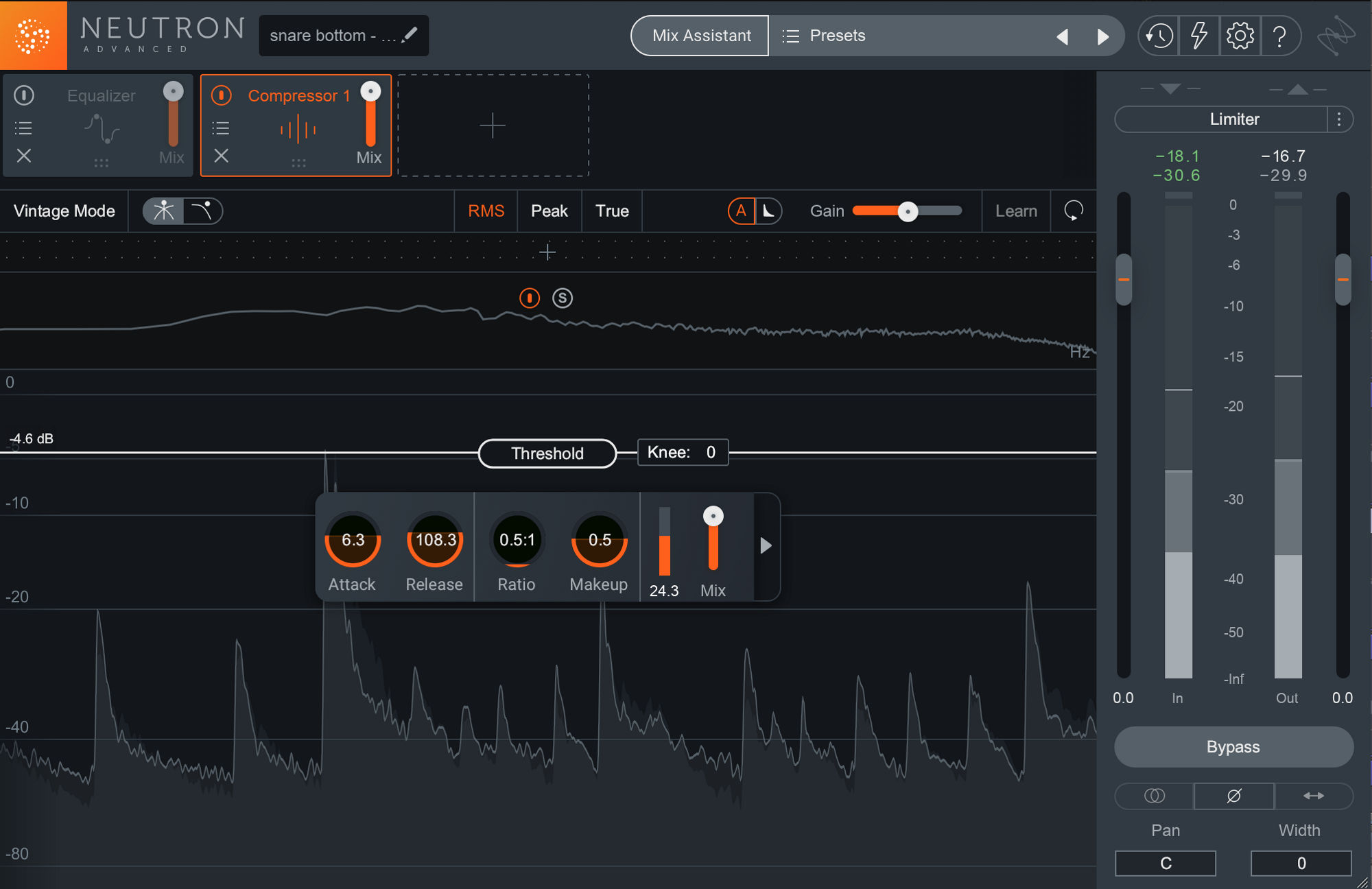 But first, a refresher:

What is upwards compression again?

Typical compression restricts your dynamic range, bringing everything above a threshold down in level. The amount of gain-reduction is usually dictated by the ratio parameter, and the timing of the effect is largely determined by attack and release controls.

This is a broad generalization; in the hardware world, some of these parameters might not exist on a given unit. Still, the operation as described is correct, and the result looks like this on a graph: Downwards compression, plotted out in PluginDoctor

Upwards compression also restricts the dynamic range. All the controls are roughly the same—threshold, ratio, attack, and release—but one crucial operation is reversed: anything below the threshold is brought up in level. Upwards compression plotted out on a graph in PluginDoctor

How to deploy upwards compression in Neutron

In Neutron’s compressor, you’ll see a ratio control. It defaults to 2:1, and from here, you can select other options—3:1 and higher for more gain reduction, for instance.

Go lower than 1:1, however, and you’ll be in the realms of upwards compression. As soon as you see a value such as 0.9:1, you are now raising everything below the threshold up in level, and everything above the threshold will proceed largely unaffected.

First of all, Neutron makes upwards compression extremely easy to implement. I’m going to go out on a limb here: not a lot of software even offer upwards compression. Indeed, when Bob Katz talks about the process in his seminal book, Mastering Audio, he quickly refers you to parallel compression, the effects of which can have a similar sound, as the quieter bits of the signal appear to sound raised in level.

Still, there is a difference in these two implementations. Here is a dynamic, crescendoing drum loop:

Here it is with parallel compression applied in Neutron:

And finally, this is what we get with upwards compression:

In the first instance, we hear more explosiveness on each transient; even the loudest hits are affected.

The upwards compressor seems to exhibit no changes to the loudest notes compared to bypass, but the quieter passages are brought up in level. You’ll also note some artifacts on the quietest hits—this can be an unwelcome side effect of upwards compression, because of how it pulls things up to the threshold.

All of this makes sense, especially if we chart out the differences on an analyzer.

Here’s parallel compression, of the sort utilized in the above drum loop: 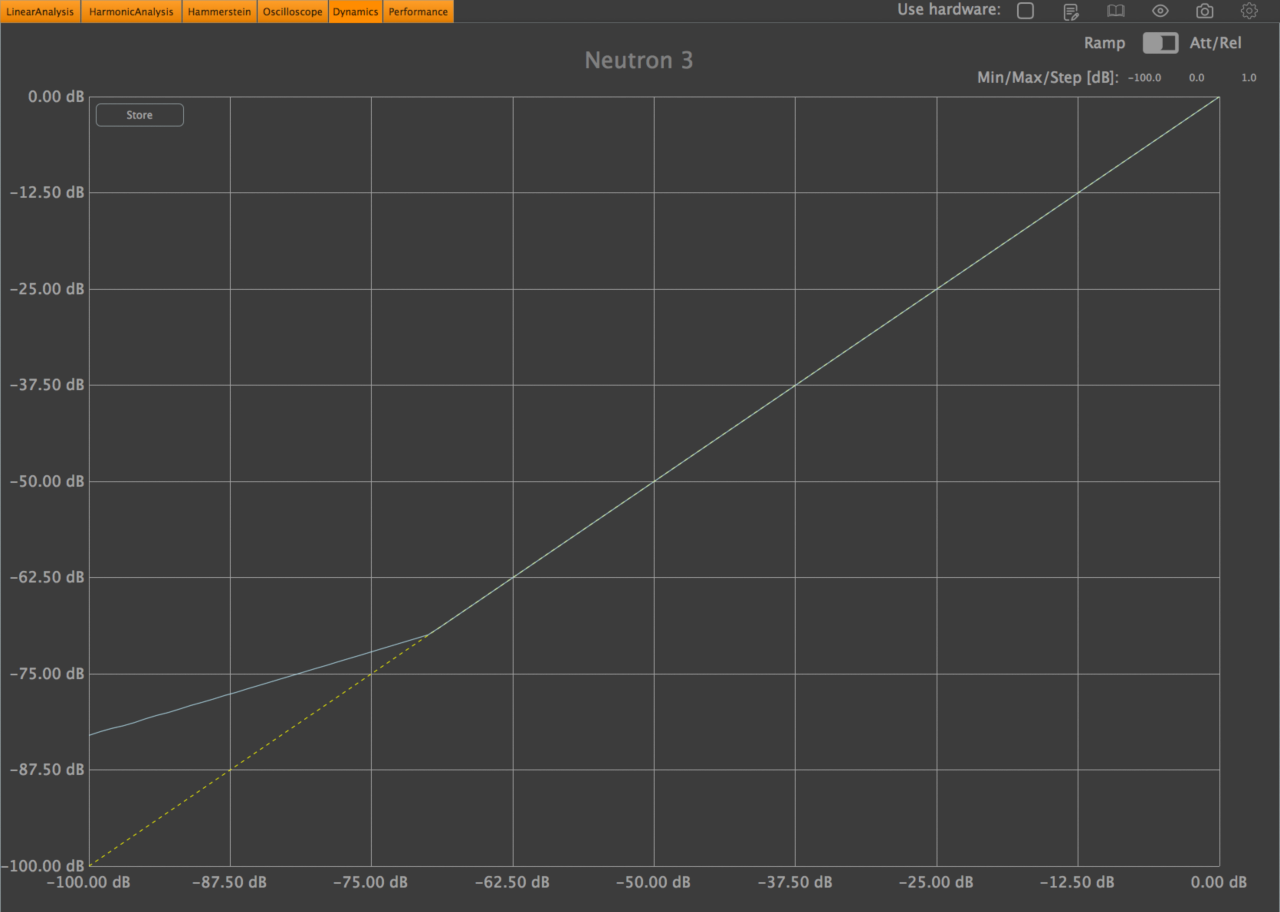 Neutron’s compressor in parallel exhibits a slight dip in level above the threshold; this dip is made so slight because of the parallel processing. In upwards compression, the signal is brought up below the threshold, and then it’s business as usual once the threshold is crossed.

Neutron further distinguishes itself by its different modes. You’ll note vintage and modern modes, and within each, the possibility of parallel and multiband implementation. All of these will change the character of the compression in a variety of ways, as shown in the graph below. 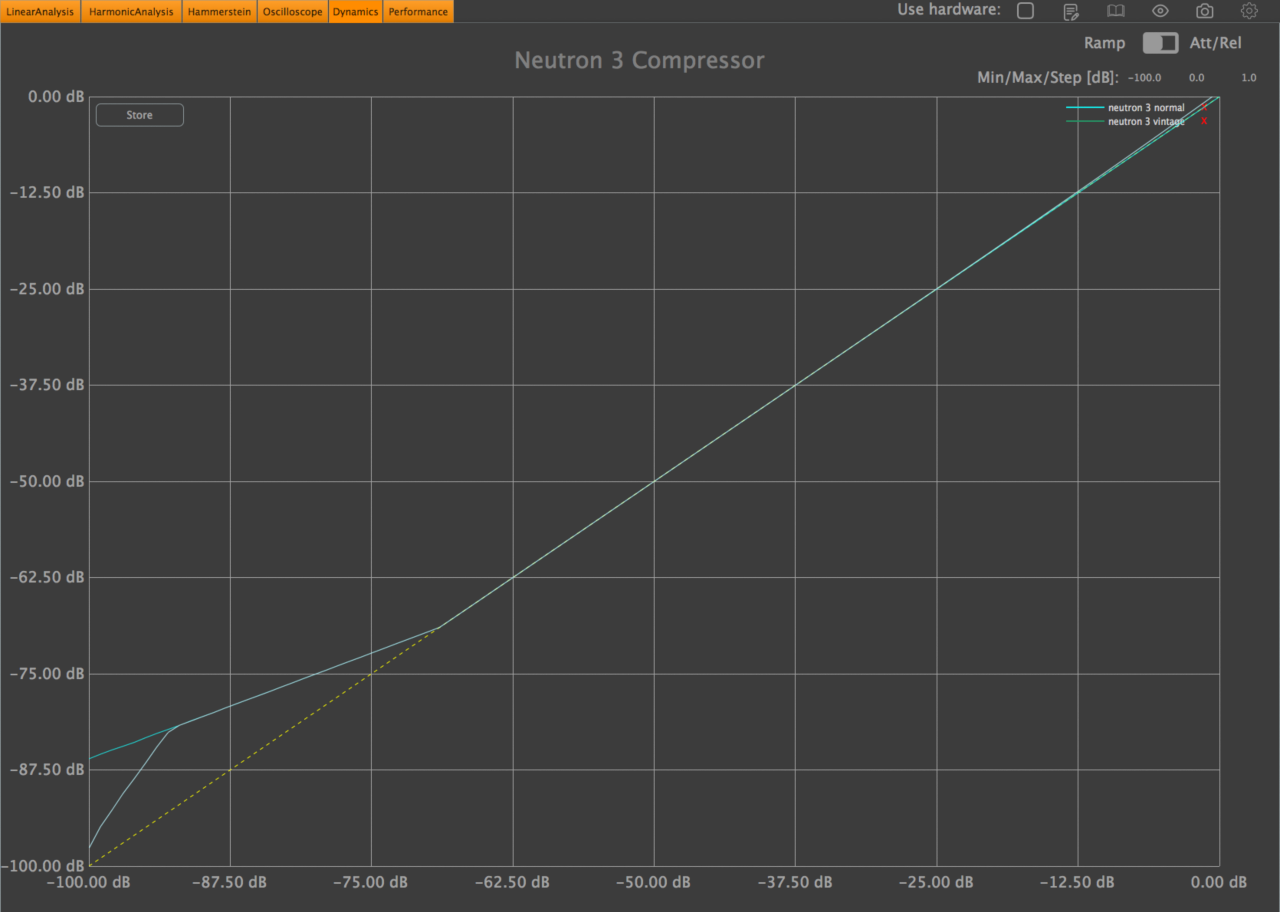 So what do we use this stuff on anyway?

1. Vocals that vary too much in dynamics

Sometimes you have a vocal too dynamic for the song. Usually, we make the louder stuff quiet—but what if the vocalist is appropriately loud most of the time, but too quiet on various words?

This is a case for upwards compression—use it to bring the quieter bits of the vocal up in level.

Observe a vocal in bypass:

We could bring up the quieter sections here. So let’s do that with the following settings: 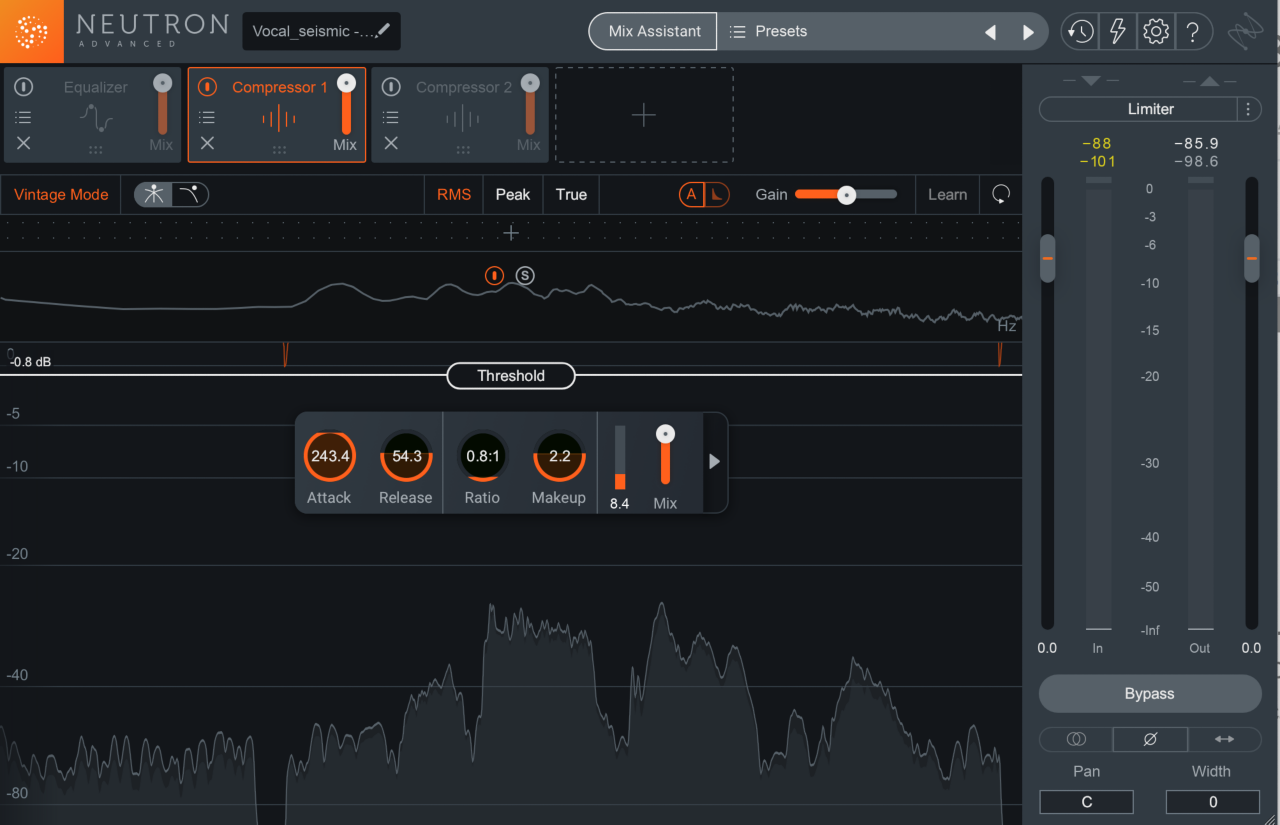 The results? Hear for yourself:

Often you receive a vocal that can be both too loud and too quiet at certain parts. Luckily, Neutron gives you two slots for compression. Run upwards first, then compress the louder material as you normally would.

Check out how the snare sounds in this loop:

Boy do I love those ghosts notes—the snare rolls situated between the loud hits. I love them so much I want to bring them up.

Here’re the top and bottom snare in solo, with no compression:

Take the snares out of solo, and the drumset now sounds like this:

3. Creating room mics where you have none

This is a bedeviling issue to any engineer working with acoustic drums: oftentimes, the percussion comes without a room mic, and you must reverse-engineer some sort of cohesive, atmospheric sound to help tie the drums together. You must go beyond reverb, for reverb alone sounds a little fake. Without this cohesive room sound, the drums can sound too dry or too thin.

In other articles, we’ve discussed tools to address the problem, such as harmonic distortion, amp-style distortion, transient shaping, and compression. Upwards compression gives us another way to tackle the problem. Let’s observe:

Here is a drum loop, with no room mics offered.

Let’s solo the overheads and get a closer listen.

We’re going to send these overheads to an aux, and, operating in parallel, we’ll create a sort of artificial room mic. Let’s start by putting some upwards compression on the overheads. 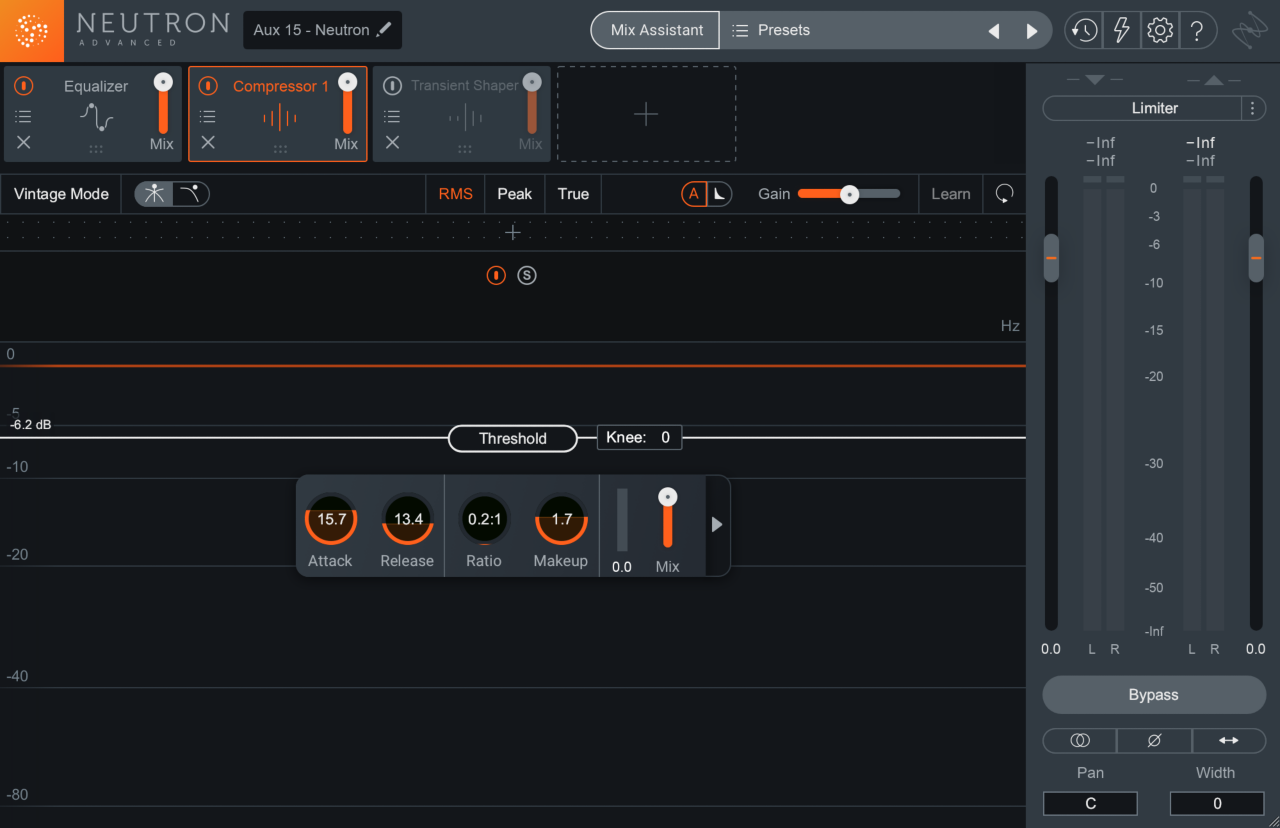 This sounds pretty good—but couldn’t we get something similar out of conventional compression?

Maybe not: in the following example, we can hear the difference between the two processes:

Indeed, we’ll get a specific flavor from upwards compression, one that’s absent when we smash the drums: the upwards compressor gives us more snap out of the kick and snare without sacrificing the ambience of the kit.

Let’s add to that atmosphere with a little reverb, generated by PhoenixVerb.

Fold this back into the mix, and it sounds like this:

We haven’t exaggerated the level of the fake room mic. Instead, we’ve implemented them roughly as they’d sound in context. When comparing this example to the original loop, listen to the tom fill, and you’ll hear the beef this fake room provides.

4. Creating atmosphere where previously there was none

Coupling upwards compression with other processes—reverb and transient shaping come to mind—allow us to create complicated atmosphere where there was none before.

Maybe you’ve gotten an acoustic piano recording, and you don’t want to alter the track itself. Maybe you have a synth lead that needs a little space around it.

In these cases, sending the instrument to a verb often feels a bit too pat, a bit unexciting and fake. If we add upwards compression to the sound before slapping on the reverb, we can twist its dynamics, alter its internal balance, and change what we’re marrying to the verb.

And here it is with a little reverb applied:

Feels a bit cheap, doesn’t it? A bit algorithmic?

Now, upwards compression on the piano does sound unnatural by itself:

But that’s not what I’m proposing. Instead, let’s add the same verb to this upwards-compressed piano.

And finally, let’s blend it back in with the original sound:

I feel the upwards compression, applied to the reverb, got the true feeling of this piano in space across in a more successful fashion. This is no polished grand piano in a symphony hall—this piano has some tactile, rough character to it! It decays at its own pace. With the first reverb, the piano decayed in a way that felt bereft of character. The latter verb, with its upwards compression, imparted some of the instrument’s original chutzpah to the space.

Let me be clear: upwards compression should not be a tool at the top of your grab-bag—it is an advanced operation, and to deploy it badly will ruin your mix. Upwards compression can cause artifacting and malign the dynamic integrity of any sound. It can raise the noise floor in imperfect recordings. In parallel, it can smear transients if used badly.

It’s also quite hard to marshal. You must spend time listening to how it changes the sound before you can judge how you, personally, would like to implement it.

So, nine times out of ten, it won’t be the right process for the job—making it truly valuable for the small percentage of time where it works. And when it works, you would do well not to underestimate its virtues, as it can provide a slight and subtle hand for whipping wayward sounds in shape.