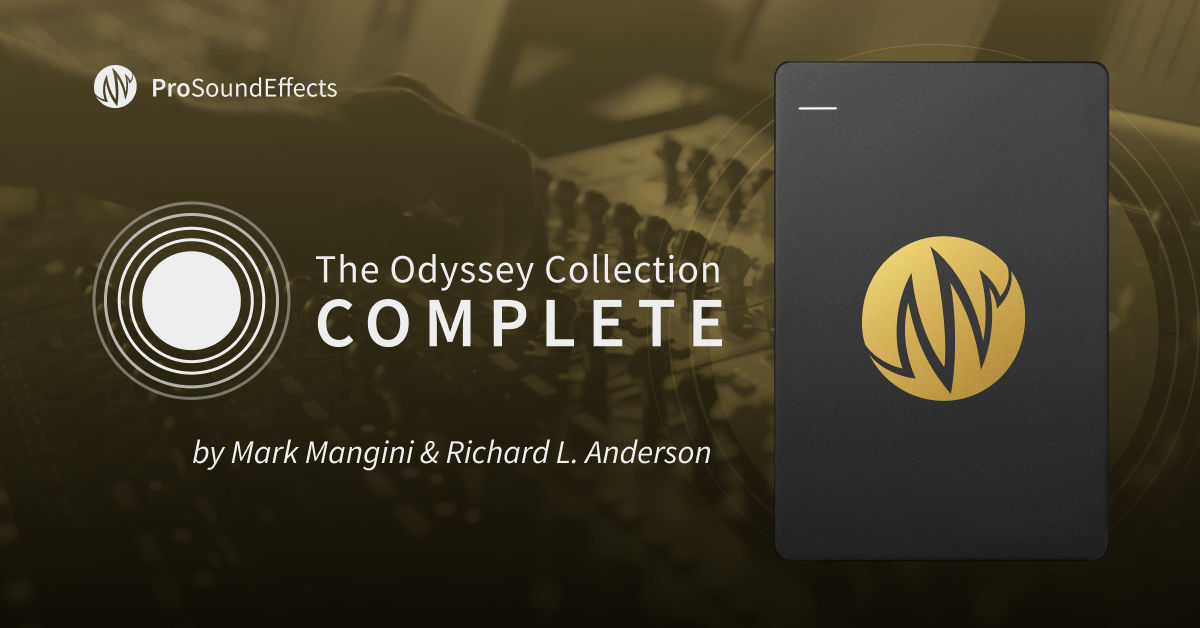 Over the last 35 years, two of the greatest sound editors, Mark Mangini and Richard L. Anderson, have built up a library of over 100,000 sounds that have been heard in dozens of feature films. This is The Odyssey Collection, packaged and restored by the talented team at Pro Sound Effects. It’s not your average sound effects library. It’s personal.

“Knowing where the sounds come from—a true Hollywood studio—makes it all the more engaging,” said Dan D’Errico, Library Operations Specialist at Pro Sound Effects. “To use these sounds is to work with the same tools as people who won Oscars. As a starting place, it already distinguishes you from others in the industry.”

In 2017, armed with the restorative powers of RX and a great respect for the craft, the Pro Sound Effects team broke ground on The Odyssey Collection’s massive restoration effort. They were tasked with putting the finishing touches for modern commercial use on thousands of sounds recorded on old and new formats.

“There are files of literal historic significance, so it was important to keep a light touch when editing the sounds,” says D’Errico. “The intention was not to make creative decisions on the files themselves, but rather to maintain the original integrity of the sounds.”

We spoke with D'Errico and Sound Editor Sebastian Henshaw about their restoration process, and how RX was used to revive this collection for modern commercial standards.

Spectral Repair was the team's most used module. “A lot of misc sounds like car drive-bys were a challenge,” says Henshaw. “All you want is the car passing by, but there might be bird chirps or other noises."

"It’s easy enough to go in with Spectral Repair and remove individual bird chirps. Use the ‘find similar’ function and then learn that pattern with the learn function,” explains Henshaw.

Spectral Repair makes it easier to identify, select and remove problem frequencies and unwanted sounds. It helps to determine what a waveform isn't telling you. Not only can you see noise in an effect’s spectrogram, but you can also often tell what type of noise it is—from clicks and pops to hum and buzz. That high pitched tone around 16 kHz that creeps up in a lot of recordings? With RX, you can see it’s there and remove it accurately.

Below is an example of how a pulsing sound effect from The Odyssey Collection looks in the spectrogram before and after a pass through RX. On the top is the original clip with two sounds spliced together. The first sound doesn't seem to need much work, but you can see in the second sound a lot of activity in the upper end of the spectrum.

On the bottom is the polished clip. Listen to the two clips and see if you can hear the difference Spectral Repair made on the sound.

When polishing audio transfers and older recordings suffering from quality degradation or digital errors, RX's De-click module is the answer.

“De-click was probably our second most-used module on a constant basis. Many files were mostly fine with just a little minimal clicking,” says Henshaw.

While De-click certainly identifies and removes clicks and pops from a signal automatically, it's important to consider the sensitivity setting of the module, as even a small amount can make a big difference. “I recommend playing with the sensitivity on the De-click and De-clip modules though having it set to 3 or 4 as a starting point worked well for us." says Henshaw.

Of course, some modules can be used for similar tasks. For example, Henshaw and the editing team had examples of clipping in their audio that would sound more natural to De-clip than De-click or the reverse.

Sometimes it can be a challenge to see problem areas in the spectrogram. Below is an example of a sucking explosion pre- and post RX. It's easy to see from the waveform that some of the harsher peaks in the signal have been evened out, and the clip has been shortened by about 10 seconds. Can you hear the differences in the clips below?

In audio restoration, sometimes the simplest task is the most critical. “It sounds obvious but it’s the most important aspect of the process," says D'Errico. "Fading was one of the last things done to a file, setting a very short fade on the head and tail so there would be no popping." To make this process more efficient, the team set a new shortcut in RX to automate some of the steps.

Some files were shortened significantly, condensed for the twenty-first century market, while others were split into multiple effects.

Below is a propeller plane effect pre- and post RX. The spectrogram view tells us a bit about what was done to this file. Not only was it shortened, but it also had a little bit of noise removed from the upper end of the right channel. Listen to the clips and see if you can notice a revived sense of clarity in the sound.

Optimize shortcuts to suit your workflow

A good goal when working with RX is to try and simplify your workflow as much as possible, while still ensuring quality and accuracy. "There's learning power in repetition," explains Henshaw "Over the course of this project, as we learned the subtle differences in modules our workflow became far more finessed."

Between Henshaw and the rest of the Pro Sound Effects team, there isn’t a single RX module left untouched in their quest to bring The Odyssey Collection to modern audiences. Let's be clear here, these aren’t always your run of the mill, easily solved issues. “We were able to clean sounds that were in the library for years and never thought could be released,” says Henshaw.

"In sound design, you need to be prepared for whatever comes your way. Anything that can be real and anything that can be make-believe as well.” explains Henshaw. “Baby sounds, live births, crying, laughing, all moments of human life are captured in this collection, but also fantastic synthetic designed sounds. Bizarre moments of dead pigs hit with objects to create the sound of human flesh, it’s all in there."

It's all in The Odyssey Collection: Complete; restored and refreshed with the powerful tools in RX 7.