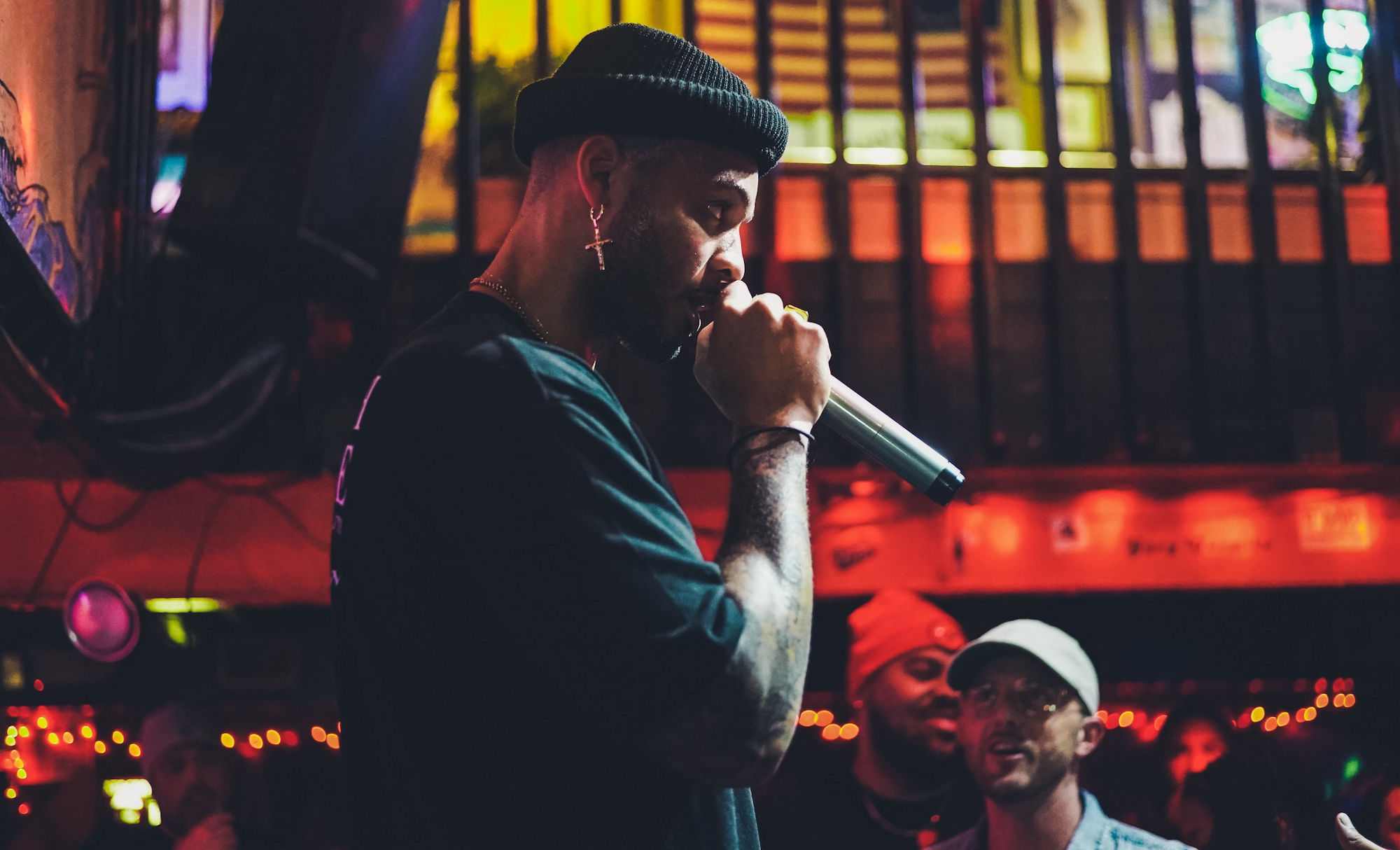 We often talk and think about vocal production in terms of the entire musical arc of a song. What about those brief, unexpected moments that surprise us and make the song memorable? A kind of aural wink at the listener, letting them know the song was made with their delight in mind. In this article, we’ll look at seven ways to produce short, but sweet vocal gestures in pop, hip-hop, and electronic music—what I like to call “magic vocal moments.”

For only a second or two, have all the instruments drop out in a mix with only the vocal remaining. This is a common, but nonetheless effective technique to drum up excitement before a new song section—we can hear this happen in Kelela’s “Frontline” as she transitions from verse to pre-chorus.

In “Okay” by Latrell James, this technique is used in a more jarring manner during the chorus. Every time James repeats the song title in the first part of the chorus, the backing track drops out. It's a clever move that quickly establishes a playful vibe and makes the song memorable.

Keeping one or two instruments in the mix with the vocals or greatly reducing the backing track for a section can be effective too.

To create a sense of contrast from the verse, as well as boost song intensity, chorus vocals are typically stacked in multiple layers for the duration. Doubling just a single word or short phrases here and there can have an interesting effect too.

In Erykah Badu’s “Appletree” her voice goes back and forth between a solo and harmonized version each line of the chorus. It's an extra pattern for the listener to latch onto that feels organic and natural. I don’t think this section would have been as powerful if it were harmonized the whole way through.

This technique can also be heard in Frank Ocean’s “Provider.” The last word in the first line of the song is doubled with a robotic-sounding version that doesn’t repeat again. This plays with the expectations of listeners, who will now pay close attention for the effect to come back.

To easily achieve vocal doubles in your DAW, try our free Vocal Doubler plug-in. For even more creative control, use the Harmony module in Nectar 3 to generate up to eight in-key vocal accompaniments that follow a lead.

If you want to spotlight part of a vocal melody, have an instrument or multiple instruments play the same melodic line. This is a common technique in jazz that also finds its way into pop, electronic, and hip-hop. You can hear this happening right at the start of “Lullaby of Birdland” by Sarah Vaughan as her vocal melody is matched by horns and a bassline.

Annette Peacock takes a more experimental method of approach in her song “Pony.” At several points, she uses her own voice to modulate a resonant filter on a Moog, creating an interesting blend between human and instrument.

This technique can also be used to emphasize certain words or phrases that are important to the emotion of the song.

While ad-libs have been part of hip-hop since the very start, their recent popularity has made them as, if not more important than the lead vocals they support. Drawing on a wide range of inspiration, artists use ad-libs as their sonic signature, sometimes taking the form a shout out, bark, scream, or grunt.

Ad-libs are often effective in a call-and-response routine. This can be heard in music from Quasimoto, the high-pitched alter ego of producer-rapper Madlib. On “Planned Attack,” for example, Quasimoto asks questions and calls out Madlib to respond, who does in his normal voice. It makes for a unique interaction that’s both fun and strange at the same time.

Formants are the natural resonances produced by a vocal tract that give character to a voice. The way we move our vocal tract, mouth, and jaw when we speak shapes formants to differentiate vowels and other classes of speech. Vocal plug-ins like Nectar 3 and VocalSynth 2 allow artificial shaping of formants to alter vocal timbre. Moving formants downward gives the impression of a deeper voice and moving formants upward produces a smaller, nasal sound.

Formant shifting sounds similar to pitch shifting, but the principles behind the two effects are different. The former affects vocal colour, whereas the latter changes what notes are being sung. Listen to the difference below, starting with formant-shifting.

For a more practical application, listen to the bridge in “Diane Young” by Vampire Weekend. The vocal formants are automated to move from low to high, and within a matter of seconds, we hear a voice that transforms from raspy to chipmunk to alien and back again. While bordering on cartoonish, it matches the upbeat vibe of the song and keeps energy high. Formant-shifting is a good choice for producers who want to simulate multiple voices from a single performance, or introduce pitched effects that do not clash with the backing track.

Incorporating sung or spoken vocal samples alongside performed lyrics has a striking effect. In Bon Iver’s “22 (OVER S∞∞N)” he weaves gospel vocal samples into lyrics as if they are a second vocalist providing backgrounds. It's an unexpected, but welcome move that provides a sense of contrast in the lead.

Travis Scott’s “Sicko Mode” is filled with vocal intricacies. At one point he raps “when we pull up gimme the loot,” a reference to the Notorious B.I.G.’s song “Gimme the Loot,” then brings in a sample of Biggie shouting his song title. It’s a brief, but meaningful moment that references hip-hop history and charms fans at the same time. Granted, it's easier to sample a famous song if you’re Travis Scott, but you get the idea.

Vocal production has become a playground for creative engineers and artists eager to make their music stand out. Some of the techniques they rely on are genre-specific, and others come from a desire to be new. With these magic vocal moments as a starting point, you should be able to add something unexpected and special to the quality of your vocal mixes. Adding your own techniques in, as well as coming up with hybrid approaches will benefit your songs even further.