Building off of some of the ideas we explored in "9 Songs that Changed the Way We Produce Vocals," in this post we demonstrate how vocals can become instruments in their own right. Think of this as a primer for reimagining what your vocals can be.

When we think of voices used as expressive instruments, bands and artists like Sigur Ros, Laurie Anderson (particularly the song “O Superman”), Björk, Gabi, and others come to mind. Below, we use VocalSynth 2 as a vehicle to transform various vocals into new instruments in their own right, full of various sounds, textures, and rhythms.

On “Beautiful People,” a track off the 2016 album Under the Sun by Mark Pritchard (of pioneering ambient techno duo Global Communication), Radiohead’s Thom Yorke handles the vocals. While Yorke sings in his typically emotive way, with various tonalities and phrasings, Pritchard—ever the experimenter—warps the singer’s vocals until they become otherworldly. The warping is subtle, like vocals appearing to a dreamer inside a dream, or an alien mimicking human speech and song.

On our track, we go for that alien quality. But instead of keeping the vocals pretty subtle, we embellish them quite a bit more. The vocal sample here is a long and reverb-drenched female “ahhhhhh.” We double-tracked the sample, with one being the original and the other being the vocal run through VocalSynth 2’s Biovox. Because of the original sample, there is a human element to the vocals, but it also sounds distant and strange because the Biovox lends the recording a synthetic air. Above, the Polyvox module is set to a low pitch and shifted to the C# Major scale

In the Biovox module, we selected the Bass Grater preset. To that, we added Polyvox, which we set to a low pitch and shifted to C# Major. We also threw in some chorus and delay to add to the overall effect.

Chopping vocal samples up and using them as percussive elements is nothing new. But in this creative spirit, we chopped, sliced, and rearranged the vocal below, then ran it through VocalSynth 2. We did some pretty radical signal processing so that the vocals become really experimental percussive elements. 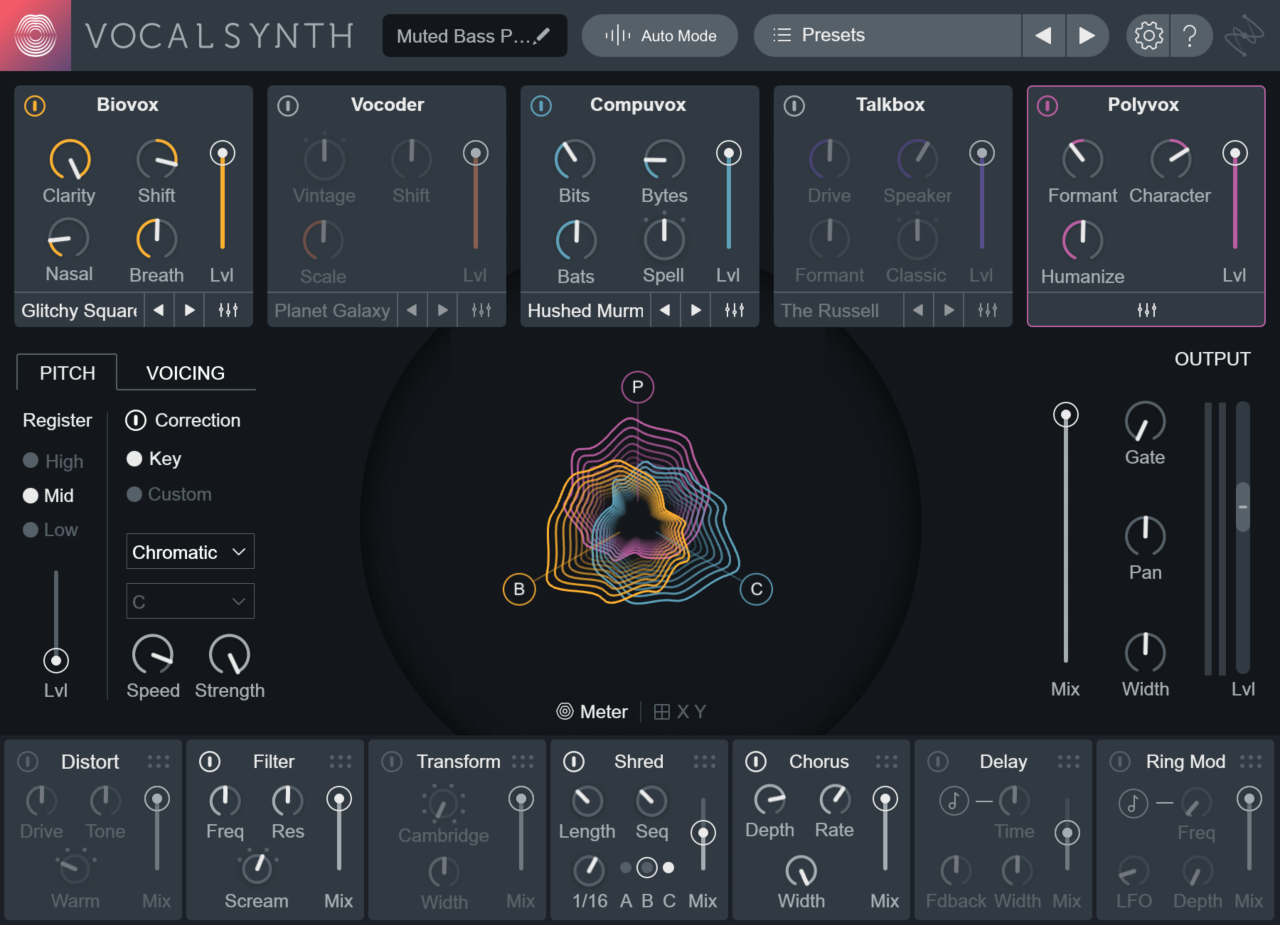 The Biovox module set to the Glitchy Squares preset

The clip below comprises two samples: the first, a male vocal that says “Yeah,” and the second a female vocal that says “Back.” We randomly arranged them in Ableton Live, then used various VocalSynth 2 modules and effects to create a really glitchy techno beat, like a primitive version of Aphex Twin or Venetian Snares, if you want to think of it that way.

First, we set the Biovox module to the Glitchy Squares preset, which degraded the sequence. We then set Compuvox to Hushed Murmur, a preset that gives the lo-fi quality a more computerized edge. Then we engaged Polyvox to formant shift the vocals down. But we didn’t stop there. We also filtered the sequence in the effects section, added some chorus, and then created random variations by playing with the Shred effect, which allowed us to randomly repeat various notes to add more glitch to the mix.

This experiment ditches the idea of a vocal being primarily a melodic, harmonic, or percussive sound generator, recasting it instead as pure tonality and texture. To do this, we started with a high-pitched opera vocal sample that already had a touch of reverb on it. We also added Ableton’s Concern Hall reverb to the mix. Granted, most people don’t have operatic vocal talent, but we wanted to turn one extreme into another for the sake of experimentation.

For this clip, we wanted our opera vocal sample to drone like something from 2001: A Space Odyssey, where composer György Ligeti’s pieces turn opera vocals into atonal drones. Now, on our sample, we didn’t layer vocals the way Ligeti did; but a somewhat similar, albeit more minimal effect is achieved by processing our sample with VocalSynth 2. 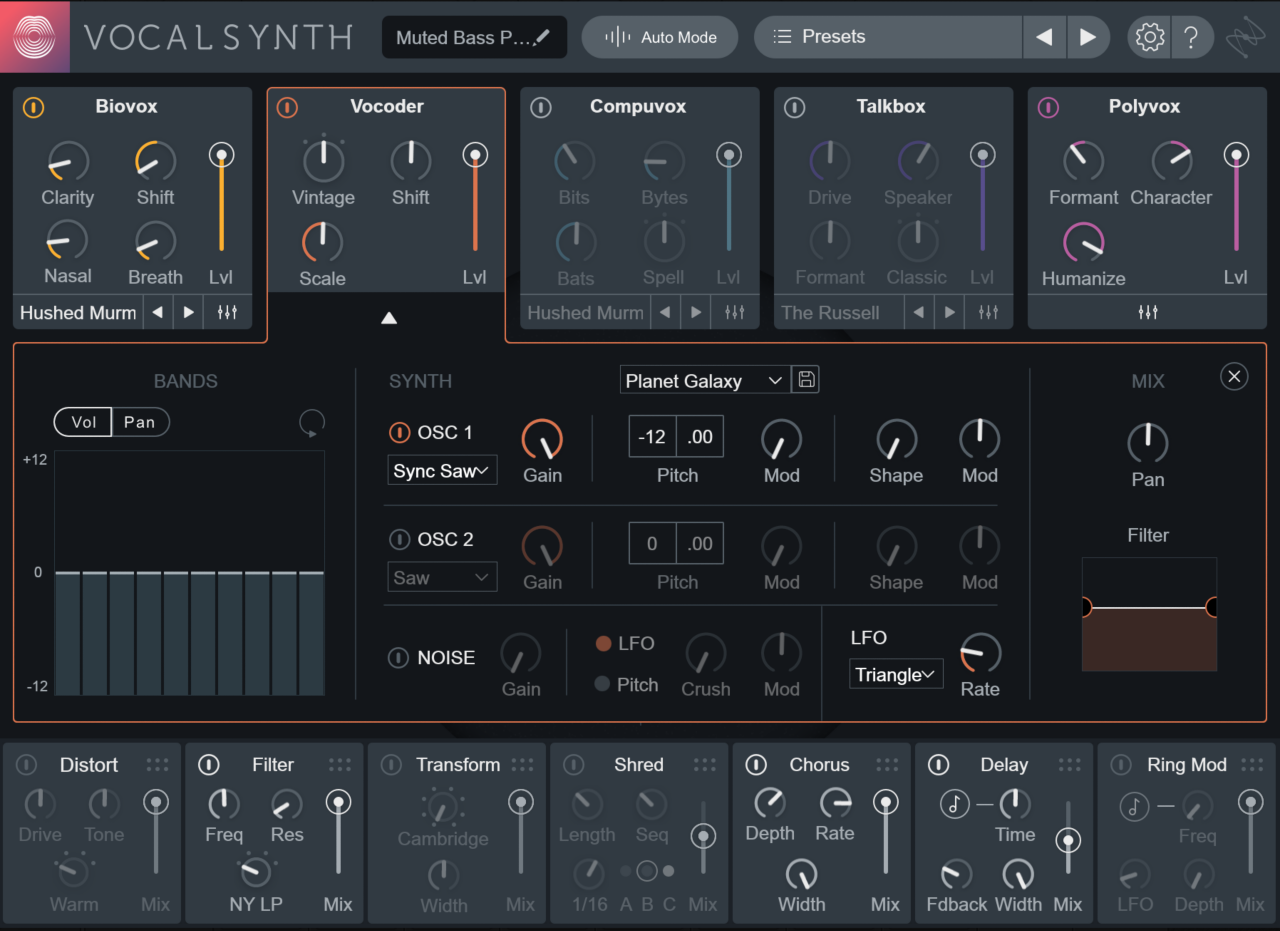 The Vocoder module set to the Planet Galaxy preset

First, we set the Biovox module to the Hushed Murmur preset, while setting Clarity to 17, Shift to -77, Nasal to 19, and Breath to 14. Next, we switched on the Vocoder module and set it to the Planet Galaxy preset. To finish it off, we engaged the Polyvox module, setting the Formant to -5, Character to -31, and Humanize to 86. Taken together, these three modules really give the sample it’s spacy, quasi-Ligeti sound.