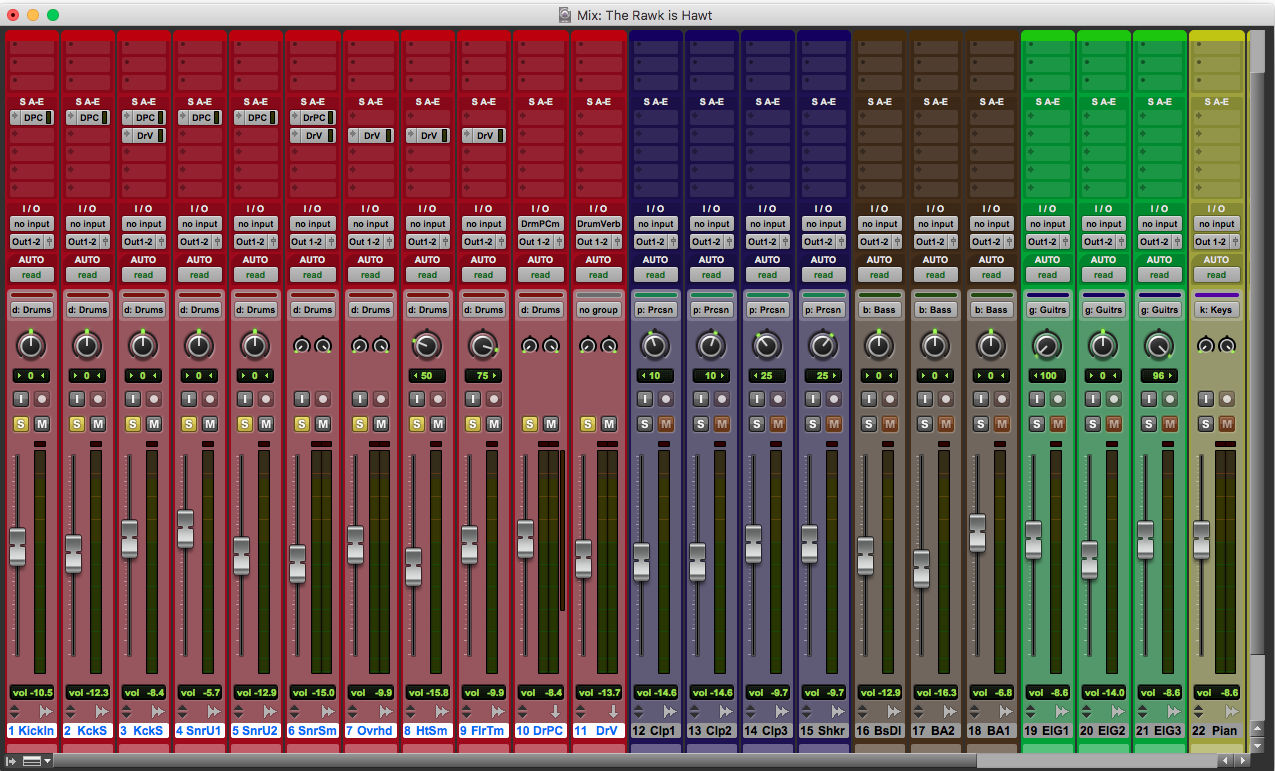 Audio files are essential to modern audio production and are relied upon for successful collaboration, tracking, editing, mixing, remixing, and mastering. However, lack of proper file preparation or confusion about what files to use will net a lot of frustration and wasted time, money, and progress. Under the umbrella of audio files are two commonly used and confused kinds—multitracks and stems.

Sure, both are audio files, but what’s the difference?

Some people use “stems” and “multitracks” as interchangeable terms. Though they are related, they're not the same. Understanding the differences prevents mixups when it comes to requesting and sending files.

Multitracks are the recorded separate, individual elements of an audio production. Some may be mono, while others are stereo. They may have been recorded from microphones or direct inputs, programmed in a sequencer, or arranged in a sampler. In many cases, dynamics processors such as compressors and time-based effects such as delay and reverb are excluded to allow flexibility for the mixing engineer. The image below shows a folder of multitracks. Stems are stereo recordings sourced from mixes of multiple individual tracks. For example, a drum stem will typically be a stereo audio file that sounds like all of the drum tracks mixed together. In most cases, additional processing such as equalization, compression, and time-based effects is included to ensure that the sound achieved by the mixing engineer is committed. The image below shows a folder of stems generated from a mix of the multitrack files displayed in the previous image.

Stems offer unique advantages over multitracks for certain applications, but they also present limitations when compared to multitracks. Consider these pros and cons of stems when deciding if they should be created and used.

Setting up an overdubbing session will be faster with four stems versus 40 multitracks. Fewer files, fewer hassles (usually).

Stems, you say? You nailed it. Since the Vermont artist will not be editing or mixing the tracks, he/she doesn’t need every separate element of the production. However, if the Vermont vocalist wants to sing along with quieter drums and louder instruments (for pitch reference), that is easily accomplished with stems. Plus, even if the computer used by the Count of Montpelier is weak in comparison to the strong SoCal supercomputer, it would surely be more likely to handle four audio files than forty of them. As a result, stems offer reliable simplicity when transferring between collaborators and engineers, regardless of which DAW is used.

If someone sends you ten stems, they will be “easier” to mix than 100 multitracks, but will also be quite limiting. The stems may already be affected with EQ and reverb and adjusted to the preferred levels from the previous session. Since that work was taken care of, it leaves less work for the mix engineer. Less work; that’s exactly what the mixing engineer wants, right?

Example Scenario #1: After stems are sent to a mixing engineer, the artist requests to have the drum overheads panned closer together, the floor tom panned further right, and the snare bottom turned down several smidgens. But if the mixer was given a stereo drum stem rather than individual drum files, the requests cannot be accomplished. There’s no way to tweak those individual elements in a stereo audio file.

Example Scenario #2: A year after the release of a song, “Shine Shiny Sunshine Shine,” the artist gets a licensing deal to have the song featured in a car commercial, but the production company wants a mix with the drums down and vocals up. If stems had been created at the time of the original mix, it would be simple and painless to pull them up and make the new mix. It wouldn’t matter if the mix engineer had a completely different system; any DAW that could read the stem audio files would be sufficient!

Ease of use for remixers

Remixes are fiercely common and popular. Last year, I heard a track called “Horns” by Bryce Fox. A few weeks ago, I decided to look up more of his material. My findings included a few miscellaneous tracks that each had four remixes! Electronic musicians, beatmakers, and music producers frequently want to take elements of a song they like, but use a different beat, tempo, and more to create a new interpretation of the song.

Example Scenario: A week after the release of a certain lyrically complex track—we’ll call it, “Yeah Yeah Yeah, Whoa Whoa Yeah”—an EDM artist wants to do a remix of it with his/her own spin on the instrumentation. Should the original artist send stems or multitracks?

Stems! The EDM artist wouldn’t have to create a mix from scratch, but just load up the stems and start chopping, cutting, and warping. If the remixer uses a software such as Serato DJ, Traktor, or Live, a handful of stems can easily be integrated and manipulated.

A mastering engineer will usually be dealing with the final stereo mix instead of multitracks or stems. However, some scenarios such as needing more kick, less bass guitar, and warmer lead and backing vocals (all in the same mix) may be easier for the mastering engineer to tackle if he/she has stems. Don’t assume that a mastering engineer wants stems. The mastering engineer may have a preferred stereo signal chain utilizing stereo analog outboard gear and could be slowed down by having to deal with stems.

So, communicate before sending files to a mastering engineer. If you will be mastering someone else’s material, make your preference known.

How to Deliver Stems

Each DAW handles the creation of stems differently. The process often involves features such as track bouncing and/or exporting. Regardless of your DAW’s unique capabilities (some offer faster stemming methods than others), there is a near universal way to make your stems. Prior to detailing that process, I’d like to review a few important suggestions.

Use the same file length for all stems

If all stems start and end at the same points, lining them up in a different session or DAW will be effortless. Receiving stems that don’t line up together yields a massive headache because you have to try to figure out where each stem should start. Also, be sure to include additional time at the session end to fully capture reverb and delay tails that may extend beyond the last audio region.

Include effects for each stem

To ensure that the stems will sound just like the current mix of tracks, the effects tracks such as reverb returns, echo tracks, and pitch and reverse SFX must be used. So, if you have eight dry drum tracks and one drum reverb track, don’t forget that reverb!

Create at least four stems—drums, bass, other instruments, and vocals

Using this as a minimum standard allows future users of the stems to have separate control over the most essential groups of sources. Based upon communication with your client, be prepared to create (aka “print”) additional stems for improved flexibility. You may end up with stems for drums, percussion, bass, electric guitars, acoustic guitars, piano and keyboards, synths, lead vocals, doubled vocals, and background vocals, or even more!

Document the tempo, meter, bit depth, sample rate, and file type of the stems. This information will be greatly appreciated by anyone receiving the files as it makes configuring their DAW much easier.

The following steps show how to create stems and can be used even in very basic DAWs.

Select your playback range from the session start to the session end. Don’t forget to include extra time at the end for effects tails (if applicable), as shown in the image below.

Solo the tracks that are to be included in the stem. Since only the soloed tracks will be audible, this guarantees that the stem will not contain any other content. In the image below, the dry drums, parallel compression track, and reverb return are soloed. At this point, use the same function you would to export the full mix of your song. Your DAW may call it Mixdown, Bounce, Export, or even Share. Only the soloed tracks will be audible and included in this process. The images below show the corresponding menu selections in Pro Tools and Logic Pro.

Repeat steps 1-3 for each stem source (i.e. bass, other instruments, and vocals).

After finishing the last stem, it’s important to verify that the stems were properly printed. Import them into a new session along with the full stereo mix file. Then compare the mix of stems to the stereo mix.

Some people will do a null test by inverting the polarity of the stereo mix file and playing it with the stems to see if it nulls or cancels out (combining two identical audio signals in opposite polarity will result in complete cancellation). Although that is a scientifically approved practice, there are situations in which the files won’t null. Many modulation plug-ins utilize pitch and level changes that cycle independent of the DAW timeline and will not be identical from pass to pass of playback. Use of such plug-ins will interfere with a successful null test. The bottom line is that you need to make sure that when the stems are combined, the resulting stereo mix isn’t different from the normal stereo mix.

Collect the tempo, meter, bit depth, sample rate, and file type of the stems. Enter it into a text document, then save it as a PDF, which is a document format that can be opened on most computers and mobile devices. The image below shows the essential session and file information in a PDF.

Depending on how your bounced/exported files were initially named, you may want to clean up the names and folder contents. Ideally, all the stems will be clearly labeled in a folder with the file information PDF (as shown in the next image).

In light of this reality, mix engineers who routinely print stems with stereo bus compression employ the following scheme:

As displayed in the image below, this configuration allows the full mix (not audible) to trigger the stereo bus compression even when recording stems.

Due to the usefulness of stems in the various stages of audio production, printing them is becoming standard procedure for many songwriters, producers, and mix engineers. Though doing it involves a little extra work, it can spare you from hassle later on. Open a session, then make a few practice stems. Once you’ve got the flow of operations, the process is pretty easy!