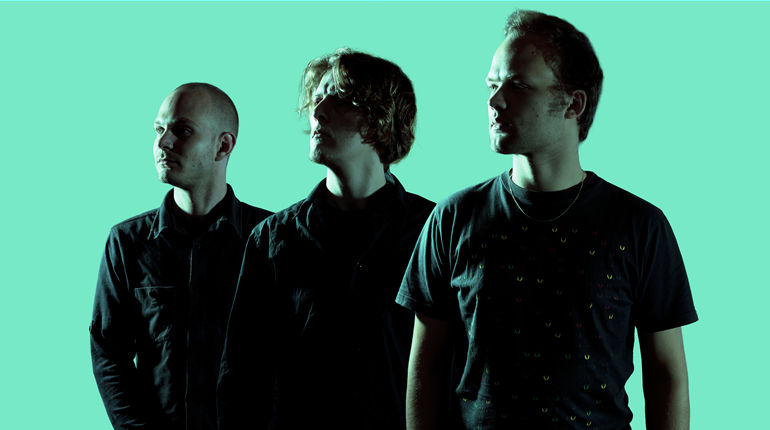 "What we do a lot is make drums," Martijn van Sonderen says.

"Very basic—and then add a bit of character." A bit of character might be a bit of an understatement for this EDM powerhouse. Known for their extraordinarily innovative production, spanning a wide variety of electronic music genres, this three-man drum and bass group has exploded in the last decade by introducing some of the most visceral, expressive music in the EDM world. In hopes of breaking the code as to what makes Noisia sound like Noisia, we boarded their tour bus at the Identity Festival Tour to ask precisely that. So what’s their big secret?—There isn’t one. "We fuck around until it sounds like a Noisia record."

Deemed 'the producer’s producers,' Noisia is highly sought after for collaborations and remixes across the industry. Skrillex, deadmau5, KoЯn, and Labrinth have all enlisted remixes by the trio. With all the talent to pick from, you may wonder how they go about choosing collaborators. "I don’t think there’s a general rule," Thijs de Vlieger says. "It’s really respect for skill, but also friendships." Artistic integrity is also primary concern for Noisia. Sometimes working with other artists allows for too much flexibility and the production starts to migrate in a direction inconsistent with their core values. "We don’t want to give up too much of our own artistic integrity working with other people. There’s a lot of people whose production skills we respect, but wouldn’t necessarily want to do a collab with," Thijs explains. When asked about their favorite collaborations, both Martijn and Thijs jump at the chance to tout Foreign Beggars: "It’s always a party when they come over," Martijn offers. "We can do tunes with them that we never would have made ourselves."

Surprisingly, working with other artists doesn’t change their production process much—just the speed of the work and the number of musicians involved. "It’s just that there’s four or five people in a room as opposed to three, but they are usually the fastest because you have to finish it before they leave," says Thijs. "It usually takes two to three days. A Noisia track is a couple of days just for the first sort of sketch and then it can take months." When they have the luxury of time, it’s not uncommon to let tracks sit for some time before completion. "We let time decide whether it should be finished." Thijs estimates that a mere five percent or less of Noisia music sees daylight. "We can play music that we make for hours but we’ll never finish it for a project. It’s weird because those tracks that are finished, they feel further away from me because they’re finished. There was this promotion around it and all these other tracks we haven’t finished are like our little babies," he says.

Noisia has taken quite the ride from sharing a small apartment in the Netherlands to building three individual top-of-the-line studio facilities, one for each member. In a constant production vortex of three, they’ve honed their craft and the new spaces are a much welcomed change after years of producing and creating in close quarters. Altering their workflow significantly, Martijn thinks that good things are in store for their move to separate creative spaces. "Usually I’d say that one person starts something and two or three of us finish it. But when we get the new studios, you’ll probably get more tunes by one of us." Alternatively, Thijs argues. "Or we might start sending projects around and let someone else have a go—a new era," he says excitedly. Time will tell exactly how much the music will change but in the meantime, third member Nik Roos works hard in the Netherlands on new Noisia material while Thijs and Martijn tour.

"Most people will be interested in our stuff for the bass. There, Trash is essential to our sound—the dirtiness, but also the subtle dirtiness"

For Noisia, writing a tune is really about short spurts of material and taking one giant leap away from predictable. Clichés, common sounds, and expected conventions are off the table. "A perfect tune is really, in our vision, almost never a full-on tune with an intro, a drop, and whatnot…that’s the only thing we’re really criticized on. There are a lot of short little skits…they were never intended to be five-minute songs—just a minute and a half." Though the ‘Noisia sound’ is commonly associated with that gritty, dirty sound, it’s not always the case in production. A number of their compositions are more subdued, less aggressive, but still considered Noisia tunes. "It’s something that we just feel." And as for the nuts and bolts of sound creation? Not only do they use real recorded drum samples on their tracks-- they also get real resourceful, perhaps a little too resourceful... "We actually have a track that has a samples of Thijs rubbing cardboard against my ass," Martijn muses. Whatever works.

Using Cubase as a workspace, Noisia relies heavily on creative distortion effects to give them that characteristic grittiness without going overboard. When shaping synth or bass sounds, Noisia leans on Trash for its diversity, control and consistency. "We use it in every project," Martijn says. "It’s almost every bass sound. The great thing about Trash is that it doesn’t fuck with the stereo image. We always use multiband, especially with the Clip Control [algorithm]. Doing that really adds some sub to it." Using Trash has its benefits in the low end, providing drier distortions on bass tracks for transparency and allowing for wet/dry mix control.

Trash’s convolution and box modeling is used on Noisia synths and bass sounds as well in certain cases to hone in on preferred characteristic sounds. "Most people will be interested in our stuff for the bass. There, Trash is essential to our sound—the dirtiness, but also the subtle dirtiness," Martijn explains. Using a mix of homegrown samples and effects, Noisia adds layers of drum tracks and distortion as if painting a canvas of percussive suggestion. "A real good trick is if we’re doing drum tracks, we’ll put the kick, snare, hihat, and tom each in a group. Then there’s our overhead mics. You can really distort them and make them loud so you get a feeling of the room. It’s really cool and if you want something to be a bit wider, but not coarse, you can just use the band separator a bit."

Bought Trash 2 and don’t sound like Noisia yet? Not to worry, when it comes to the coveted "Noisia signature sound," Thijs is very matter of fact: "The biggest secret [of our sound] – is that there is no secret. There’s no particular plugin, or setting, or process, or whatever that you can walk through and get an amazing sound or whatever. You just have to do it over and over again and fuck with the sound to get it right."