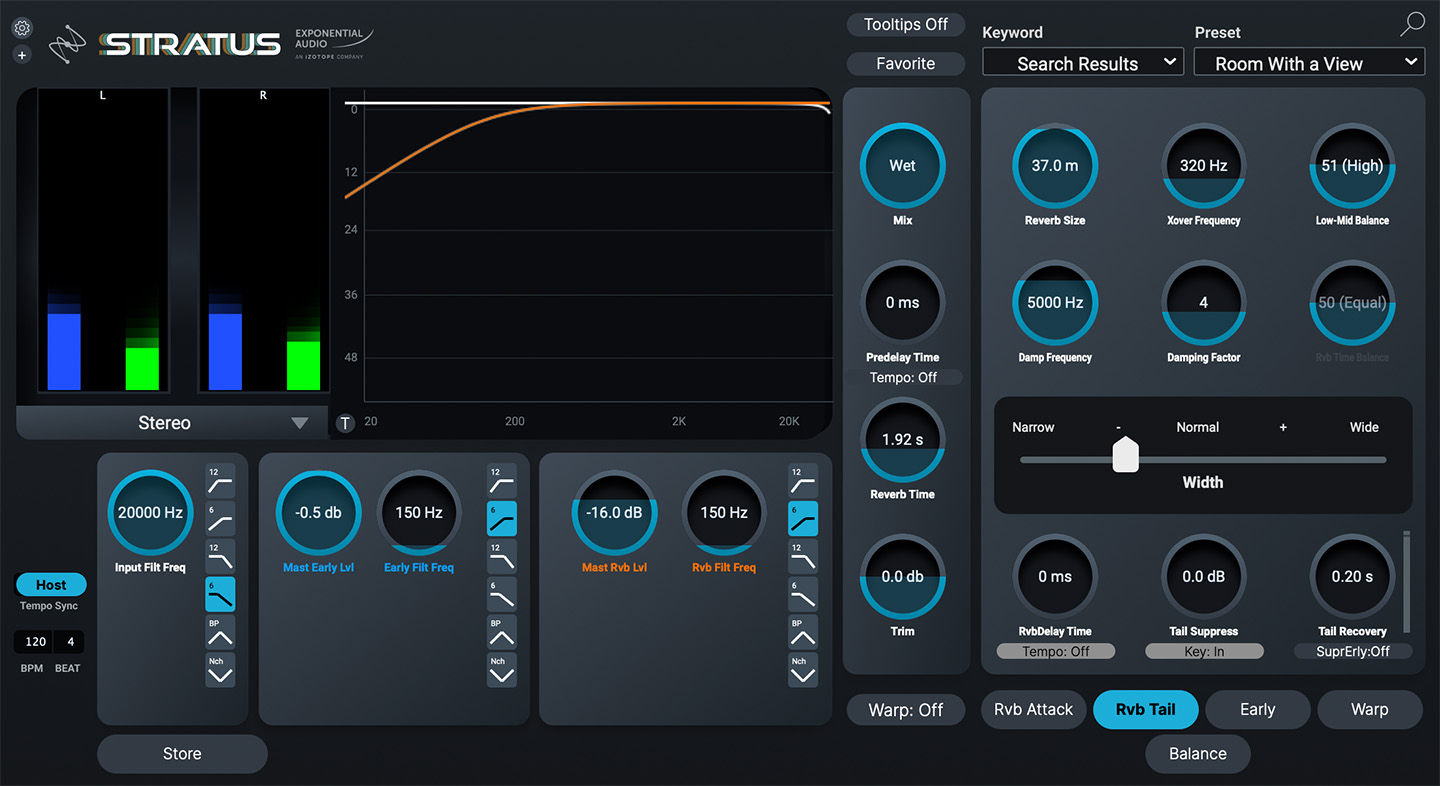 Reverb plug-ins can be intimidating beasts when you’re just starting out. So many controls—and what do they all do?! Some of us are too proud to go preset diving. But I say forsake the pride: presets make for great teaching tools, as they can help you examine how a specific reverb works.

In this article, we’ll be using Exponential Audio reverbs. We’ll be looking at the verbs in a post-production context by using them on dialogue. Our hope is simple: to teach you how to use a reverb plug-in by putting presets through their paces.

We’ll be using one line of dialogue for this purpose. Here’s what it sounds like, totally dry:

1. Put a character in a New York City kitchen

Today we'll be looking at STRATUS, which offers us a whole section of Post and ADR presets. In this category you’ll find one called “Cookin Kitchen.” Here’s what it sounds like on a line dialogue.

What do you notice? A relatively short reverb with a high-midrange emphasis. It could easily feel like a galley kitchen in New York City, with narrow walls and some high-midrange reflections. So, let’s look at the preset, and see what is contributing to the sound. 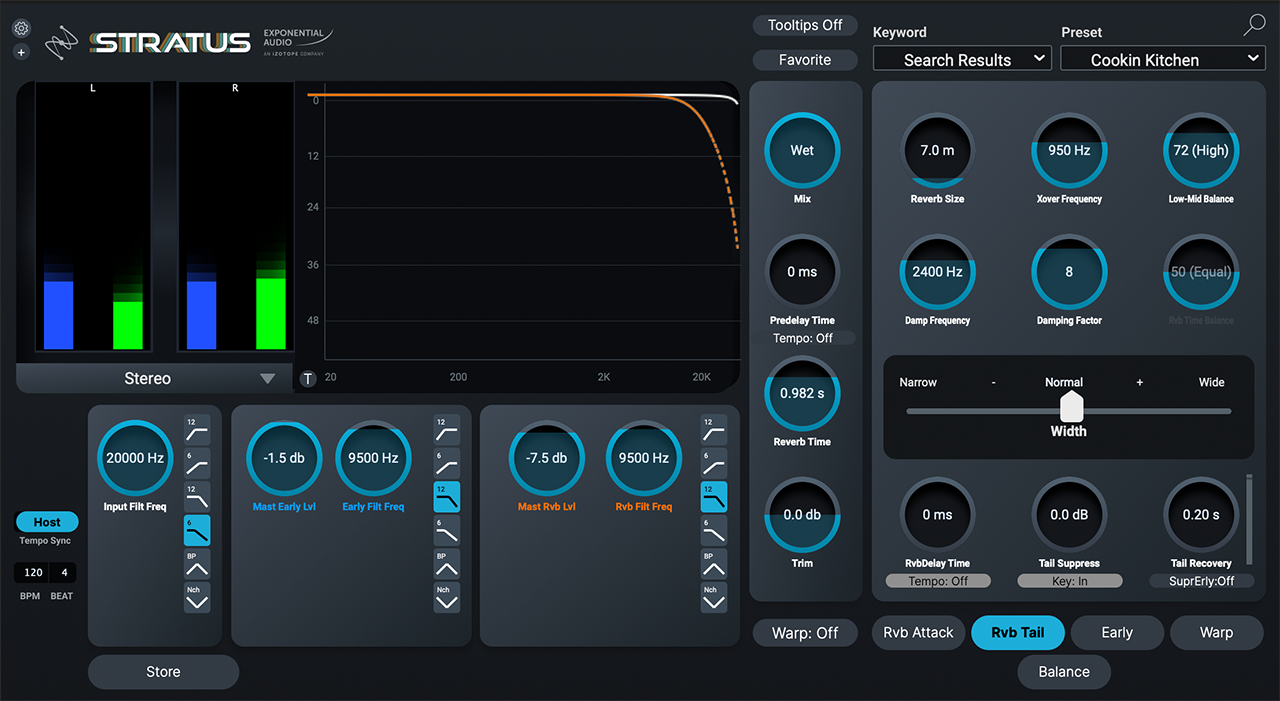 First of all, we see that the level of early reflections is higher than the tail of the reverb. This is important for giving us the feel of a smaller space. We also notice the room size—seven meters—which definitely has something to do with the feel. If the room were larger, it wouldn’t feel so tight. Even ten feet up from seven would significantly change the vibe.

But really, the character of this room is coming from its early reflections, so let’s show you that tab. 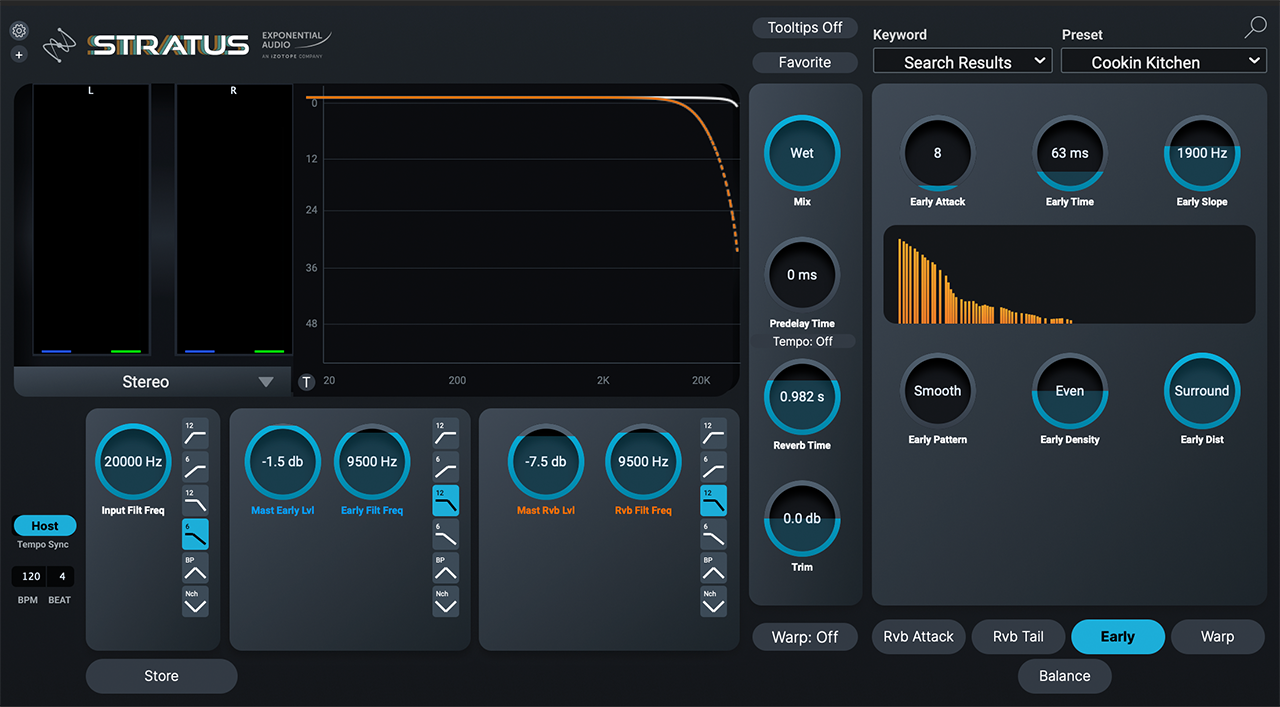 Notice the pattern of the Early Attack parameter: it’s sharp, sloping from high to low. This brings the reflection closer to us. Here’s what it sounds like if we take out the tail of the reverb, leaving only the early reflections.

If we increased the Attack all the way to the right, the room would feel different.

Now we hear more of a distinct echo, because the later bits of this vital, early series of reflections are emphasized, while the initial ones are minimized.

Two other parameters—Early Time and Early Slope—control other facets of the early reflections. Early Time governs their overall duration in milliseconds, while Early Slow puts a low-pass filter on this part of the verb, so the sound gets progressively darker with each individuated reflection.

2. Put the character near a window

Let’s try another location for our character: let’s have her looking out a window in her apartment. To do this, we’ve selected Room with a View from the preset menu. This setting gives you another verb made primarily out of early reflections; indeed, the reverb tail is almost 16 dB quieter. STRATUS preset for post production "Room with a View"

We can hear a pronounced bounce-back of early reflections, almost like an echo. This makes it sound like her voice is bouncing off glass as she admires the view from the window.

How did we get this sound?

Let’s look at the early reflection’s attack: it’s a straight line, not an arc sloping up or down. This, combined with an Early Time of 61 seconds, generates a roomier sound than the first example. But something else is going on here: look at the tail: 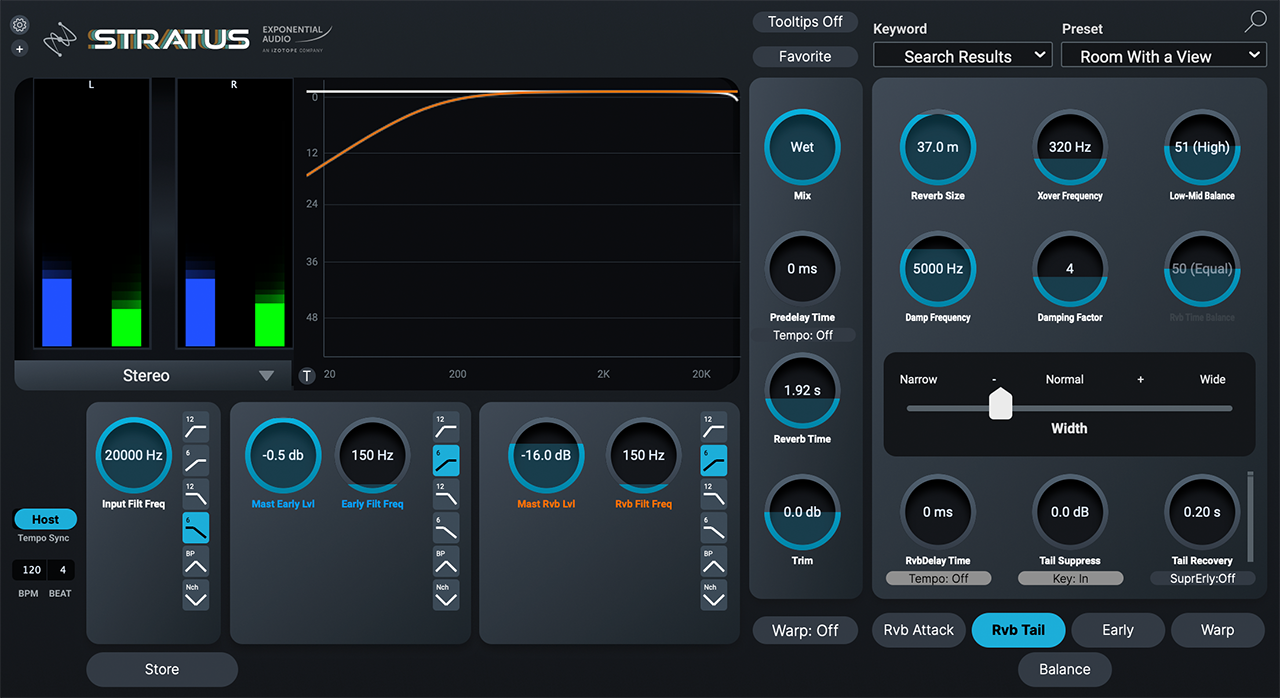 We’re at 37 meters—rather than the 7 meters the kitchen preset was giving us. It gives us a bigger space on the tail end. Here’s what it sounds like if I mute the early reflection and raise the tail, so you can just hear the long verb:

A long verb that’s relatively dark, the tail is farther away, allowing us to really hear the bounce-back from the window that the early reflection gave us.

How did we get this darkness? Notice the Damp Frequency and Damping Factor parameters. The first dictates the frequency above which a low-pass filter will begin rounding off trebles in the tail. The latter has the effect of shaping the filter even more—at lower values, it’s quite dark, and at higher values it’s bright. So if I bring the Damp Frequency up to 20 kHz, effectively bypassing it, we get a much brighter sound.

These examples underscore what you can do by paying attention to the tail of the reverb in a post scenario. In this case, the early reflection can used as the bounce-back reflection of our window, while the tail gives us more character of the room. We can change the character of the room with the parameters highlighted above. In real-world scenarios, we may need to do this quite a bit, so it’s good to learn how to change these facets.

3. Put the character in a large, empty room

Let’s check out another preset in NIMBUS called Lge Live Room. I’ve turned it down a bit here, because I want you to hear it at a more reasonable, real-world level. 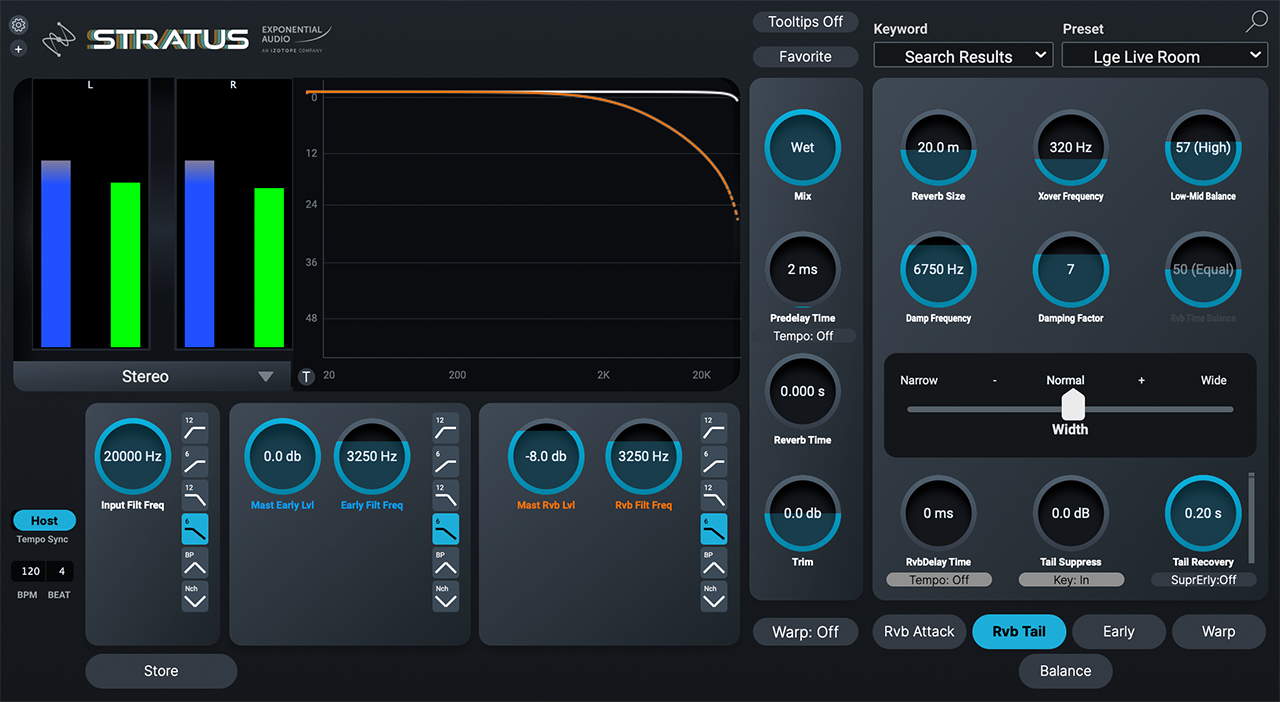 We can really hear the quality of the walls in this one. Indeed, this could work well for an empty room. Picture a scenario where a character had to move out of her apartment; we could use a less reflective verb in scenes where the character actively packs her things, and then switch to this reverb when she looks over at her now-empty room. It would be quite effective indeed.

So what’s accounting for the particular quality of this verb? Other factors we’ve looked at before, to be sure, so let’s examine some other ones.

Note the low-pass filter on the early level: it’s at 3,250 Hz, really emphasizing that piercing high-mid range. Also we’re working with a pre-delay for the first time—only 2 ms, but it makes a difference in individuating the echo. We use pre-delays in music often to help distance the verb from a singer. In post, we can use them to dictate a physical location. That’s what I hope to show by highlighting this preset—the power of pre-delay and filtering the input signal.

4. Put the character in a wide open desert

Stratus has some lovely exterior options for post. Here we’re imagining our character standing in a flat field, and the preset we’ve chosen is Desert Sunset. 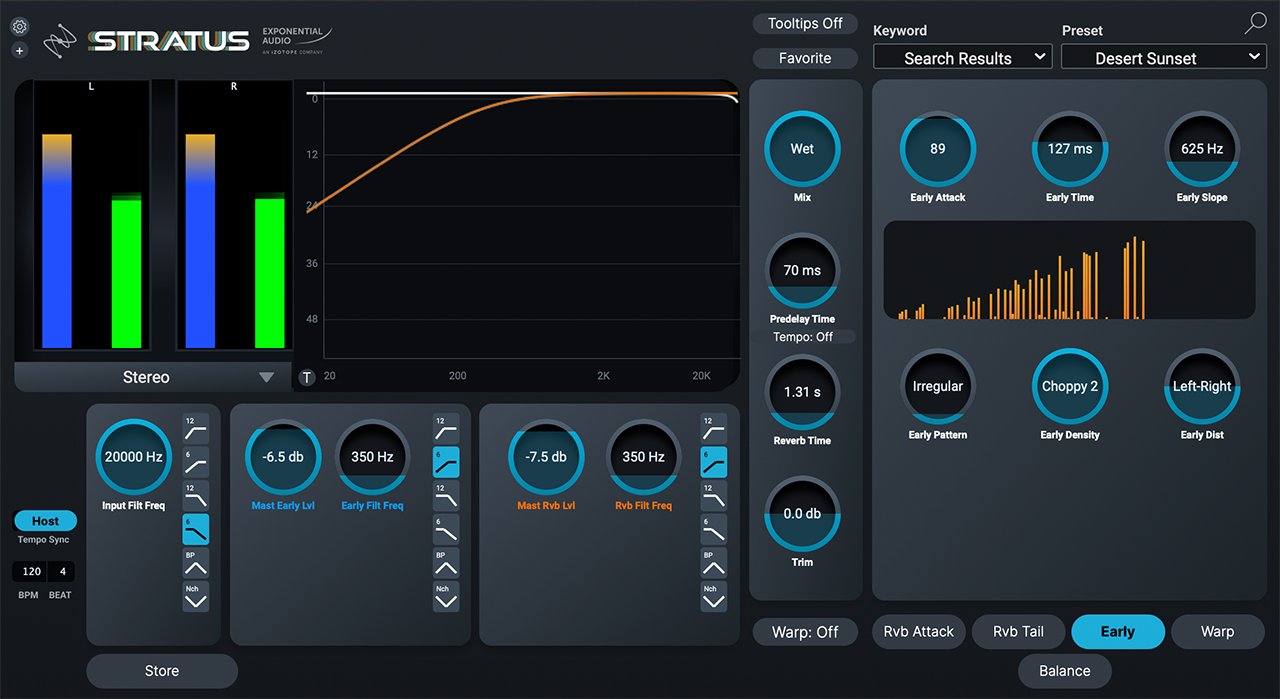 Notice the long pre-delay time of 70 ms, which gives us a discrete echo. This could be excellent for a wide shot where the character took up little space in the landscape; it would emphasize the feeling of being dwarfed by the locale. The attack of the early reflection is also worth looking at, as it increases over time, making the echo more apparent towards the end of its 127 ms of timing.

Give a gander, too, to the timing. If we decrease this value to something 23 ms, suddenly we’re in a space that feels much smaller.

Let’s shift to the tail and analyze what’s going on here. Note the low-mid balance emphasizing the frequencies over 825 Hz. These frequencies are taking longer to die down, giving us a colder, brighter sound, one that’s commensurate with a lack of absorbing materials in the landscape. Furthermore, check out the knob marked reverb delay time: this puts even more delay onto the tail, moving it farther away from the earlier reflections in time. This helps contribute to the depth of field.

5. Put the character in a parking lot

We’re going to try something different here. The Stratus preset is called Company Parking Lot, and it sounds like this:

I’m not going to explain how this preset accomplishes its goal of taking us to a parking lot. Instead, I’d like you to download the demo of Stratus and open up this preset yourself! Analyze how it’s accomplishing this feat in the manner we’ve done so far. If you’re feeling particularly enterprising, you can tweet your thoughts to me or to iZotope.

6. Putting Exponential Audio through its paces

This line we’ve been using, the one about the jacket? It actually comes from a project I did a few years ago. The actress had delivered the line while laughing, and the director realized later on that she wanted it to sound more serious. So we “looped” the line at my house.

In the scene, without processing, it sounded like this.

Luckily, we had the original, so I EQ matched it with RX, and it sounded like this.

It still wasn’t quite right, so I added some Nectar 3 to balance the timbre.

Close but no cigar; notice the bleariness of the other character’s voice: It’s reacting to acoustical anomalies most unpleasantly; nonetheless, we have to mimic it. Using an instance Stratus on our character, we can recreate this effect by bouncing her voice around some horrible acoustic anomalies as well. 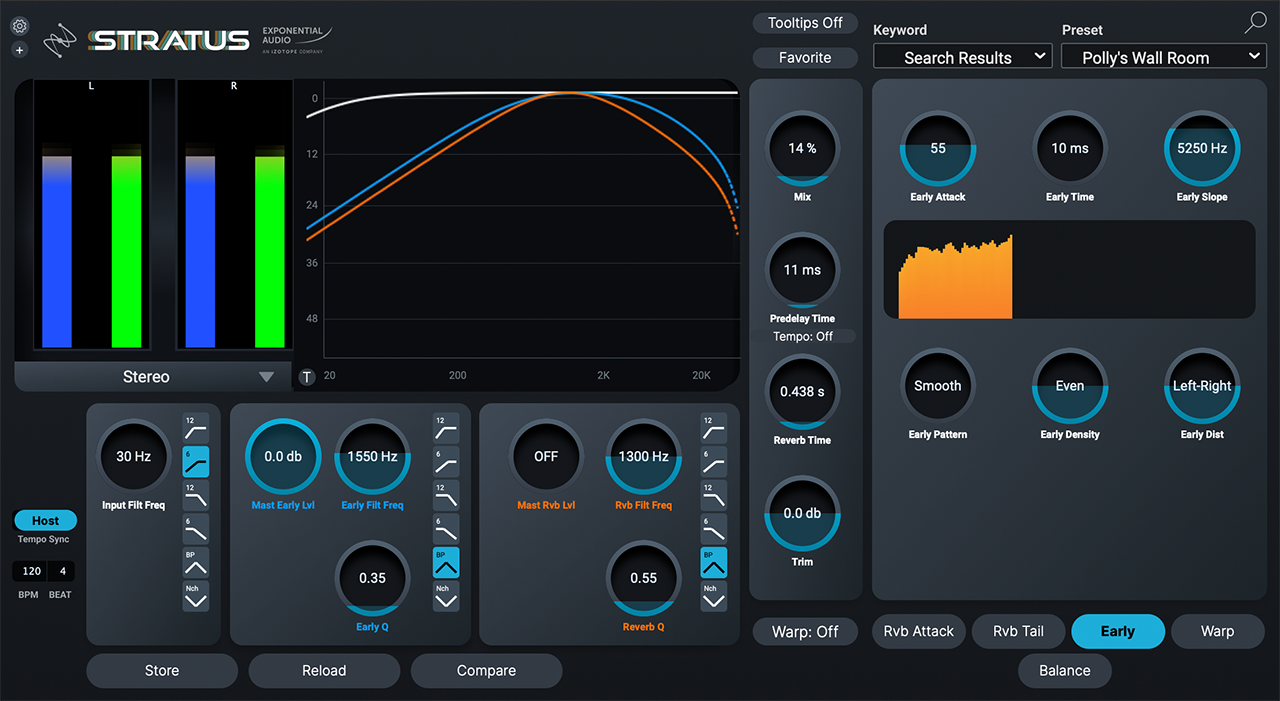 It’s all early reflections. We use an Early Time of 10 ms, and bring the attack to 55 to even out the reflection amplitude over time. Then, we bring the wet dry down to 14 percent. It sounds like this:

Notice how it tonally works better, but the space is still out of whack. Now we can put her in the appropriate room. Here let’s choose a preset from Nimbus.

The scene takes place in a laundromat, and the best preset was “Pauly’s Wall Room.”

And taken all together, the scene sounds like this.

You know it’s a fake, so you might still hear the difference. But it fooled the production team and the audiences at home.

Each preset we’ve covered has been selected with one goal in mind: to show off an individual facet ripe for the tweaking, whether it be in the early reflection section, the tails, the pre-delay, or the filtering. We can, in every case, start from one of these presets and tailor the sound into something that benefits our needs. We can even simulate the horrible effects of comb filtering if we need to! Indeed, the tools provided here are quite powerful, and thanks to their design, never convoluted.

This is both a pun and a swipe at the old saw that convolution reverbs always sound more real (these are algorithmic verbs, after all). Real is in the eye of the beholder, and if we learn what we’re doing with reverbs like this, we can generate a genuine sense of location every time. It’s our hope we’ve provided you with a way forward in this enterprise.