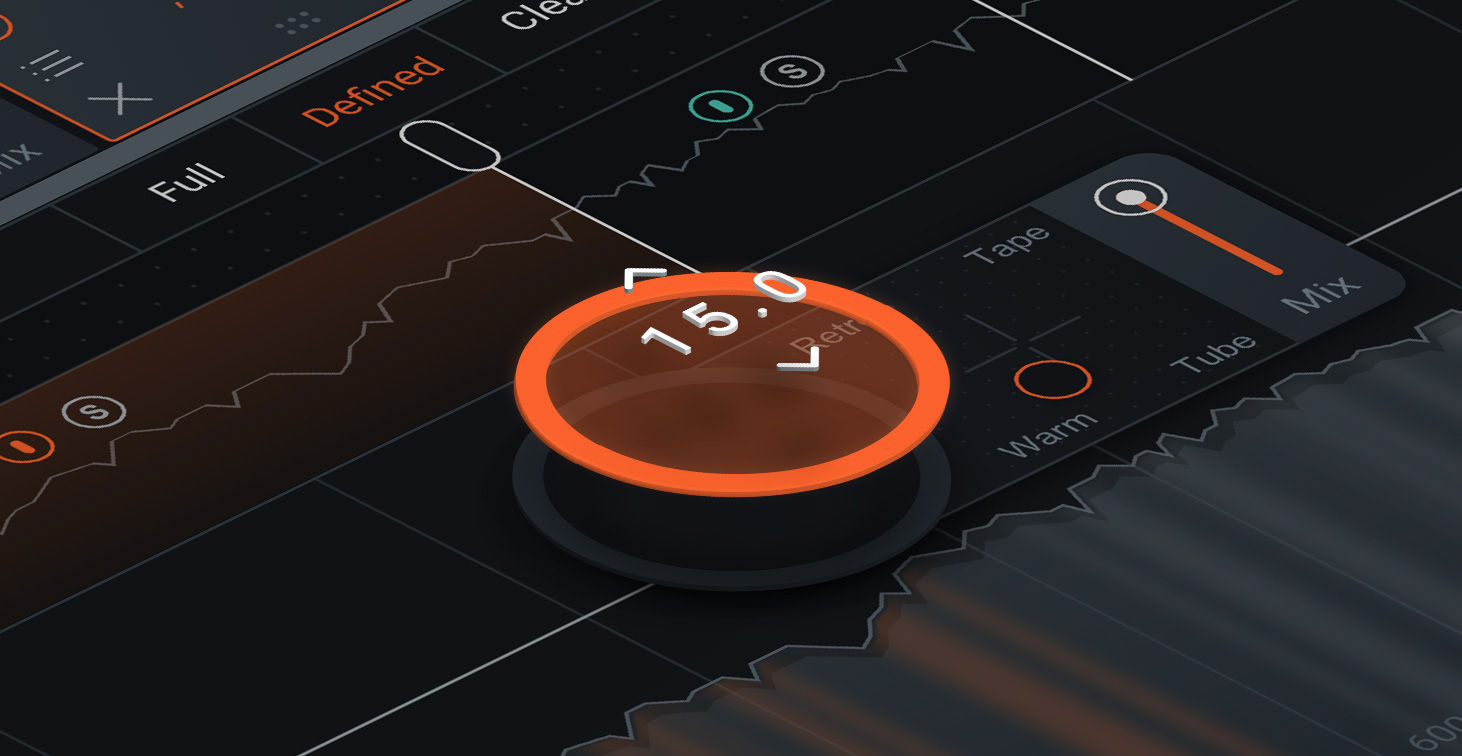 You may notice that we have a new type of control in Neutron 3. While it might not be a radical change from the controls you’re used to using in our plug-ins and others, we believe it’s a nice step forward for our products. Introducing: the Gauge.

The Gauge is a natural evolution of the widgets commonly found in plug-ins, namely knobs and sliders. When we started design work for Neutron 3—a powerful and complex plug-in—the Product Design team chose to use knobs as the primary widget to help make room for beautiful, smooth visualizations.

When we started to show our initial designs to the rest of the team, a healthy debate about the advantages and disadvantages of knobs and sliders arose:

You’re probably used to interacting with knobs if you’ve used audio software, but they actually aren’t very common outside of our industry. Apple’s Human Interface Guidelines call them Circular sliders, and they don’t even exist Microsoft’s Design Guidelines for Windows.

The main benefit of using knobs is that they take up less space than other controls, allowing more parameters to be displayed in a smaller area on a screen. This means that visualizations can occupy more space. However, knobs can feel strange to use for a variety of reasons and are therefore a pretty rare control in software design:

Sliders, on the other hand, are great for seeing relative levels—one reason why they’ve been used for level faders in both physical and digital mixing consoles.

In the past, we’ve leveraged knobs and sliders to their own strengths. Generally, we’ve used groups of sliders for easier level comparison and groups of knobs when screen real estate was at a premium. This has worked well for us over the years.

However, as we found ourselves debating the pros and cons of these widgets, we realized something: knobs and sliders are so ubiquitous in our industry that we’d never considered the possibility that neither was the right choice, or that there might be an opportunity to improve upon them. Just because something is commonplace doesn’t mean it’s the best choice.

We wanted a widget that could combine all the benefits of both knobs and sliders, optimized for true human-computer interaction rather than the traditional, skeuomorphic designs often found in audio software.

The first alternative control that we looked at was scrub text, a simple readout that can be adjusted either by dragging up and down or sometimes with clickable arrows to move the parameter incrementally.

After seeing other great examples of scrub texts in our industry, we wondered if we could employ similar controls for the majority of our parameters in Neutron 3. With the right typography and dragging sensitivity, perhaps something simple could serve as our primary widget.

While this experimentation worked to some extent, we missed having visual indicators of range and position.

We began mocking up some alternative controls, aiming to clearly present the control’s purpose, range, current value, and unit of measurement, all while optimizing for a small size to clear up screen real estate.

Here are a few of the early concepts that we worked on: 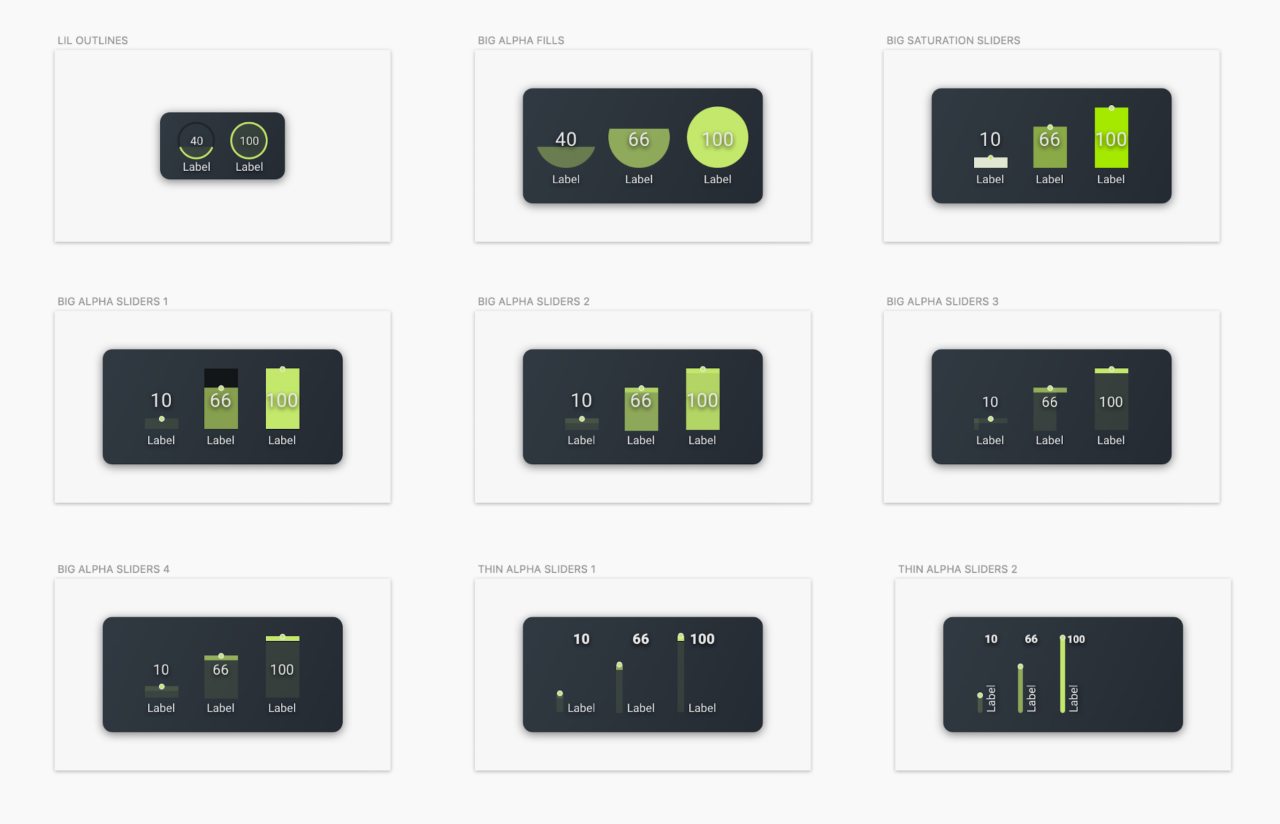 As you can see, most of them are simply elaborations of sliders. However, we were intrigued by the concept of using the outer ring of a circle to show level. Mocked up by our UI Designer Jamie Chaves in the top left example, it seemed to display relative level well and achieve a small size, our two main concerns with existing controls.

We wanted to build a prototype and test it to see if this was truly the improvement we wanted it to be. Mike McNasby, our Manager of Platform Design, joined us in our pursuit and contributed by building a quick prototype on CodePen.

When we tested the prototype internally, we quickly knew we were on the right track, but we discovered that it needed additional details:

1. We wanted the center fill of the Gauge to illuminate as it increased in value, an idea taken from some of our other concepts above.

2. Once the user clicks on the Gauge, we wanted the parameter label to show units.

3. In place of a cursor state, we wanted arrows to appear on demand within the Gauge to guide users toward moving the control up and down. When the Gauge is at either extreme, only the arrow pointing in the available direction shows. 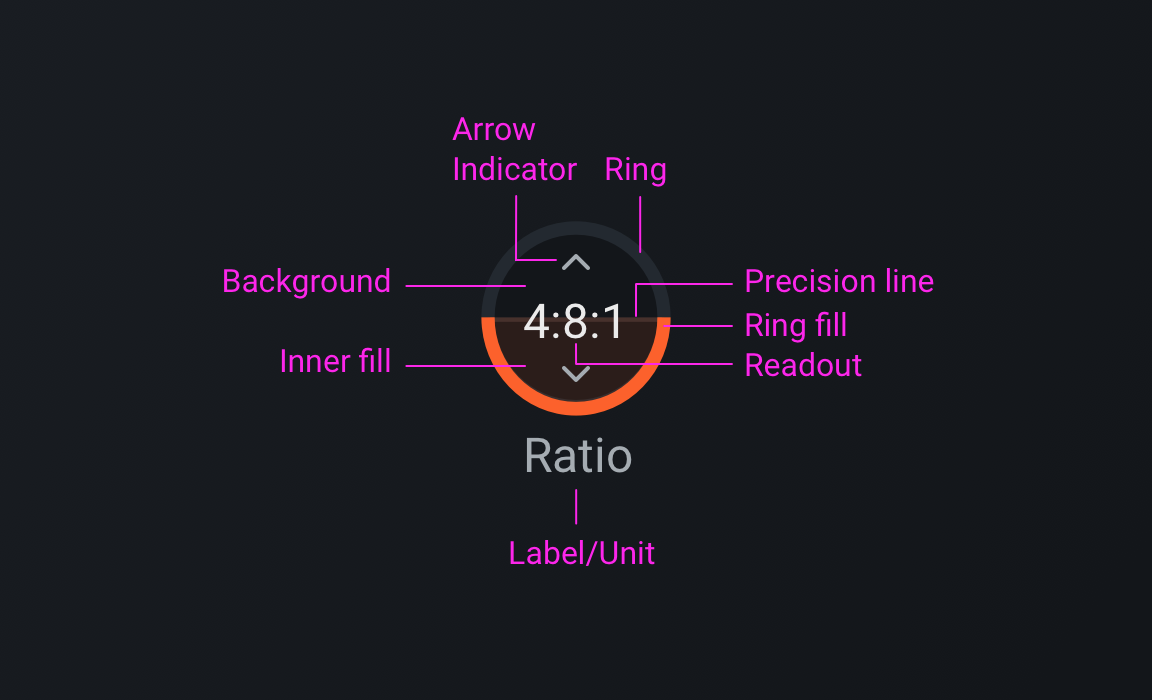 Anatomy of the Gauge

These little niceties and enhancements not only increase usability, but they also make Neutron 3 more enjoyable to use.

After a few rounds of enhancements, we spoke with customers to make sure we were creating something that would improve upon the status quo. While a few users needed some time to adapt, the majority either really enjoyed it, or didn’t notice at all—a good sign that we were enhancing our control without inhibiting anyone’s workflow.

So what would Neutron 3 have looked like without our healthy internal design debate and some problem solving? Probably something like this: While the knobs that we began with would have worked fairly well, we think that the Gauge improves the overall experience of using Neutron 3 (especially when making fine-tuned adjustments in the Compressor and Gate modules).

We hope you’ll enjoy the Gauge some of Neutron 3’s other finer details as much as we enjoyed making them.