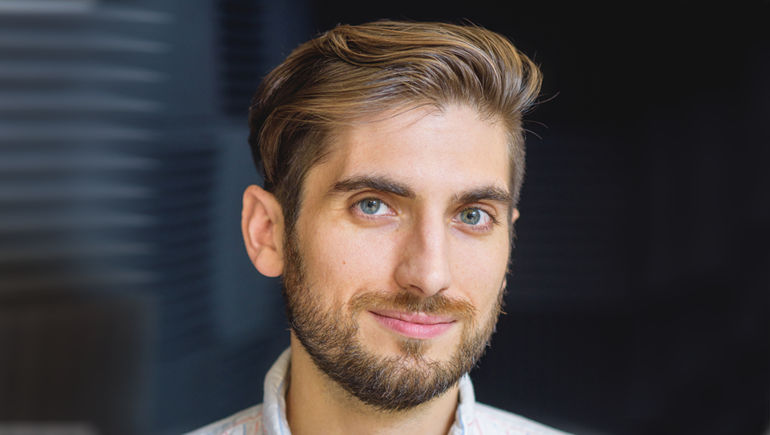 Last week we were lucky to have Brendan Baker from Radiotopia’s Love + Radio stop by and chat with us about the show, the challenges most podcasters face, and how he solves them (hint: it involves a lil’ love from RX).

Can you tell us about yourself and your role?

I’m a podcast producer specializing in creative sound design. My main project is Love + Radio, where I’ve been collaborating (mostly behind the scenes) with host, Nick van der Kolk, since 2011. But I’ve also spent the last decade or so freelancing as a producer/sound designer/engineer on all sorts of projects throughout the public radio and podcast worlds, including The Message and the first season of Invisibilia.

What we do on Love + Radio, though, is pretty unusual compared to a lot of “interview” podcasts out there: we produce highly edited, first-person non-narrated stories. In other words, we interview people about their lives for several hours, but then we cut out most of our questions in the editing process, boiling it all down to about 30 minutes or so. It’s like you’re listening to this uninterrupted story told from the perspective of our interviewees—like a documentary film but without visuals. Then I use sound design almost in place of visuals, to help bring those stories to life.

Though my job involves a lot of the same stuff as most podcast producers (interviewing people and editing recordings), what sort of differentiates my role is how I work with all the different layers of sound—spoken words, music, and other sound effects—and edit them together holistically to tell a story. I’m trying to create these immersive sound-worlds that engage listeners on multiple levels of consciousness in addition to the main content of the podcast: the spoken words.

I’m trying to create these immersive sound-worlds that engage listeners on multiple levels of consciousness in addition to the main content of the podcast: the spoken words.

What are some of the most challenging aspects of podcasting, from an audio standpoint?

One of the most common challenges podcasters face is that we’re often recording in noisy, untreated, or just unpredictable environments—whether that’s at home, in an office conference room, or somewhere out in the field.

For Love + Radio, we usually interview people for anywhere from four to 10 hours, sometimes over the course of a few days, and we’re usually recording at our interviewee’s homes. Hopefully that makes our guests more comfortable, but the tradeoff is that sound conditions can vary dramatically from minute to minute, day to day, episode to episode. One of the more technical parts of my job is to make these different recordings sound as good as possible, and to create an overall consistency in our show’s sound.

Why has podcasting taken off as a medium in the past 5 years?

I think it's similar to what happened with home recording and the music industry. It suddenly became much easier to create and distribute your own show on the internet without the resources or—maybe more importantly—permission of a radio station. And while some of the people who got hip to podcasting in the early days were "professional" broadcasters or comedians looking for new ways to get their work out into the world, there were also a lot of self-taught amateurs—people doing it for fun and finding an audience in the process. In that way, the technology offered a relatively level playing field, bringing more and more people into the podcasting fold (both as producers and as listeners).

But much like producing your own music, while it’s easy to get started in podcasting, it also takes time to practice your craft and build an audience. Sarah Koenig of Serial didn’t come out of nowhere—she spent years honing her skills at This American Life. And because Serial’s success really helped launch podcasting out into the public consciousness in a major way, I think there’s also been a growing appetite for other well-produced, well-crafted podcasts. Now we have people from all parts of the media and entertainment industries learning to adapt their skills to this new medium. And as with music or filmmaking, I think there’s plenty of room for all types of shows, subjects, niches, and styles within podcasting. There are an infinite number of ways to capture an audience’s attention and imagination.

How are you using iZotope tools in your workflow?

Can I admit I use RX on basically everything without sounding like a shill? It’s really true! It began the first time I started experimenting with Spectral De-noise in early versions of RX, using it on noisy interview recordings. Now we have Dialogue De-noise, which is even more transparent on vocal material. It's usually the first insert in my plug-in chain on voice tracks, followed by Alloy 2. I’ve made a bunch of custom presets for Alloy 2 to cover EQ and compression settings for our typical recording environments.

Taken together, I have a surprisingly effective system to make disparate sound elements work together in a mix with my levels in the right ballpark almost out of the box, but also with enough flexibility to tweak and refine the mix as I go. And then I always keep an instance of the Insight meter on my master track. It gives me a reliable way to sort of “peek inside” the mix to confirm what I’m hearing visually and to make sure levels are to spec, etc.

I’ve been introducing this system to the other shows in our network, Radiotopia, and it’s been so gratifying to see how even producers without a lot of engineering experience are able to make pretty radical improvements in their mixes using these tools.

Lately I’ve been playing this game whenever I teach the standalone RX app to podcast producers: “reading” the spectrogram like a musical score. “I can see a huge breath here, a plosive there, this is where the air conditioning noise begins, and you’ll hear some cell phone interference in about 5 seconds…” And then I show people how to eliminate each of these problems in seconds. It’s like you’re reading The Matrix.

I’ve been introducing this system to the other shows in our network, Radiotopia, and it’s been so gratifying to see how even producers without a lot of engineering experience are able to make pretty radical improvements in their mixes using [RX, Alloy 2, and Insight].

If you could invent a product to solve all of your audio woes, what would it be?

I use and swear by Reaper, but lately I’ve been dreaming of a spectrographical DAW. Imagine being able to transition between waveform and spectrogram modes as you can within RX, but on a clip-by-clip, track-by-track basis. It’d be like painting with sound. I’d probably never leave the studio.

On a more practical level, though, I think that I and other podcasters would love an easy and reliable way to record remote interviews over smartphones—just as if you were recording both sides of a phone call but with full-quality audio. If you could make the app super easy for guests to download and use, but also have it connect to a plug-in on your DAW on the producer’s end so you could record (or play audio clips back through the interface like a “mix minus”)—that’d be huge!

Hear more from Brendan and the guys over at Love + Radio by subscribing to the podcast on iTunes.