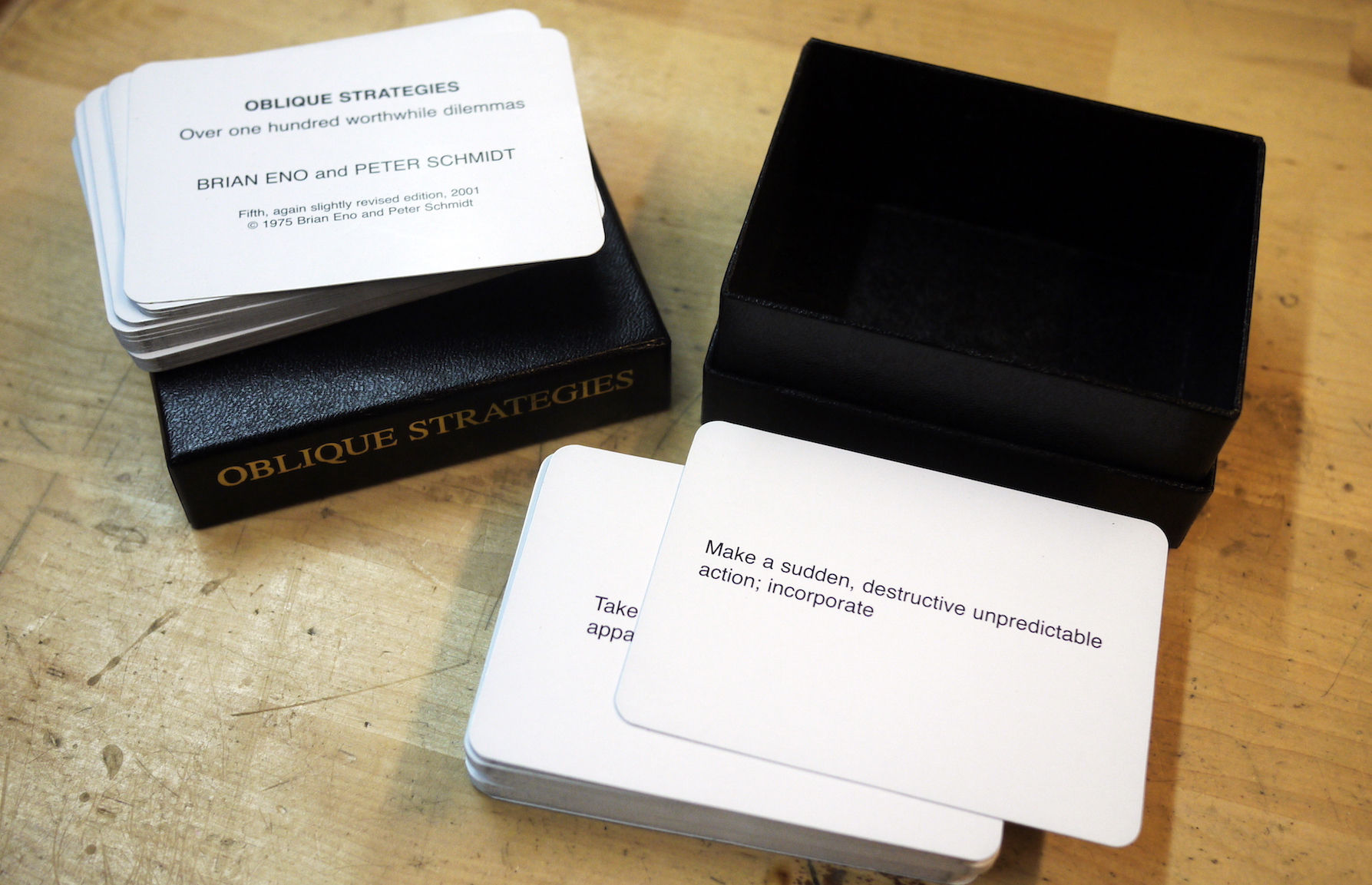 Ever gotten stuck in your songwriting or music producing process and didn't know where to go next? Sometimes all you need is to step away from the song you're working on. Other times you may just need a fresh perspective.

In this article, I’ll explore one of my favorite methods of getting out of the "I'm stuck" zone: Oblique Strategies.

What are Oblique Strategies?

Oblique Strategies is a set of cards created by musical egg-head Brian Eno and british painter and color theoretician Peter Schmidt to help people break through creative blocks. If the name Brian Eno sounds familiar, it's because he's the musical brains behind such icons like David Bowie, U2, and Coldplay, having produced albums for all three. He also has had a highly successful career as an artist on his own.

So what exactly are these cards? Well, they were first published back in 1975 and came in a black box with 113 cards inside. Throughout the years, many editions have been released, but the fundamental idea remains the same: Each card contains a short (sometimes cryptic) suggestion or remark which could be used to help you out of a creative block or dilemma situation. 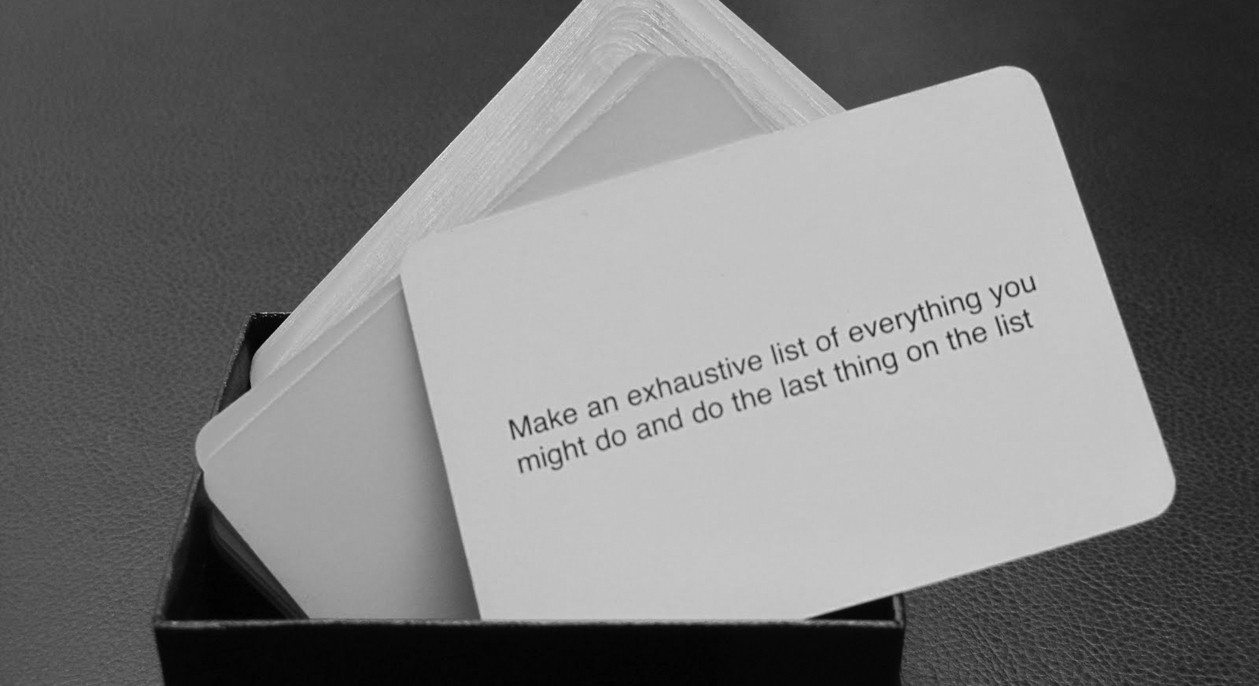 How do you use the cards?

There's no true right or wrong way to use them, but the basic principle is: Whenever you're stuck you draw a card (or multiple) and consider how it applies to your situation. You never know how it may inspire you to move forward. Here are a couple examples of what you could find written on the cards:

Because we're all individuals, we bring our own unique histories, backgrounds, biases, and mindsets into the interpretation of what the cards may mean to us in relation to the problem we're trying to deal with. And what's more interesting is that you could end up interpreting the same card in completely different ways on different projects.

So pick a card and see what it could mean to you. It may just unlock some new options that you hadn't considered before. And if it doesn't, that's ok. You may draw as many cards as you wish. After all, it doesn't matter how or when you break your blockage, what matters is that you finally found something that triggered an "aha" moment that let you move forward.

Where can you find Oblique Strategies?

To date, there have been six printed editions, including a couple limited ones which can occasionally be found on auctions around the world.

For those of you that love having a tactile experience, you can purchase Oblique Strategies directly from Brian Eno on his website.

Since so much of our world is now digital, you can also find many different digital versions of the cards. There are iPhone and Android apps, and even a website that allows you to access many of the cards for free. You can even find Oblique Cards as an Alexa Skill! Your options are pretty much limitless.

I was recently working on a piece of music where I started off with a great funky bass part and a solid groove. After laying out the main section, I started adding some elements. I added some guitars, a synth—the things you would most expect to hear there.

It sounded great, but I still got stuck. I kept going in circles trying to answer: What do I do to it now? How do I make it more interesting?

Let me share with you the excerpt of how that section sounded like when I entered the dreaded "I'm stuck" zone.

Sure. I thought it sounded pretty good. But where would I take it next? I decided to turn to Oblique Strategies to see if I could find some inspiration on how to move forward. (I used the oblicard.com website). Here's the first card that popped up: 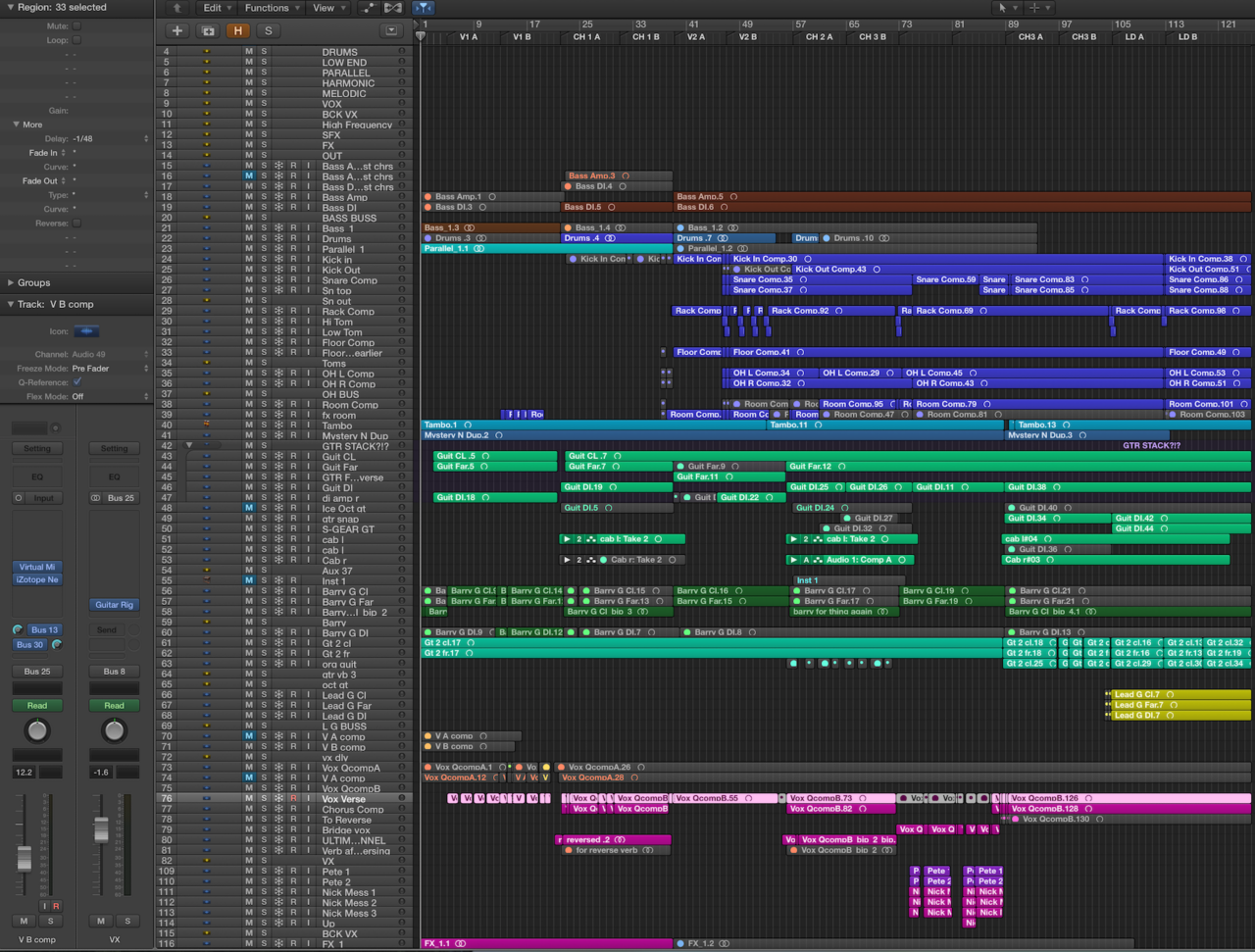 "Children's voices -speaking -singing."  What the hell does that mean? How would I use children on a funky tune like this?

My mind was starting to spin, so I went on a hunt throughout the dozens of sample libraries that I own.. The closest thing I found to “children singing” was a boys choir sample library. That could never work...or could it?

I decided to play with the idea and found something that sounded fun. I spread out some short staccato notes here and there. Surprisingly, it worked and actually sounded pretty neat.

What if I layered more of the boys’ voices and turned their notes into a soft ostinato (repetitive motif) that pulsed along with the guitars?

I tried it. And somehow it still worked, so I kept going. I threw a bit-crusher plug-in on the vocal sample to make it sound a little less "classical," and make it fit better with the rest of the piece. These new additions were definitely starting to go somewhere unique.

For the final piece of the puzzle, I thought, “is there any way that I can incorporate speaking voices?” I found a sample of children cheering. On its own, probably not a very useful sample in a song. But what if I morphed it in so many ways that it would be hard to tell that they it was children cheering? What if I sliced it up and made it super groovy? I decided to use Stutter Edit for this. A couple tweaks later, I had an awesome "stuttery" effect that was built on the kids cheering sample. I decided to subtly add the original cheers (with some heavy automation) into the mix. Things were really starting to come together. Here's what I had by this point:

I was really starting to like where things were moving. In the end, whether or not I was going to keep all these ideas didn't matter. What was important was that I was moving somewhere and the ideas were flowing.

Soon enough, however, I faced another dilemma. I realized that as good as that section was, it felt pretty repetitive. On one hand, I needed the repetition for what I was doing, but on the other, just playing it straight through made it sound stale. Sure, I was adding some layers in at the 30-second mark, but it still felt like I needed something to break into that new section. I tried adding a fill. It wasn't doing the trick. I tried adding another riser. Nope. It was predictable. I tried a couple other ideas. None of them seemed to stick.

Since Oblique Strategies had really given me some great ideas with the "kids", maybe they could provide some equally good inspiration for how to deal with this new obstacle? So I pulled up the website again and here's what I was offered:

Reverse? Reverse what? The entire section? A single instrument? Reverse my thought process? Reverse (as in undo) by say 30 steps and see where that leaves me? So many ways to interpret that. Wait! What if right before that new section I play the groove backward for a bit?

I grabbed my groove and did a quick reversal. It sounded good! I moved it around a bit and listened. I decided to actually only play certain beats of it and mute the rest. Now I had some great contrast happening with the groove! Not only was I going in reverse but I was giving it a bit of a half-time feel. Which meant that going back into the regular steady groove would sound fresh. I decided to tweak it further by adding some nice filter-sweep automation to this reversed groove.

Since I love creating contrasts, I decided to cut some of the kids out of this section as well. That felt good. Anything else? What if I cut out the bass as well? I filtered out all the low bass notes. Ah. Finally, I had a nice contrasting section which felt like it gave us something new and different sounding for a moment. It was different, but also simpler, and because of that, jumping back into the following full section created a nice "boom" moment. Take a listen:

What do you think? I was really liking what I was hearing. It was still a work in progress, but the great news was I was no longer stuck. Ideas seemed to be flowing again. One idea led to another, and then another. And it all started with an Oblique Strategies card.

You get to interpret the cards in any way you please. As long as they provide you with some ideas to explore, they've done their job. Who's to say if I end up using all these elements you heard in the final version. Maybe I'll keep some of the kids and get rid of others? Or maybe I'll end up reversing way more things in the process. The thrilling thing is that the music is happening.

Oblique Strategies have seriously helped me on multiple occasions, so I hope you give them a try. They have encouraged me to produce better tracks, as well as write better songs. Not every card you get may guide you to find the answers you seek. And if it doesn't, that's ok. You can always pick another one. Or another ten. But spend a little time on each one and consider the possibilities. Try to figure out what it means to you and how does it apply to your situation. You never know which phrase may be the one that unlocks the door to your creativity.