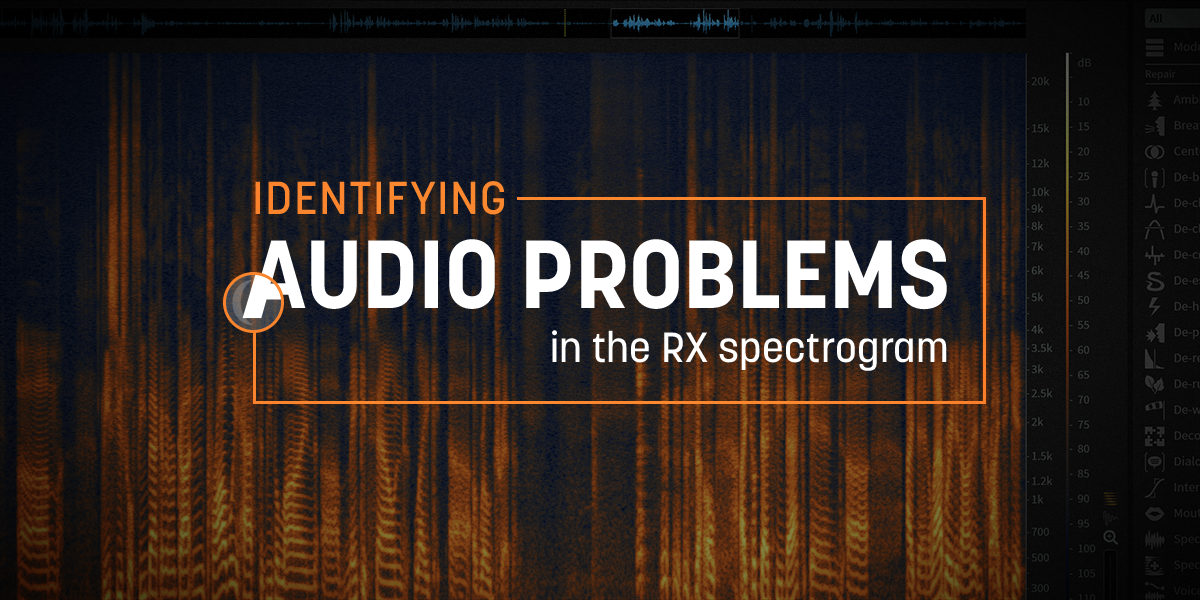 There are a number of different audio problems that tools like RX can help you attenuate or remove. Identifying what kind of noise you have can help determine the most appropriate tool and method for treating the problem. That's why we created this video:

Also check out how to identify seven common audio problems within a spectrogram or waveform display and get tool recommendations to help you remove them quickly and effectively:

Hum is usually the result of electrical noise somewhere in the recorded signal chain. It is normally heard as a low-frequency tone based at either 50 Hz or 60 Hz, depending on whether the recording was made in North America or Europe. You’ll see hum by zooming into low frequencies. It will appear as a series of horizontal lines, usually with a bright line at 50 Hz or 60 Hz and several less intense lines above it at harmonics.

To remove hum, use the RX De-hum module. It works best when frequencies of the hum do not overlap with any useful transient signals.

In some cases, electrical noise will extend up to higher frequencies and manifest itself as a buzz. Sounds like these can also come from fluorescent light fixtures, motors, and some on-camera microphones.

You’ll find buzz in high-frequencies where it will appear as a thin horizontal line.

To remove buzz at frequencies above 400 Hz, use the Spectral De-noise tool. For low-frequency hum, the De-hum tool is more effective.

Hiss and other broadband noise

Unlike hum and buzz, broadband noise is not concentrated at specific frequencies and can be found throughout the frequency spectrum. Tape hiss and noise from fans and HVAC systems are examples of broadband noise.

In the spectrogram display, broadband noise usually appears as speckles that surround the program material, as seen in the example.

Use the Spectral De-noise tool to remove these types of broadband noise.

Clicks and pops are common on recordings made from vinyl, shellac, and other grooved media. They can also be introduced by digital errors, including recording into a DAW with improper buffer settings or a bad audio edit that missed a zero crossing. Even mouth noises, such as tongue clicks and lip smacks, fall into the clicks category.

You’ll see these short impulsive noises appear in a spectrogram as vertical lines. The louder the click or pop, the brighter the line will appear. This example shows clicks and pops appearing in an audio recording transferred from vinyl.

Use the De-click tool to recognize, isolate, and then reduce and remove clicks or pops like these.

Clipping is an all too common problem. It can occur when a loud signal distorts the input to an audio interface, analog-to-digital converter, mixing console, field recorder, or some other gain stage in the signal chain. To identify clipped audio, you’ll want to work with a waveform display rather than a spectrogram. The clipping appears as “squared-off” sections of the waveform.

Zoom in on a waveform to see in detail where the wave has been truncated because of clipping.

Note that sometimes, brickwall-limited audio will also appear “squared off” when zoomed out, but this doesn’t necessarily mean it will sound as heavily distorted as clipped waveforms that have been truncated. You can zoom in to see if the tops of individual waveforms are actually clipped.

To fix clipping, use the De-clip tool. It can intelligently redraw the waveform to where it might have naturally been if the signal hadn’t clipped.

Intermittent noises are different than hiss and hum—they may appear infrequently and be inconsistent in pitch or duration. Common examples include coughs, sneezes, footsteps, car horns, ringing cell phones, birds, and sirens, etc.

These noises can manifest themselves in various ways. Here are a few examples to look out for:

Use the Spectral Repair tool to help you isolate these intermittent sounds, analyze the audio around them, and attenuate or replace them.

Sometimes a recording may have short sections of missing or corrupted audio. These are called gaps or drop outs. These are usually very obvious to both the eye and the ear and appear as a gap in the spectrogram display.

Use the Spectral Repair and Ambience Match tools to replace missing audio elements and create a consistent audio track.