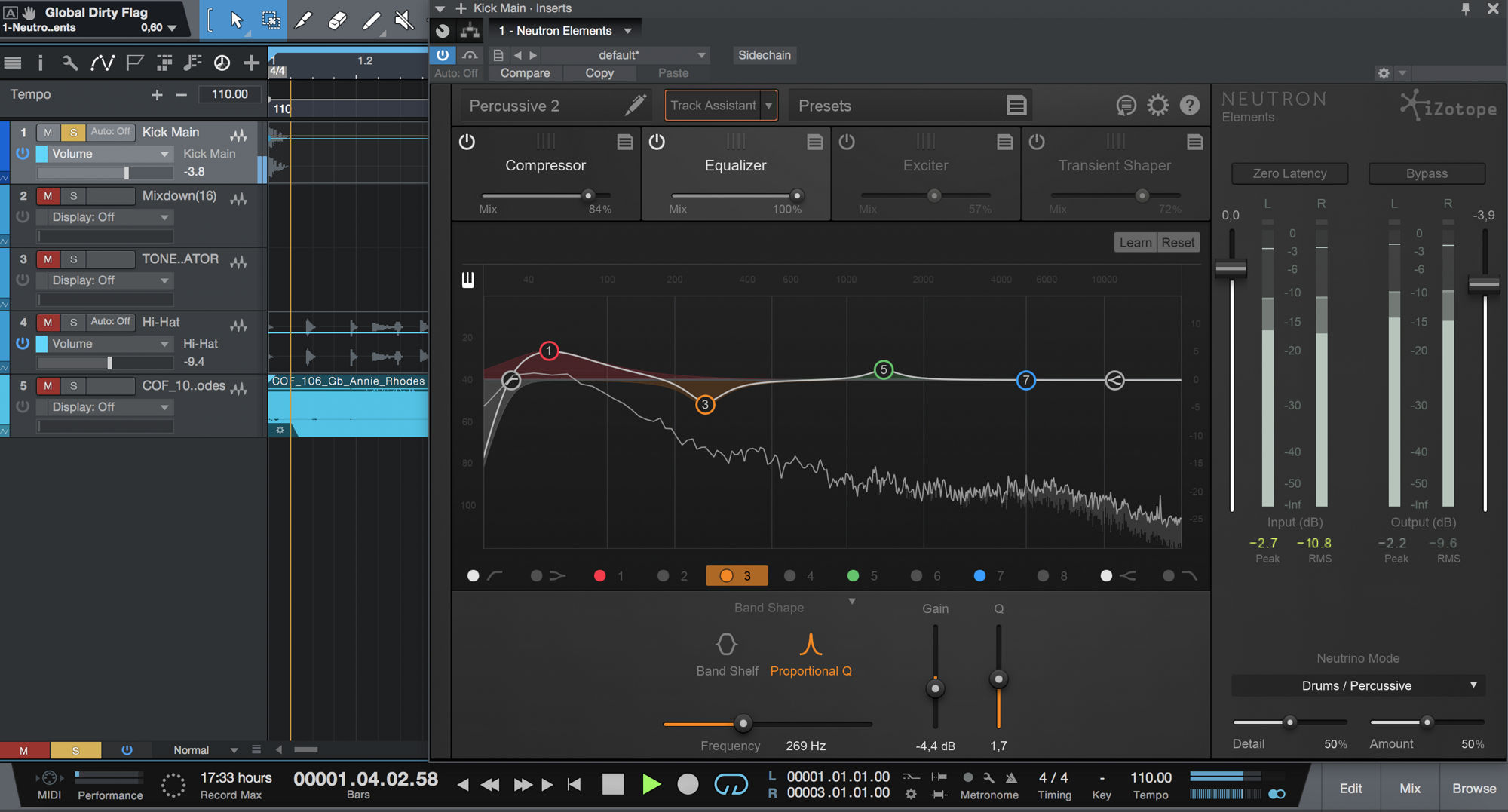 Kick drums are some of the more powerful sounds in music production, yet they require a delicate touch to get right. When they don’t poke through the mix hard enough, we struggle to connect with the groove. But too much punch and it's hard to focus on anything else but the kick. Low-end mud, rumble, and sound selection are another set of variables.

For this reason, we’re showing you how to mix kick drums that hit the sweet spot using the four modules in Nectar Elements—Compressor, Equalizer, Transient Shaper, and Exciter. The tutorial will be in Studio One, but the same principles apply to all DAWs.

Let’s first take a listen to the before and after of the kick drum in context of a song—the rest of the guide will break down the steps I took to achieve the new sound.

Neutron Elements: Kick Drum Before and After

Most of the snap and punch of a drum is heard (and felt) within the first few milliseconds of it being played. This is what we call the transient of a sound, and shaping this initial burst of energy is the starting point for a punchy kick drum. When choosing compression settings for a kick, a fast attack time will clamp down on the transient, reducing this impact. Since we’re going in the other direction, try a slow attack time instead so the kick avoids the compressor and the transient is preserved. If while listening back you find the result too punchy, speed up the attack until you get to a more relaxed sound.

Release time is how long the compressor holds onto the tail of a kick drum. The general idea is to set a release time that is fast enough so it doesn’t carry over to the next drum hit and flatten the signal. Your gain reduction meter should be bobbing in time to the beat.

As with all things audio, settings change from project-to-project. I suggest the following exercise to find the parameters that suit your audio: set your attack time at 0 ms and slowly increase it until the transient of the drum starts to come through with a clicking sound. Next, set your release to 80 ms (which is about as fast as you ever need it to be) and increase it, listening to how the signal loses sharpness. You’ll want to keep some of the bite in, so reel in the release time once you hit that point.

Unless I’m dialing in some large cuts and boosts, I usually find myself placing Neutron Elements’ EQ after the compressor to further shape kick tone. Again, what you choose to do here depends on the context of the song, but there are a few guidelines I find helpful to follow in most situations. I’ll pull up the EQ screenshot for reference. 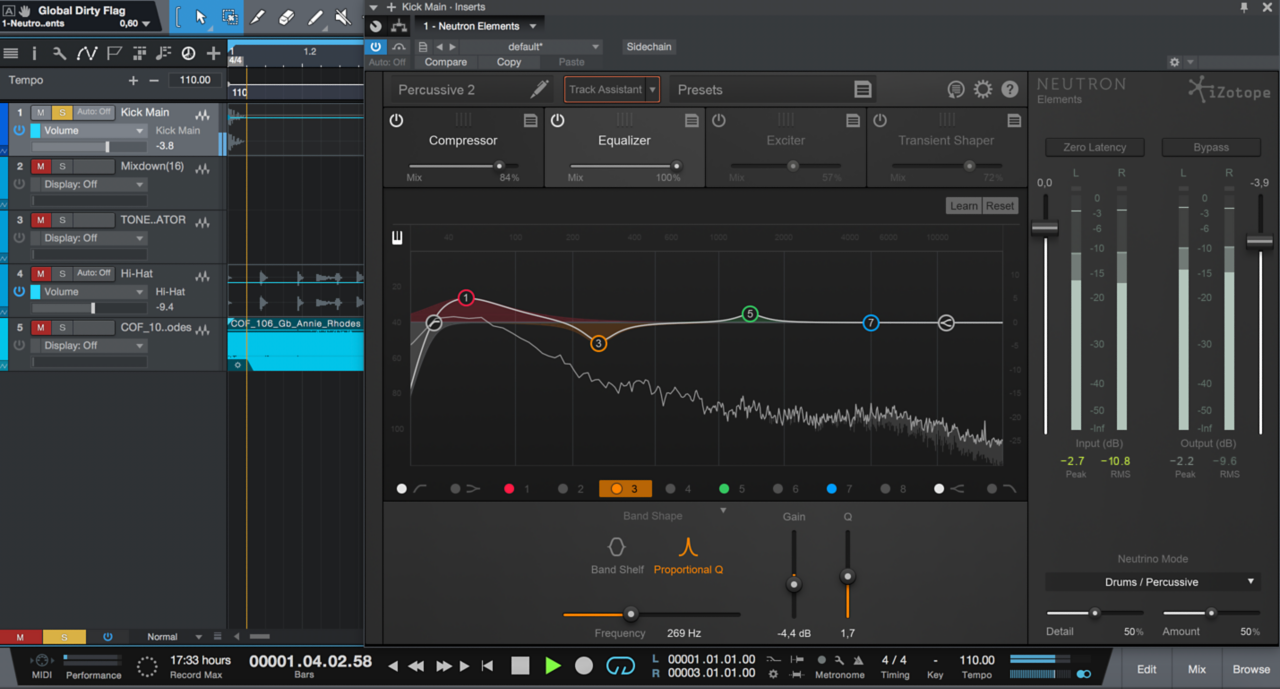 Sculpting with EQ in Neutron’s Equalizer

If your kick has some bass weight to it, a boost around the fundamental will bring out the subby qualities. I have a slightly wide EQ here, but don’t be afraid of going narrow either.

After bumping the lows, a small cut just to the right will help to prevent low-mid frequency buildups (150–200 Hz) that make songs sound muddy. Lots of instruments intersect in this area, so if you get a handle on it earlier rather than later, it’s to your advantage. Additionally, a boost anywhere between 1000–4000 Hz provides a snappy counterpoint to the thump.

Paired with compression, we start to hear some significant changes as the lows fill out the signal. Listen as the clip moves from the dry version to the compressed and EQ’d one:

Dry to Compression and EQ

If you are stuck at the EQ stage, I strongly suggest giving Learn mode in Neutron Elements a go. It will analyze your audio and place nodes at points of interest in the spectrum—including the ones I just went over.

Pro tip: you can EQ all day, but some recordings and kick samples just don't have enough low-end power. There are two workarounds that come to mind. One is to layer your kick drum with another that has complementary characteristics. If your original kick has some knock but no bass weight, pair it with something that does. The second is to use your kick drum as a sidechain trigger for the Tone Generator in Studio One. Depending on exactly how much much thump you need, set the plug-in to generate a sine wave between 30–80 Hz, then instantiate a gate after to adjust the attack and release to taste. Now every time your kick plays, so will a pleasant low-end sine.

If your kick drum is feeling a bit boring, try harmonic distortion for zest. Unlike the howling excess of say, iZotope’s dedicated distortion plug-in Trash 2, what you get with the Exciter is subtler, and can be blended into the signal to taste, emphasizing overtones that may not have caught your ear before.

It features four types of harmonic distortion (Retro, Warm, Tape, and Tube) that replicate the familiar artifacts of analog recording, but with digital precision. Case in point: the X/Y pad, where you can blend the various distortion characteristics together until you find something suitable. Choosing a Pre-Emphasis Mode (Full, Defined, Clear) allows you to specify where the effect should be active in the spectrum. 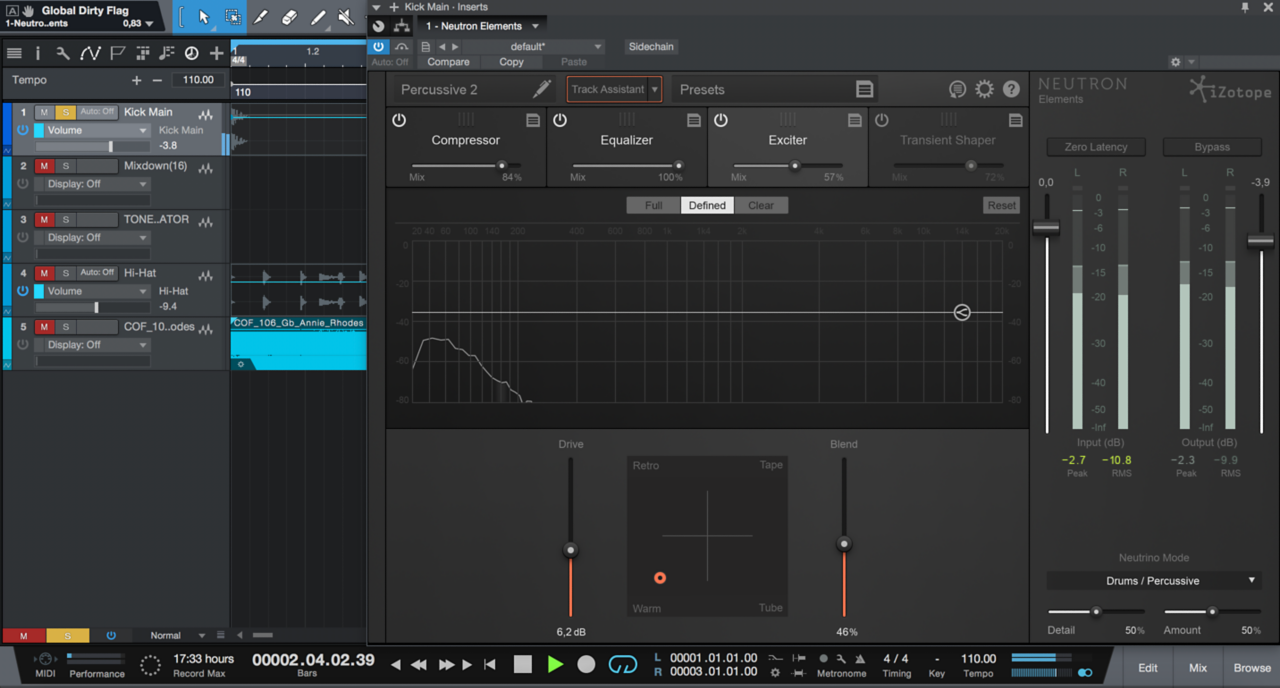 I pushed Drive just the point where the distortion was noticeable, then reduced Blend to the midway point, keeping some clean signal in the mix. For greater control, I also reduced the global dry/wet balance between the Exciter signal and the rest of the kick audio input.

Remember transients? Those initial burst of life at the start of a sound? With Transient Shaper we get another shot to tailor them exactly the way we like. Simple to use and capable of serious sonic manipulation, this tool is a secret weapon for many producers and engineers to shape percussive elements.

With two main controls that manipulate the attack and sustain properties of a sound, you can enhance the onset of a drum while de-emphasizing the room tone, mellow the heft of aggressive material, and make subtle loops more lively. Here, I’m using Transient Shaper to push up both the attack and sustain to inflate the kit drum. 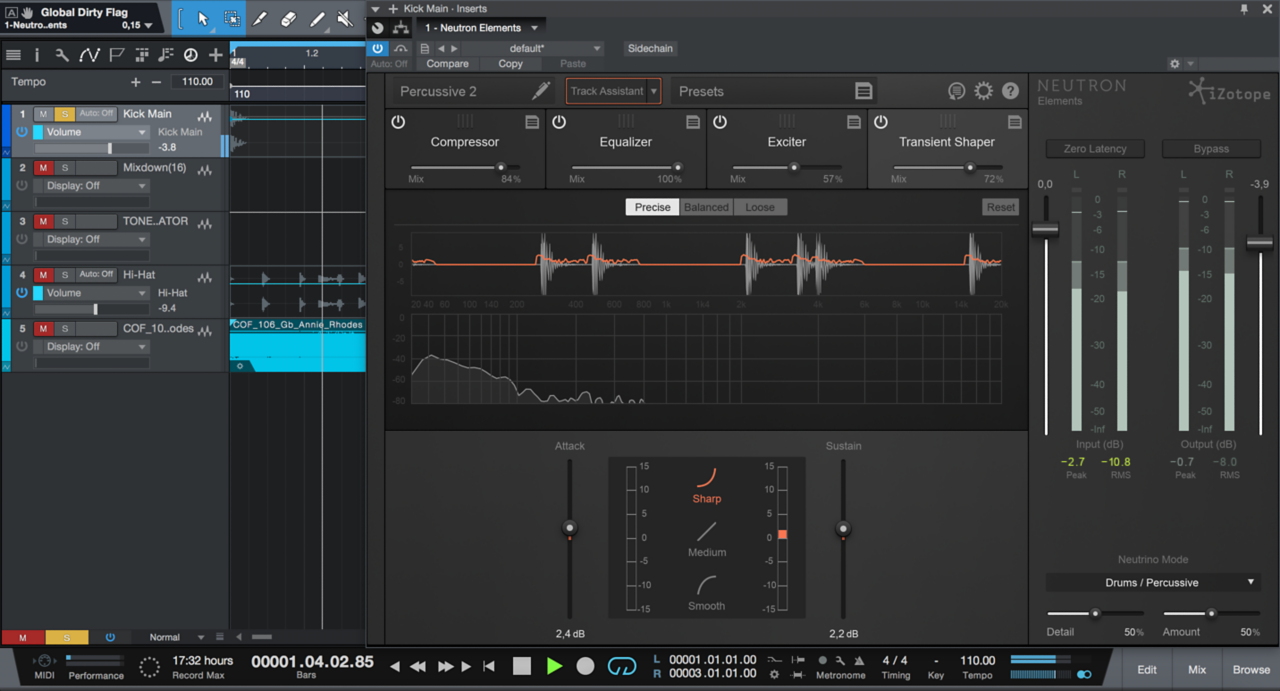 I chose the Sharp contour since it has the fastest and tightest release time, best suited for staccato material like kicks and other drum sounds. To avoid going over-the-top with punch, I reduced the blend level to a cool 72%.

Listen to the compressed and EQed version you heard earlier, then the full mix with harmonic distortion and transient shaping. It's a subtle difference, but you should notice a boost in presence, slightly more punch in the lows (from the attack) and more activity in the highs (from the sustain).

Compression and EQ to Full Mix

And once again, the audio clip with song context heard at the start of the tutorial.

Neutron Elements: Kick Drum Before and After

Looking for a little extra help? Follow along in our video tutorial to get your kick drums really smacking.

For Studio One users and beyond, Neutron Elements offers a streamlined mixing approach where you can identify sonic issues, improve character, and wield creative control from a single window. In this tutorial, we covered the all-important kick drum, but you shouldn't stop there. Once you feel comfortable with drums, give Neutron a spin with vocals, bass, guitars, and synths as well.