A creative audio agency, Audio UX wants to “sonify your story.” Based in New York, the team behind Audio UX believes that there should be no arbitrary sounds in experiences that include audio—that everything a listener hears, whether on a brand’s website, watching a movie trailer, or playing a game wearing a virtual reality headset—ought to be purposeful in communicating a story.

And while Audio UX designs sound and creates original compositions for brands like Cole Haan and SpinCar, one way that Audio UX tells their own brand story is by creating EPs showcasing the sounds they are capable of producing. Their latest EP, RUIN, showcases sounds recorded in abandoned spaces where they captured samples and impulse responses before composing soundscapes with Iris 2.

“We’re able to take these sounds that may not even sound tonal and instantly create a playable instrument” says Audio UX co-founder Eric Seay. “That’s huge for us.”

So download the free Iris 2 presets and patches, listen to their three-song EP that was created using this pack, and read more about how these sounds were created below.

How have you used Iris in your Audio UX work? What do you like about it?

Audio UX: We’re always looking to create totally unique and ownable timbres, especially for UI sound-driven initiatives, and the spectral selection allows us to do just that. Recently, we used iris alongside the free library of space sounds that NASA released to isolate the “beep” sound of the Sputnik satellite, eliminating all the digital breakup and low-frequency space-rumble that came along with the recording. We were able to create Earcon gestures with this quick, futuristic texture for a space-themed proof of concept.

For activewear brand Ethona, we iterated deeply on the creation of an ownable vocal texture. We used Iris to manipulate vocal recordings, create unusual loops during playback and layer in synth textures and samples to beef up the sound of the vocals and lend a unique quality.

Where were these samples and impulse responses recorded?

Audio UX: Traversing abandoned asylums and sanitariums is often times frowned upon in the eyes of the law, so without getting too specific, our team embarked on some legal adventures in the tristate area to empty buildings with cavernous halls and hollow infrastructures. 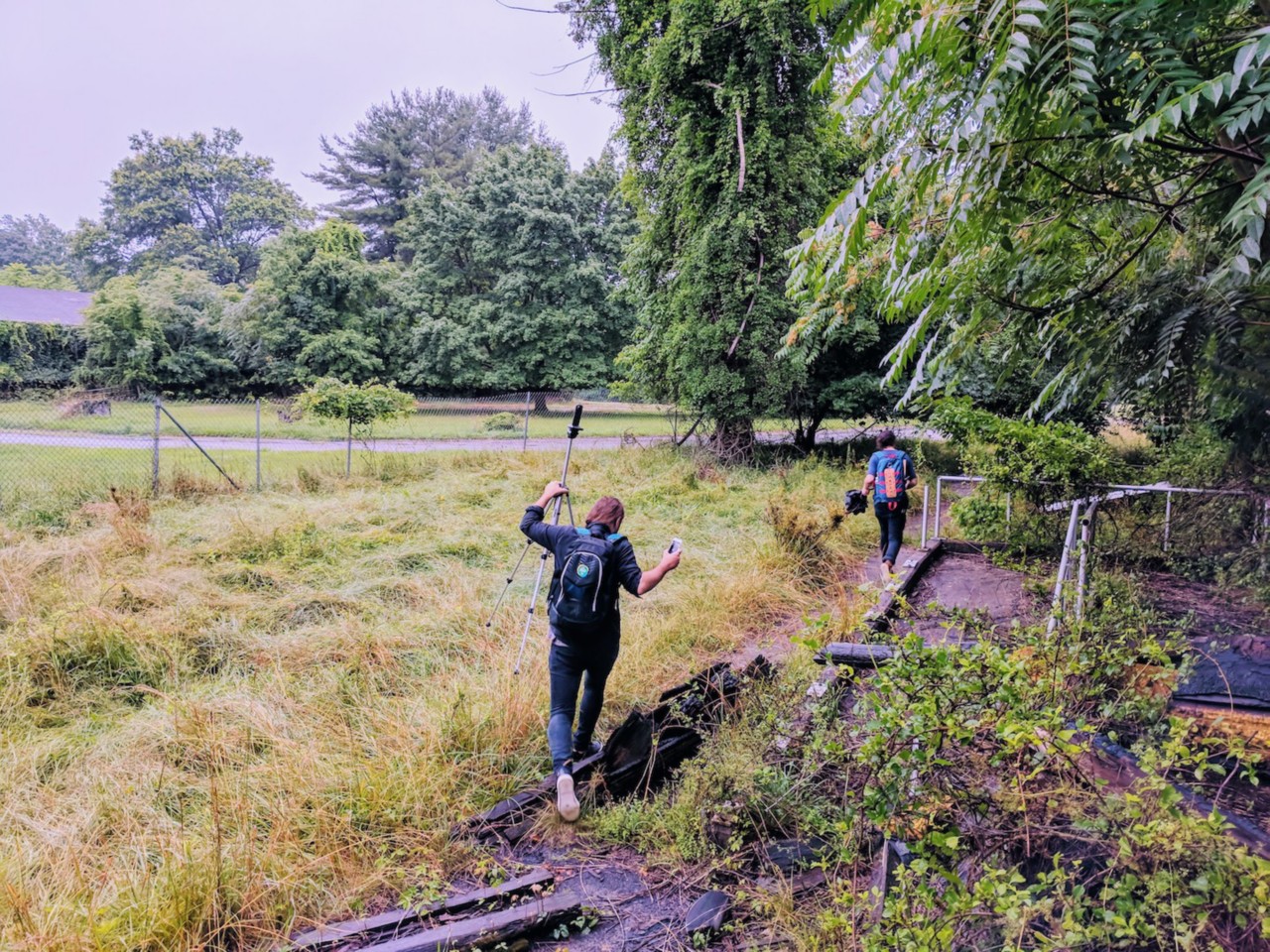 How did you record them?

Audio UX: We set out with our field recording gear, including several Zoom interfaces and Sennheiser shotgun microphones, to record the samples at the source. Additionally, we came equipped some percussion tools like sticks and brushes to begin drumming up our industrial rhythm section.

Initially, we had planned on primarily using this time to generate noise sweeps & pops to capture impulse responses that we would later use for creating several convolution reverb spaces ranging from unfurnished foyers to vacant sleeping quarters. Once we started sampling whistles and using them to craft the rudimentary pads on “Ruin”, we took that to the next step in working with iZotope Iris 2.

How were these samples used on Ruin? Any specific moments to point out that people should listen for?

Audio UX: All three of the tracks were built using the samples we recorded as much as possible. We agreed on that creative limitation from the start as a means of both honoring the spaces we were recording and making sure the music felt like it was from those dark and forgotten places. It was important to us that the samples and the spaces themselves informed the aesthetic direction of the EP. The most obvious place to hear the samples come to life is in the drums and percussion. For example in the first half of “End of Line,” there’s a percussion element that emulates a tambourine, but it’s really just us recording the sound of kicking an old bed frame with broken bed springs. Every timbre that made it onto the EP was approached just like the broken bed frame.

Besides the accompanying EP, what types of projects do you foresee (or could you foresee) using these samples on?

Audio UX: These samples have a very dark and rich sound profile that could work very well ranging anywhere from trailer risers to a film score itself, industrial music, as well as varying genres of electronic music. At the end of the day, art is about inspiration. Whether we’re inspired to load one of these patches into a session, or whether a patch itself inspires us to create an entirely new musical work, we have no doubt they will find their place. Either way, we’re really excited to have had the opportunity to have worked with such a unique software to create a thematic preset pack.

Preset names are usually pretty wild. From “Wrath of Light” to “Incinerator,” these are no different! How did you decide to name these presets? And what role do you think preset names play in why the user decides to use them?

Audio UX: Any artistic project we dive into needs to have depth in the concept. It’s rewarding for us to drive aesthetic meaning into our initiatives, and ultimately rewarding for the end user to have an enriched imaginative experience with our product.

These names were chosen carefully based on the initial, almost synesthetic, reaction to the sound of each patch with consideration for the story of Ruin. Maybe it’s because of our natural predilection towards film scoring, but every name references some kind of cyber-dystopian/post-apocalyptic/multidimensional storyline where, someplace in spacetime, the future has been ruined. Some names include “Cartesian Romance” based off La Jetée (1962), “Akira’s Choir” based off Akira (1988), “Babeldom Gypsy” based off Babeldom (2012) and Lost Steinway based off Lost Highway (1997). 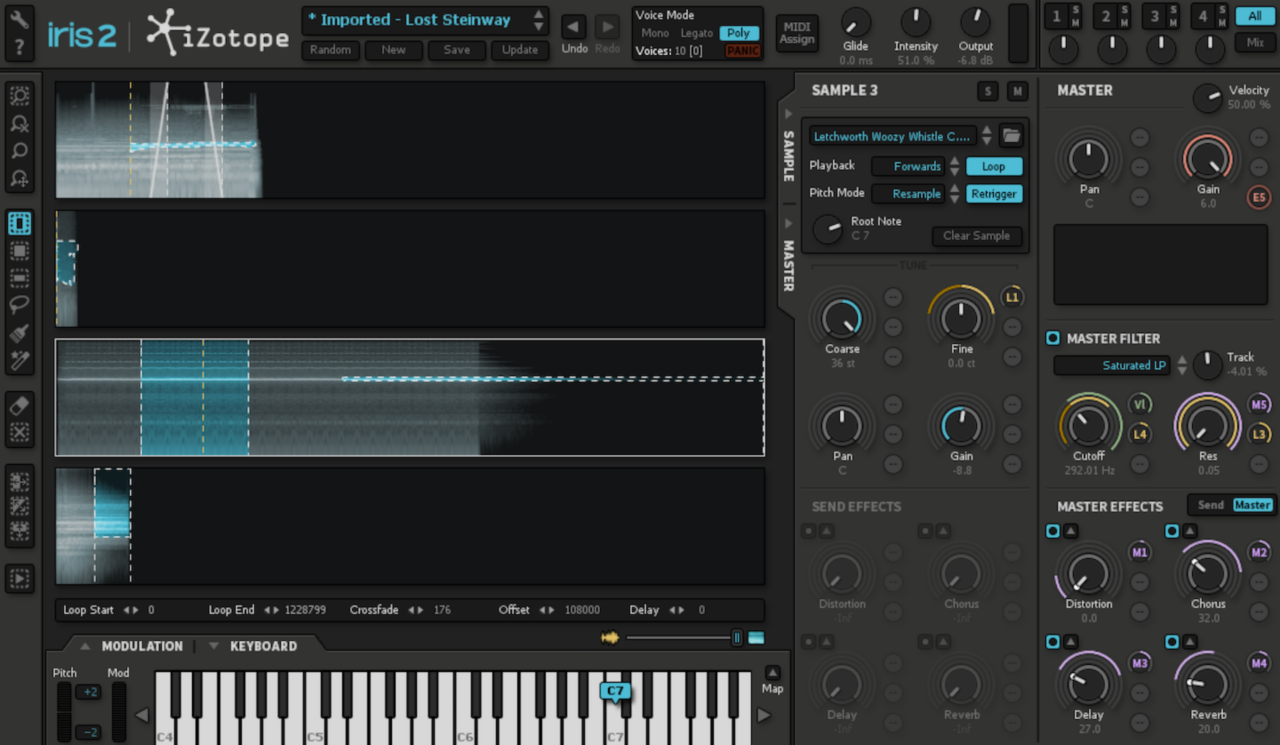 Audio UX: Hopefully, users can detect an aesthetic associated with the sounds and names to transport their imagination towards making other-worldly compositions. Being the synth patch adventurists that we are, a name like “As I Float Down The Iridium River” feels slightly more enticing than something like “Bell Pad” as it implies a story yet untold.

Users should also look out for meanings in patch names unlocked by the mod wheel. For example, the mod wheel in “Aquatic Artifacts” filters the vinyl crackle sample to sound like an underwater soundscape, and in “5th Dimension” the mod wheel affects an ambisonic field recording that lends a sense of multidimensionality to the patch.

Knowing these were made with care, users can feel inspired by utilizing these instruments, iterate on their sonic makeup and illuminate their own stories.