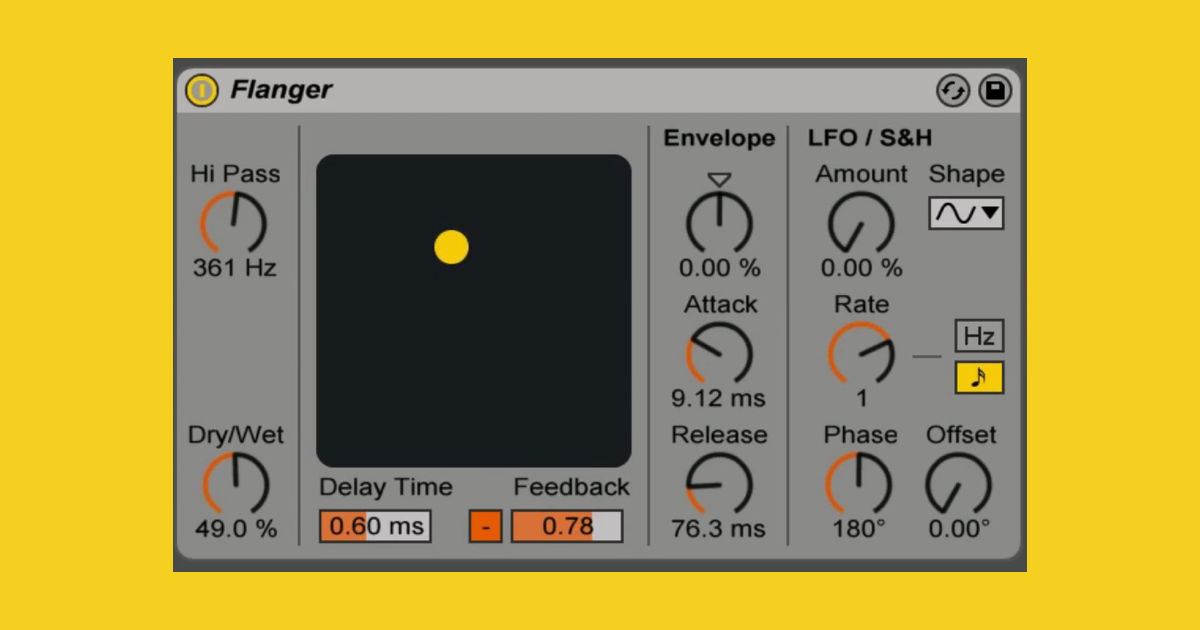 There are a handful of DAW effects that are considered integral parts of modern music production. Think of reverbs, delays or compressors—it’s rare that a record will be produced without them.

Flangers don’t get the same kind of love. They remain misunderstood, underused, even mocked. And it’s kind of easy to see why. Flangers produce an instantly recognizable sound, making them something of a novelty effect. Listen below:

But there are many reasons why a flanger should be in your producer tool kit. They can easily be used alongside other common DAW effects to produce complex and unique results.

Flangers work by splitting a sound source into two exact copies and delaying one, then altering this delay over time. Even though they will still be heard as a single sound, the timing differences between the two copies will cause phase cancellation, leaving small gaps in the frequency content.

The result: a sweeping, “jet plane” sound, heard on everything from the hi-hats in A Guy Called Gerald’s “Trip City Mambo” to the bass guitar in The Cure’s “The Holy Hour.”

To get a better idea of what flangers do, it’s worth spending some time experimenting with what’s available in your DAW. I’ll be using Ableton Live’s default flanger. It provides a parameter set similar to what is offered in other audio software, including Logic Pro and Reason. 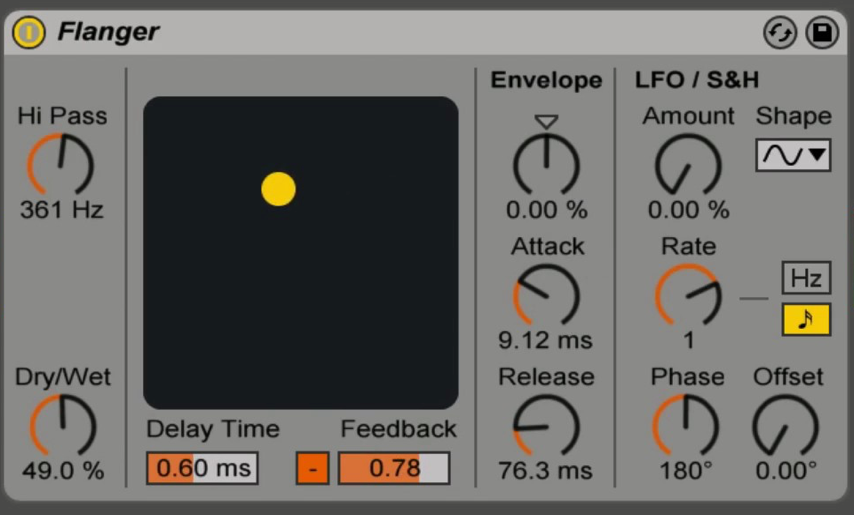 A low frequency oscillator (LFO) is the primary characteristic of a flanger—it’s amount and rate determine the intensity and speed of the sweep. Used along with delay time, feedback and envelope controls, you’re equipped with a range of parameters to shape and modulate the flanger sound.

For those seeking something simpler, consider a production suite like Nectar, which comes with a variety of stripped down effects (including the flanger) made to be used together. 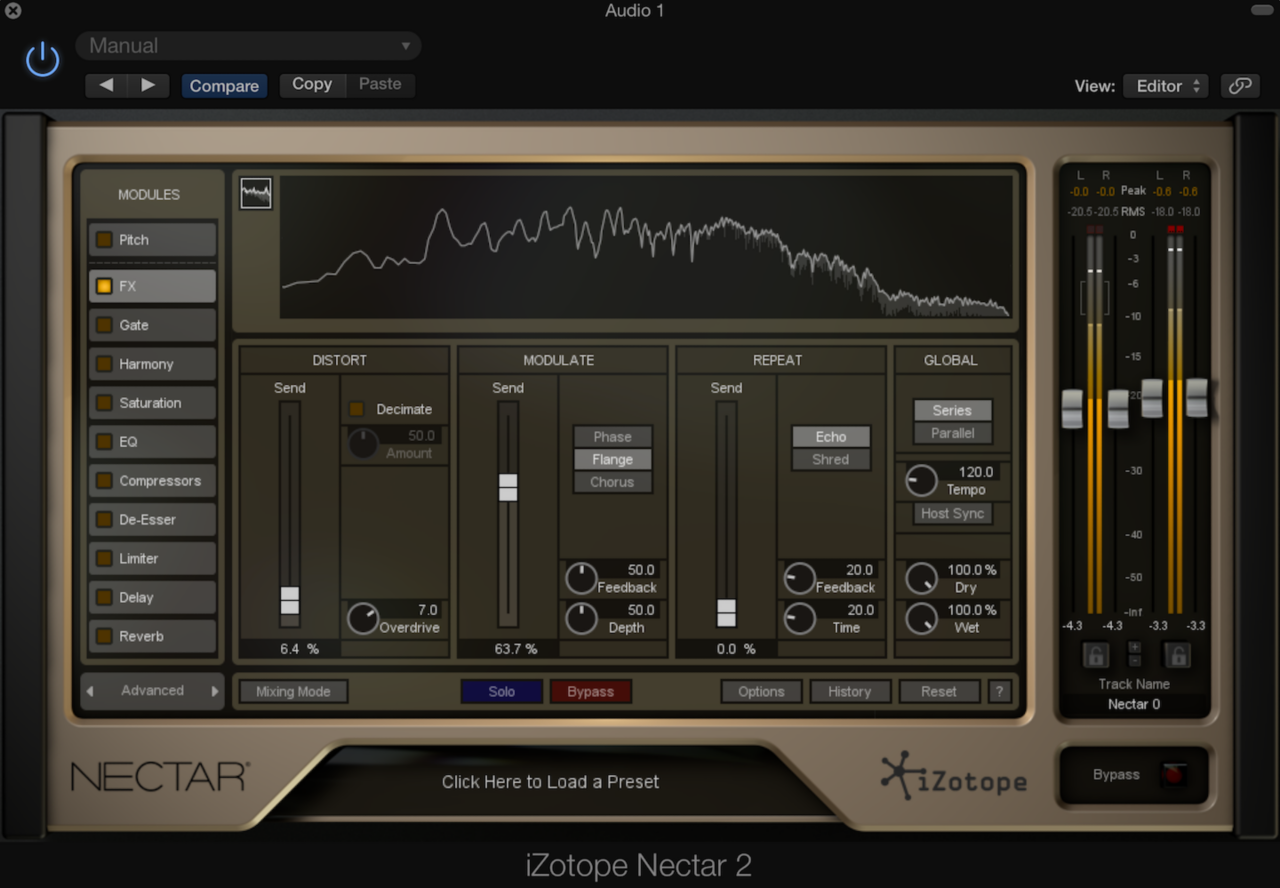 So, what are some practical uses for flangers? Let’s find out.

Going over the top with any effect is usually a bad idea, and this is especially true with flangers. As you heard above, they can sound pretty goofy, but when used in small amounts, flangers add a sense of movement and a unique character to hi hats.

Here’s a simple disco house beat without any effects.

It’s a start, but the hi-hats are too static. Add some spark with a flanger by automating decay time—the flanger will sweep up and down the frequency spectrum, creating a pitched rise and fall effect. The result is more lively, and the beat sounds like it’s leading toward something. Here are two different versions:

For the sake of demonstration, I turned up the flanger higher than I normally would. In your own productions, once the effect starts to sound obvious, dial it down a bit. That’s the sweet spot where the flanger sounds best.

The word “deep” is thrown around a lot when discussing electronic music. While there is no set definition, it’s often used to describe music that is atmospheric, warm, and subdued.

Using a flanger on pads is a great trick for achieving this sound. They typically bring out the nuances of longer sounds, creating an “evolving” feel.

Listen to this recording of an Alpha Juno without any effects:

And now with a flanger, adding in hi pass, delay time, and feedback automation:

The pad takes on a spacey, underwater sound and the automation creates chirpy, bird-like sounds in the background, caused by frequency notches.

Flangers can also be used as a powerful and unpredictable effects units. They’re great at generating quirky sounds that wiggle and twist.

Loop a short MIDI sequence that triggers a sample at the start of each bar. I used a tom sample in Ableton Live’s Simpler. While recording, manually (and drastically) change the flanger LFO rate right as the sample is triggered, then repeat this process with delay time, feedback and waveshape. The recorded automation for each parameter should look something this this:

Notice the automation peaks and dips at the start of the bar? These quick changes stretch and twist the sample in multiple directions at once, resulting in playful bursts of color.

Flanger on a Tom Sample

I particularly like incorporating these types of sounds into drum machine led music like electro or techno. They’re great for transitions and can also be used as percussion.

Exploring uncommon or unloved effects is great way to get inspiration and differentiate your sound. Flangers offer a wide amount of parameters that can be manipulated to create sounds ranging from subtle to extreme.

With a bit of experimentation, you will hopefully come to appreciate the flanger and find a way to fit it into your producer toolkit.