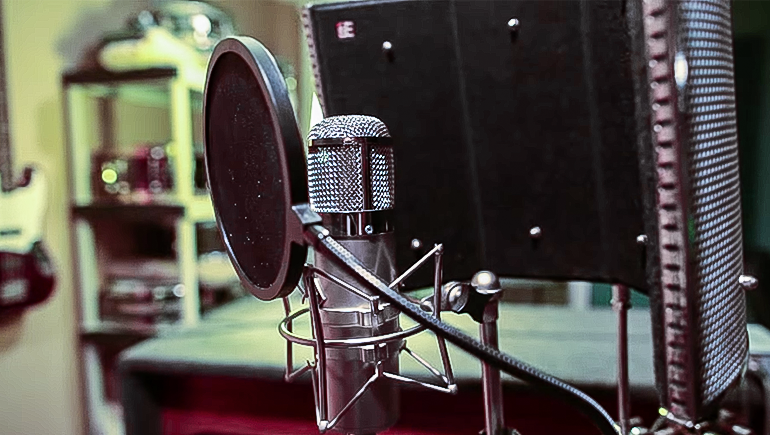 Tricks and tips for finding weird vocal effects that set your songs apart.

Guitarist/producer Jim O’Rourke once said that he rarely used reverb on his records because it had become “culturally loaded.” He wasn’t kidding. Reverb, echo, and compression have become part of the “professional sound” we’re all supposed to aim for. Suddenly we realize that James Hetfield, Trace Atkins, and Beyonce all have basically the same vocal sound! Since the lead vocal is usually the lynchpin of the song, the place to launch a counterattack against homogenous music is in your vocal production.

Push your vocals over the borderline.

Boundary microphones used to cost $20 at Radio Shack. These condenser mics on metal plates made the leap from conference rooms to home studios. A pair of boundary mics listened like human ears, and everyone who used them had their own secret recipe for getting the BEST SOUND EVER: taping one to the ceiling above a drum set, rolling one up in a tube made out of carpet, or attaching one to a wall parallel to the neck of an acoustic guitar.

Times have changed: the secret’s out, and these mics cost $399. Fortunately, you can use the boundary effect by placing a mic diaphragm 5-10 mm from, and perpendicular to, a flat surface. You can experiment with different mics (as well as different walls) using this method, singing directly against the wall several feet away. The distance eliminates bursts of air caused by dreaded letters like S and P, and also reduces the proximity effect we’re used to hearing with cardioid microphones. The resulting recording might sound a bit thin on its own, but could actually sit really nicely in a mix.

The mega-mic. The earbud swarm.

One of the easiest DIY hacks around? Turning the woofer of a three-way speaker into a microphone. All you need to do is sacrifice a mic cable and connect the wires (speaker black to cable black, speaker red to cable white) and you’ll have a mic suitable for bass drums and speaker cabinets. Almost anything that makes noise can become a microphone when used in reverse.

This includes headphones and even earbuds. When repurposing headphones, no mods are needed: just attach a quarter-inch adaptor and plug them straight into a board. You’ll look silly singing into a big stereo speaker, or surrounded by hanging earbuds (use several, since the diaphragms are tiny and you’ll get cool stereo imaging with a group). But the tones are worth it. The low input volume of these mics works beautifully for high-SPL sources like drums and cabinets, but you might need to crank up a preamp to get enough gain on your vocal.

By chance, you might discover somewhere with astonishing acoustics. Hopefully, it’s an indoor location with electricity. But what if it’s a less convenient spot, like some isolated forest grotto, or a courthouse stairwell? If you’ll have to record stealthily or without power, you need a portable recorder. But that’s a lot of money for a niche studio gadget.

Luckily, you have a cheaper option: your smartphone. You can take advantage of location recording by bringing your tracks with you on an mp3 player (or your friend’s phone), sticking an earbud in one ear so you have a reference track, and singing into the phone’s mic. Holding the phone at arm’s length will help the onboard mic pick up ambient sound. Later, fly your phone sound into a mixer, combine it with your backing tracks, and adjust as needed.

Clone your track in stacks!

This trick is something weirdos like Frank Zappa or Devo would have tried, if they’d had access to modern DAWs. Lots of singers like to sing close harmonies with themselves or record lots of identical tracks. These techniques help establish a vocalist’s signature tone.

But what about tracks that are literally the same? Lay down a single vocal track, then clone the take onto another track and use your mouse to move it 20-100 milliseconds away. You can do this as many times as you want, creating a house-of-mirrors effect with your vocals that gets even crazier if you pan the duplicates to the extremes of the stereo field. Moving the duplicates further away from the original can create an echo effect, or a “reverse echo” that anticipates the track.

Remember Twin Peaks? For a dream sequence on the chronically odd TV show, a character’s lines were written out phonetically, but backwards. For example, “music” would be written as “Kiss-Yoom”. After the actor spoke these lines, they were digitally reversed. The results were more Uncanny Valley than Twin Peaks, sounding creepy in a way that was hard to grasp or explain. Has anybody ever tried this with sung vocals? Someone should. Digital workstations make these sorts of tricks easy, and we don’t use their perverse powers often enough.

When it comes to stacked vocals, most artists focus on unisons, or harmony. But you can also play with  intensity. What sorts of vocal timbres can you achieve by adjusting your delivery? Try singing the same track at a normal volume, in a scream, then a whisper. Then blend them together, equalizing the levels on all three tracks.

Of course, you can add harmony, too, resulting in effects from silky to sinister, depending on which track is out front. Keep your tracks as rhythmically identical as possible, making sure each note starts and ends in unison, to avoid sloppiness. But with practice and a little compression, you’ll sound like an angel. Or a demon.

Digital reverbs have settings for halls, churches, and stadiums. Ever notice that there are no settings for smaller spaces? What about the settings for “lavatory”, “coffin”, or “Cadillac Deville trunk”? You can record in tiny spaces, creating intimate performances that are dry of reverb or echo.

You can also create even smaller spaces. For example, you can nail a cardboard box to the wall, open side down, and sing standing inside. The last time Bad Brains went on the road, unpredictable singer HR performed while wearing a motorcycle helmet with an internal mic. He probably shouldn’t have left it on for the entire tour, but it was a neat idea.

And sometimes a crazy idea forms the bridge to genius.