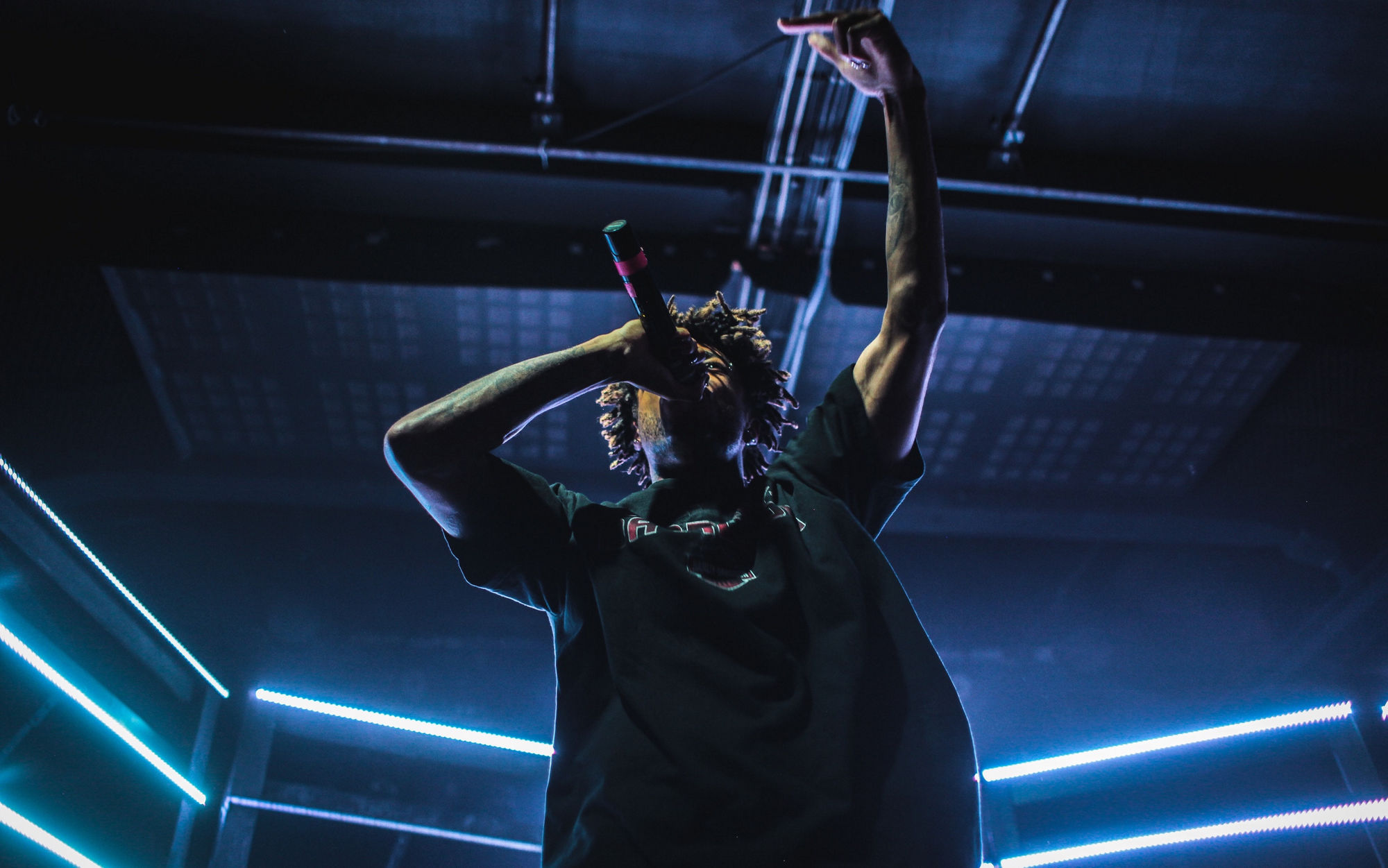 Hip-hop has evolved over time into specific subgenres that carry their own specific nuances and idiosyncrasies. Like the “yinz” of Pittsburgh or the “Hoosier Twang” of midland America, the differences in the subfactions of hip-hop, like rhythm patterns or vocal phrasings, are just different ways of communicating similar messages. In a time where rappers are kings and queens of the Top 40, hip-hop vocal production is a dominant leader in the industry in terms of creating cutting-edge and engaging material.

With such an emphasis put on hip-hop vocals today, it’s important to understand how to best capture your own voice to rise up amongst a saturated crowd. In this piece, we’ve recruited NYC-based rapper Akil B. Strange to help share some helpful tips for recording hip-hop vocals in Spire Studio, while briefly touching on the differences between vocal production in select hip-hop subgenres.

90 percent of your recorded vocal tone is a direct result of the microphone you’re using. Understanding its function and how it best records audio in your space is crucial in tracking the perfect vocal take.

There are three major categories of microphones: ribbon, dynamic, and condenser. Ribbon microphones are usually the most expensive, but capture the widest range of frequencies. Their recorded sounds can be described as smooth and detailed. Dynamic microphones, like the common Shure SM57 or SM58, tend to capture a warmer sound. Condenser mics, like the one built into Spire Studio, capture a brighter sound.

Generally speaking, ribbon and condenser microphones are preferred for capturing hip-hop vocals simply for their ability to interpret a larger range of frequencies. This doesn’t mean that dynamic mics aren’t a good choice; they still do a great job capturing clean and well-balanced audio.

Be aware of the proximity effect

Ever notice how the low end of your voice pops when you get closer to a mic? Well, this is what’s called “proximity effect,” and it plays a crucial part in tracking vocals—specifically hip-hop vocals.

Most microphones will emphasize frequencies below 200 Hz when you breach a certain distance threshold. The peak warmness and ideal weight of a spoken vocal tone lies between 300 Hz and 600 Hz. Therefore, proximity is a huge factor in the natural EQ of your recorded vocal.

When recording hip-hop vocals in Spire Studio, you’ll want to be meticulous with where you place your mic—granted, you will need to experiment with placement depending on the register of your voice. If you don’t have a pop filter, it’s recommended that you get one: not only does it block unwanted consonant sounds and hissy vocal frequencies, but it also acts as a point of reference for microphone proximity. Try placing your pop filter between two and three inches of the grill of your microphone—this should serve as a solid starting point.

You can hear the proximity effect more prominently in the golden age of 1990s hip-hop when rappers like Q-Tip approached the mic with a more reserved, poetic demeanor, hence, a closer, more intimate take with the microphone. Listen to the difference between Q-Tip’s warmer vocals and Fife Dawg’s more mid-range vocals on A Tribe Called Quest’s “Electric Relaxation”—much of that dynamic difference has to do with Q-Tip’s proximity to the microphone.

Akil experimented with the proximity effect on the 90s-inspired example below to bring out the low end of his voice in his verse.

Warm up your vocal chords

If you’ve ever tried tracking several takes without warming up or coming into the session cold, you’ll notice a drastic difference in volume, dynamics, creative approach, and consistency between the first take and the last. Keeping your takes consistent will help with production and mixing down the line, and to do so, vocal preparation is a must.

Four things rappers need to pay attention to when performing are annunciation, breath, cadence, and pitch. There are exercises for each of these things that will help you maintain consistency in recording while enhancing your overall delivery.

Annunciation: For annunciation, simply recounting the alphabet while adding “and” between each letter (for example, “A and B and C and…”) will prepare your mouth to properly shape vowel and consonant sounds.

Cadence: For cadences, finding your way around tricky tongue twisters is an excellent way to prepare for navigating your own flow. Try repeating this one before tracking: “You know New York, you need New York, you know you need unique New York”.

Pitch: Pitch is an aspect of rapping that many rappers will take for granted despite its necessity in every rap song. Take Kendrick Lamar for example; on “Backseat Freestyle” from 2012’s Good Kid, M.A.A.D City, Lamar plays with pitch in nearly every phrase of the song, often employing specific melodic notes for certain words in a phrase, or by placing a perfect fifth harmony overdub over his flow in the verses. To warm your voice up for pitch accuracy, try rapping your verse in a register both higher and lower than where it feels natural to you—this will open up your vocal chords in preparation for tracking.

Before you start tracking, think about the creative direction of your song while browsing the vocal effects in Spire Studio. While it’s generally wise to keep hip-hop vocals dry, a touch of reverb can help them sit in the mix more comfortably. And don’t count out the creative possibilities with effects like Wormhole or Rowdy—effects like these can come in handy for overdubs for added drama.

Subgenres of hip-hop like cloud rap and punk rap use vocal effects generously, like the reverb/delay saturated vocals from Yung Lean in “Lightsaber // Saviour” and the distortion tinged verses in Ho99o9’s “Bone Collector.” With the rise of the subgenres on social media, vocal production in hip-hop is finding an opening as a bona fide form of creative expression.

Every producer puts some sort of compression on lead vocals in hip-hop songs to boost the clarity and body of the voice. Seeing as we cannot add compression in Spire Studio, the next best solution is to use Warm Voice—it comes with built-in compression.

Try turning down both the Character and Amount toggles to avoid oversaturating the lead vocal with reverb. You should notice a substantial boost of warmth in the vocal tone.

Check out Akil’s vocal tone on the beat below—we used Warm Voice to bring out the warmth in his voice for an overdriven trap beat.

Capturing a great hip-hop vocal take relies heavily on the vibe in your headphones.

Having an imbalanced mix, or even something as simple as the mic not being loud enough, can cause a mental block when recording. Comfort is key when capturing a great take, and an instant fix to mental or physical discomfort is adjusting your headphone mix.

Spire Studio’s Visual Mixer allows for easy mixing on the fly. After you’ve tracked a vocal take, try placing it elsewhere in the mix to give your ear a better idea of where the next vocal take will be placed.

Get the perfect lead first

More so than most genres, hip-hop uses vocals in multitudes. You have your lead vocal and chorus melody, vocal harmonies, doubled/tripled verse phrases, character voices, group voices—the range of the voice in hip-hop is vast. But before you go and try capturing every hip-hop vocal you can think of, try concentrating on the lead vocal first.

Getting the perfect lead vocal first is constructing a solid foundation to build other ideas upon. Take the time to get your lead feeling comfortable and settled, then try doubling/tripling phrases in your verse before adding any final voices on top. You can then work in any vocal harmonies if you have a chorus melody to support.

This step is all about allowing yourself to have the right footing going into production.

The example below is a beat inspired by the current club/west coast hip-hop sound. We crafted all of Akil’s vocal overdubs and lead doubles/triples after taking our time finding the ideal lead vocal track to build upon.

Save tracks for overdubs

In lieu of the last tip, save at least three tracks in Spire Studio for overdubs—they’re essential in the vocal production phase of hip-hop.

Assuming you’ve imported a beat into Spire Studio to record your vocals (see more on importing a project here), you should have seven tracks remaining at your disposal. What you do with these seven tracks is entirely up to you, but try to save at least three of them specifically for overdubs. Layering overdubs on a lead vocal will add body and depth to your entire project.

If you’re feeling a bit lost as to effectively using your tracks in Spire Studio, try this method:

Recording hip-hop vocals in Spire Studio is simple, but with these tips, Spire Studio can elevate your process to an efficient professional-quality production. Starting by understanding the dynamic range of your microphone, and use the proximity effect and vocal warm-ups to bring out the best in your voice. Then use the magic elements of Spire Studio (like the recording effects and Visual Mixer) to create a strong foundation to build upon. Finally, focus on your lead vocal takes and overdubs to produce a high-quality hip-hop recording that’s a cut above the rest.