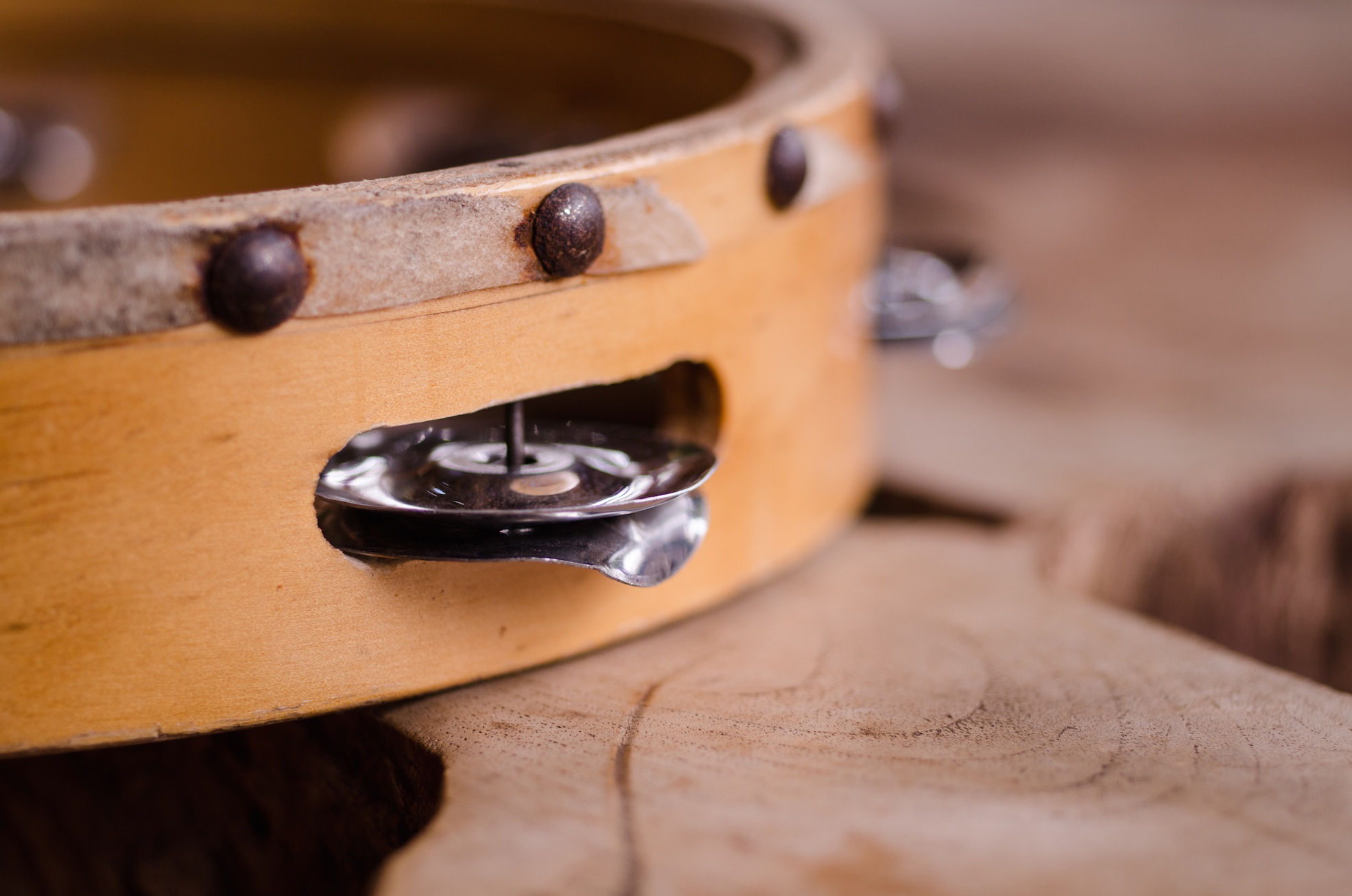 Percussion may be the most overlooked element in recorded music (especially for the non-drummers out there). But try taking a listen back to some of your favorite recordings and it is more likely than not that they will feature percussion in some form.

While percussion may often be relegated to the auxiliary pile in our brains, it can actually be critical to the groove, feel, and vibe of a song, as well as a powerful tool when songwriting, arranging, and recording. So whether you’re just picking up the drums or if you’re looking to add some spice and groove to your music, percussion might be just what you’re looking for.

Let’s dive in and take a look at a few of the most common percussion instruments and how you can use them to make your songs more compelling.

We’ll start with a plain drum groove as a basis for our percussion instruments:

PRO TIP: You can record a demo of all of these percussion instruments we’ll be discussing with the free Spire app for iOS to see what variations you like best in your music.

The tambourine may be the first thing to come to mind when we think of percussion, and for good reason. From The Beatles to today’s Top 40, you can find the tambourine at almost every turn. That’s because the tambourine is an extremely powerful and flexible instrument—it can be used to play along with and reinforce a rhythm, accent certain beats with one-off hits, and even be used to make a rattling sound effect. When used tastefully, it brings a lot to the table. And simply put, nothing compliments a drum set quite like a tambourine does.

Let’s give a listen to a tambourine complimenting our drum groove: 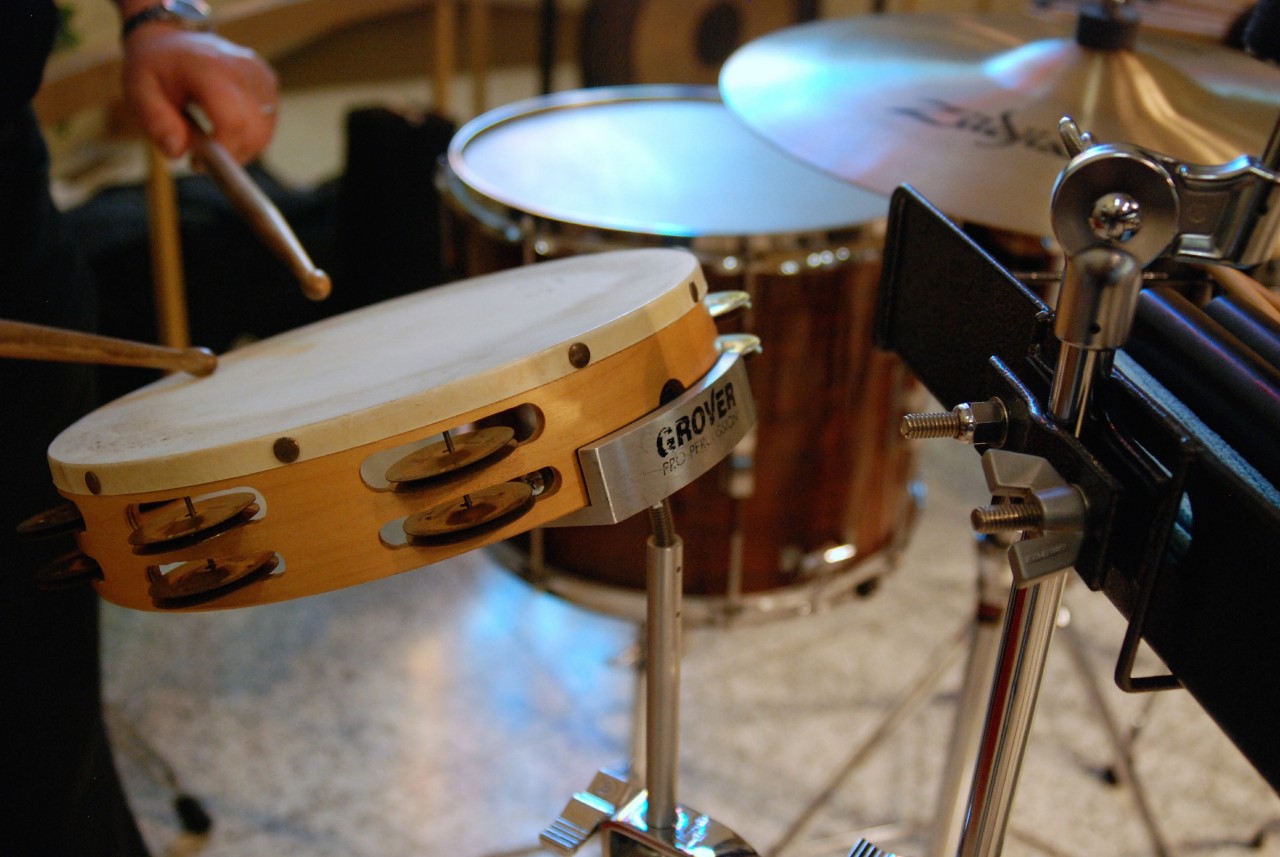 The shaker is another quintessential percussion instrument. Smoother than the tambourine, it can be used in many of the same contexts when a lower-key sound is called for.

Now here is a shaker playing along with the drum groove:

Note how in this case the shaker has a similar effect as the tambourine but with a different timbre. We can think about how these different sounds might work in different contexts; perhaps a shaker could build to a tambourine as a song progresses and calls for more clearly defined accents.

Best of all, you can usually pick up an egg-style shaker (that’s what’s recorded here) from your local music store for less than $5—you could even make your own out of household items. This is something every songwriter and producer should have in their arsenal.

Claves are a percussion instrument originating from latin music that have since made their way into many kinds of pop music. They consist of two wooden sticks that make a “click” sound when struck together.

Here is a pair of claves playing along with our drum groove, accenting each quarter note downbeat for the first two bars, and then playing a clave rhythm for the last two:

Hear how the claves add a driving feel to the groove when playing along with the downbeat, and then how they give it a vastly different feel when playing the clave rhythm. The claves may not have as many obvious applications in pop music as other percussion instruments, but they are an excellent choice to add a driving force to your song or to change up the feel.

If you don’t have an actual pair of claves on hand, you can also make do with a pair of drum sticks or other wooden sticks that you might have around. Try them out and you may be surprised!

So here’s a vibraslap along with our drum groove:

While the vibraslap doesn’t add a new rhythmic layer to this drum groove, the sound effect accents the downbeat almost like a crash cymbal would, but with a different feel.

An interesting fact about the vibraslap is that it is actually the modern day equivalent of “the jawbone,” which is literally the jawbone of a horse or similar creature that has been dried so the teeth rattle—luckily today’s equivalent is a little less morbid!

Hand claps can add a great accent to important beats in your music. Usually used on the upbeat along with the snare drum, claps can add a certain oomph and liveliness that you might not know you’re missing until you try it out. Claps are great when used to bring energy and impact to your chorus, bridge, outro, or even the whole song.

They tend to work better on more lively recordings; just as sad ballads might not get the audience clapping, claps can feel a bit out of place in these contexts.

You can hear in this example how the handclaps bring considerably more impact to each snare hit on beats 2 and 4.

Pro tip: the familiar sound of hand claps is created by a combination of the sound generated by your hands’ impact and the reflections and reverberations of the environment that you’re in. So when recording claps, try experimenting with your hands at different distances from your microphone to get a good blend of room sound—if you record your claps too close to your microphone, you may find they sound more like a “click” than the timbre that we’re all familiar with.

And don’t forget to layer a few takes (one clap would be a lonely party!). This example has three claps combined and panned left, right, and center.

Foot stomps (like hand claps) are a little self explanatory, but can also be a great addition to your music. A familiar sound from folk-influenced genres, stomps can be a great tool to create an earthy, authentic feel. Stomps have a low timbre that makes for a sensible placement on downbeats, where you may have a kick drum (many times it’s on the first and third beats).

Here are some foot stomps added to our drum groove:

In this example, the foot stomps can be heard both coinciding with the kick drum and accenting other beats where the kick drum does not play. Together, the stomps add a great organic push to the kick drum, and on their own, the stomps present another timbre in the lower register to the groove.

Now let’s see how all of these pieces of percussion sound together with our groove:

You can hear how percussion has transformed this relatively simple drum groove into almost entirely something else. The rhythm is faster (now 16th notes when the original beat was 8th notes), the energy level is higher, and the vibe is livelier. But this isn’t to say that you should just add all the percussion you can everywhere—think about how each element could fit in your song, and also where it might not fit. As a songwriter and arranger you can use percussion to help take your listeners on a journey, so try using percussion to complement and enhance the eb and flow of energy in your songs rather than just going all-out from the get-go.

Next time you’re working on a song, having some percussion up your sleeve can be just the thing to take your groove to the next level.

Don't forget that songwriting and arranging are all about how everything works together, not just about each instrument on its own. So think about how percussion can complement other parts of your arrangement and vice versa. There are many ways percussion can bolster your songs, from strengthening a groove, to creating dynamics between song sections, to adding textures and vibes, and beyond.

One great bonus about percussion is that compared to other instruments, they are typically relatively inexpensive. Plus for some instruments if you don't have one on-hand you can frequently find samples online (although usually nothing beats an actual performance). And hey, stomps and claps are free!

And remember, all the examples here are just one way you can use each of these instruments to enhance your music. Experiment for yourself and take your grooves up a notch!