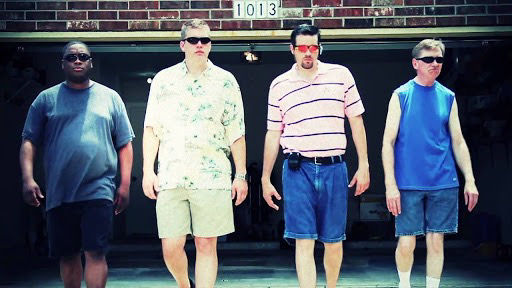 Dad’s are in right now. If you have a thriving 401(k) and something to connect the back of your sunglasses, you’re almost there. The only thing you’re missing is a soundtrack to your life.

Music speaks to the core of all dads. This dormant volcano was once a fiery molten pit of emotions, fueled by beer and Bruce-knows what else. This Father’s Day, strap on those cargo shorts, load those finger guns, and get ready to rock. These are some of our favorite dad rock bands.

Dads are Bruce’s children. With so much raw machismo, it’s hard not to take a trip down Thunder Road once in a while. Windows down, wind blowing through what’s left of their hair: pure Dad nostalgia from the land before kids.

There are two factors that elevate Bruce above your run-of-the-mill rock superstar. One is the E-Street Band. Clarence Clemons and the E-Street Bruces is what this band should be called in my opinion. Nothing can replace the Big Man and that wailing horn, not even his nephew. Danny Federici, keys and accordion. This guy rigged an electric keyboard to a glockenspiel so he could play the glockenspiel, like a boss. The 1984 addition of guitar player Nils Lofgren was a big lifestyle add. His solo stuff is the real deal. Lastly Patti Scialfa, Bruce’s now-wife, rounds out the E-Street band. Not only does she shred guitar and vocals, the husband-wife rockstar dynamic tugs the heartstrings of dads everywhere.

The next factor that sets Bruce apart is that he’s a goddamn poet. It’s the New Jersey epics that take a hit and run dad listener and turn him into a lifelong fanboy. Live From Asbury Park is an album that particularly demonstrates this style. “For You”, “Does This Bus Stop at 82nd Street?”, and “Lost in the Flood” are great examples. Finally poetry we can relate to.

If there’s anything your dad wants to hear out of a cheap transistor radio, it’s the strain of Van Morrison’s timeless voice. Blasting onto the scene in 1967 with “Brown Eyed Girl”, Van came out of the gate real strong. His next two albums Astral Weeks and Moondance are definitely his most iconic. There’s something magnetic to dads about Van Morrison. My recipe for dad catching makes use of this fact.

Set the transistor radio to Van Morrison. Set the bucket of beer close by, ensuring the ice is fresh. Place the beer nuts next to the bucket of beer. Write “Free” on the sticky note and put it on the weed wacker strings. Catches 1 in 3 dads.

The reason why this recipe works is because of Van’s relatable songwriting. Dads don’t always have time to get deep. Van’s songs are usually pretty simple with lots of catchy melodies and great instrumentation. You don’t have to burn through triple A’s to love Morrison’s glorious delivery. In the course of his prolific career Sir George Ivan Morrison was not only knighted, he released 40 albums on top of that. Its facts like these that cement Van into the heart of dads everywhere.

We’ve all checked in to the Hotel California before. It’s pretty nice even though we can never leave. The fatherly music coming from the Eagles’ permanent courtyard gig is enough to get any Dad a toe-tappin’. (Pro-tip: don’t order the wine).

Don Henley’s vocals activate a hidden chamber of dad physiology. Somewhere between the cerebellum and the heartstrings there’s basically a locked door. If Don Henley’s voice doesn’t have the key, I don’t know what does. This is the command center of the paternal nervous system, and there happen to be a lot of gears. Luckily the sound of these gears won’t drive any dads crazy because they might just be “Taking it Easy.”

Thanks Don Henley! Shoutout to responsible rambler Jackson Browne for writing that song.

4. Steely Dan: The Weird Side of Dad Street

Art school dads need an outlet too! Few bands have the shrouded mystique of Steely Dan. Their often virtuosic compositions are peppered with a drastic spectrum of lyrics, from hilarious to cryptic to total nonsense. It’s not clear what makes this odd fare such a staple in a dad’s musical diet, but perhaps variety is the spice of fatherhood.

Coming out of Bard College, with at least one song that references NYU, artsy dads can unite under one flag of Steely Dan. Composed of powerhouses Donald Fagen and Walter Becker, The Dan is rare in the fact that one of their later albums is as good (or better) than their early stuff. While Becker passed away last year, he got to see his album Two Against Nature bring home a GRAMMY in 2000. Against artists like Radiohead and Paul Simon, that’s a solid accomplishment. One notable dad who’s a fan of Steely Dan is Kanye West. “Champion” samples “Kid Charlemagne” and was a hit back in 2009.

Despite their relatively compact* discography (9 studio albums), Steely Dan packs a density of greatness that is hard to match. With albums like Aja, Pretzel Logic, You Can’t Buy a Thrill, and Two Against Nature, dads have plenty to listen to when they need their fix of opaque jams.

*compared to Van Morrison—guy’s a savage

Deep Cut: “Any Major Dude Will Tell You” | Pretzel Logic

Counting Crows are a notable dad band because they’re probably one of the first bands your dad listened to once he was actually a dad. Most other dad rock is like a portal to the golden years, but Counting Crows is like “alright, I’m dealing with this mortgage pretty well” music.

I think Counting Crows are kinda goofy, but their redeeming songwriting brightens this corner of the dad rock universe. For one, their cover of Joni Mitchell’s “Big Yellow Taxi” is pretty solid. In fact the rest of that album Hard Candy is some of their best work. Other standout albums are This Desert Life and of course August and Everything After. I think Dads gravitate to the distinctive twang of Adam Duritz. There’s something classic in his voice and characteristic melodic runs. Dads know classic.

Overall it’s easy to write off Counting Crows, but then your dad will put them on and teach you a thing or two about the nineties. Once your Counting Crows train gets rolling you can’t put them down.

Album: August and Everything After