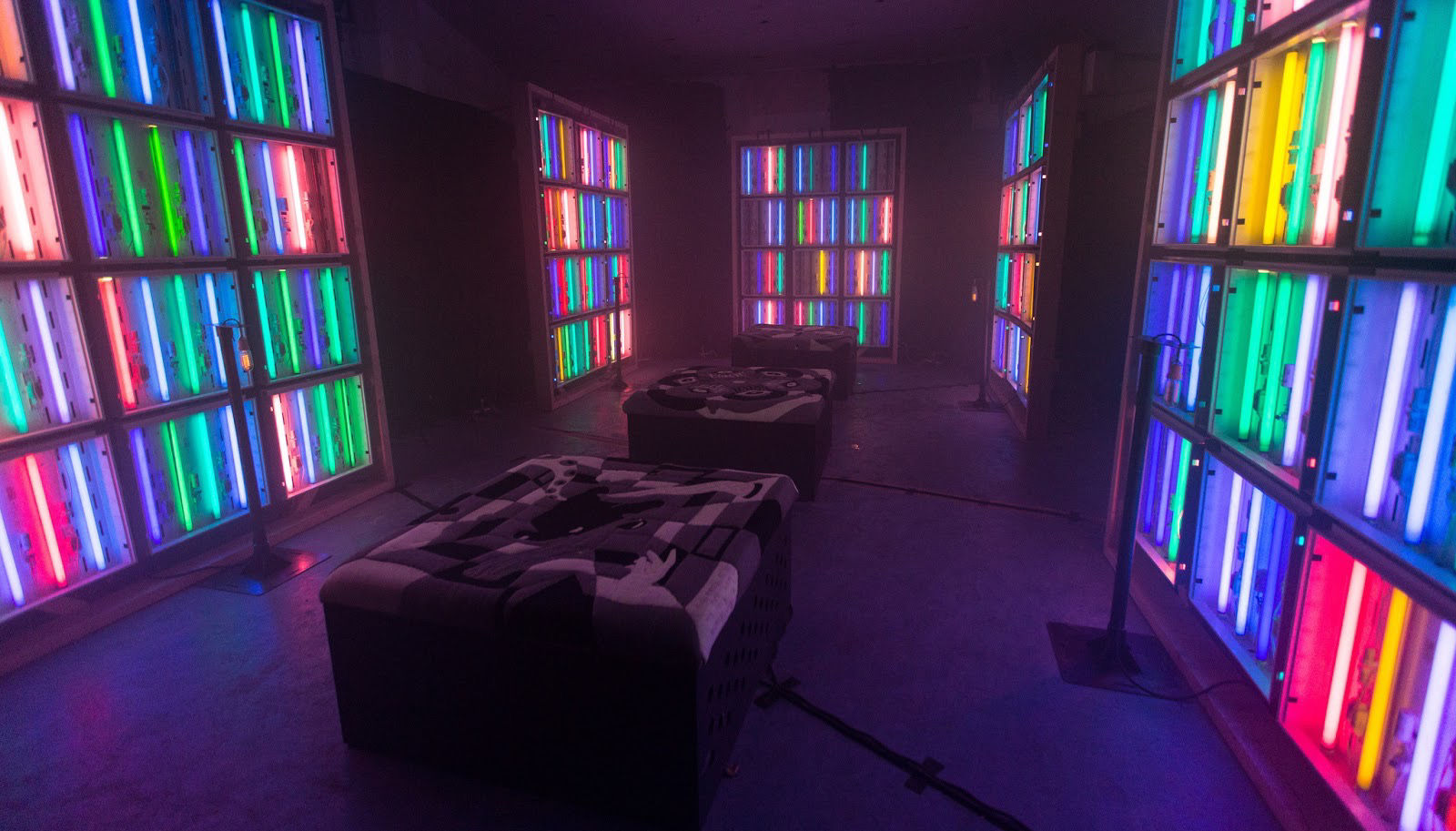 Over the last few decades, great technological leaps have allowed musical artists to create mind-bending visuals and sound. Music software like Max MSP, which is essentially a digital modular system for creating complex sounds, allows musicians and producers to do things that would have been unimaginable in previous decades, such as generative music (tunes created by algorithms), whether in a studio or live setting. On the visual side of things, software like Cinema 4D, Houdini, and Blender allow musicians and their collaborators to create complex and stunning 3D animations.

Yet, despite advances in audio technology, most artists’ live concert experiences have remained the same: stacks of speakers playing tunes to an audience. It’s not that this traditional experience is obsolete, but that many artists aren’t incorporating advances in sound as much they are quantum leaps in vision.

A number of technologists, musicians, and sound artists are challenging the historical arrangements of live sound. In short, these artists are working to make sound more immersive. That is, music or even just experimental sound that can do things like envelope the listener with high decibel wall of sound vibrations, like My Bloody Valentine did on their 2008 tour, or as Bjork did on her Biophilia tour, when she located the stage at the center of venues to create a more immersive sonic (and visual) experience, so audiences could move around it.

Below are a few others artists who are working on the cutting edge of sound. It’s important to note that the technologies these artists are using aren’t exactly new. Some might be more recent innovations than others, but the key is that the artists are conceptually ambitious enough to combine them with their music, and bring into the live performance experience.

Electronic musician Max Cooper pretty much lives on the cutting edge of sound and vision. Every project, every release, and every concert seems to be an opportunity for the very cerebral and inquisitive artist to explore the technologies percolating at the moment, and bring them into the realms of recorded music, visuals, and live performance.

Back in 2014, Cooper dove into 4D sound, allowing audiences to hear sound from multiple angles. The result was 4DSOUND, a 48-speaker immersive sound rig built by the Dutch company 4D Sound, which Cooper described as an “alternate reality.”

The 48 speakers were placed on 15 cylinders. Each cylinder featured three clusters of speakers: one at about waist level, one at the height of a head, and one overhead. Each of the cylinder bases, mounted on steel platforms, created very low bass frequencies.

As I wrote of Cooper’s 4DSOUND in 2014, one set’s opening track might sound as if it were raining, with Cooper producing an effect of thousands of raindrops falling throughout the room’s space. In another track, he might manipulate the 4D system to create “physical walls that move through space.”

“The 4D system, and a lot of the work I do with my music in terms of spatiality and trying to create immersive spaces and structures within them, has to do with psycho-acoustics and the power of sound to create our perception of the reality we're in,” Cooper said. “The idea is to create an alternative reality that can be very beautiful, relaxing, jarring, and even uncomfortable, but still an interesting experience that can communicate a new idea.”

It’s been a few years since Cooper’s 4DSOUND, but he was on to something with it. The show hinted at a future of speaker systems that far exceed conventional wisdom of how many speakers should be used, what type, where they should be placed, and in which spaces.

Electronic music pioneer Suzanne Ciani has been at the forefront of immersive sound for decades. While Ciani has, quite rightly, been known as an expert synthesist, especially when it comes to the Buchla modular system, she has long been a proponent of quadraphonic sound, insisting on using it for her live performances.

A quadraphonic sound system makes use of four primary speakers placed at a venue’s four corners. The live music is thus split into four channels, allowing the sound to move around the audience in a way that just isn’t possible on a stereo sound system. It’s similar to what people are accustomed to hearing in cinemas for a movie like Star Wars: sound coming from all directions sides at different intervals, traveling in diagonals, overhead, and in various other directions.

The big stumbling block to live, immersive quadraphonic sound is the will to do it, as well as the money, which smaller venues probably won’t have. But Ciani loves using quadraphonic sound systems with her modular synthesis sets.

But even then, quad can be difficult. Each venue has a different shape, so the quality of this whirlwind of electronic sound also varies from space to space.

In a sense, Brian Eno has always been on the cutting edge of sound—recorded sound. But with Empty Formalism, Eno radically reimagines live shows as immersive environments.

Now, Empty Formalism isn’t your typical live performance. The first a/v installation commissioned by the Berlin-based Institute for Sound and Music’s ISM Hexadome at Gropius Bau in Berlin, Empty Formalism is essentially an audiovisual performance that will tour the world. Eno, along with his frequent collaborator, Peter Chilvers, created an audiovisual work that takes advantage of ISM Hexadome’s hexagonal structure, which features six large screens and over 50 speakers in a 3D soundstage. The setup allowed Eno and Childers to create a spatial arena, so to speak, for experiencing music and mutating visuals.

There are nine other immersive audiovisual performances and installations in the ISM Hexadome, including a team of Thom Yorke and 3D visual artist Tarik Barri, as well as Holly Herndon and Mathew Dryhurst (more on them below), but this isn’t Eno’s lone immersive sound project. Back in 2006, Eno unveiled 77 Million Paintings, a generative audiovisual installation that runs on software that creates new arrangements of visuals and sound in real-time, each and every time it is shown.

Eno and Chilvers also just debuted Bloom: Open Space, a mixed reality installation, which makes use of Microsoft’s mixed reality headset, HoloLens. It allows listeners and viewers to interact with visuals, and essentially orchestrate a piece of music within the space around them.

As with Ciani and Cooper, Eno—and indeed the other artists in the ISM Hexadome program—is exploring spatialized sound. That is, how can a given space, whether it’s the Hexadome or an abandoned factory, be exploited to create a new and dynamic sound experience? And then, of course, how can this sound be further augmented by visuals? This is what seems to be interesting Eno most these days, not the traditional pop or electronic music record format.

With Sigurðsson on electronics, Byrne playing his viola da gamba, and other musicians playing certain other instruments, the pair blended baroque music and modern minimalist electronic music. Sigurðsson’s electronic drones fused with Byrne’s stringed instruments to create an immersive form of ambient music, and in surround sound to boot.

The music itself wasn’t exactly cutting edge, being of past and contemporary varieties, but the very idea of experiencing music in such a communal way, in a restful and even sleeping state (for some), certainly challenges conventional notions of what a live concert can be. Such an immersive performance is the type of thing we might see in the coming years. Not that we will all be watching and listening to musical performances in communal beds, but that musicians and performers will radically rethink how audiences will experience their shows, whether it’s in a similarly restful state, or even in a more intense spatial and bodily arrangement.

Like Eno’s Empty Formalism, Holly Herndon and Mathew Dryhurst created an immersive installation for the ISM Hexadome. Titled Spawn Training Ceremony I: Deep Belief, Herndon and Dryhurst’s interactive concert involves an artificial neural network “baby” that listens to the voices of its creators, as well as those of the audience, and improvises to create new and abstract compositions. It sounds a bit like Pete Townshend’s abandoned concept for the Lifehouse project, where the audience would play a part in creating live electronic rock in real time, but of course with a spatial sound system to make the overall experience more immersive.

“For this first training ceremony, our ensemble members will lead exercises to help Spawn model and understand the world around her,” write Herndon and Dryhurst. “We will recite text together, sing and emote together, and collectively produce sounds for her to witness, understand, and later interpret for an installed piece in the Hexadome.”

“The training will be run by a cast of characters modelled to represent emerging and competing archetypes within contemporary battles over data collection and network training, so that Spawn might gather a greater understanding of the new world in which she has been born,” they adds. “This process challenges us to ask ourselves, are we the parents or the children in this new epoch? Are we training our own systems to enact our ideals, or are we rather being retrained to serve the opaque purposes of others?”

Sure, it’s high concept. Creating a live performance that makes use of cutting edge sound systems and spaces is great, but articulating the reason for its existence, and why it is being performed in the first place, can be just as important. In the future, maybe most concert experiences, small or large, will be similarly high concept.