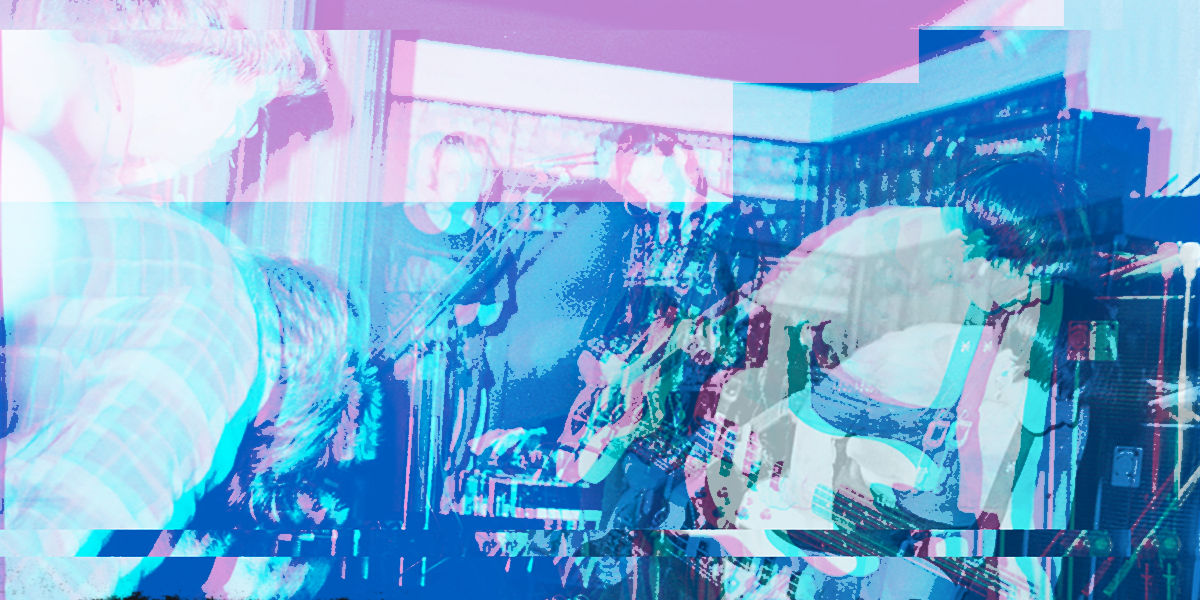 Shoegaze is predicated on gauzy walls of sound. There are reverb-laden swells, blistering distortion, and lots of delay, often all at once. My Bloody Valentine is undoubtedly the most iconic, but bands like The Jesus and Mary Chain, Cocteau Twins and Spacemen 3 certainly helped lay the genre’s sonic foundations. Other bands, like Slowdive, Brian Jonestown Massacre and Ride—all still going strong—offer their own unique takes on the shoegaze sound; some more ethereal, others owing more to 60s psychedelic and Britpop.

While the hallmark effects of shoegaze mentioned above are fairly constant, it’s really how you apply these to melodies, chord progressions, and rhythm that matter. Beyond that, the shoegaze spirit is one of experimentation, whether it’s the beautiful white noise of MBV and Lovesliescrushing or the dreamier side explored by Slowdive, which influenced the likes of Beach House and Ulrich Schnauss. Below is a starter course in achieving some shoegaze sounds, with the hope that you go forth and experiment on your own.

1. Blend effects with a tremolo arm

A way to replicate some shoegaze sounds is to use Trash 2 and DDLY, along with some reverb in your preferred DAW and/or with hardware effects. But in this clip, we leave the reverb out, just to highlight that it’s not always necessary.

In Trash 2, we set the fuzz to Tape Saturation and dropped the Drive and Gain down a  bit from their default settings. On DDLY, we set one of the delays to Analog on 1/16 time, 71% feedback, 20% Trash, and a near-completely wet signal. The other delay is on Grain and pitch-shifted to +5.5 st. (semitones), with 13% feedback and sitting at 84% in the Mix. While playing the chords, we bent the tremolo arm, much like how My Bloody Valentine’s Kevin Shields does when playing. Using the tremolo arm in this way blends the two delays and the tape saturation’s lights fuzz into amorphous sound.

An important lesson in being inspired by shoegaze is this: don’t limit yourself to guitars. Get creative. Use synthesizers, other instruments, and even samples to create shoegaze textures.

As above, effects like delay, distortion and reverb do wonders for creating shoegaze textures, and the same holds true when these are applied to synthesizers. A synthesizer’s LFOs can even simulate effects like tremolo and vibrato, which is good to keep in mind when designing your sound.

In this clip below, two ambient notes, sampled from a Korg Minilogue analogue synthesizer, are played on an Elektron Digitakt with some white noise and reverb. It’s already somewhat shoegaze-like, but not noisy enough. By adding some DDLY and Trash 2 effects, we’re really able to create a more blistering wash of sound.

Synth with DDLY and Trash 2 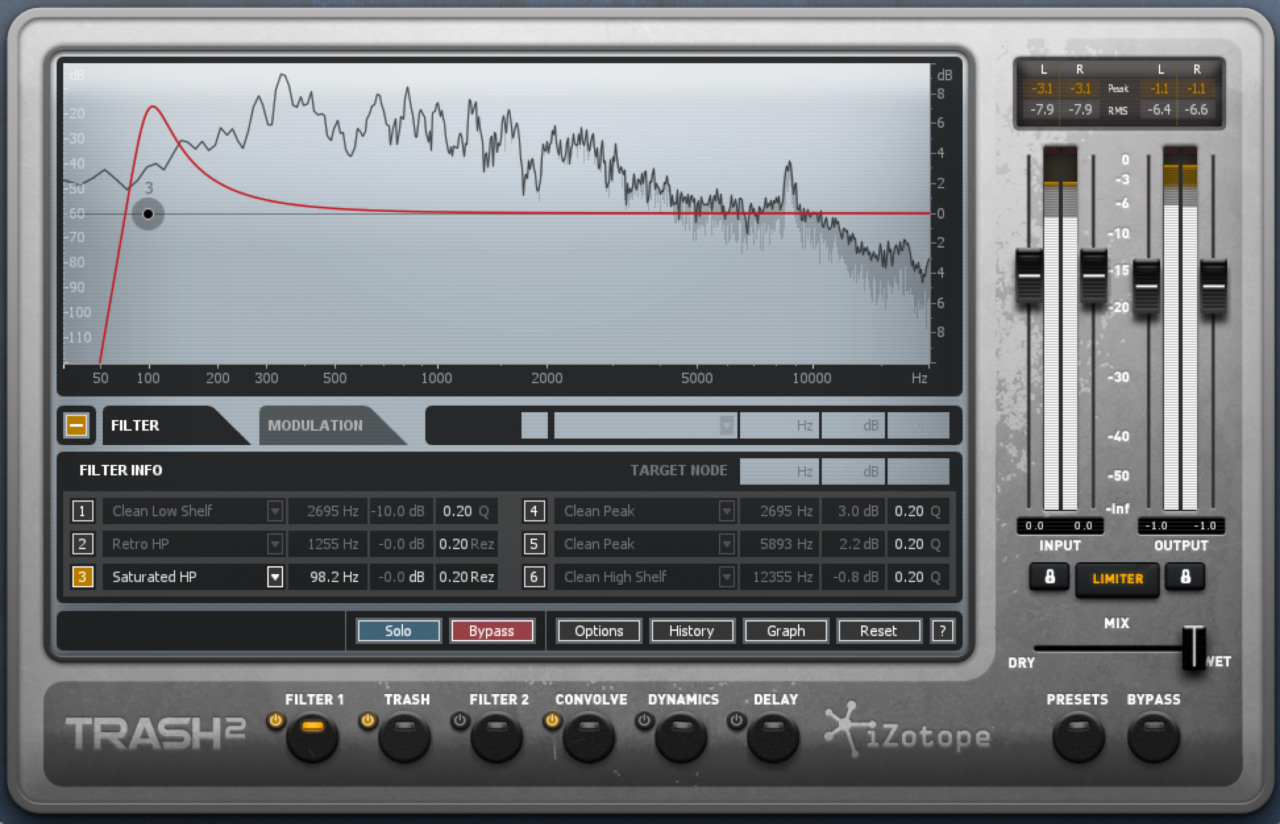 In Trash 2, the Filter is active with Saturated HP, while the Trash feature is set on Retro - Plateau. This, however, was quite abrasive, so we activated the Convolve feature, setting it to Mechanimal - Tortoise, which acts like a second filter of sorts and dampens the sound. 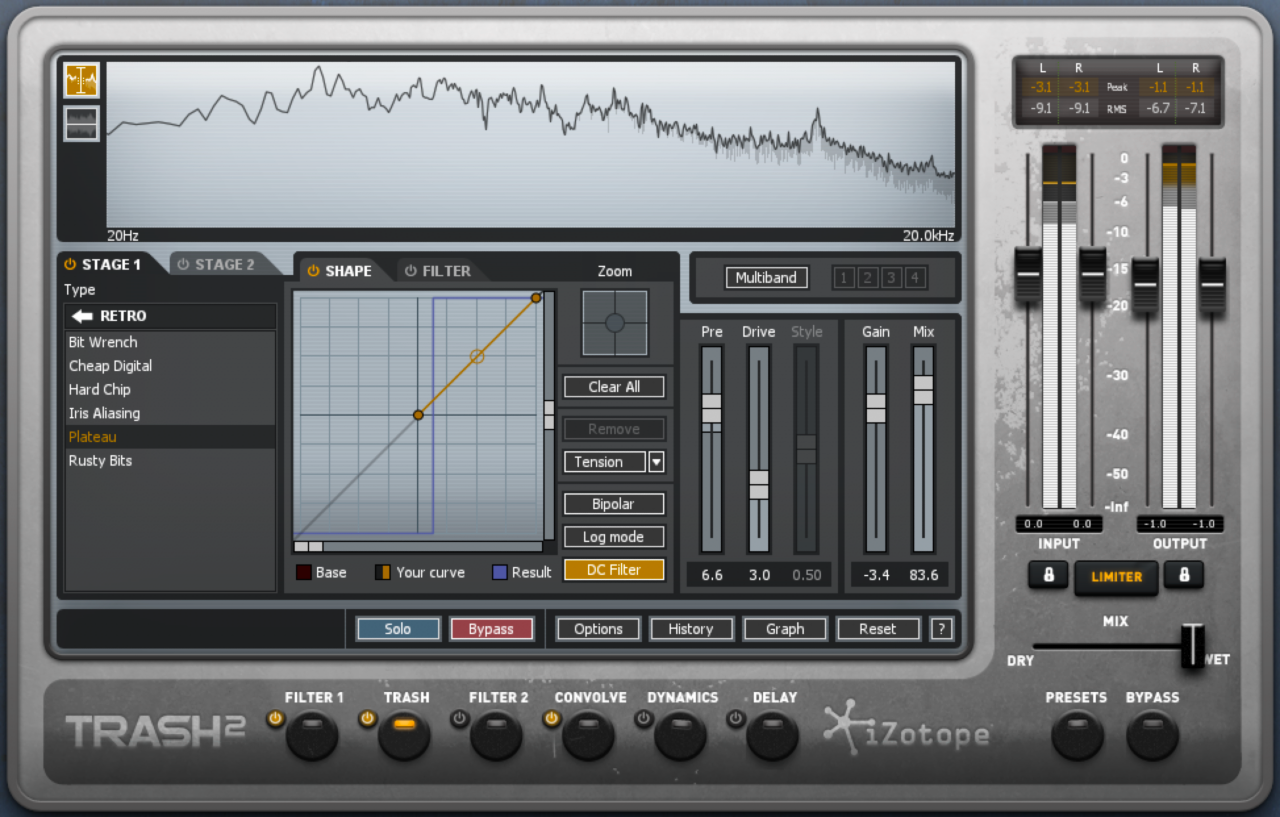 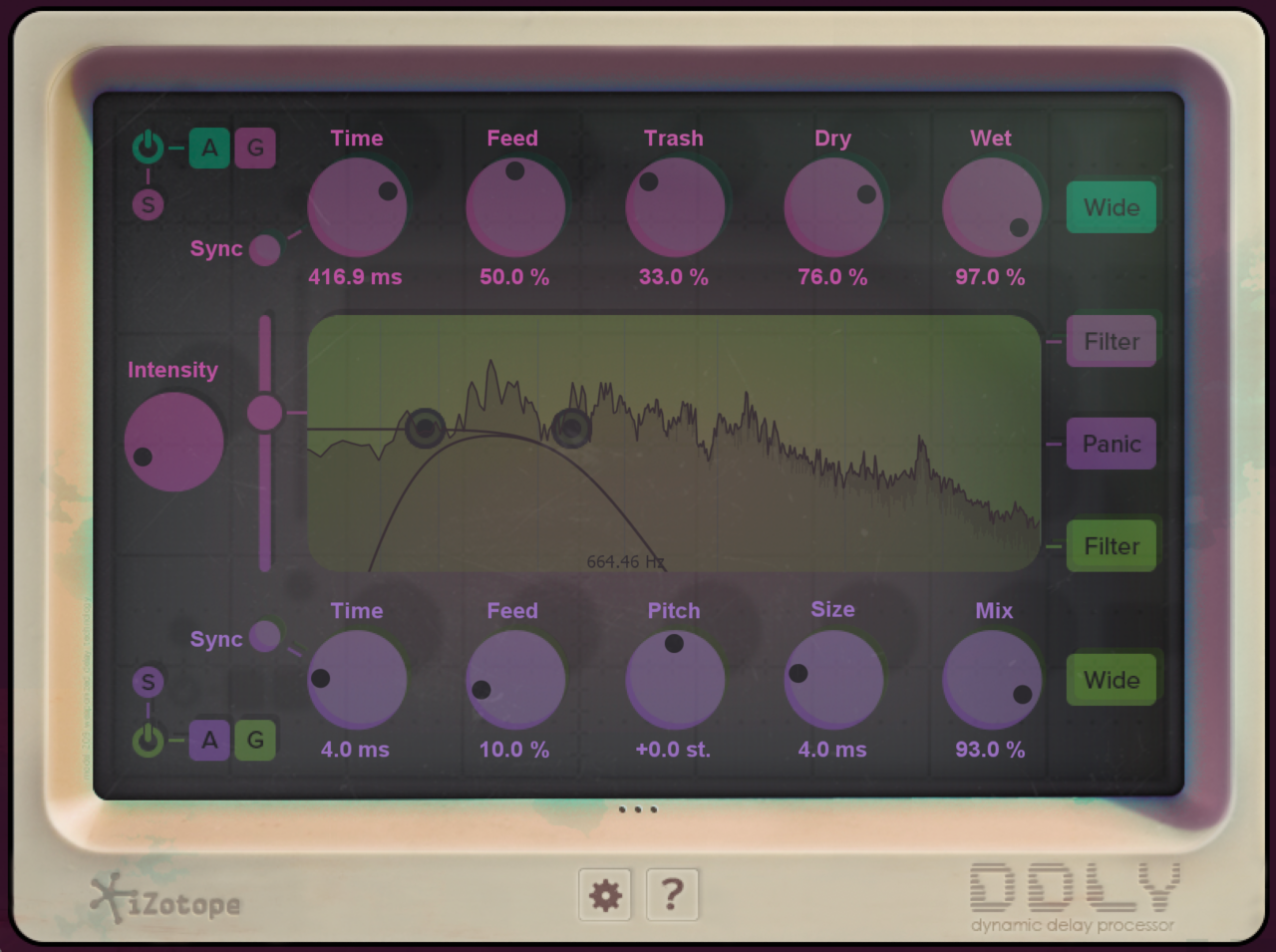 If there is a song that stands as a monument to delay, it might just be Slowdive’s “Souvlaki Space Station,” the centerpiece of their 1994 album Souvlaki. The band’s main songwriter, Neil Halstead, said he was attempting to write a dub song. (Dub, incidentally, is a musical genre that makes great use of delay, so be sure to soak up some of those tunes.)

With “Souvlaki Space Station,” Slowdive really didn’t create a dub song, but they did create a tune that is completely drenched in delay and reverb. The result is a track with percussion and guitar notes that seem to be folding back in on themselves.

In our clip below, we add two types of delay in DDLY to our guitar, which also has some digital plate reverb in the dry signal. The first delay is Analog. It’s set to 300.8 ms with 56% feedback, 41% trash (to liven up the sound a bit), and a near-completely wet signal.

We also played around with the Delay and Grain filters, which is a fun way of controlling the overall tonality. The overall effect is something like what Slowdive did in “Souvlaki Space Station.” 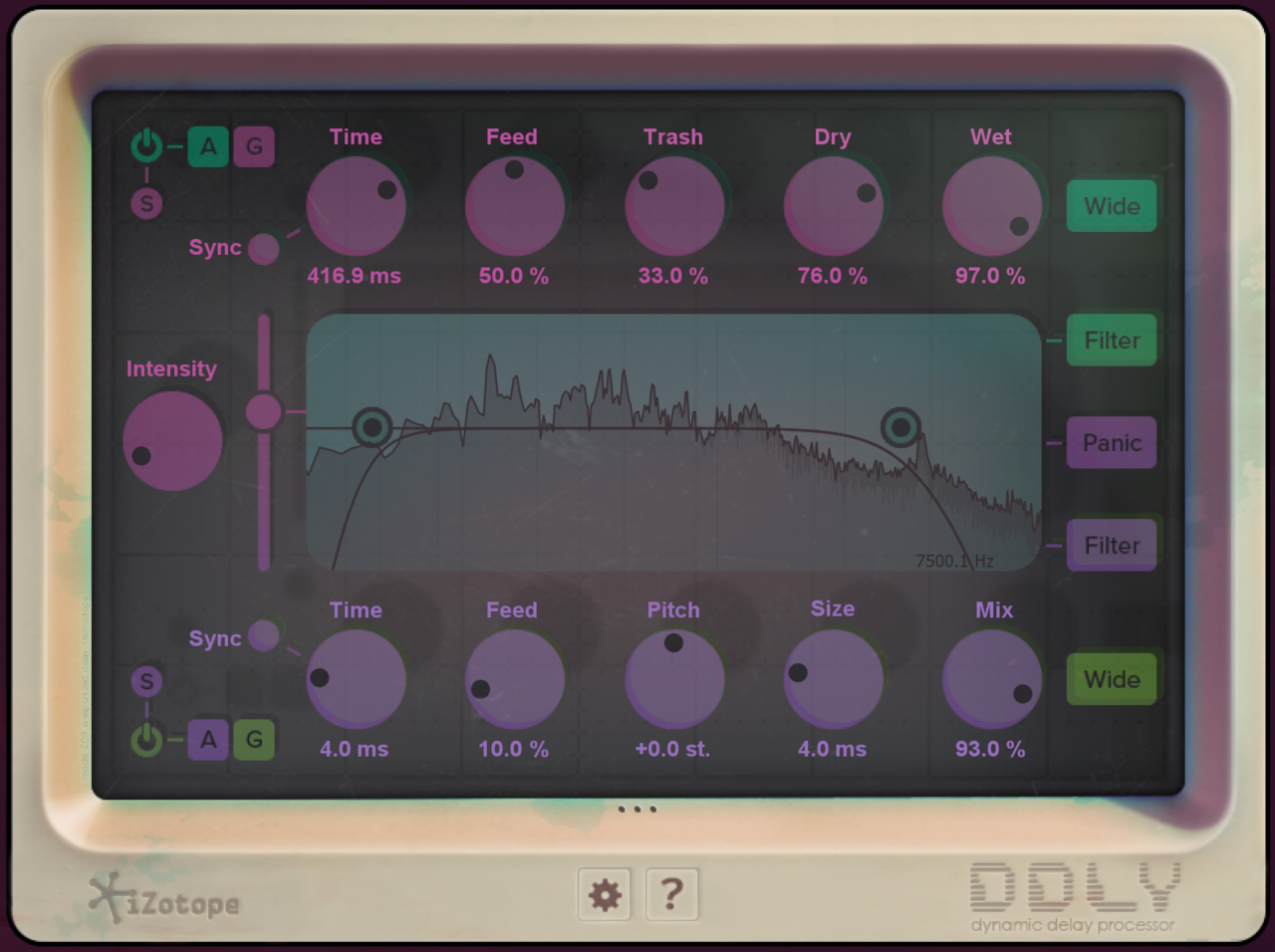 Once again, the other delay is Grain at a time of 943.0 ms, and it’s pitch-shifted to +1.7 st., which adds a slightly different tonality to the sound. 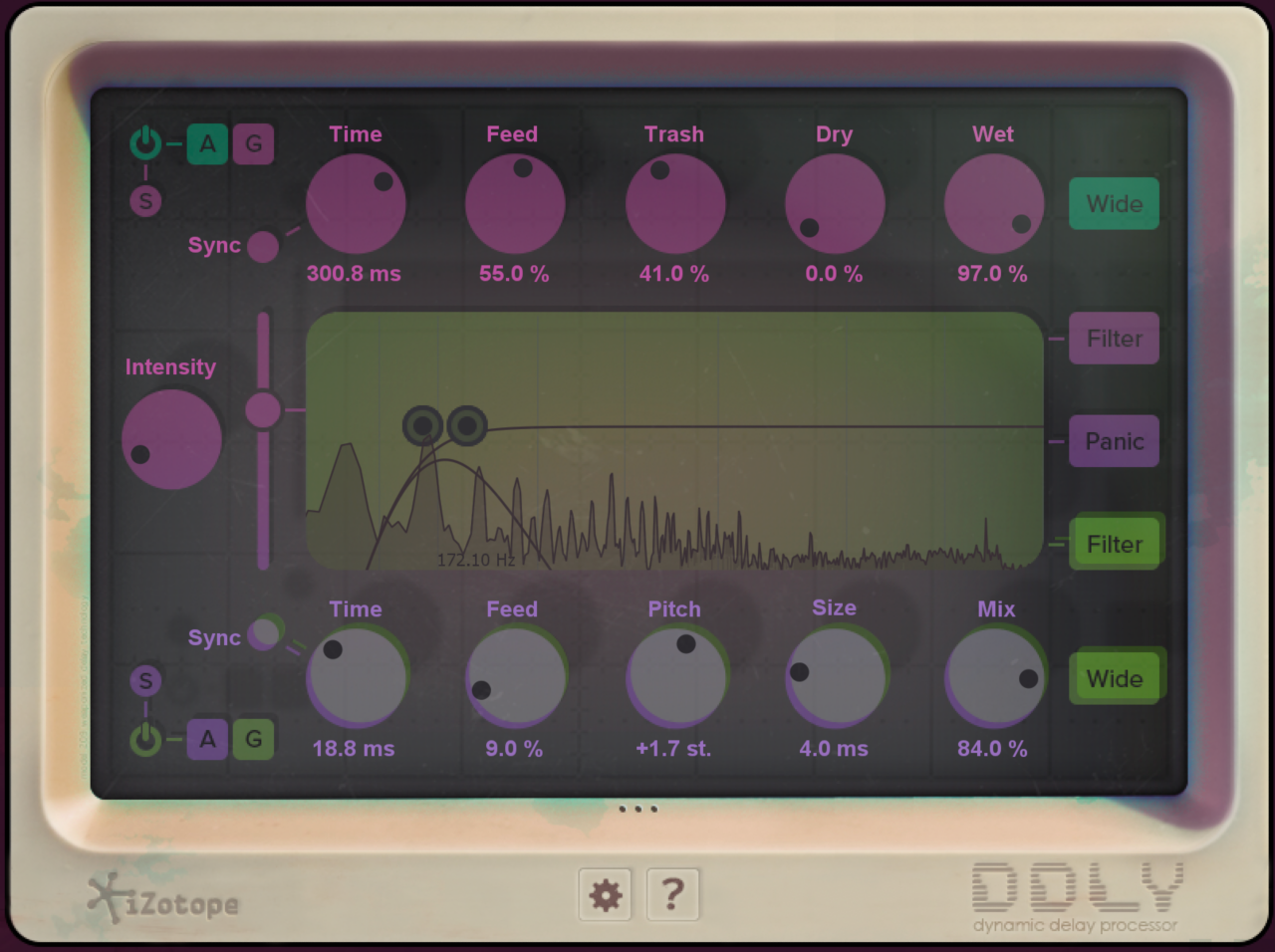 In shoegaze, many musicians focus on distortion, delay, and tremolo. But don’t forget what is perhaps the most essential shoegaze effect of all—reverse reverb.

Many hardware reverb pedals feature this effect, which does exactly what its name suggests: reverse the reverb signal. On Loveless, Kevin Shields used Yamaha and Alesis rackmount effects units that featured unique reverse reverb algorithms. The interesting thing is that when other effects like distortion and tremolo (or any others, for that matter) are run through reverse reverb, it helps create hypnotic swells.

One can simulate reverse reverb in Ableton Live, but it involves using the sample function, which won’t really work like an effects pedal processing live guitar or synth playing. So you will need to run effects like Trash 2 (distortion and/or an LFO tremolo) and DDLY out of Ableton Live and back in with Aux Send and Return channels.

In this clip, we instead run reverse reverb into Ableton Live with Trash 2 set to Saturate - Blitz distortion, and two separate delays on DDLY to create some interesting tonal juxtapositions. The dry clip features the reverse reverb with the tremolo arm bending, while the wet clip includes DDLY and Trash 2.

Trash 2 and DDLY on Detuned Guitar with Reverse Reverb The first delay is on Analog and set to 1/8 time with 71% feedback, 40% trash and a near-completely wet signal. The Grain Delay is on 1/16th and is pitch-shifted to +1.7 st, and sits at 84% in the mix. Pitch-shifting is another common trick in shoegaze, and this together with the reverse reverb, distortion and the strumming while bending the tremolo arm creates some interesting sonic juxtapositions inside the swells.